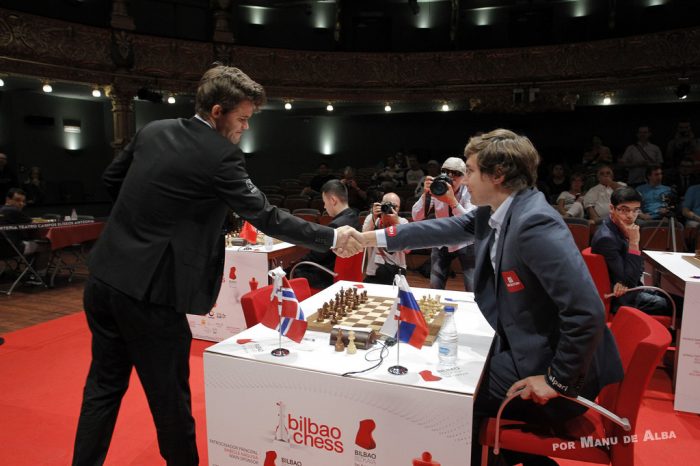 “The cherished dream of every chessplayer is to play a match for the World Championship.” -Mikhail Tal, the 8th World Chess Champion, Tal-Botvinnik (1960)

Just typing the words, “Carlsen vs. Karjakin”, brings me excitement. World Championship matches can change history, creating many of the greatest games ever played, showcasing the fascinating struggles and stories of the players, and inspiring timeless literature. And, this is the match of my generation, of two players I can relate to.  Carlsen’s playing style has a magnificent clarity, unaffected by the age of over-reliance on opening preparation. He’s known for his ability to press for a win long after most grandmasters would’ve shaken hands peacefully. Because of this, he single-handedly raises the percentage of decisive games in every event he competes in. And then there's Karjakin, the player with endless determination. I remember watching Karjakin fight his way out of his ‘win-at-all-costs’ 0-2 deficit against Peter Svidler in the final of the 2015 World Cup. Even back then, I knew---every move he made envisioning the seat across the board from Carlsen in New York. It’s fairly established that Carlsen is the match favorite with odds ranging as high as 7 to 1. Yet, odds are simply a reflection of what’s happened previously, not a concrete prediction of the future. As we've seen whenever someone achieves an upset victory against a titled player, odds can play little role in the course of a singular struggle.  What it’s going to come down to is: What are the comparative strengths and weaknesses of each player? And, which player will be able to lead the games towards positions where they excel? Let's take a look at who has the advantage in each key aspect of a chess game, starting with the player's assessments of each other:

Magnus is a great player. He has a lot of strong skills. He is a brilliant technical player. Also he fights for the initiative very well. He sees tactics excellently. So he doesn’t have many weaknesses. But still, he is a human, not a computer, and he also sometimes makes mistakes and loses. So I will study his games hard and try to find any weaknesses if I can. -"I am not afraid of Magnus"

"Karjakin is defensive, tenacious and has a great ability to find positions he can defend even if they may look ugly.”  -"Inside the home (and mind) of World Chess Champion Magnus Carlsen"

Recently, I came across a position from Karjakin vs. Ivanchuk (Loo 2013) while solving puzzles in Grandmaster Preparation: Attack & Defense. To my surprise, Karjakin was on the attacking side. As I was solving the exercise, I thought: A rare treat, an attacking game by Karjakin! After I wrote down my guess, I turned to the solution page and found this explanation by GM Jacob Aagaard:

“Karjakin overlooked two very nice wins in this game. In the last few years, his technique has improved, but his tactics have declined. I think? In the game, Karjakin played the standard 27. Nd3? with a slight advantage. The game was drawn ten moves and a few mistakes later.”

The assessment that Karjakin's "tactics have declined" is very rare in regards to a 2750+ player, but not surprising. Many of Karjakin's recent games seem to favor resilience and carefully converting a safe edge into a win. Can you find what Karjakin overlooked?

"Include all the pieces in the attack." -GM Jacob Aagaard

In Carlsen’s first classical victory over Karjakin, Karjakin attempts to build up an attack on the kingside, but Carlsen takes over the center and shuts down the attack before it even leaves the ground. In one of the variations, Carlsen comments that it, “stops any illusions of a white attack”.

“When Karjakin initiates an attack, it usually backfires no matter how promising it looks.”

Carlsen, on the other hand, is a very versatile player, ready to attack if the position calls for it. In one of their most recent encounters at Bilbao Masters, Karjakin equalized comfortably in the opening. Yet, Carlsen was able to gradually build up a very strong attack against Karjakin’s king.

“If you want to become the best, then you have to know all the opening setups and theory. That is what I think.” -Sergey Karjakin, "I am not afraid of Magnus"

Karjakin often relies heavily on home opening preparation to gain an advantage against an opponent. Contrastingly, Carlsen’s style seeks a reasonable, sometimes even slightly worse position (if playing Black), where he can gradually outplay his opponent in the middlegame and endgame.

I think to win the match, Karjakin needs to take Carlsen out of his comfort zone. He needs to play very sharp openings and take huge risks. The problem that Karjakin faces is that everything he does well, Carlsen does well too. Karjakin is a good grinder, Carlsen is an even better grinder. Karjakin is an excellent defender, Carlsen’s defensive skills are out of this world. You can see the problem that the Russian faces in that respect. The good news for Karjakin is that he does have one ace to play---he’s very good with White. -GM Danny Gormally, Carlsen vs. Karjakin: Who Will Prevail?

For example, in Karjakin's first ever victory against Anand at the Candidates Tournament, he uses a novelty to make Anand's position uncomfortable, by encouraging weakening moves on the kingside:

“Success with openings will be a crucial part of his [Karjakin’s] match strategy, and he has a great team in place to make that happen. -GM Jon Ludwig Hammer, Carlsen’s second during his two World Championship matches with Anand, "Carlsen-Karjakin: Hammer's Preview"

“What I think are Magnus Carlsen’s three greatest strengths are his versatility, his unpredictability, but, maybe most importantly, his skills as a grinder… What do I mean by grinding skills? Basically, I define grinding as being able to outplay your opponent from a seemingly equal position and really putting pressure and managing to get the most of your positions.”

In his video, Why Magnus Will Defend His World Championship Title, Hammer analyzes Carlsen vs. Karjakin at Tata Steel in 2013, starting from a position the computer evaluates as equal on the 15th move. Watch how Carlsen carefully improves his pieces, emphasizing his bishop pair, and induces weaknesses in the Karjakin's position, until he has an overwhelming advantage. Here is the game:

“In static positions (and especially in endgame positions where not many tactics can be found), Carlsen has a huge edge thanks to his trademark squeeze.” -GM Gregory Serper, "Carlsen vs. Karjakin: The Final Countdown"

According to Karjakin himself, counterattack is one of his main strengths, and he’s hoping to utilize it during the match:

"If he tries too hard, I can beat him on the counterattack. That's my plan."

To demonstrate Karjakin's counter-attacking skills, GM Gregory Serper, in "Carlsen vs. Karjakin: The Final Countdown", looks at the following blitz game, Carlsen-Karjakin, Tal Memorial Blitz 2008. After Carlsen's 24. e5 pawn thrust, Karjakin is able to activate his pieces and take control of the position.

However, Carlsen also has confidence in his ability to counter-attack at the optimum moment:

"I can’t count the times I have lagged seemingly hopelessly far behind, and nobody except myself thinks I can win. But I have pulled myself in from desperate [situations]. When you are behind there are two strategies – counter-attack or all men to the defenses. I’m good at finding the right balance between those."

Both players are known are their immense will power, and this may turn out to be the deciding factor: Who can maintain their highest level of chess and make rational game decisions despite the strain and pressure of a World Championship match? It can be especially stressful to play against the same opponent day in and day out:

"You see, in a match there are no other competitors, no outsiders and a chessplayer cannot plan in advance from whom he will win without fail, with whom a draw will be sufficient and (as often happens!) to whom it will not be shameful to lose. The cost of each point in a match in comparison with a tournament grows twofold: if one chessplayer wins, then his rival automatically loses, and therefore match games always evoke a greater feeling of responsibility." -Mikhail Tal, Tal-Botvinnik (1960)

Will Karjakin be able to bring out the iron nerves that he showed at the 2015 World Cup?

Will Carlsen show the same determination to win that he had at Bilbao Masters this year, where he recovered from his first ever loss to Hikaru Nakamura by going on to win more games in the tournament than every other player combined?

Carlsen vs. Karjakin: Who Will Prevail? 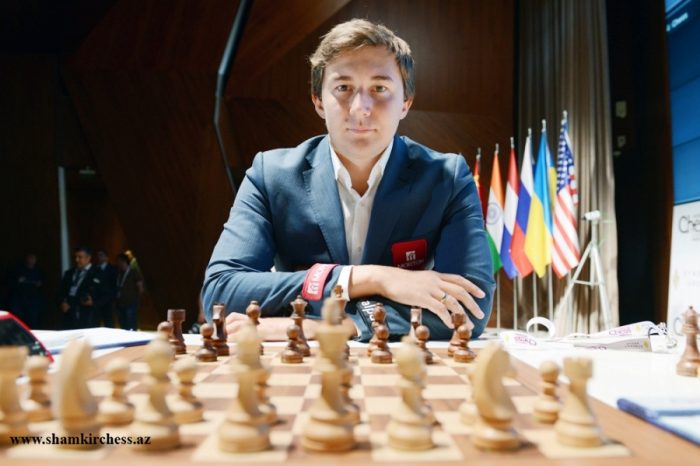 "I still think he can be beaten. No one is unbeatable." 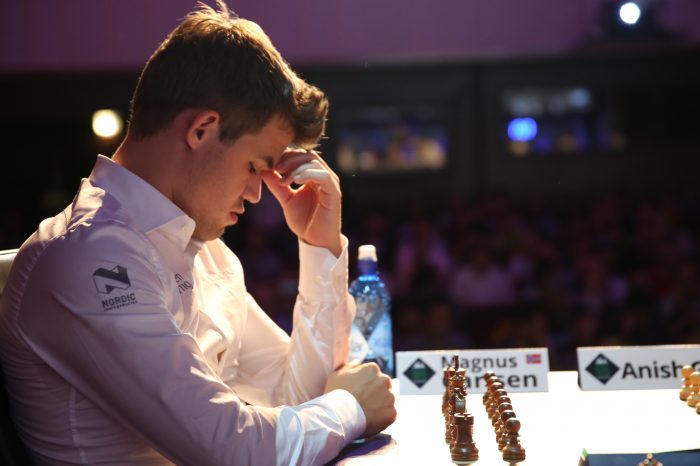 "Some people think that if their opponent plays a beautiful game, it's OK to lose. I don't. You have to be merciless."