Carlsen Faces Kramnik in the Finale of Qatar Masters 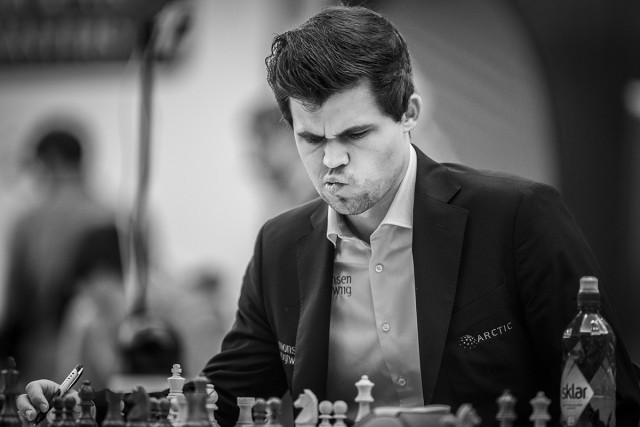 World Champion Magnus Carlsen, Photo David Llada
Over the course of 2015, Magnus Carlsen has shown an incredible amount of tenacity: Over and over, he's managed to recover after disappointing performances. Carlsen began Qatar Masters with a less than ideal start, drawing against International Master Nino Batsiashvili, who is rated over 300 points below him. None of this has been evident in Carlsen’s play since, though: Leading into the final round, he is the clear tournament leader. To get there, he defeated Shakhriyar Mamedyarov in just 25 moves with black. Carlsen described the game as, “I made some natural moves, and his position collapsed, basically… When you kind of need a win, playing an aggressive player with black is nice, although it's dangerous as well." Vladimir Kramnik and Yu Yangyi, last year's champion, trail behind Carlsen by half a point. Kramnik won a five hour fighting game over Sanan Sjugirov. Yu Yangyi was the only other decisive round 8 result on the top 10 boards, defeating Nils Grandelius.

Show Solution The tournament finish is far from set in stone as Kramnik will have his chance to face Carlsen head-to-head with the black pieces in the final round. Before it was official, Carlsen mentioned that this was his pairing preference: "I’d like to play Kramnik, of course, if he’d need to beat me with black." Kramnik, on the other hand, was more neutral: "To play Magnus would be very interesting. I always enjoy playing with the best players. It will be maybe more difficult, but more interesting." When asked if his minus one score overall score against Carlsen would affect the game, Kramnik responded, "Well, actually, my score is one of the best, you know, against Magnus compared to others. I mean I’m only minus one, which is not that much. And I was recently even plus one. I’m doing much better than Nakamura, for instance. So, no, I don’t have any psychological problem with Magnus, it will be just a game." Meanwhile, Yu Yangyi will have the white pieces against U.S. # 3, Wesley So. Yu is in a similar situation as last year, where entered the last round a half point behind the leader, but managed to pass him with a victory. Watch live games and commentary of the final round by Peter Svidler and Alejandro Ramirez on the Official Qatar Masters Website.
SHARE: