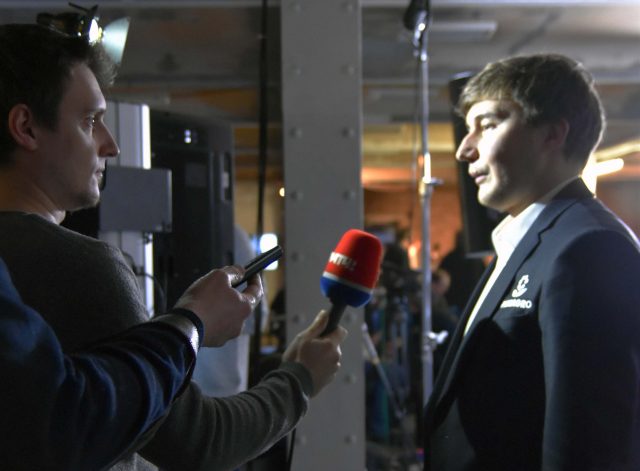 The FIDE Candidates tournament was blasted wide open in round 12 in Berlin. Both leaders, Fabiano Caruana and Shakhriyar Mamedyarov were defeated, leaving five players in the hunt with two rounds to go.

Shakhriyar Mamedyarov lost early in the day to Ding Liren, who spotted a nice and unusual defensive sequence- Shak was able to invade with queen, bishop and rook, but to no avail.

Meanwhile, it looked as if Fabiano would have a chance to keep the lead with a draw. But, Sergey Karjakin’s exchange sacrifice was too much for Caruana to defend. Caruana was beaten by what Karjakin called, “Top Secret” preparation against the Petrov. It was a must win game for Karjakin, allowing him to get to +2 tied for first place with Caruana. This feat is quite incredible as Karjakin started with an abysmal 1 out of 4. He has battled back strong scoring 3 wins in the past 5 rounds. Caruana said that he did not realize how good the exchange sac was for Sergey until two or three moves later when he “saw the position from the White side.”

Today was definitely bad for Caruana but it could have been worse as his closest rival, Shakhriyar Mamedyarov, also lost to Ding Liren.  In round 11, Ding missed an easy win against Grischuk and when asked if he could have dreamed to beat Shak with Black he said, “No, I have not beaten Shak before.” Well, today was the best day for this win as he pulls even with Shak and Grischuk (6.5) with all three trailing Caruana and Karjakin (7) by only ½ a point.

My main purpose in Berlin is for our documentary, Berlin 2018, and we are getting incredible footage of all the action. My favorite part is being able to get up close and personal post game interviews after ever round. I had a great moment after round 10 with Caruana where he gave great advice for young players. He said, "If they really love chess then I say they should work on it. Play a lot and maybe one day they will make it to the top."

We've also been treated to some excellent side events. Chess Boxing Global was gracious enough to invite us to their Intellectual Fight Club event. I had a great conversation with the founder, Iepe Rubingh (pronounced Eepa), about the combination of these two great sports. He said, “In a way it is very natural to have this mental and physical aspects.” 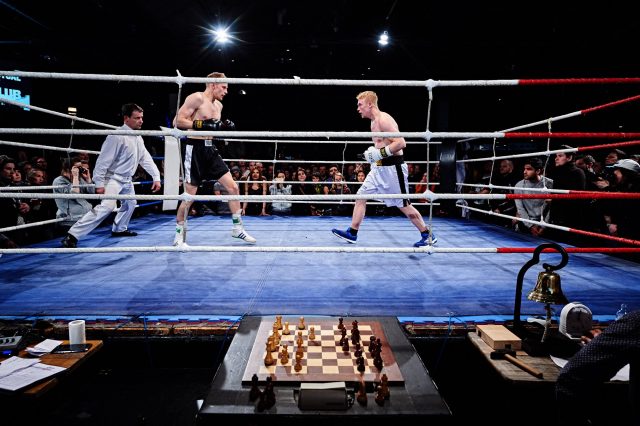 It definitely was a combination of both with the boxers duking it out and then plopping a table and board right in the middle of the ring. The main event was incredibly exciting as we were able to see the local German hero, Sven Rooch, win the match with a nice checkmate. 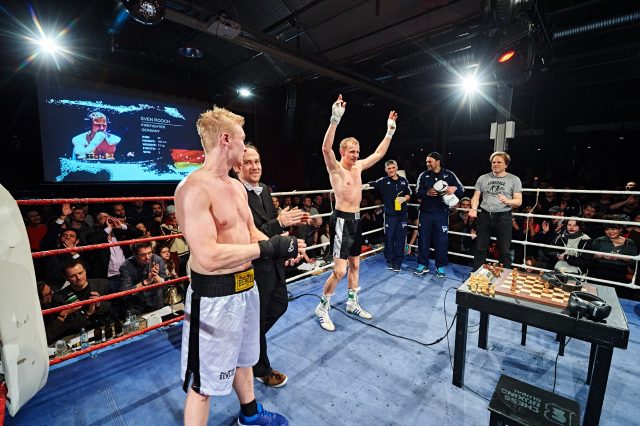 Tomorrow is a rest day but no rest for the Berlin 2018 team as we are going to the Wine Chess Battle put on by a collaboration between Art Russe and the Chateau La Grace Dieu Des Prieurs from Bordeaux. Art Russe lent their name and quite a few famous Russian paintings to use as labels for the vintages. They were gracious enough to allow our team to join in a wine tasting today after which I was soundly beaten in a complex endgame by one of the sommeliers that will be competing tomorrow.

US Chess readers will join me in wishing Fabiano Caruana plenty of rest to get ready for the final two rounds. 17 out of the 48 games have been decisive so there is no doubt it will be an exciting climax!

Watch the Candidates last two rounds on Monday, on a variety of channels covered by GM Rogers, as well as Today In Chess, hosted by the Saint Louis Chess Club.