Like many chess players, IM David Brodsky learned how to checkmate with just a knight and a bishop early in his chess career. But it wasn’t until the National Chess Congress, held in Philadelphia over Thanksgiving weekend, that he actually had to do it during a tournament. 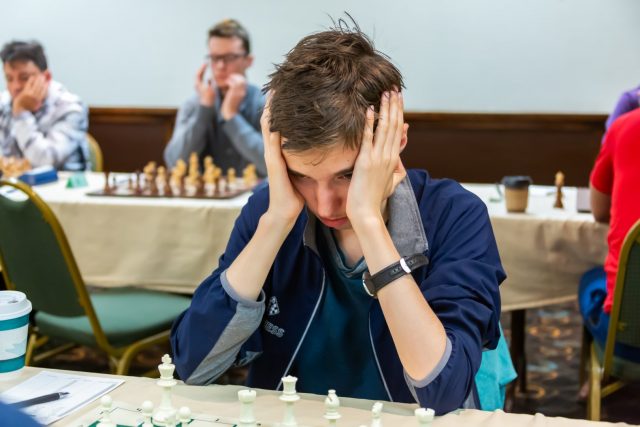 David Brodsky (photo Hanks)
“I had it in storage for a while,” Brodsky said of the knowledge of how to checkmate with a knight and bishop, which he ended up having to do in the final round on Board 2 against FM Jason Liang. “I was never worried that I wouldn’t be able to achieve it.” Brodsky won the National Chess Congress on tiebreaks Sunday, having scored 5.5 out of 6 points along with GM Andrew Tang. Tang said the interesting thing about winning first place is that he hasn’t really been studying chess since he began his studies at Princeton University earlier this year. “It’s funny because since college started, I haven’t looked at chess much but my results have been fabulous,” Tang said. “It’s strange. Maybe taking a break was good.” Tang said his most critical game came during the final round – Round 6 – against GM Magesh Panchanathan. 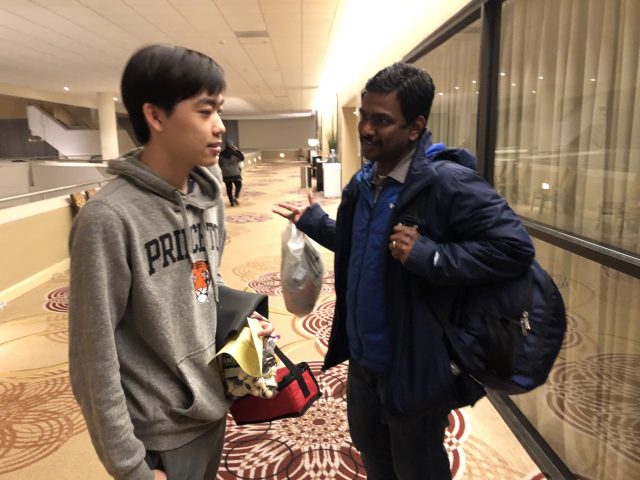 Tang and Panchanathan after the game (photo Jamaal Abdul-Alim)
“In the first four rounds, my pairings you could say were a bit fortunate,” Tang said. But his final round, he felt was a challenge because he had Black against a fellow GM. “So it was definitely a critical game,” Tang said. “I thought I was doing pretty well throughout the game,” Tang continued. “I’m not sure what was happening in the opening. But pretty quickly I won an exchange.” Brodsky said he got “fairly lucky” early on in the tournament. “Round One should have been a draw,” Brodsky said of his game against WIM Evelyn Zhu. “She defended pretty well but in the end she just blundered. “Then Round Three I was in big trouble. I offered a draw at some point but he turned it down,” Brodsky said of Samrug Narayanan. “I ended up winning. He fell for one trick in the position and that was just it. “Basically instead of recapturing the piece like normally, I took a pawn and got an attack against his king. I didn’t have to recapture. He missed some detail.” Brodsky, who is in his senior year in high school in Westchester County, New York, said he plans to study computer science. In terms of a career, he plans to study “maybe something to do with data science, big data, something like that.” “But I still have plenty of time to decide.” Brodsky – a protege of GM Farrukh Amonatov – said he didn’t do any special preparation for the National Congress. He said he puts in about an hour of study per day. Tang said he’s “not totally sure” if he will stick with math. He turned 20 years old a day before the National Chess Congress began. He’s only a freshman in college now because he took a gap year in which he “mostly played chess.” Tang said his next big tournament will be at the Pan-Am collegiate games, which is the qualifying event for the Final Four of Chess. He said Princeton has a pretty good shot at making it to the Final Four, listing IM Vignesh Panchanatham, FIDE Master Ethan Li and FIDE Master Kapil Chandran as strong players who can potentially lead the team to victory. “Our average rating is pretty high,” Tang said. “We can compete with any team.” Tang said winning the first place price of $2650 came in handy. “It’s nice. I’m a college student,” Tang said. Brodsky won $2750 – collecting a $100 bonus after winning on tiebreaks. FM Jason Liang found himself within striking distance of first place at the National Congress. Defeated by Brodsky in Round Six, Liang still tied for first place among under 2400 players in the premier section. “I think this is the biggest prize I’ve ever won,” Liang said of his $1350 prize. Liang, a student of GM Alex Lenderman, said he didn’t do any special preparation for the tournament but that he looked at the games of opponents prior to each round in order to learn more about their style. Did it pay off? “Kind of I guess,” Liang said. “I didn’t get like trapped in the opening or anything like that.” Liang also won against two GMs – Alexander Stripunsky and Elshan Moradiabadi. Stripunsky didn’t assign too much meaning to his loss against Liang but said Liang “played well.” “I made a stupid blunder, so it was my fault,” Stripunsky said. Be that as it may, a win against a GM is a win against a GM. Given the fact that Liang is still in middle school and training under a renowned GM, expect to see Liang steadily rising through the ranks on and beating more GMs along the way. Jamaal Abdul-Alim is a regular contributor to US Chess Online and Chess Life Magazine. When the weather is nice you can often find him at the chess tables in DuPont Circle in Washington, D.C. Follow Jamaal on Twitter @dcwriter360.
SHARE:

Panchanathan-Tang white could take 16. gxR(h8) queen pinning the remaining black rook with threats of his own. Is this better than 16.Bxe3?
Agree that 16.gxh8=Q makes sense, although I would still rather be black after 16...Bxf2+! 17.Kd2 Rxh8. White's development is still constipated, and the h4 pawn (at least) is likley to fall.