Life in the Internet age is both a blessing and a curse for chess fans. On the plus side, there is an utter avalanche of top-level tournaments taking place each week, and a maelstrom of new games to study and enjoy. But then the problem of selection comes in – how are you supposed to find the most interesting and useful things to look at when there’s just so much? This problem became very apparent for me this week, when two amazing games were played in tournaments that are getting comparatively little attention, at least here in the States. The first was played in “the best Super-GM tournament you’ve never heard of,” as some sly Twitterati put it, and the second was in the Asian Individual Continental Championship. We’ll check in with both events here, and we’ll do a deep dive into these two stupendous games.

2019 Karpov Tournament, Standings after Rd 6
The 20th Karpov Tournament, held in Poikovsky, Russia, is one of the strongest annual GM round-robins in existence, and yet, very few people outside of Russia seem to pay it any mind! This year’s edition boasts an average rating of 2684, and features the likes of Jakovenko, Wang Hao, Fedoseev, and Korobov. Two of the most interesting players, Vladislav Artemiev and Krishnan Sasikiran, met in round three, and… well, you’ll just have to see it to believe it. The 21-year-old Artemiev is among the most promising talents in chess, and there are whispers that he someday might challenge for the World Championship. Even so, Sasikiran – a four-time Indian Champion and the winner of the 2006 Aeroflot Open – shows his attacking talents here, and the result is a delightful tactical aperitif that stands alone it its own right, but also whets our appetite for what is to come. Artemiev and Sasikiran are in a massive tie for second through ninth (!) place in the Karpov Tournament after six rounds with even scores. Dmitry Jakovenko leads the field by a full point with three rounds to play. If you read Russian, the webpage linked above provides games and updates, but for everyone else, the coverage at TWIC can be recommended. 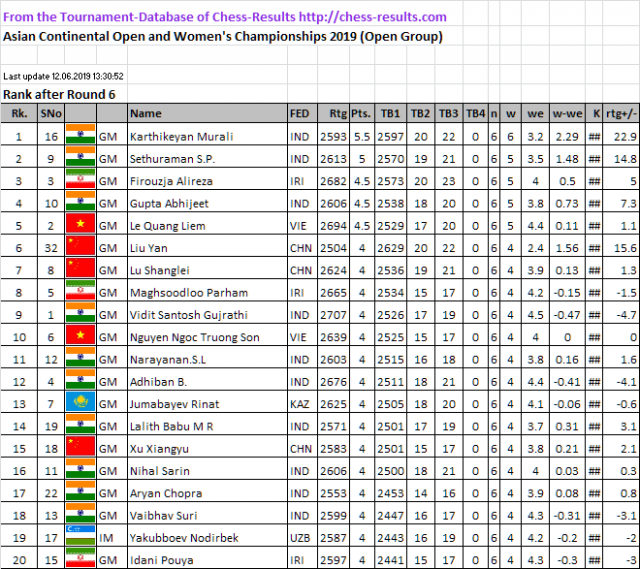 2019 Asian Individual Open, Rd6 Standings
The 2019 Asian Continental Open and Women’s Championships are also underway in Xingtai, China. Here too the field is extraordinarily strong, with Santosh Gujrathi Vidit, Le Quang Liam, Baskaran Adhiban, and young phenoms Alireza Firouzja, Parham Maghsoodloo, and R. Praggnanandhaa among the leading lights. Indian GM Murali Karthikeyan leads the event after six rounds with a 5.5/6 score, and he has had to work hard to do it. In round six he defeated Adhiban, and in round five, he hornswoggled Firouzja with one of the most amazing queen sacrifices you will ever see. It was so astounding, in fact, that Romain Edouard wondered if some tournament transmission links had gotten crossed. https://twitter.com/romain_edouard/status/1138408316533706753 And it’s not just Edouard who was confused. Even the latest development versions of Stockfish misjudge the power of the sac, while Leela Chess (rather impressively) sees the massive compensation. 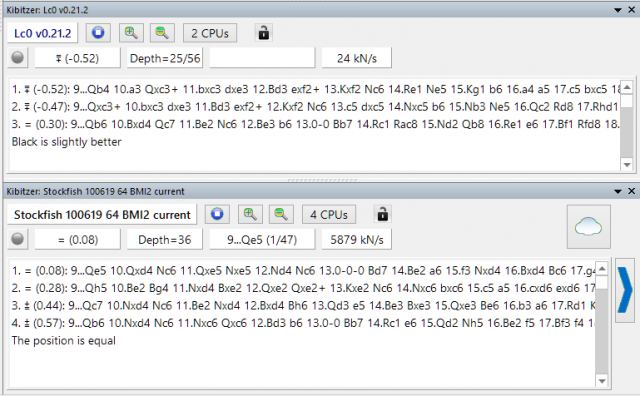 Firouzja-Karthikeyan analysis by Leela and SF for Black's ninth move
By itself, the queen sacrifice would make this game worthy of your time and attention, but the way that Karthikeyan followed it up, making slow but steady use of his compensation, is fascinating. This has to be a contender for game of the year. There are three rounds to go in Xingtai. Karthikeyan plays fellow countryman Abhijeet Gupta tomorrow with the Black pieces, while second-place S.P. Sethuraman takes Black against Firouzja. Games are available daily at the link above.
SHARE:

Wow! Just amazing. Thanks for sharing these wonderful games, John.