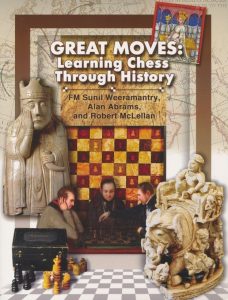 If you wanted to find a chess problem or puzzle book, you could do so with ease. Same goes for a chess history book. In the newly released "Great Moves: Learning Chess Through History,” readers get the best of both worlds. Of the 28 books that comprise my personal chess library, there isn’t one quite like this new gem by FM Sunil Weeramantry, Alan Abrams, and Robert McLellan. I would describe it as something of a cross between my all-time favorite chess book, “The Immortal Game: A History of Chess,” by David Shenk, and, say, your favorite problem or puzzle book. At the same time, “Great Moves” is kind of in a league of its own. It’s also a must-have — and the perfect gift — for a chess educator or chess parent. Written for students who read at a minimum fifth-grade level — but certainly still informative and entertaining for those who read at higher levels — this book takes readers from the earliest days of chess and its origins as it spread throughout the world, through the 19th century reign of the great Paul Morphy, whom the book describes as “the first true prodigy in chess.” With pictures and diagrams interspersed throughout, readers are treated to fascinating facts along the way — some well-known and others less-known. For instance, the book reveals the history of castling by describing its forerunner, which was known as the “King’s Leap” and goes back to the time when Arabs were popularizing the game during the latter part of the first millennium. It credits Ruy López de Segura, of 16th century Spain, with suggesting that castling become a standard move in the game, as well as the touch-move rule and the 50-move rule that still govern how we play today. Enthusiasts of the Evans Gambit will be delighted to learn details about the interesting life of the move’s namesake, Captain William Evans, a seafarer and inventor who — like other early chess greats — died in poverty despite having contributed much to the game. As a chess journalist, I was particularly impressed with how the authors cited various newspaper articles to flesh out the histories of the chess personages — and chess “machines” — from the days of old. For example, when discussing the famed Automaton — a mysterious chess “machine” that first appeared in the 18th century and was actually operated from inside by a master chess player — the authors cite one particular newspaper article in which two young boys from Baltimore are said to have climbed a roof where they apparently solved the mystery of how the machine worked. “From their lofty perch, they could see behind the machine and said they had seen (William) Schlumberger) coming out of the back of it,” the book states of the strong master player and former instructor at the Café de Régence who came from Europe to be the famed machine’s new operator at the time. “Their story was reported in the Federal Gazette newspaper on June 1, 1827.” Talk about a chess scoop. The authors also invite readers to do research on their own. For instance, in the same section about The Automaton, they encourgae readers to search the Internet for a video that shows a replica of The Automaton. I took them up on the invitation and found  this"> video. Another feature I like about the book is that it respects the intelligence of the reader and provides the reader with opportunities to figure out what a given player, say, Morphy, might play in a particular position, instead of just recounting the games in their entirety. For instance, the book recounts a blindfold skittles game between Louis Paulsen and Paul Morphy played during the American Chess Congress in New York in 1857. “Morphy now played a brilliant move setting up a forced mate,” the authors write after 23. Qxc7.

Show Solution With such an approach, this book is likely to not only improve the game of just about any amateur or novice chess player who picks it up, but it will also make any chess player much more conversant in the wonderful history of the world of chess. In the hands of a skilled chess educator, it could be a powerful tool to help turn any scholastic chess team into not only tournament-winning chess players but walking encyclopedias of chess. Order Great Moves from US Chess Sales, and use the code Holiday before December 17th for 20% off your order.