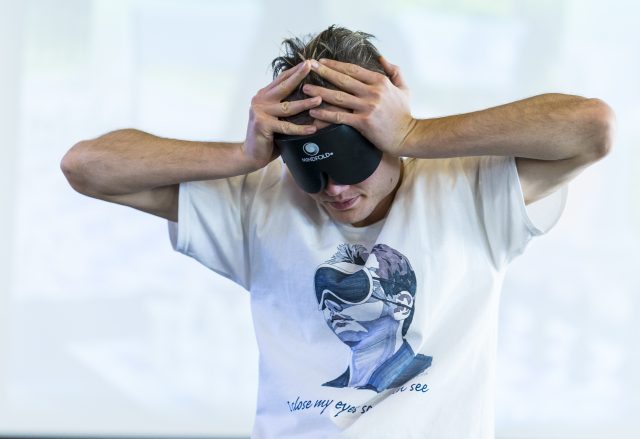 That point had been reached. The point where a chessplayer is so tired that he can't think clearly and just wants it to be over. Andrew McGregor, aka, "The Chess Boxer" had reached that point, and he was amazed that GM Timur Gareyev was still on his stationary bike, pedaling away and calling out moves. "After 19 hours, I was almost delirious and had many thoughts, some of which were actually about chess!" McGregor said. He continued "I was a pawn up in the endgame, but instead of focusing on the game, I was having a wide range of thoughts like 'Maybe I should just resign,' and the counter 'Timur took a day of my life, I'm going to beat him for that!' " 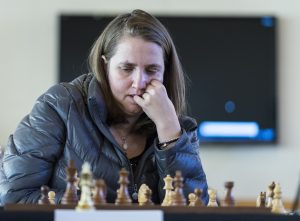 Simone Sobel, a near-Expert from L.A. commented "What he did was truly remarkable. Everyone was just in awe and so excited that he achieved a fantastic goal! I'm just happy that I was able to play such an interesting game against the Blindfold King!" Sobel drew her game in the 18th hour. Sobel's tone was echoed all throughout the event, from the first move at 8:20am to the final resignation, over 19 hours later. Timur actually played (or took 5-minute breaks) for only 18 1/2 hours if you don't count the 30-minute delay caused by a fire alarm (triggered by Timur's personal chef, who was cooking up creative mini-meals for Timur all day long!). 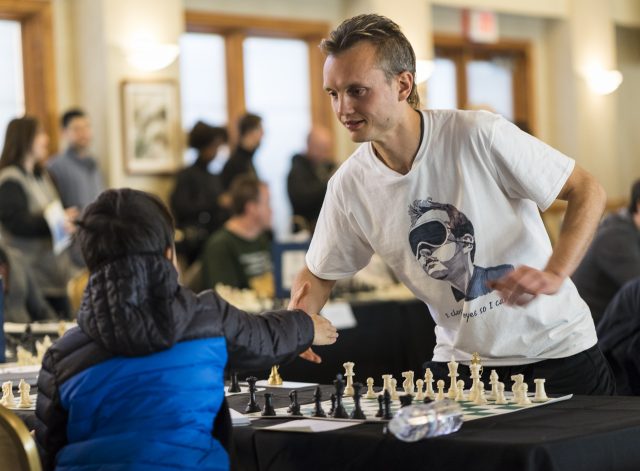 In 2011, FM Marc Lang of Germany broke GM Miguel Najdorf's 64 year-old record, by playing 46 games simultaneously over 21 hours and 9 minutes. Timur's mark of 48 (35 wins, 6 losses, and 7 draws) eclipsed that mark in every respect (amount of games, time needed, strength of opposition, and win percentage). Of his 48 opponents, a remarkable 20 players were rated 1800 or higher and Timur hit the percentage goal that he had hoped for (80%).

Find all the games here on chess24. The Accusation After about five hours, one of Timur’s opponents, apparently in disbelief that he could really be doing this, approached NTD Tom Brownscombe and told him that he should check a device that was wired to Timur's back. While the organizers all knew that it was his transmitter (not receiver) for the Twitch TV broadcast, we realized that others would surely be wondering the same thing in light of this unbelievable feat. After several discussions with the organizer, Jennifer Vallens and myself, we had Marc Cobb, Timur’s close friend and travel companion, approach Timur. Surprised by the interruption, Timur graciously allowed himself to be walked out of the room, where they then removed the device for inspection. I showed my transmitter (I was doing the commentary on Twitch TV) and it was exactly the same as Timur’s. 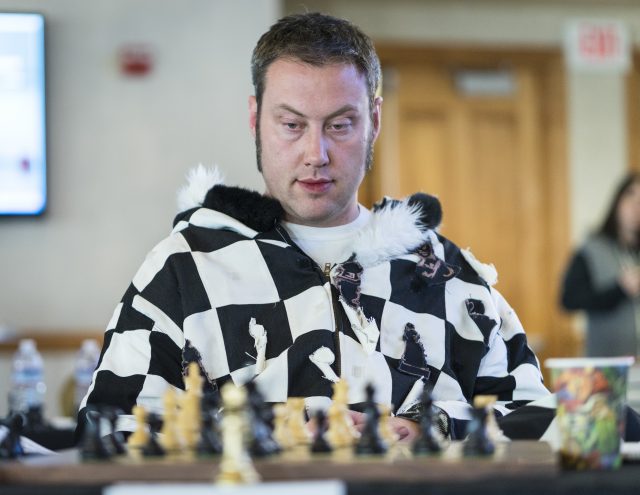 After his game, I interviewed him on Twitch and he said that he was just wondering because he saw the wire, but that he did not believe that Timur was getting any help “because sometimes he would make really bad moves against bad players.” There were numerous interviews throughout the day, including Andrew McGregor (“The Chess Boxer”) and Ibn Cason (brother of former heavy weight boxing champ Hasim Rahman), FM Elliott Liu (Nevada State Champion), Timur’s mother, and 20 or so others! 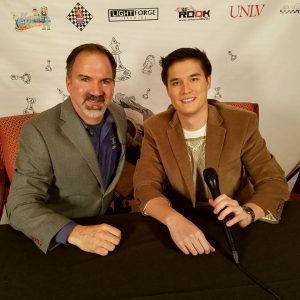 In one of the most popular interviews, FM Ron Gross, an 80-year old friend of the late Bobby Fischer, excitedly compared Timur to George Koltanowski. "He (Timur) loves to play, and enjoys sharing his talent, just as Kolty did all those years ago." The event was flawless, which is amazing considering that Jennifer Vallens (of OffDaRook Entertainment) threw it together in two months once the date and venue were confirmed. Timur himself arranged for the Twitch production (thanks to Ryan and Keith Ray of Killer Dutch Agency – no relation to the opening), game broadcasting on multiple chess websites (thanks to Lennart Ootes), ten DGT boards (half from Al and Janelle Losoff of National Open fame and half from the Las Vegas Chess Center), fantastic healthy foods (by Joe Bullock of Joe’s Magic Foods), equipment rentals from LightForce and SSP in Las Vegas. Thanks to Juan and Sabrian Jauregui of the Las Vegas Chess Center for all their help in promoting the event and holding practice events for Timur leading up to this big challenge. Very special thanks to Joe Sly of the UNLV Foundation Building, which served as nothing less than the perfect venue for the event. 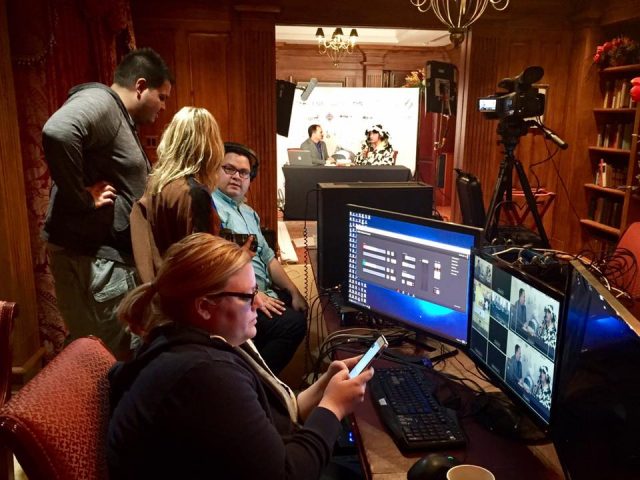 Behind the scenes of Blindfold Chess, Photo Jay Stallings

All participants received tea and coffee all day, and a visit by a popular food truck, plus  a swag bag that included complimentary blindfolds (the same model that Timur used) donated by Mindfold. Speaking of blindfolds, there will be an auction soon for the autographed blindfold that Timur used during the event. 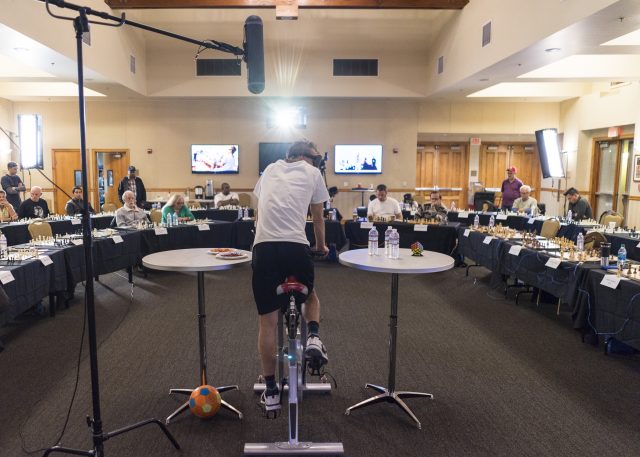 After the event, Timur said that he wanted to go back to Uzbekistan to bring his blindfold ability to his home country. He planned to visit Russia and Europe as well. While he was a little wobbly after the event, I think it was mostly due to the approximately 50 miles he rode on the stationary bicycle over the 18.5 hours! FM Marc Lang sent a note to Timur after the conclusion of the event: “Congratulations on beating my World Record – or better, blowing it up :) . Great job and fantastic performance. I’m pretty sure that this time it (the record) will last much longer. Best, Marc“ Congratulations to GM Timur Gareyev – World Record for Simultaneous Blindfold Chess Games (48)! Jay Stallings is a US Chess Expert and FIDE Trainer. He has an app for players rated under 1000 (Coach Jay’s Chess Academy), a podcast (“Chess Chat with Coach Jay”) and his curriculum is used by chess coaches worldwide. Follow Timur's adventures on his website, facebook and twitter. Find full game list on chess 24.