Blindfold in Idaho: "I Feel Sorry if You Missed it." 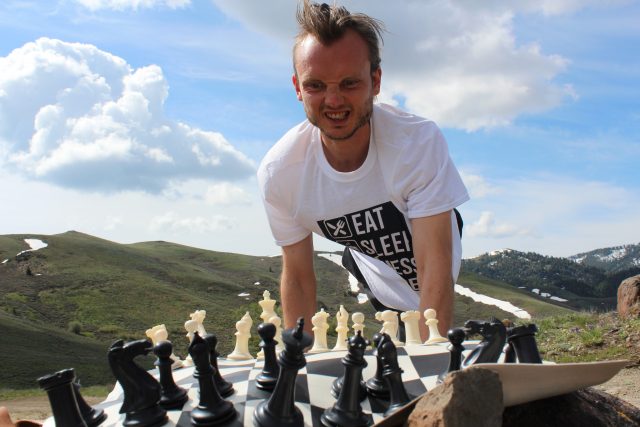 I was thrilled when the new Blindfold World Record holder, GM Timur Gareyev, was excited to accept the invitation to instruct, demonstrate, and exhibit in Idaho.  An added incentive for Timur was the Perrine Bridge in Twin Falls where base jumping is available with very few restrictions. Timur was hoping to organize with jumpers for a future visit.  This trip would feature chess in Boise, Sun Valley, and Twin Falls and was sponsored by the BCSD Chess Club. On Thursday, May 18, ICA Website Coordinator, Desmond Porth picked up GM Timur at the Boise airport.  Their first stop was Memorial Park where 18 players were able to play their first blindfold chess games using techniques described by GM Timur.  The Memorial Park in Boise houses under-used chess tables and the venue proved to be a winner with chess and nature - despite the chilly weather.  David Lucky, Idaho’s Champion and top player, received GM Timur at the park and looks forward to another meeting in the near future. 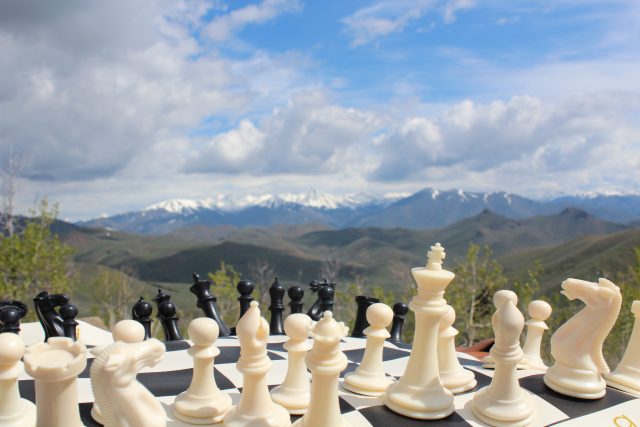 Two and a half hours later, GM Timur was reunited with me (ICA President Adam Porth) at my house in Bellevue.  The previous week, Timur trained the BCSD Chess Club Middle School chess team while attending Supernationals.  The Porth household is a virtual zoo with Timur also greeting each dog, cat, chicken, “skinny” pig, canary, snake, and rabbit with giddy petting and hugs. Timur is enamored with nature and Idaho is the perfect place for integrating chess with it.  Timur was able to visit the Sun Valley ski area, Galena Summit, Muldune Canyon, the Big Wood River, Carbonate Mountain, and other places where chess boards were whipped out for quick games between “ohs and ahs” and camera clicks. Timur even discovered Bear Tracks! 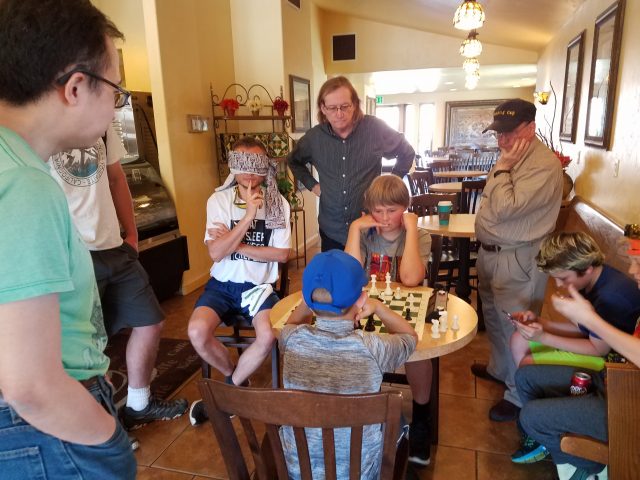 The next day, Timur visited the first Big Picture Learning school in Idaho, Silver Creek High School.  GM Timur participated in a Socratic discussion about Geography and shared knowledge of Uzbekistan and Kazakhstan.  During this question and answer time, GM Timur interjected and modeled his memory techniques.  “[He] really got the kids to begin visualizing.” Beginner chess players listened carefully to his instruction and stories.  Dartanyon Ratcliffe put on his teaching hat while Timur donned his student hat and Dartanyon taught a lesson using sign language.  Sign language chess- that’s new!  The day progressed with chess puzzles, endgames, visualizing moves, and Paul Morphy vs. Alonzo Morphy analysis.  SCHS students then brought GM Timur up a mountain to a defunct cistern and contributed to the graffiti, albeit, chess quotes and chess art! 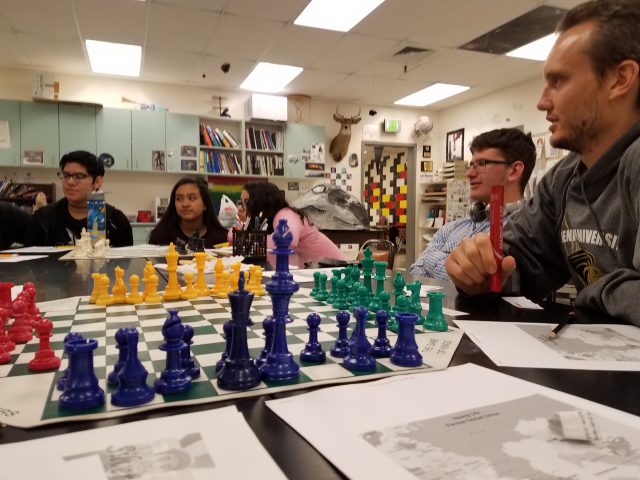 Students were engaged the entire weekend.  One student designed a vegan diet and a brain-healthy menu for his weekend stay.  This helped her earn credit in her health and science courses.  Another student explored the physiology of Timur by evaluating heart rate, body temperature, and respiration using a data logger while playing his blindfold simul.  Principal Mike Glenn indicated, “Having Timur here was an amazing experience for our school and our students.  He taught students how to look at things differently - how to think.  Timur’s lifestyle was motivational,”  he continued, “fitness, diet, habits, and an active lifestyle was inspirational for our students.”  He showed that chess offers more than entertainment or “wood-pushing.”  Silver Creek High School is for alternative learners and at-risk youths in Blaine County (i.e., teen moms, homeless teens, delinquency, drug issues, PTSD, stressed teens, etc.).  Chess programs and celebrities visiting schools like this are important for students. After school Timur continued to teach endgame lessons to the BCSD Chess Club.  He then jogged all the players to a downtown yoga studio (IdaYoga) and convinced all to attend dinner at Globus Asian-fusion restaurant in Ketchum.  When I arrived to pick Timur and everyone up for dinner, they were all doing headstands in someone’s yard near the Yoga Hut!  After dinner, chess continued on Galena Summit during the sunset overlooking the Sawtooth Mountains. As exhausting as Friday was for me, Timur was up at 5 am making “power-smoothies” in preparation for the blindfold simul.  It was in my kitchen when Timur exclaimed, “Today, I will set a record for blindfold Chess 960!”  After an ATV ride up Muldune Canyon, chess and nature merged with a view of the Whitecloud Mountains.  Timur drove down the mountain.  Don’t ever let Timur give you a ride down a mountain as your face will tingle with panic and your knuckles will turn white as you hold on for dear life!  I guess this was good preparation for the afternoon events. The simul began with beginners being taught how blindfold Chess 960 Blitz works.  Bursts of applause demonstrated the enthusiasm of the 25 spectators after each 5 minute game.  What’s more, Timur encouraged players to try it blindfolded themselves.  As each of the ten simul player prepared their board by randomizing their back ranks, Timur spent an hour memorizing the starting positions and having players take turns trying to memorize the starting position of their own boards.  Timur was adorned with a crown of flowers to honor his “blindfold king” status and then began making his way around each board in his mind.  Timur slowly pedaled a stationary bike to help keep his focus and gradually sped up his play as the afternoon progressed.  He spent 3 ½ hours playing and pedalling!  In one game against Dave Zaklan, GM Timur demonstrated his excellent memory by replaying the whole game verbally to double-check a position...twice! 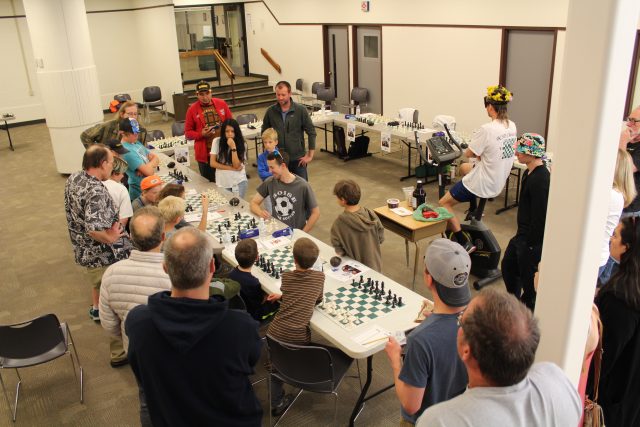 The first casualty was DeWayne Derryberry, a professor from Idaho State University.  Gradually as most players began to fall it was clear that the efforts were exhausting Timur.  He asked for clocks for the last three games.  The games then changed to blitz.  Desmond Porth almost scored a win with two bishops, pawns and a rook against a queen and pawns but then blundered a bishop, initiative, and position following one move under time pressure.  Timur moved in for a kill.  Desmond resigned.  Two players were left.  Caleb Kircher offered a draw which was refused.  Play continued until Timur then offered a draw.  Caleb strategically paused while Timur moved to his game against Carmen Pemsler.  Carmen and Timur drew with less than a minute on the clocks.  Caleb finally agreed to the draw offer by Timur and the exhibition ended.  GM Timur Gareyev earned 8 victories and 2 draws in a Blindfold Chess960 Simul which should be a world record.  Timur indicated that this was harder than regular chess, especially keeping all the boards straight without any recognizable positions.  “There were so many unfamiliar positions,” he described to me. Everyone except Timur vacated the school to the Porth’s house for a campfire and potluck.  Meanwhile, Timur was graced with a massage and energy work by chess-mom and Sun Valley Therapist, Sandy Shepard as a reward for his outstanding work with the kids of our valley.  He emerged looking as fresh as he began the simul and fraternized with players and parents when he arrived at the potluck.  More chess lessons ensued next to the campfire for parents and their kids while Timur laughed and stroked bunnies and rabbits while providing analysis and critiques. On Sunday, Timur mountain biked “Center” and “Two-dog Trails” with SCHS student Phoenix Collins, Professional Biker Billy Olson, and his chess playing son, Otto.  Afterwards, Timur’s entourage traveled to Twin Falls to play cafe chess at Moxie Java Tuscany and see the Shoshone Falls.  More blindfold blitz and mind-blowing demonstrations of grandmaster chess skills had everyone in the Cafe cheering.  Chess on the viewing platform with a couple of stylish Yoga moves had park visitors wondering what was up. 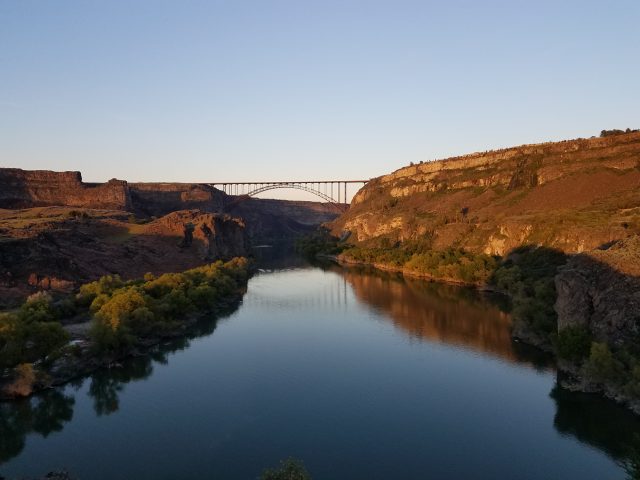 Timur’s trip to Idaho was important as he wants to base-jump the Perrine Bridge in the near future.  So we visited the bridge to watch base-jumper’s in action.   Suddenly Timur and another chess player jumped the fence and scaled the cliffs down to the Snake River where jumper’s land!  I started fretting that ICA would be known as the association that killed Timur.  We picked Timur up safely about a mile down the Snake River Canyon at a park. Over one hundred people were touched by Gareyev’s events.  The energy and enthusiasm of GM Timur Gareyev will always be remembered as the Idaho chess tour was epic to say the least.  As Caleb Kircher put it, “I feel sorry for those that missed it!”
SHARE: