Beyond Winning and Losing 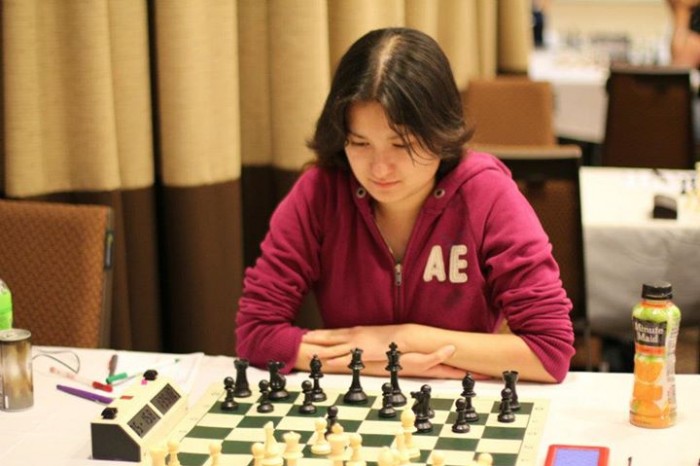 Photo courtesy of Jim Woodward
Why do we play chess? When I was younger, it was clear: to win. I wanted to win my section. I wanted to defeat titled players. I wanted to qualify for invitationals. I wanted my rating to skyrocket to the moon. As my grandfather used to say when the family would play an innocuous game of Yahtzee, “Winning isn't everything. It's the only thing.” I had plenty of tournaments where I was ecstatic because of my performance. But as all chess players know---good, bad, great, and terrible results are all par for the course. During tournaments with mediocre to poor results, I would spend the weekend haunted by some move I should’ve played, some gap in my preparation, or even a pre-game superstition (come on, we all have them...). Looking back, I think I really missed the point. When I see a student feeling down about a tough tournament, I assure them that all that matters is that they’ve learned something and that they enjoyed playing. I know from my own experiences that a low result is no reason to be discouraged, especially when you’re a young and up-and-coming player. In a few months, they’ll have some vast gain in understanding and jump 300 rating points seemingly effortlessly. Despite assuring students of this, I haven't always been very good at following my own advice and often allow my tournament experiences to be defined by the numbers on the crosstable. This tournament (the Western Class Open), I set out with a different approach. Entering the tournament ranked just a few places above last in the Masters section, I wanted to start the event with reasonable goals---goals based on the chess aspect and the actual quality of my games. Before the 1st round, I wrote down a short list of goals aimed at enjoying my games and using the tournament as a tool for improvement.

Let’s see how I did.

1. Shake off the rust from my recent hiatus.

“Chess is two parts: knowledge and playing tendencies. It is impossible to improve one without the other, and playing habits can only truly be worked on within the confines and pressures of a tournament.” -NM Pete Karagianis, “The Struggle”, Chess Life  March 2016 Issue

This goal is like taking a class Pass/Fail. Just by entering the tournament and playing each round, I’ve gotten some practice and remembered what it’s like to be there: opponent sitting across from me, clock ticking down, the stoic feel of the tournament hall looming over every move. Chess in theory is about clarity: You can map out every relevant variation of an opening. You can calculate through every line of a complex tactic. You can carefully examine the subtle technique required to win a theoretical ending. Chess in practice is about fight. At some point, the game goes into uncharted territory. It’s you versus your opponent, navigating through a sea of ideas, variations, complications. Everything that seemed so crystal clear when you were studying at home with Stockfish beside you, offering suggestions and evaluations… is up in the air. I reached the following position after an inaccurate piece sacrifice. My position still has some compensation because Black's pawn structure is fragmented, and his bishop is blocked while my bishop slices across the board. However, with each exchange of pieces, my chances lessen.

While my accuracy was questionable at times, I was fairly content with the activity of my pieces throughout the games.

"When I learned to play chess it really was thought that there’s a best move in every position and you can find it, but now with the appearance and spread of computers it’s become clear to everyone that in many positions there’s a certain number of moves that are equally strong. It’s very difficult to find the golden mean between getting into time trouble and just quickly “bashing out” moves. Sometimes players move quickly – bang-bang-bang, and then it turns out there’s a lot of time left, but it’s time to resign." -GM Alexander Grischuk

This is the area where I need the most improvement. Looking over the amount of time I had left after each move on my scoresheets, there was only one game where I made it past the 30th move with more than 1 minute left on my clock for the remaining 10 moves until time control. In one of my games, having no time left to properly assess the endgame cost me. It’s a double-edged sword though. I don’t want to make weaker moves in my quest to reserve time for later. How does one strike a balance? In his Chess.com article, “Targets, Time Pressure, and Reaching Expert”, IM Jeremy Silman recommends these strategies for improving time management:

"You must take your opponent into a deep dark forest where 2+2=5, and the path leading out is only wide enough for one." -Mikhail Tal

I went overboard on this one, and ended up sacrificing material at least once every game. Trial and error is useful, though---to obtain a better feel for the difference between a fascinating sacrifice full of ideas and compensation vs. an unsound sacrifice. Here's my most unsound sacrifice from the tournament:

On the other hand, in the ongoing Candidates tournament, Levon Aronian showed a lot of creativity when he sacrificed not one, not two, but three pawns against Fabiano Caruana. 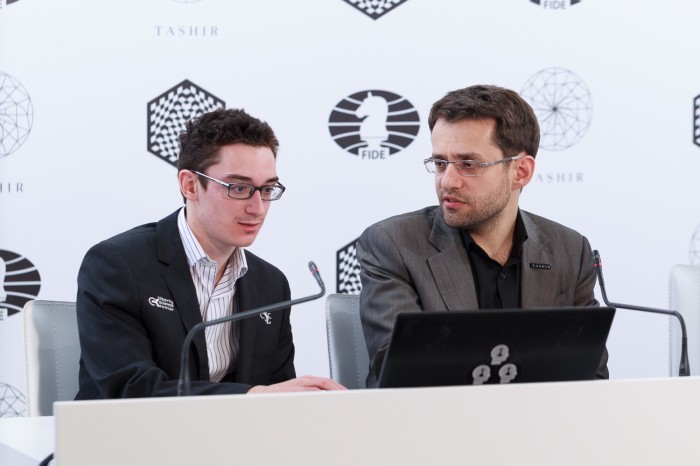 “You see? I mated you, my friend!” Aronian said jovially to Caruana during their post-game analysis. Photo courtesy of World Chess

"If you aren't 2600 FIDE, you should be expecting to make serious mistakes all of the time, and your best chance to get better is to actually experience these mistakes, internalize them, think about and obsess over fixing them in future tournaments."

1. Study endgames leading up to a tournament.

Studying endgames is a given, but I realized that endgame study is useful, not just in general, but as short-term preparation leading up to an event. Why? If you’re like me and get into time pressure, you’re most likely going to reach the endgame with very little time to think. Even with more practical time management, long games can lead to time scramble endings. Having endgame ideas, principles, and theoretical positions fresh on your mind helps a lot when you have 2 minutes left to make all of your decisions. After finishing one of my games, I witnessed this theoretical endgame with Black to move between WIM Annie Wang and Expert Rickie Simms.  What should white do?

Show Solution
The key to playing for a draw in a worse position is to look for all of your opponent’s attempts to win. Then, make each attempt as difficult as possible. Here, Black only has one winning attempt: ...Re1, ...Rb1, letting the king out of its cage and preparing the a-pawn’s promotion. How can white make this idea more difficult to achieve?
Show Solution

2. Opening knowledge is only valuable if you understand the middlegames that arise when theory ends.

In my last round, my opponent played an opening I was fairly familiar with. I blitzed out the first 12 moves which involved a very interesting pawn sac, and then my opponent deviated from the most common move. I'd looked at the variation years ago in what I thought was enough detail: I had looked over a few GM games (including a Carlsen game I could play out by heart). Yet, I was stumped. I spent 30 minutes over the board trying to understand the position, chose an idea that was absolutely incorrect, and had to struggle the entire game to hold a draw. The game showed me that I have to reassess the way I've been studying openings. In his book, Studying Chess Made Easy, GM Andrew Soltis devotes an entire chapter to “the right way to study an opening”. He describes the moment where one’s book knowledge ends as “leaving the station” and gives this advice to prepare for it:

“You want to know what your options are, expressed in terms of goals, maneuvers and plans... You need to grasp what David Bronstein called the ‘positional essence’ of the situations that arise.”

White's assets and plans Black's assets and plans Then, Soltis advises playing over master games from the position to see each side's ideas in practice. For example, Black usually brings his rooks into the game with ...Rb8 and ...f5 while White often reinforces his knight on d5 with Nce3.

Overall, it was a worthwhile tournament experience, which gave me an awareness of some of the gaps in my play and study habits. Continuing the never-ending quest for chess improvement, I'll go back to the drawing board, make adjustments, and try to implement them in future tournaments. My next one will be the Lina Grumette Memorial Day Classic.
SHARE: