Best of US Chess 2016 #6: Pete Karagianis on the Junior High Nationals 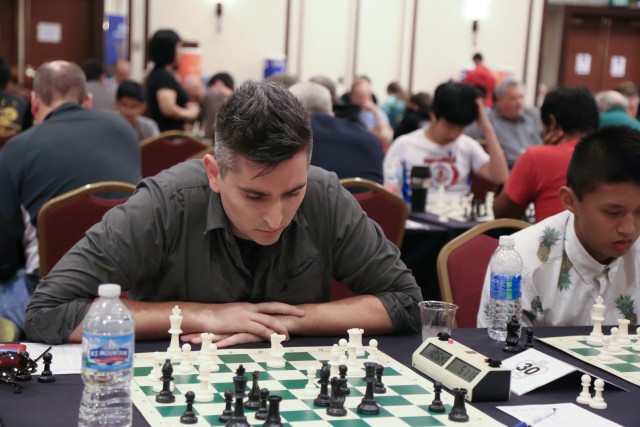 Pete Karagianis at the 2016 U.S. Open
The #6 article in Best of US Chess 2016 is Eight Lessons From the Junior High School Nationals by Pete Karagianis. Judges praised Pete's humorous writing style and useful insights into the world of scholastic chess. Number 1: Tactics Matter! Yeah, like “Pin it to win it.” Remember all of those neat rhymes and sayings and memory tricks to help recall the way to maximize your threats? They, of course, will always find a way into the games at Nationals. Take, for example, the following position from the K-8 U1000 section between Nigel Cooper and Avighnav Vasudevan: As it happened, black missed his chance and fell for a fork later in the game, losing. Tactics count! Number 2: Hoodies are in Style 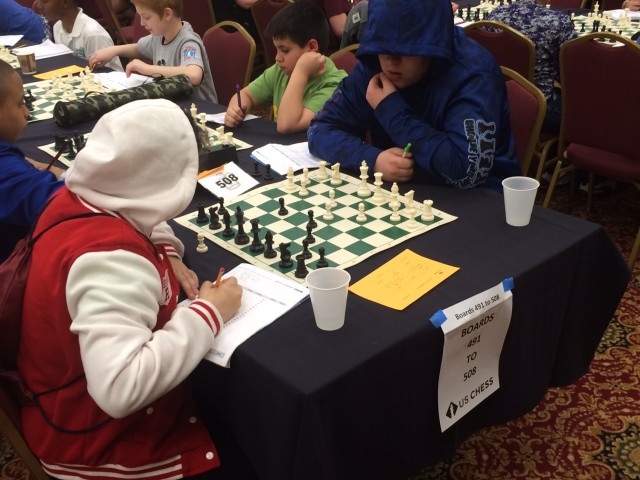 If you scoped the USChess Twitter feed (@USChess), you may have noticed the power of the hoodie sported by Ben Li in the K-9 Championship section. It guided him to an undefeated 4.5/5 score and sheltered him from the elements, glaring light, and, well, pretty much everything else. The hoodie was, in fact, a very popular bit of attire across all sections. Perhaps I can learn something from this fashion “do.” Pete Karagianis is a frequent contributor to US Chess News and Chess Life Magazine. He won the Chess Journalists of America award for "Best Story of the Year" for his Chess Life cover story, "The Struggle" in the March 2016 issue.

"Pete’s piece brings back lots of nostalgia from my days as a scholastic chess player. The hoodie has certainly never gone out of fashion. I admire the effort Pete made in finding entertaining and instructive examples. The wide range of funny and practical lessons will be memorable for all readers!"

"It has a good amount of humor, but still captures the heart of scholastic chess. It shows the reality of many chess players’ experiences growing up with chess. The games were well annotated and the article was well written as a whole."

"Karagianis article is a ‘must-read’ for ambitious scholastic players and their parents. American scholastic tournaments have been the arena where many of our young talents have honed and refined their skills. The article is fast moving, informative and yes, hoodies are indeed fashionable at the Nationals!"