Back to the US Chess School: Akira Nakada on USCS 51 in San Francisco

In early August 2019, a group of the strongest juniors in the country were invited to the 51st US Chess School at the Mechanics Chess Club in San Francisco. I was eagerly anticipating this camp because it was being taught by former US Champion and FIDE Top 30 player GM Sam Shankland. To be able to see the thought process and teaching style of such a strong player was exciting—if not slightly daunting—but we were ready for a tough and rewarding week. The camp did not disappoint.  Indeed the seriousness of the camp was made quite clear to us as, on the first day, after flying overnight back from two weeks of tournaments, GM Shankland proceeded to bestow on us lucky campers a set of warm up worksheets. “One hour,” he said. We were supposed to take a whole hour for a warm up? I’ll be honest, this “warm-up” worksheet sounded like a death sentence to my still sleeping brain. However, I gathered myself and started working on the worksheets. From then on, we were greeted at the beginning of camp each day by these friendly warm up worksheets. 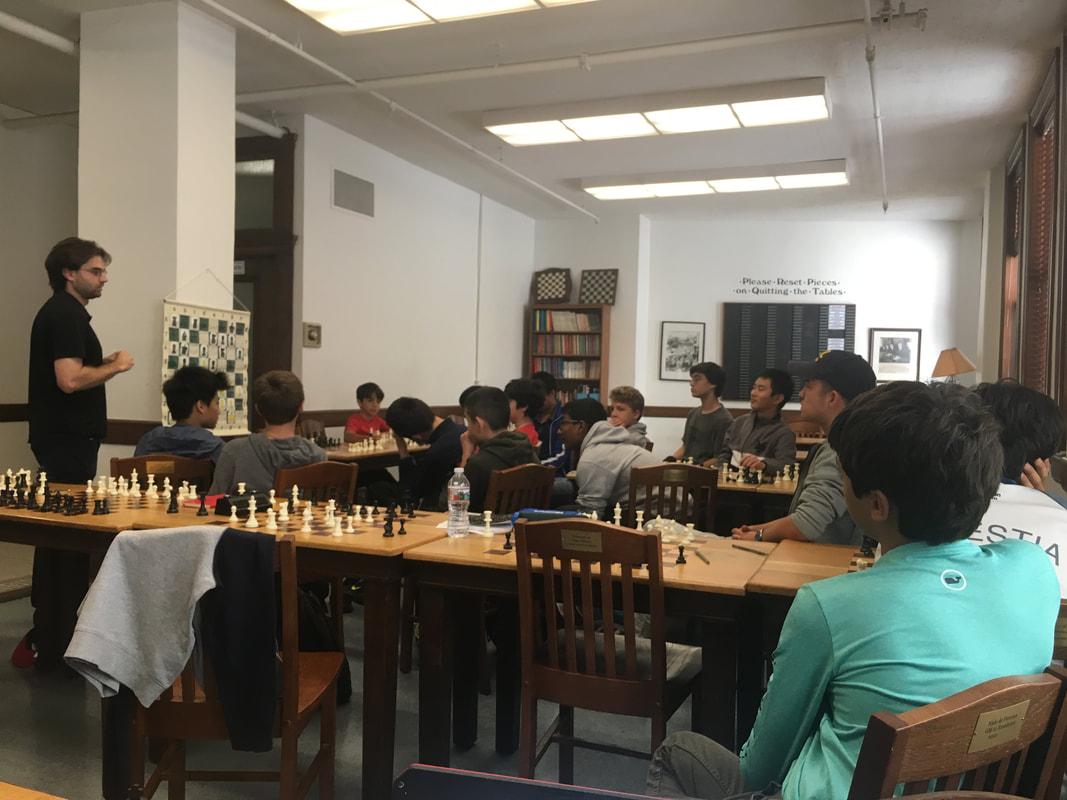 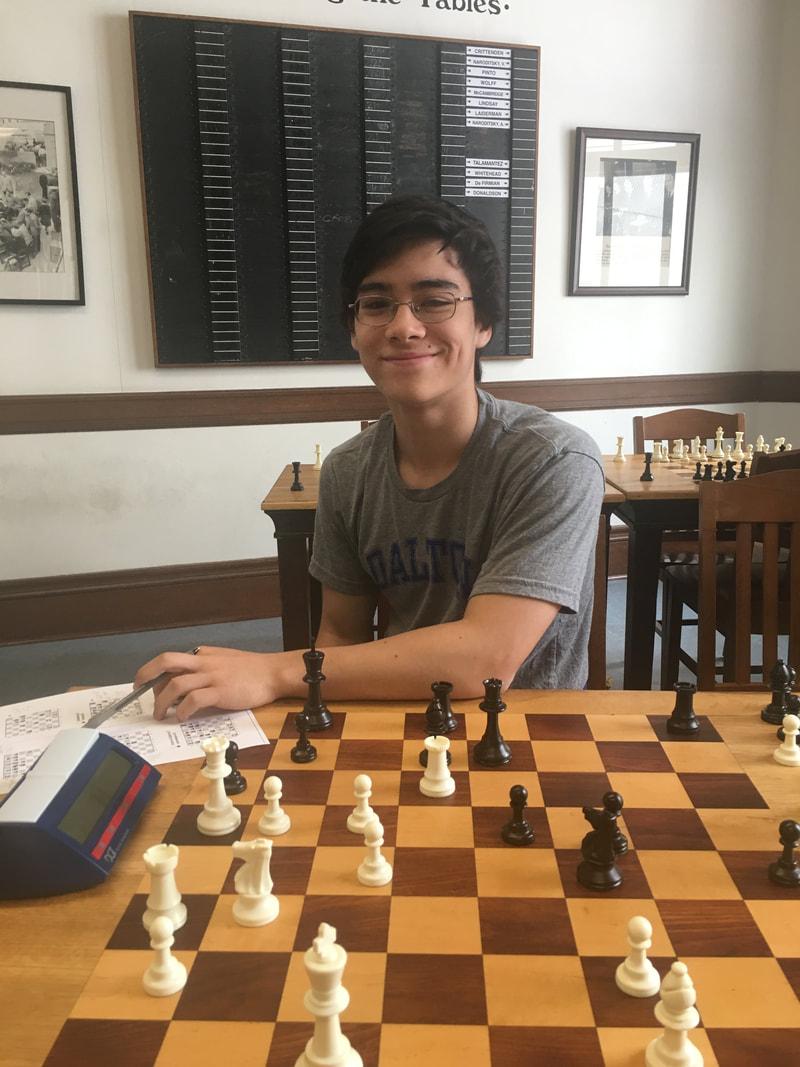 Akira Nakada
GM Shankland ended up being a super nice and approachable coach. He asked us to call him Sam, so I’ll refer to him as that for the rest of the article.  When we got to the main lessons, the focus shifted to calculation. Most people, upon hearing “calculation” immediately begin to think about tactics and crazy complex positions. While tactics are a part of calculation, and are particularly useful in complex positions, calculation is broader than just tactics.  Calculation is about looking into the future, considering the possible moves and countermoves that could result from a set of candidate moves. In any position and for any player, calculation is a critical skill that could make the difference between a win and a loss. For the majority of us who are not Grandmasters and make a few blunders, the ability to see farther into the future than your opponent is a critical skill and frequently decides games.  Here’s an example of one of the positions we analyzed.

White to move and play.

Can you solve this position? It’s quite a long variation, so don’t feel bad if you can’t calculate all the way to the end. Show Solution Calculation is an extremely hard skill to master in chess.  This is because it depends more on hard work and dedication than raw talent. In positions like the one above, what is required to solve the position is not attacking prowess or keen intuition. It is patience and diligence and willingness to sit there until you have the right answer (although sitting for nearly an hour on a single position is not recommended).  Part of this diligence is the willingness to calculate a variety of different variations, even if they seem ridiculous. In his lessons on calculation, Sam posed several positions on the board in which one side had a decisive strategic idea that was being prevented. In these cases, Sam stressed the importance of asking yourself, “Can I do it anyway?” Calculating these seemingly “prevented” ideas is a useful tool, that is overlooked by many players. Here is an example from one of my games.  (White to play) Here Black just played ....Ne4. I would love to take the strong knight on e4 and weaken black’s pawn structure, but after Bxe4, dxe4, the knight doesn’t seem to have a good square to take advantage of the weakness. Or does it? Upon pushing myself to calculate these “prevented” ideas, I found Bxe4, dxe4, Ng5!. Here is the full game.  After the main lesson, we had a break, so we got to explore the Mechanics Institute building.  I noticed as I walked through the hallways that this was a beautiful historical building. I did some reading on their website, and it turns out that it was built in 1909, just three years after the Great 1906 San Francisco Earthquake. The Mechanics Institute is not just a chess club—it’s mainly a library. In the library, there is a cool iron and marble spiral (helical for you geometry nerds) staircase.  Despite the fact that the building is over 100 years old, the chess facilities are nice and modern. In fact, there were about a dozen DGT boards, and plenty of monitors where you could watch games live.  But I digress . . .  Sam, not wanting to annihilate us with endless calculation positions, took pity on us and used the second half of the day to teach us endgames—another less intensive, yet equally important, part of the game. Typically endgame study is difficult, because it is hard to know what and how to study to get better at endgames. Sam presented us with a new way of understanding endgames—an approach I’ll call plan-based thinking. Frequently in endgames, positions arise in which one player is better, but the path to victory, if there is one, is long and difficult to achieve. Usually in these positions, many players (and sadly I am no exception to this) with no forcing continuation and minimal pieces, either sit and play moves that do nothing, or worse, self-destruct. When applying plan-based thinking, the offensive side first imagines the final (winning) position, and then works backward to reverse-engineer the steps to get there. The defensive side must anticipate the opponent’s steps, and try to find the easiest step to block. Take this position, where white is clearly better, but the path to victory is unclear. White to play, evaluate Ra5 (Try to use the method I discussed!). [Spoiler alert: if you want to solve the problem on your own, stop reading here] This is the type of position in which plan-based thinking is required. When the rooks are traded we arrive in a bishop ending where white has an extra passed d pawn, but black has a strong blockade on the d pawn.  Here is the full game, in which Grischuk implemented this plan to beat Nakamura.  In the next position, White is again better, but with accurate play, black has chances to hold. Black to play and resist.

As Black in this position, it is important to anticipate White’s winning plan and then prevent it at the right moment.

As Black, once we realize White’s plan, the best move becomes clear: ...f6 to prevent the advance of the e and f pawns.

Towards the end of camp, we continued the US Chess School tradition of the no-holds-barred blitz tournament. Contrary to the usual knockout type event, in this tournament, the campers were split into two groups, where each group played a round robin to decide the winner. The two winners of the groups would then play in the final. After I suffered a loss in the first round, some big blunders from my opponents led me to win the rest of my games. I eventually won my group, while Josiah Stearman was the victor in the other group. In the final, I played Josiah as White, and lost a tough and complicated game. Congrats to Josiah!  Finally, we arrived at the end of the camp. For the last lesson of the camp, Sam gave us an inspirational speech, explaining the reality of what it takes to progress to the highest echelons in chess. Sam made it clear to us that, in order to reach that kind of level, we needed to think of chess as a lifestyle. Ultimately, success in this field comes down to who wants it the most: who is willing, not just to put in the hours, but to go beyond that. This statement is undoubtedly true, and that dedication is what has catapulted Sam Shankland past his peers. Sam’s talk was particularly interesting for me because he talked about his struggles balancing school and chess study. As a junior in high school, this is an issue that I (and most other strong high school chess players I know) face daily. Essentially what Sam told us is that, besides using your time efficiently, eventually you must come to a decision about what you want to pursue in your life. For Sam, the decision came when he was chosen to represent the U.S team for the Olympiad, during his finals week at college. For him, the decision was a no-brainer. He explained that each one of us will need to make this decision. Hedging our bets and not committing to either chess or education is only delaying the inevitable.  Ultimately, being able to study with Sam for a week was a lesson in more than calculation and endgames; it was a once-in-a-lifetime chance for me to be around someone who has devoted his life to chess. Since camp, I use any extra moments in my day to constantly work through puzzles and try to keep my brain in the game at all times. I know that week of camp will stay with me forever. Greatness is contagious—so thank you Sam for the bit of genius that I know rubbed off on all of us.   I'm also grateful to the US Chess School sponsors and coaches, including Dr. Jim Roberts and the Mechanics Institute.  ***Thank you to Eric Yuhan Li for his copious note taking skills and being so generous as to lend me his notes for this article.
SHARE: