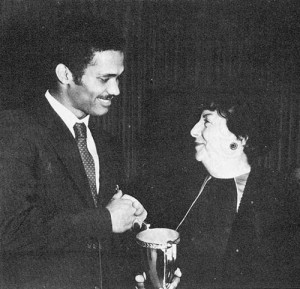 Tate accepting his 2nd Armed Forces Championship title
Brilliant tactician, International Master and 5-time Armed Forces Champion Emory Tate died on October 17, 2015. He was playing at a chess tournament in San Jose, California, the GM Sam Shankland Championship. Emory is remembered by peers and fans for his outlandish attacks and dramatic post-mordem analysis. As recently as National Chess Day on October 10, 2015, Emory contributed his own analysis to US Chess, on a blindfold exhibition at the Weibel Elementary School in Fremont, California. An excerpt from that piece, after Emory played 16.Qe4, showed off his colorful approach to the game and to its annotations.
A move played to create confusion!!! Most blindfold players would have a hard time seeing it.  My opponent even stuttered (Qe4?)  Yes.  And the battle continued.   Emory was featured on the earliest days of Chess Life Online for his trips in 2006 and 2007 to the Curacao Chess International, where he revealed his "frozen pawn" idea and executed his usual Grandmaster scalps.
Also see Emory's famous win over GM Yudasin. 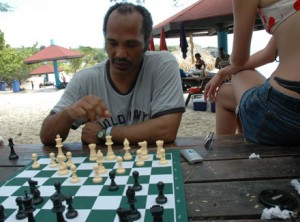 FM Todd Andrews said, "He took me down in the first tournament I ever beat a master, but praised my teenage brain in doing so. While he was no stranger to controversy, he also knew how to encourage. We traveled the Northeast together. We both found ways to hustle up gas money to get to the next event. We got lost and somehow found our way back again. He was always proud of his children. He showed me that a southern boy could go toe-to-toe with the Grandmasters.... Everyone in American chess knew right and well how strong and charismatic he was the entire time he was here. RIP, my ole friend - you are already sorely missed and US tournaments will not see another like you ever come along." Daniel Parmet wrote of a saying that went around the US chess subculture, "you are not a real chess player if you do not have an Emory Tate story." On chess.com, GM Maurice Ashley said, "Players like him do not come along every day, every month, every year. He was one in a generation, and he will be thought of, always, with a chuckle and a smile. No doubt he is challenging Tal to some blitz right now. " Share your own favorite Emory stories or games in the comments thread, and see FM Mike Klein's chess.com report for more memories and games.
SHARE: