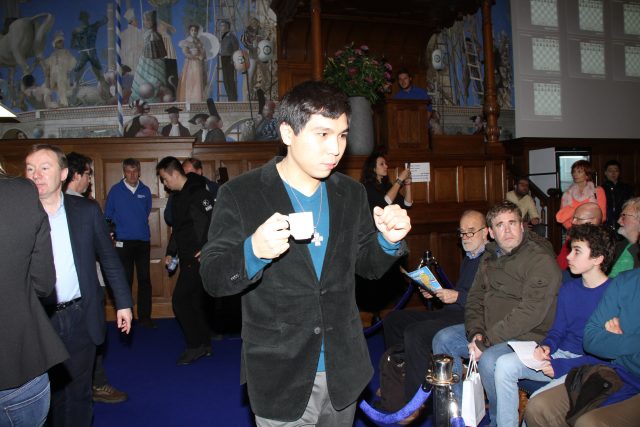 For five years the traditional Wijk aan Zee super-tournament – this year celebrating its 80th edition – has gone on tour; devoting two rounds of 13 each year to moving the top tournament to various Dutch cities. The cities (or landmarks such as the Rijksmuseum) bid for the right to host the best players in the world, supplementing the funding received from the perennial tournament sponsor, the local steelworks variously branded over the decades as Hoogovens, Corus and nowadays Tata. For the tenth round of the 2018 edition of the Tata tournament on Wednesday, the most ambitious relocation yet was made, transferring 14 of the world’s elite players, alongside organizers, commentators and press, to the northern city of Groningen, more than 200 kilometres from Wijk aan Zee. The players left Wijk aan Zee soon after the ninth round and some arrived as late as 10.30pm. The only player who preferred to travel on the morning of the round was World Champion Magnus Carlsen, who took his own Tata Chess car with his father and arrived late morning for the 2pm start. 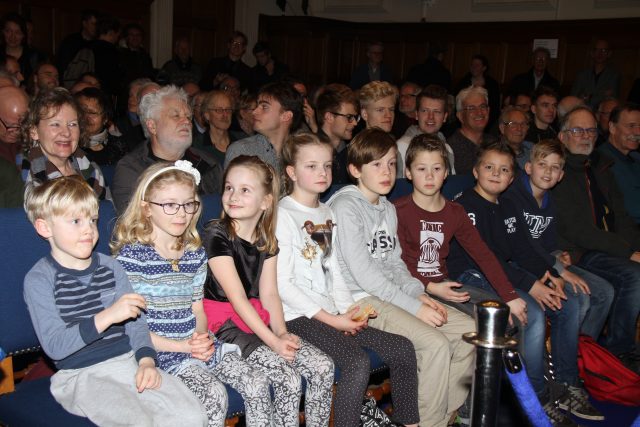 Groningen is a town with a long chess history, hosting the first international tournament held after World War I, a World Junior Championship in 1976, a PCA Interzonal, as well as all but the final of the 1996/7 FIDE Knock-out World Championship tournament. Add to that the Schaakfestival Groningen, which has run over the Christmas period continuously for 45 years. One memory from Groningen is watching a 15-year-old long-haired Vladimir Kramnik perform modestly in the Open tournament and deciding that he would never be a top player because he lost too much time during the game chain smoking. A year last he returned to Groningen, won the Open and never looked back. Apart from chess, Groningen is known for being next door to one of the world’s largest gas fields and having an ancient university, operating continuously since 1614. The gas riches were a financial boon for the Dutch government but from the 1980s the province of Groningen started noticing a surprising and increasing number of earthquakes, caused by gas drilling. Despite recent production cuts, the earthquakes have continued with 100,000 people reporting earthquake damage and a repair bill totally more than $1 billion. Little more than a week from the arrival of the Tata tournament, a quake measuring Richter 3.4 was reported, the worst for five years. Fortunately the city of Groningen continues to escape most serious worries and the grand and ancient University of Groningen was in perfect order when the players arrived for the tenth round. The local Mayor and other dignitaries were on hand to greet the Grandmasters on the steps of the university entrance, with plenty of chess fans and media on hand. When the action started at 2pm local time, it was hard to know which game to watch with immediate complications arising on most boards. However quite soon both 8-time Russian Champion Peter Svidler and English debutante Gawain Jones found the ground giving way beneath them. 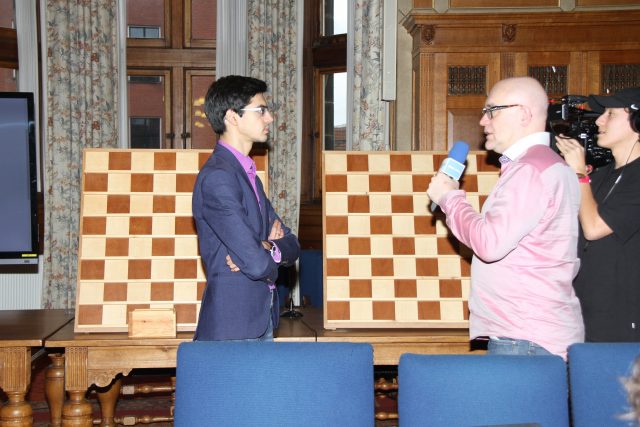 Mamedyarov’s win took him back to the top of the standings, equal with Anish Giri, who had managed to create nothing against the tournament’s drawing master Sergey Karjakin. 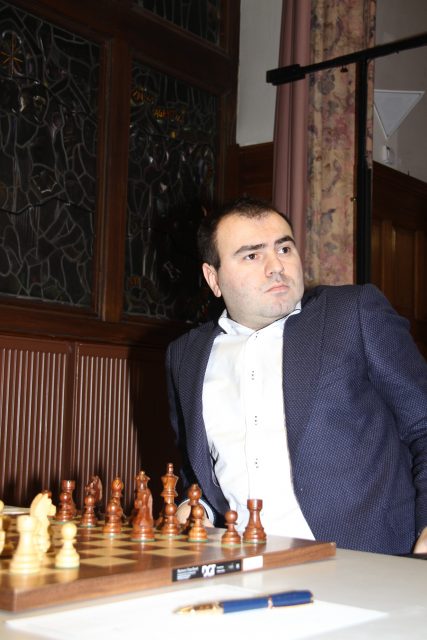 Of the two US players competing in the top tournament in Wijk aan Zee, Fabiano Caruana and Wesley So, the defending Wijk aan Zee Champion, was having by far the better tournament, just a point from the lead, while Caruana was sitting in eleventh place having scored just 1/5 between rounds 3 and 7. 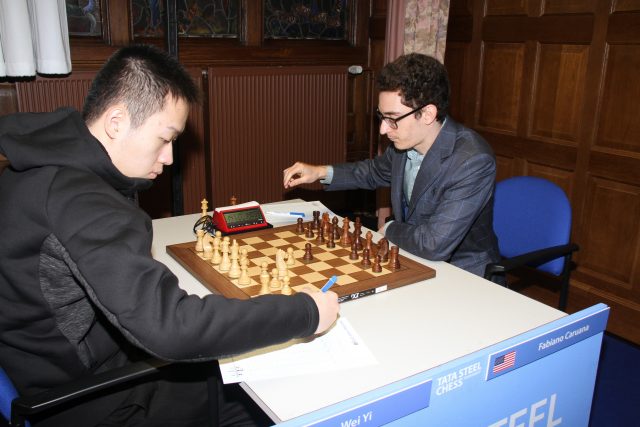 While Caruana was forced to settle for a sharp but inevitable draw against an apparently unambitious Wei Yi, So was presented with the hardest job in modern chess; playing black against the World Champion. 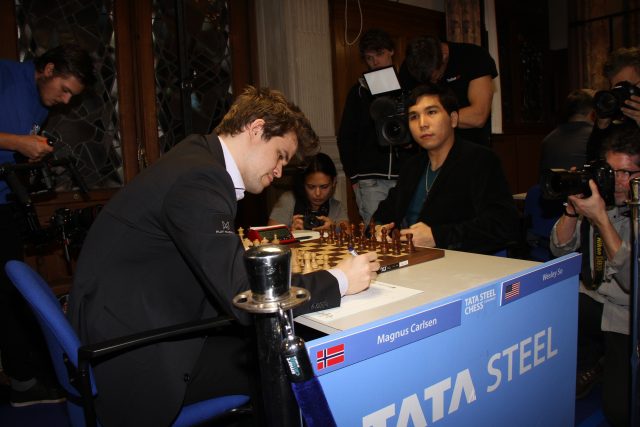 The game turned into an epic, which can best be covered by a series of diagrams.

As a result of his success in the war of attrition, Carlsen moved to the tournament lead for the first time, tied with Giri and Mamedyarov. Mamedyarov will have White against Carlsen in the next round, a clash which may well decide the tournament (and decide whether Carlsen moves ahead of the Anand who like Carlsen has won the Wijk aan Zee tournament five times). As usual, Tata on Tour turns the arrival of the top players into an excuse for a one day chess festival but, as in Utrecht two years earlier, the numbers almost swamped the organizers. The playing hall held fewer than 200 spectators, leaving about 500 of the overflow to fit into the commentary room watching the Chess24 broadcast live. The locals, many seeing a high level tournament for the first time, had other options – a simultaneous exhibition, chess virtual reality equipment, a computer area for online games, a room for friendly games, a chess and education display among them. However it seemed that most had come to see Carlsen so the queue to enter the playing hall never disappeared. Carlsen versus So was also the second-last game to finish, allowing six and a half hours for fans to catch a glimpse of him playing. The few who decided not to return home after Carlsen won could also enjoy the treat of the World Champion analysing his game in the commentary room. The University later reported that 3,000 people had come to the UoG to watch the games – no doubt a rough estimate but entirely possible. Bringing high level chess to all corners of the country is a Dutch tradition, taken to extremes in the 1935 Alekhine v Euwe world title match when the players took a train to a new city almost every second morning. However the modern, less taxing version, seems to be a wonderful way of bringing the top players to fans in out-of-the way places and is a great promotion for the game. Of course the distances in the US are magnitudes greater than in the Netherlands but could the Sinquefield Cup in the future have the players competing for a day in Columbia or Springfield, or even further afield? Even as a one-off, it could be an idea worth considering. The 11th round of the Tata tournament resumes in Wijk aan Zee on Friday. Games start at 7.30am AEST and may be viewed via tatasteelchess.com or Chess24.com. GMs Rogers is a frequent contributor to US Chess and Chess Life Magazine and was one of the "Best of US Chess" top writers for his reportage on the 2017 World Cup.
SHARE: