The 44th FIDE Chess Olympiad kicked off with a spectacular opening ceremony featuring musical and dance performances from the host country India. In a country already crazy for chess, a win on home turf would mean absolute delirium.

The U.S. men come into the event as heavy favorites, out-rating the next team by 75 points. But the Olympiad is no ordinary tournament. Team cohesion and form can count for as much as raw playing strength. The Americans are missing Hikaru Nakamura, who recently barely missed coming second in the Candidates tournament, but in his place they have the Armenian transplant Levon Aronian, long one of the world’s elite. 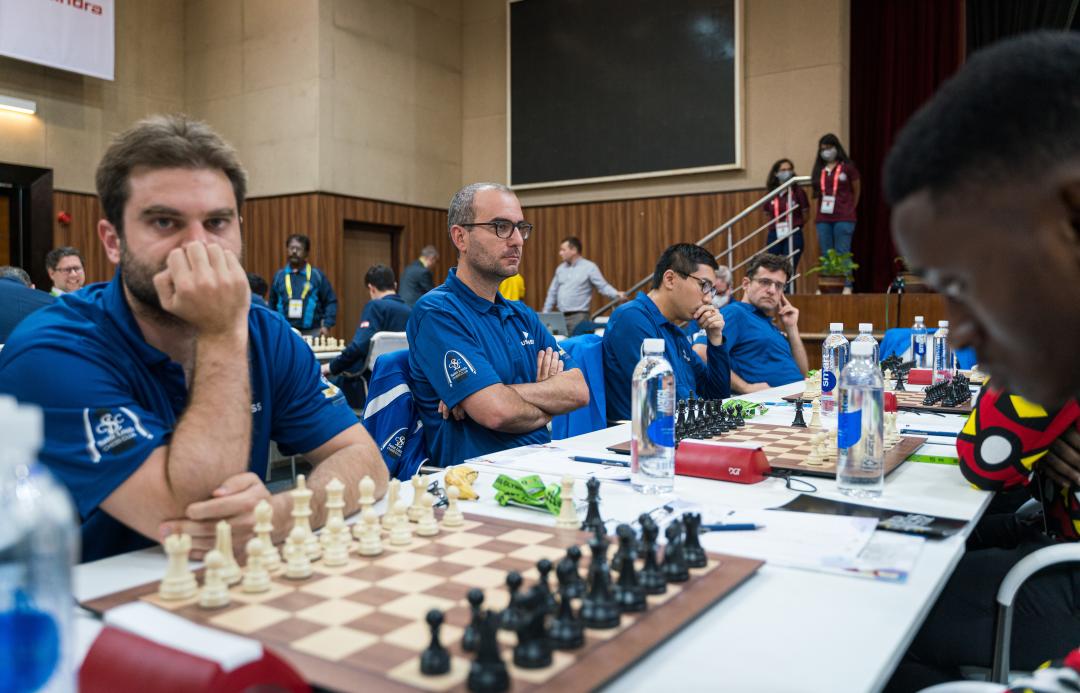 Image Caption
The U.S. team patiently awaits the start of their first round match against Angola at the 44th FIDE Chess Olympiad. Photo: Ootes

The Indian A team is the second seed. In recent years, India has seen a massive groundswell of young talent. There’s no better evidence of this than the fact that they are fielding six teams (three each in the open and women’s sections) and their C teams are in no way outclassed. The A team is the veterans, with graybeards like Vidit (27). The B team features teenage whiz kids Gukesh, Sarin, and Praggnanandhaa. It’s hard to say which team is more dangerous. One veteran who won’t be competing is Indian legend Viswanathan Anand, who will be cheering from the sidelines in his native Chennai.

A surprising third seed is the Norwegians. Of course, the world champion Magnus Carlsen hails from Norway, but in the past they’ve lacked the depth to compete for top team honors. But with Russia and China out and a rising crop of young talent, they could make a run.

Typically, the first few rounds in the Olympiad are the calm before the storm. With big rating disparities in the pairings, upsets are rare -- especially because of the team format. Snatching a point on a single board is one thing, maintaining it over four boards is another. Nonetheless, there are always interesting moments on the individual boards.

The U.S. faced Angola in round one. Aronian encountered tough sledding on board one, despite out-rating his opponent by more than 400 points. 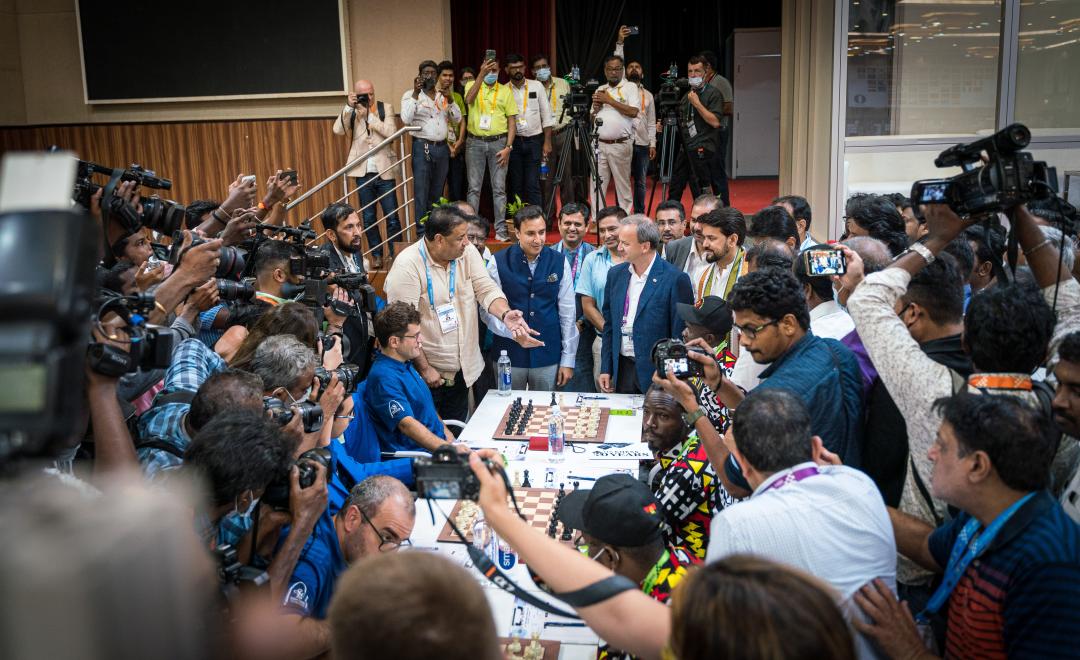 Image Caption
The excitement builds for the start for the 44th FIDE Chess Olympiad. Photo: Ootes

The other three U.S. boards won convincingly so the match result was never in doubt, but it was a wobbly performance from Aronian. He’ll have to find his form quickly if the U.S. wants to win gold. 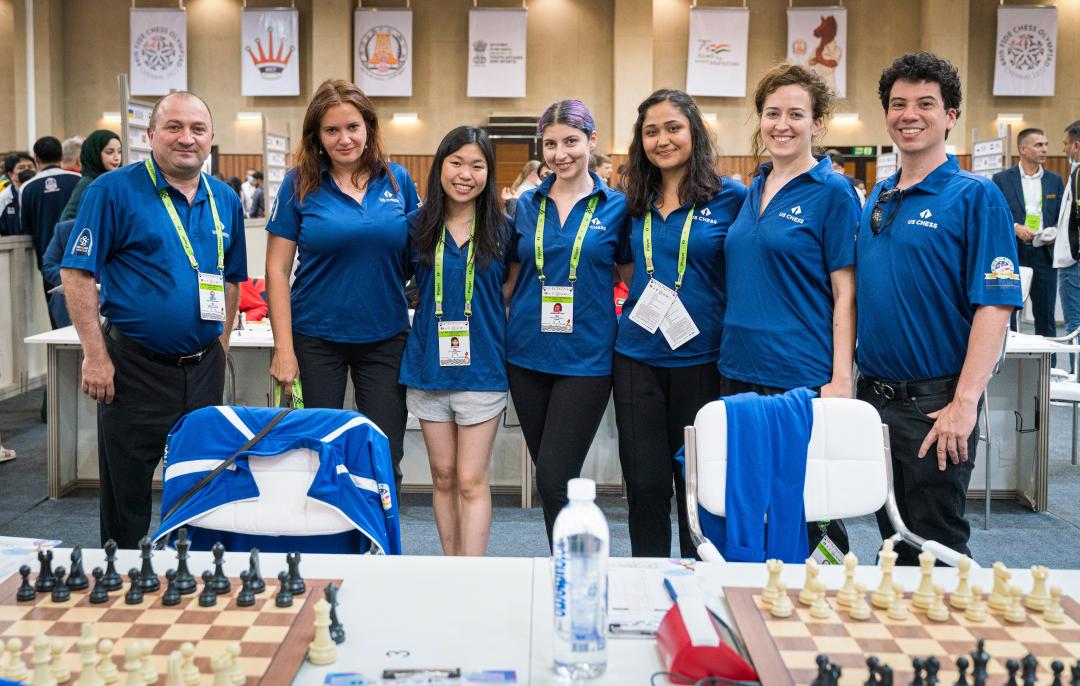 Image Caption
The U.S. women's team with their captain and coach take a moment for a photo at Round 1 of the 44th FIDE Chess Olympiad. Photo: Ootes

The women face a tough challenge to reach the top spots with powerhouses India and Ukraine at the top of the rating lists, but on a good day their talent and experience will pose problems for any team in the field.

In the first round they faced Puerto Rico. On board four Abrahamyan channeled another American legend, Paul Morphy, by parlaying lightning quick development into tactical fireworks. 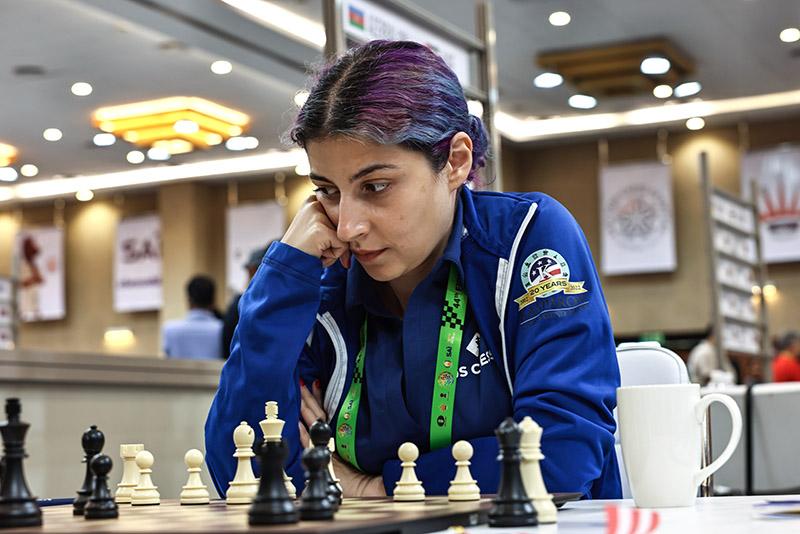 Image Caption
WGM Tatev Abrahamyan taking stock of her position during Round 1 of the 44th FIDE Chess Olympiad. Photo: Livshitz

None of the top teams slipped up in round one, but it only gets tougher from here.

Men's team made up of…

Men's team made up of transplanted prodigies.
I root for Wesley to contribute hugely... Still believe this would be an uphill struggle, but... Go for it.