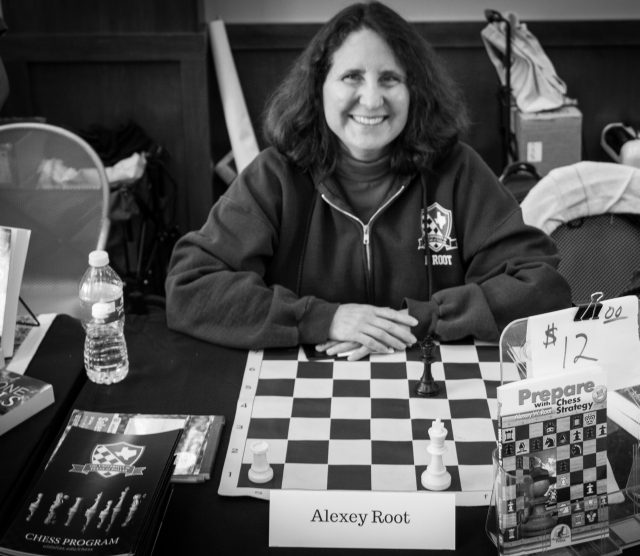 WIM Dr. Alexey Root
WIM Alexey Root is one of ten women pre-registered for the Texas Women’s Chess Championship (June 23-34). The event, open to women 16 and older, features a free banquet meal and entry fee. Find out more on the official registration link   Dr. Root, a former US Women’s Champion, author and frequent contributor to Chess Life Magazine and US Chess News, talks about the two major steps that she took to get her in shape for a comeback. My last tournament was in 2015. Before that, I had not played since 2009. My focus has been on others’ chess games. I analyze games for my online students, write chess articles, and teach chess at summer camps. But for June 23-24, my focus will be on my chess games. So I have taken the following two steps to reactivate my chess-playing brain. 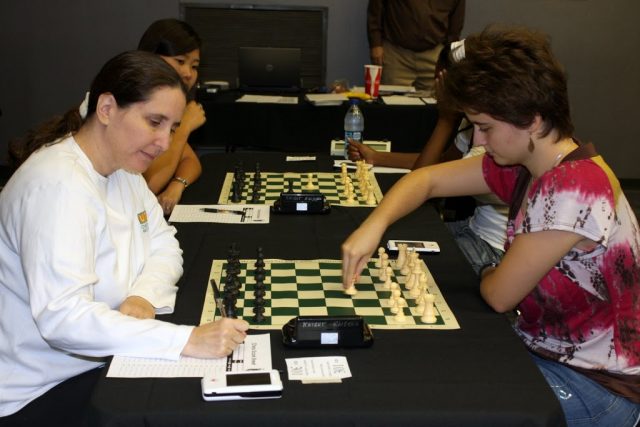 WIM Alexey Root in the 2008 Texas Women's Championship
Part I: King, Knight, and Bishop   First, I learned the king, bishop, and knight checkmate, a checkmate highlighted in the acceptance speech of the 2017 Chess Educator of the Year, Grandmaster Andy Soltis. As I reported in the June 2017 issue of Chess Life magazine, “Soltis’ first chess example was the king, bishop, and knight checkmate. . . .When students master that checkmate, they know that they learned something that day.” I paid attention during Soltis’s lecture, but apparently listening alone is not enough for me to succeed. I still couldn’t complete the checkmate in online practice. If you want to try, here is a link. In the 2018 US Chess Championship, Grandmaster Ray Robson defeated Grandmaster Varuzhan Akobian with the king, bishop, and knight checkmate. After watching that game, I then watched YouTube videos of how to complete the mate, then practiced the mate online many times. I even wrote about how to complete this checkmate, in this SparkChess article. Knowing how to win this endgame now encourages me, as more than 35 years ago I drew a tournament game with king, bishop, and knight versus a lone king. Part II: Tactics, Tactics, Tactics My second step to prepare for the Texas Women’s is to study tactics. A Facebook comment claimed that the current US Women’s Champion, Nazi Paikidze, solves “at least 100” Chess.com Tactics Trainer problems each day. (The comment was not made by Paikidze.) After reading that comment, I decided that solving five Chess.com tactics in a row would be my daily goal. Sometimes I get four tactics right in a row and then miss one. So then I start all over with my five-in-a-row goal. Before I make my first move on a Tactics Trainer problem, I repeat to myself “Don’t move until you see it.” I am channeling the climactic scene in the film ">Searching for Bobby Fischer. My chosen move may be a check (with one forced response) or it may win material, for example by pinning a piece. And I’ve usually seen one move beyond my first move. Take a look at this problem, where White has just played 1. Ke3 and you (Black) are to move: [fen]4k3/p3bpp1/2p3r1/B1p1p2p/2P1PPb1/3PK3/P1QN1R1q/1R6 b - - 0 1[/fen] Before I made my first move, I saw that 1…exf4+ was a forcing check. That is, being in check, my opponent did not have time to do anything to me. White’s only response, as I predicted, was 2. Rxf4. Then, having planned ahead due to my “Don’t move until you see it” motto, I quickly played 2…Bg5, to pin the rook. When I first calculated, before playing 1…exf4+, 2…Bg5 seemed like a good-enough move. “Pin it and win it” is a common chess strategy. However, by settling for a pin, I missed the much better move of 2….Qe2# and got the problem wrong. After 2…Bg5 there is 3. Rb8+ and White plays on for a few more moves. The mistake of playing a “good-enough move” instead of finding the best one, such as pinning rather than checkmating, is called the Einstellung effect. As the linked article states, the Einstellung effect is “the brain’s tendency to stick with solutions it already knows rather than look for potentially superior ones. Experiments have shown that this cognitive bias literally changes how even expert chess players see the board in front of them.” To counter this effect, I cannot be like the movie character Josh Waitzkin, instantly whipping out 12 moves of pre-calculated brilliance. After each of my opponent’s moves, I must pause and recalculate, to make sure I didn’t overlook better moves. How I’m training now, with Chess.com, is much different than how I prepared for my previous women’s tournaments in Texas. In 1998, I organized the Region 10 Women’s Chess Championship, during which I also offered a free children’s non-rated chess tournament and gave a simultaneous chess exhibition (a “simul”). The local newspaper (Denton Record-Chronicle) ran a front-page story before the tournament and a full page of photos post-tournament. The Texas Woman’s University newspaper and community newspapers ran stories too. By seeking press coverage, and by renting the 9,000-square-foot Denton Civic Center for the day of chess, I hoped to bring attention to chess generally and to women in chess in particular. In 1998, when I was not playing my tournament games or giving my simul, I entertained my five-year-old daughter Clarissa and her friend Katie. I still won all my tournament games (even without chess preparation) because, in 1998, I was the top-rated woman in Texas. The next highest-rated player in my women’s tournament was rated 1276, 800 points below my rating at the time. 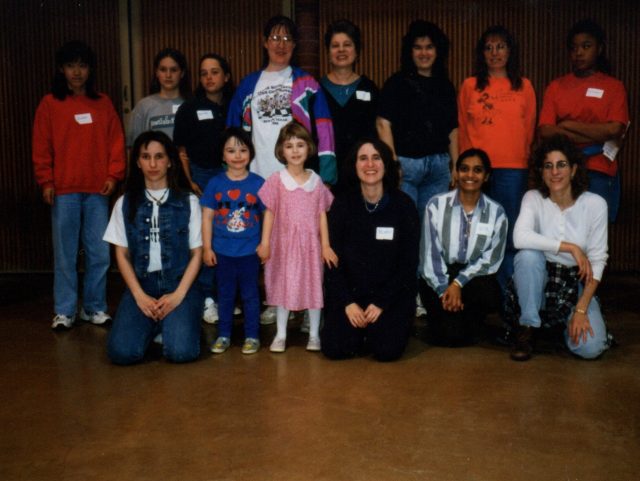 1998 Texas Women's Chess Championship
At my next women’s tournament in Texas, however, I was out-rated. Therefore, I should have prepared. But I did not, as my focus was on my travel companions. In 2008, I drove three UT Dallas chess team women six hours to Lubbock, so we could compete in the Texas Women’s Championship at Texas Tech. I was the only authorized driver, per UT Dallas rules. I also was in charge of all other travel logistics. When I played against Woman Grandmaster Sabina Foisor in round 1, I realized that I didn’t even know how to use a MonRoi. That was especially embarrassing, as I write a blog at the MonRoi Web site. Before 2008, when I did prepare for tournaments, I did so from books. For example, I highlighted pages featuring my favorite openings in the second edition of Batsford Chess Openings. I might review my trusted Batsford opening lines again a couple days before the Texas Women’s. In 2008, I first logged into Chess.com. And, in 2009, I tried Chess.com’s Tactics Trainer. Unfortunately, when I went over 2400 in Chess.com’s tactics rating system, I rested on what is, for me, a very high rating. Returning to Tactics Trainer in mid-May of 2018, I hit a Chess.com rating low of 1886. Now I seem to be creeping back toward expert level with my “five-in-a-row” routine. In the next article, I will share if I played like a US Chess rated expert at the Texas Women’s Chess Championship. Find a list of upcoming Women’s Events https://new.uschess.org/community/womenevents/ on the US Chess’s women’s initiative page, including the US Women’s Open on June 20-21, part of the Las Vegas International Chess Festival.  Alexey Root is a Woman International Master who was the 1989 U.S. Women's chess champion. You can find her books on US Chess Sales and  on Amazon.com. Her chess.com handle is childrenandchess.
SHARE: