Intro by Eric Rosen After getting a strong dose of chess and beach at the FISCA Open, Kostya and I trekked our way west for the Benasque Open. With just four full days of non-tournament play between the events, we did our best to find a balance between traveling, recharging, and exploring new scenery. En route to Benasque, we stopped for two days in Barcelona. Upon arriving, we met up with Kostya's girlfriend Maya, who became a key accomplice in finding awesome restaurants and planning excursions. Additionally, we had a brief encounter GM Mesgen Amanov who was taking a European vacation with his fiancè (I forgot it's possible to take a trip that doesn't involve chess!). Mesgen treated us to the VIP lounge at the Hilton Barcelona with all-you-can eat hor d'oeuvres and all-you-can-drink beverages. Given that Mesgen lives 15 minutes away from my home in the Chicago area, this goes to show that the chess world is a small world! 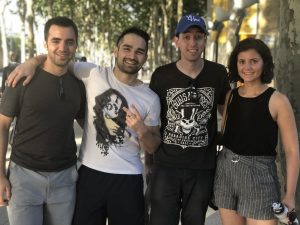 (L to R) Eric, GM Mesgen Amanov, Kostya, Maya
On July 4th, we made the 5-hour bus trip from Barcelona to Benasque. While we didn't get to experience any independence day fireworks or celebrations (the 4th of July isn't really a thing in Spain), there was still a pretty epic light show in the sky. 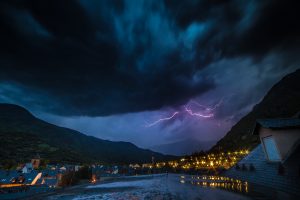 4th of July... lightning!?
For those who aren't familiar with Benasque, it's simply an amazing spot of a chess event. The small village is located in the heart of the Pyrenees with a population of just over 2000. To give readers an idea of how small the town actually is, walking end-to-end was about a 15 minute walk. The entire town could also be seen by taking a short walk up one of the main trails. 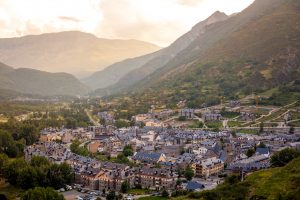 The village of Benasque
Despite the small size, Benasque had everything we could ask for... nice hotels, a variety of cuisines, a few convenient stores, breathtaking scenery, and great weather (for the most part). Although not too many locals spoke English, I was able to use the minimal Spanish I remembered from high school. Using the Google Translate app also came in handy on many occasions. The tournament attracted over 450 players, including 20 GMs. As this was my second straight year competing in the Benasque Open, I completely understand why it's a popular event for chess professionals and amateurs alike. With a one-game-a-day format of the course of ten days, there was plenty of time to enjoy our surroundings while still taking the chess seriously. Over the course of the event, we both had a number of memorable moments on and off the board. Here are some of the highlights ... Round 1 Miracle In the first round, I played Ricard Nadal Fajardo from Spain, rated 1894. With a rating differential of over 450 points and a material advantage by move 13, I assumed it would be an easy win. Making that assumption was a huge mistake. My opponent fought valiantly and I missed some chances to maximize my advantage. Towards the end of the game, I was on the cusp of accepting a draw. I had just a rook for a bishop and two pawns. I felt somewhat devastated, but decided to keep pushing as my opponent looked nervous. Although the position should have been trivially drawn, he missed a crucial trick.

Show Solution From a psychological standpoint, I think this type of start to tournament is more beneficial than it is hurtful. Having escaped from the jaws of drawing,  it was clear wake up call. I went into the later rounds with more momentum. Having Fun with Knights and Horses In round three, I got to unleash one of the most thrilling combinations of my event. By move 16, my opponent was up two pawns, but was severely underdeveloped. Such situations call for further sacrifice...   Similar to knights, horses are also fun if you have decent control. 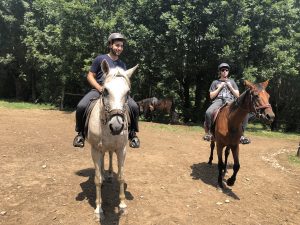 Unlike knights however, the horses weren't too keen on jumping over anything | Photo by Maya Nelson
Kayaking In addition to the horseback riding, we explored the mountain scenery via kayak. The neighboring town of Eriste was just a 45-minute walk from Benasque and offered kayak rentals for 10 euro/hour-- a great bargain and an even greater upper-body workout! 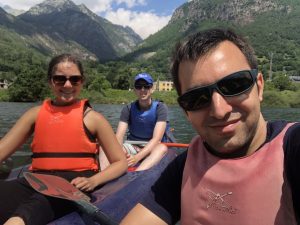 104-move disaster Unfortunately, my experience in Benasque was not completely absent of pain and tragedy. In round 7, I seized an early advantage against a lower rated opponent. In the process of trying to grind down a two-rooks-versus-queen endgame, I made a fatal error...

Show Solution Putting in over 5 hours of effort to ultimately throw away a great position was simply devastating. Thankfully, clear skies exist behind every storm...   The view 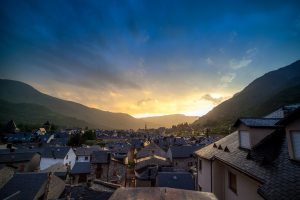 The beautiful view from my hotel room offered a nice mental escape after such a tough loss. I've found that photography can be a nice outlet from the pains of chess. 10 Decisive Games After the disappointing loss in round 7, I managed to win the remaining 3 games and finish in a tie for 19th place with 7/10 points. To my surprise, I had some of the best tiebreaks out of the 29 players who also finished with 7/10. The first tiebreak was number of decisive games and all of my games were decisive! As a result, I finished in 20th place and won 100 euros along with a trophy (one of my first trophies of adulthood!). 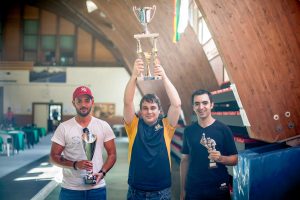 (L to R) GM Tamás Bánusz, GM Péter Prohászka, IM Eric Rosen
At the award ceremony, I met up with Grandmasters Tamás Bánusz andPéter Prohászka who were my teammates on the Webster Windmills in the 2018 season of the PRO Chess League. Congrats to Peter to finished in clear first with a stellar 8.5/10!   YouTube Similar to the FISCA Open, Kostya and I produced daily videos covering in-depth analysis our games. Readers are more than welcome to binge watch the following playlist:
[youtube
The final cross table and be viewed here
Kostya's Contribution: After my experience in Benasque, I'd have to recommend for every chess player to visit the Benasque Open at least once. The beautiful scenery, crisp air and delicious food means players can really enjoy themselves outside the actual rounds of the tournament. The relaxed one-game-a-day schedule allows for ample preparation time as well as some nice sightseeing/hiking. And the event itself was quite strong, boasting dozens of GMs, IMs, and norm-hopefuls, one of which turned out to be Eric's roommate for the event, who completed his final GM norm with a round to spare. My own tournament performance was on par with my level, and thus unspectacular. I lost my one encounter with a GM and allowed a few too many draws against lower rated players to get another chance, eventually finishing with a respectable 7/10, (with poor tiebreaks) and gaining 0.2 points. Since this was my third tournament in a row, I could definitely feel some fatigue setting in, but my games were nevertheless instructive, and I really enjoyed recording the post-mortem videos with Eric daily after the round. With all the games, preparation, YouTubing and touring that we had to do, I'm shocked we manged to fit it all in and still perform reasonably well! In what was a first for me, it was great to have Maya join us for the entire tournament. It seems like the organizers are pretty thoughtful about choosing the dates for the tournament. In early July the Benasque weather is nice and warm, but during this time it is not as busy with tourists in the small town as in August, when it actually gets quite crowded. So essentially we had this quaint vacation spot almost all to ourselves, a real treat. And that was before we discovered our eventual favorite 'hang-out' spot with Eric, Vuelvo Sola (I go alone), a hip vegan cafe with delicious smoothies and an amazing vegan burger that I still think about! That said, my main focus, of course, was the tournament, and despite how good life was on the outside I still tried to maximize my chances in each game. Unfortunately, I displayed poor technique in a couple games and allowed my opponents off the hook, leaving some crucial half-points on the table. But...let's focus on the highlights! The Stumbling King My favorite game from the tournament took place in Round 7, where I pushed and pushed and pushed in a drawn position with two rooks against the queen and finally managed to win on move 90. This was the second longest victory of my career, with the longest, a 112-mover, just having recently taken place in the decisive last round of the FISCA Open. Well, check it out: Post-Spain After Benasque, Maya and I first took a bus back down to Barcelona and then got a very cheap flight to Bordeaux, France. From there we met with two friends who were fresh from celebrating France's FIFA World Cup victory. We spent a few days together in Cap Ferret, a seaside vacation spot with some incredible food and lovely beaches. Our trip also included a stop in Arcachon to climb the Dune of Pilat, the tallest sand dune in Europe! From France, I then traveled to Santiago, Chile, for the 2018 Pan American Youth Chess Championships, which I previously wrote about here. All in all, this trip was quite rewarding. My next excursion is now not too far out--I'll be going to Spain for the World Cadet Championships, followed by a brief stopover in London to check out a couple rounds of the upcoming World Championship match.
SHARE:

Great analysis and videos! RAR is proud of you!
At what time were the rounds daily? I know that it use to be very common in Europe for rounds to be at 2pm or 3pm in the afternoon. Such a schedule would only leave the morning (and maybe night) for free time and preparation. Do they do it differently in Spain?
The rounds were at 4pm daily, which is a bit later than usual. The norm is typically 1-3pm. Despite the relaxed schedule, we had a lot of stuff to pack in each day :)
Kostya, if I counted correctly, that epic king march took your monarch on a tour of over half the squares on the board! Every student needs to see an endgame like this so they know not to get frustrated by the endless checks, but rather to search for the winning plan. Fun read as always from the two of you!
Oh wow, nice! Yeah, persistence pays off!
[…] Europe, and I knew that my friends IM Eric Rosen and IM Kostya Kavutskiy were also on the road.  It just so happened that we were all in Barcelona, and I invited them to visit me in my hotel for […]