The Adventures of Eric and Kostya - Part 1: Conquering Sunny Romania 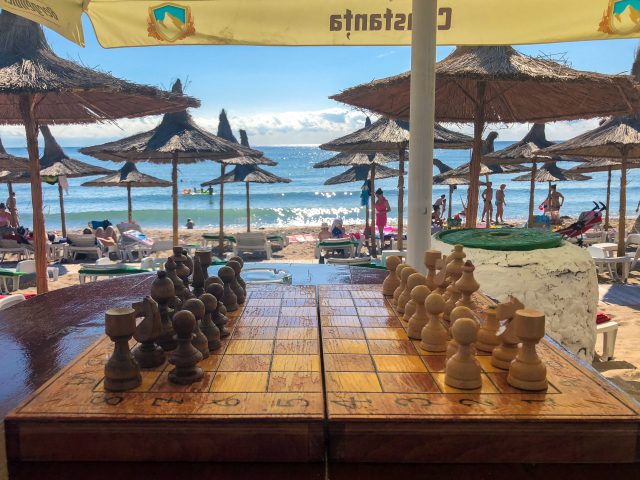 Chess on the beach, anyone?
Intro by Kostya Kavutskiy It was time for another epic summer Eurotrip to play some chess, visit some new places, and create a lifelong memorable experience or two! I looked at a lot of tournaments, but eventually decided on a few that I could link back-to-back without spending a fortune on lodging, entry fees, and other travel costs. I reached out to a friend, Eric Rosen, for ideas, and he suggested two events that we ended up playing together--first the FISCA Open, held in Cap Aurora, Romania, and then the Benasque Open, held in the lovely mountain village of Benasque, Spain. Perhaps to the surprise of readers, Eric and I have never travelled for a tournament together, despite being two of US Chess’s most prolific travel correspondents! This time our schedules lined up and we were more or less destined for an excellent chess-venture. Our goals were to play interesting chess, produce video content via Twitch and YouTube, and explore the local food and culture of each place we visited. Before the FISCA Open, which took place June 23-30, I played a GM-norm round robin as part of the Balaton Chess Festival, which hosted an IM-norm RR at the same time, as well as a small satellite open tournament. This took place in Balatonlelle, a quaint tourist town on the shore of Hungary’s largest lake, Lake Balaton. I tied for second in that tournament, but was well short of the norm. In any case, I felt battle ready for the next tournament in Romania. Mariana Ionita, the head organizer of the FISCA Open was very kind to myself and Eric, offering us a free room for the event, as well as transport to and from the Bucharest Airport (a good three hour car ride to Constanta, on the east side of Romania). The location was quite wonderful, Cap Aurora is a well-known vacation spot for both locals and tourists, as it’s situated on the shores of the Black Sea, with excellent beaches, restaurants, and street food vendors. 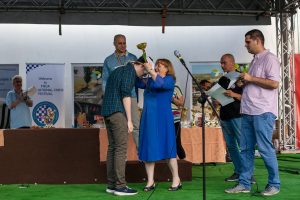 Tournament organizer, Mariana Ionita, awards Kostya a trophy, medal, and cash for his stellar 7.5/9 finish
The tournament worked out really well for me, I finished with 7.5/9 (six wins, three draws) in a tie for first place with the tournament’s top seed, GM Andrei Murariu, who ended up taking first on tiebreaks. On paper, after looking at the standings finishing second might not seem like a huge accomplishment, given that I played down in all my games, but the tournament was anything but easy. I started on 3/3, but in each of those games I was worse at some point, managing to outplay my opponents in some critical moments. In Round 4 I was paired with Eric, an unfortunate pairing but one that we felt was unavoidable in such a long tournament. I offered a draw about 20 moves out of the opening and we both landed on 3.5/4. In Round 5 I then had what many would consider a ‘miracle escape’! After a nice exchange sacrifice by my opponent, Romanian junior FM Victor Vasiesiu, I was on the defensive in the endgame, where I only managed to draw thanks to an unlikely resource in a lost position: After this bit of fortune I scored 2.5/3 in the next few games to reach 6.5/8, which was good for shared second with three other players behind the leader, GM Murariu who was on 7/8. The highest rated of these players, IM Teodor Anton, faced Murariu in the final round, the other two players on 6.5/8 faced each other on Board 2, while I played Black against FM Catalin Miroiu, who was on 6/8. It was a bit of bad luck to be paired against Catalin, as Eric and I met him earlier in the blitz event and had since hung out with him a few times, enough to consider him a local friend. But it was good fortune that he was half a point behind, as the tournament situation compelled him to play for a win and sharpen the game. Knowing that a win would give me a much higher place than a draw, even chances to take first, I was happy to play a sharp King’s Indian, which seemed suitable for Catalin as well. I found myself in control in the middlegame, with a free hand to attack on the kingside and a big time advantage, but several inaccurate moves caused me to lose almost the entirety of the advantage, keeping an extra pawn that was hard to push. Despite having caught up on time, with both players now playing on increment, I was able to maneuver my way into making slow progress and eventually converted after 112 moves! Here’s the game:     The top two boards in front of me both drew, allowing me to catch Murariu and tie for first place with 7.5/9. He had better tiebreaks throughout the event and deservedly took first, while I was quite happy to earn clear second after such a tough event. 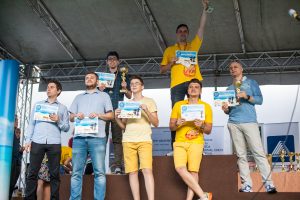 The winners! Kostya also took home 1500 Romanian Leu for his efforts
The tournament’s location and conditions were really excellent. Everyone involved with the tournament was quite friendly, and it seemed they were more than happy to welcome foreigners to participate in their local event. In addition to the tournament, there were some side events as well, including a fun blitz tournament where players were sorted on teams according to the (then ongoing) FIFA World Cup. I played the top board for ‘France’ while Eric represented Belgium. Neither of our teams won, however, as instead a group of strong Romanian juniors representing Uruguay played well throughout the event and ended up earning the most points as a team, collectively. 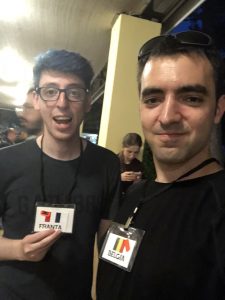 Eric's Perspective: A less desirable result, but still an epic experience.
by Eric Rosen
While my tournament performance was far less desirable than Kostya's, I must echo everything said about the tournament conditions. It's hard to complain with spending 10 days on the Romanian seaside, enjoying perfect weather and surrounded by delicious food and friendly people. This is one of the things I love about traveling to interesting and exotic places for chess: It's much easier to move on from a disappointing game (or several games in my case) when you're in a great environment. 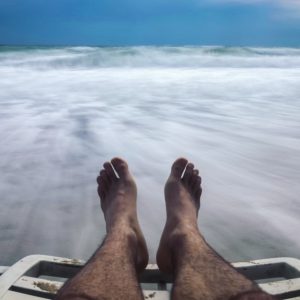 Pre-game and post-game relaxatoin
My start to the tournament was quite smooth. Going into round 6, I was tied for first place with 4.5/5, having given up only one draw to Kostya. I found myself on board 1 sitting across from the top seed, GM Andrei Murariu. After a nice opening with the black pieces, I failed to capitalize on my advantage. After a few inaccuracies, my opponent quickly got a crushing attack and finished me off in spectacular fashion. Here's the game:
After losing to Murariu, I struggled to recover. In the following rounds, I encountered some quite talented Romanian youth who posed me with many challenges. 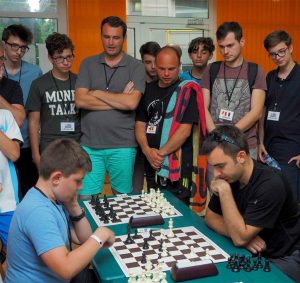 Never underestimate a young chess player from Romania!
For most tournaments that I play these days, I have two main goals: Enjoy myself, and take away some valuable lessons. For this event, I feel certain that I accomplished both. While I could spend hours delving into all the lessons learned, it would be easier to simply share the YouTube videos that Kostya and I put together throughout the event. After each round we candidly analyzed our games without engine analysis. This offered a great outlet to not only vent about a disappointing loss, but also provide some valuable educational content for the online audience.
[youtube
I would like to personally thanks Mariana Ionita and all the arbiters made this a spectacular event. I would also like to thank Radu Chirila, the father of Cristian Chirila, for allowing us to hitch a ride with him, for the 3-hour trek to Bucharest 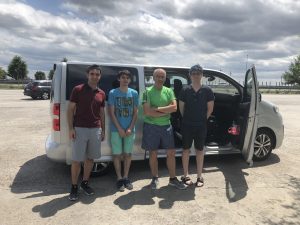 Fun read and interesting games. In the first game (Victor-Kostya), I paused to try to find the draw after 50.b6 (anticipating 51.Nc7) and after initially playing the natural recapture in my head, I realized the same thing and exclaimed it out loud (spoiler alert) "He doesn't have to take the knight!" Then, to see White's missed win was another nice lesson. Thanks for sharing Kostya and Eric. Great stuff!
Good article! I watched your videos on YouTube, and they were of a very high quality and had great analysis! Keep up the good work! Thanks for sharing your experience! Keep RARing!
[…] getting a strong dose of chess and beach at the FISCA Open, Kostya and I trekked our way west for the Benasque Open. With just four full days of […]