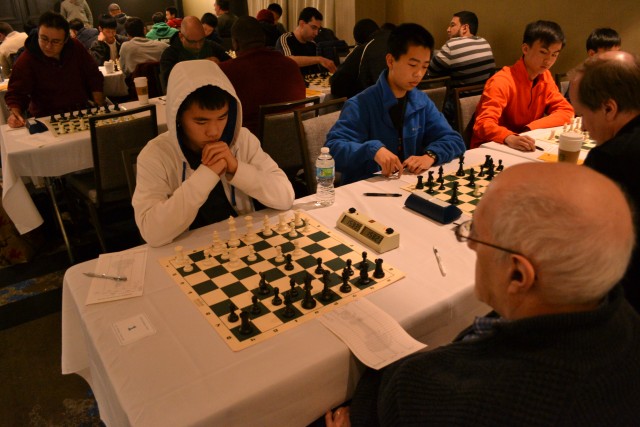 Monday night, after three days of play, six rounds and 3,500 games of chess, the biggest team chess tournament in the world came down to a single, nerve-racking game—on Board 2 of Table One. GM Kaufman's “Komodo Dragons” and NM Ethan Li's “Academy of Talented Youth 1” had won every match until taking aim at each other. Now, with the team score at 2-1 in favor of “Academy,” FM Karl Dehmelt had to win to put “Komodo” in a tie for first. He completed his assignment with relentless pressure culminating in a rook-sack that forced checkmate. Dehmelt’s clutch victory also did a service to “ChessNYC All Stars,” with FM Justus Williams on Board 1, and “Wei Yi,” led by GM Robert Hess. The two teams, trailing by a half-point going into the finale, had won their matches and joined a group of four at 5.5. As it turned out, “Academy” took first place on tiebreaks despite Dehmelt’s effort. The final standings: 1st Place: Academy for Talented Youth 1 NM Ethan Li, Henry Qi, Warren Wang and Wesley Wang 2nd Place: Komodo Dragons GM Larry Kaufman, FM Karl Dehmelt, NM Denis Strenzwilk, and William Michael 3rd Place: ChessNYC All Stars FM Justus Williams, NM Isaac Barayev, Matheu Jefferson, Tyrone Davis Tii 4th Place: Wei Yi GM Robert Hess, NM Andrew Ryba, Zachary Weiner, Marcus Sutton “Princeton A,” led by Jason Altschuler, collected the most tie-break points of the 5-1 teams to take fifth-place. According to tradition, the packed main hall voted with applause to award the distinction of Best Name, this year to “Hillary's Email: No Open Files” and gave the Best Gimmick designation to “Knock Out Knights” who danced down the aisle to rap lyrics, in boxing gloves and robes, a la Floyd Mayweather, Jr. 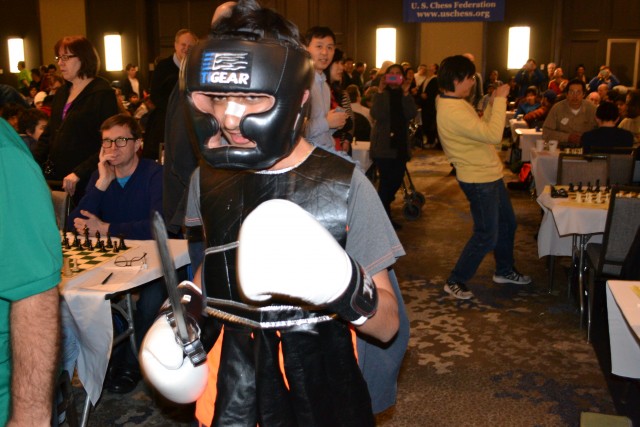 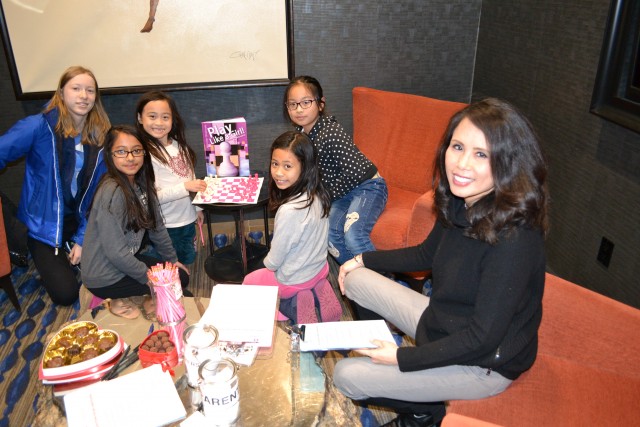 Top Board prizes are a special distinction at The Team. This year, FM Justus Williams of the “ChessNYC All Stars” was king of Board 1. GM Joel Benjamin, a World Team stalwart, took Board 2 honors. 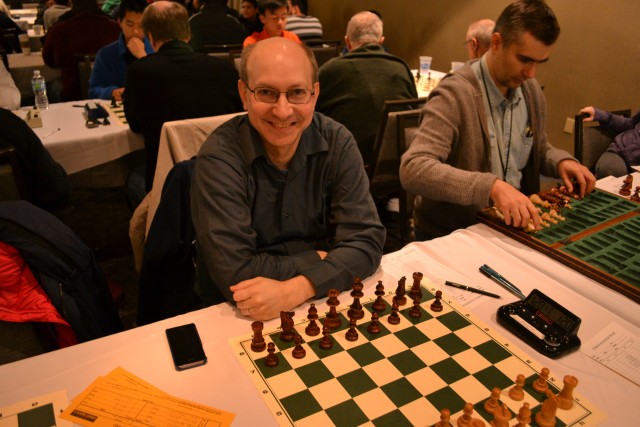 Three scored a perfect 6-0 on Board 3: Daniel Gordon of “Rookie Cookies,” Jason Shi of “Hello Mate!” and James Hiltunen of “Meet Us at Brooklyn Diner.” Board 4 winners were Dan Rade of “Man in the High 0-0,” Evan Ling of “Bb8?? R2D2 Wins Easily,” Tyrone Lii of “ChessNYC All Stars,” and Sally Yu of “Princeton B.” Jason Lu of “West Orange A” was best alternate. “Princeton B” took Best College team. “Millburn Dragons” earned Best High School. “The Sixers (Masterman)” was best Middle School, and “N(Knight)est Knights” was Elementary champ. The aptly-named “No Pawn Left Behind” won Military honors. “CKQ Lethal Weapons” won Mixed Doubles, and “Vasser Chadwick A Train,” a team name in keeping with this year’s jazz theme, won the Seniors award. Tom Bartell and Peter Minear teamed up to win the popular Sunday-night Bughouse tournament. The World Team confers a host of division and special awards, memorializing them with clock and plaques. For a complete listing, go here: www.njscf.org GM Larry Christiansen annotated one of his own trademark attacking wins. Pete Tamburro also annotated some fun games and finales:   This year’s edition of serious competition and frivolous chess-related fun, emceed by the entertaining showman E. Steven Doyle, in his 41st year of service to the event, came to a close as snow and sleet made the drive home yet another test. Steve’s talented crew always deserves our public thanks: Noreen Davisson, Bernadette Doyle, Bob Garrison, Dov Gorman, Joe Ippolito, Carol Jarecki, Aaron Kiedes, Jabari McGreen, Sophia Rohde, Mike Somers, and Howard Stenzel. They handle the complicated task with good humor and aplomb. Al Lawrence is the Director of the College Chess committee and will also be writing the article for Chess Life Magazine. Rainbow Unicorns won the US Amateur Team West (Sid Banik, Albert Lu, Cameron Wheeler, Alvin Kong) while Chakis-Mate (with John P Nardandrea, Lawrence Storch, Robert Persante and Peter Dyson) won the US Amateur Team South. Look for more details on those competitions coming soon to US Chess.
SHARE:

Wasn't it Harold Stenzel, now Howard (sic) Stenzel, who was part of the TD staff?
For the editor: No need to publish this note. Thanks for posting my game. Because of an error on my scoresheet, you give the White player as Wathall. I believe that the correct spelling is Walthall. You may wish to fix that one word. Regards...
It might seem like I put Mr. Yudasin under pressure, and made him lose on time because of that. The truth is, he made a mistake in his score sheet. I can only imagine his frustration when I pointed this out. But he graciously accepted the fact, shook my hand, and said "rules are rules"./Peter Korning
Yes, I agree. I believe Mr.Yudasin is a very humble and nice man
Old (aka Czech) Benoni setup is seldom seen? Certainly true for GM games, and amateur games too, I suppose. Still, I think a timelier and more useful comment would be along the lines of the rare Czech Benoni may arise more often now that longtime exponent FM Asa Hoffman's book about it recrntly hit the market.
Well, Jon, based on the thousands of scoresheets I collected, I didn't find any based on Asa's book. We are awash in Benko Gambits, King's Indians, Gruenfelds, and Nimzo-Indians and Dutch Defenses. Maybe the last two are due to my recent book, Openings for Amateurs, where I recommend them for two different styles of player. That would have been timely, too. Also, Al's deadline was Tuesday, and I was hurrying to get something annotated out for CLO. Thus, I spent more time on some games (like the amazing Jeremy Glassman game above) than others.
The West Orange Krush actually won the Senior prize with 4.5 points.
From Vassar-Chadwick A Train. Congratulations . We asked about that. I don't think our team was eligible for the prize anyway. Ernie Johnson
The Seniors category prize winners were West Orange Krush, not Vassar-Chadwick A Train.
Today I received this e-mail from Dr. Craig Fisher. Dear Jim, We are so sorry that USATE tournament organizers announced we won the seniors prize. Ernie Johnson , our team Captain, sent 2 emails to Steve Doyle telling him that we did not win the prize ... we weren't even eligible for it!! We have one player under 50 this year!!! However we never received a plaque, and never received anything. Only saw the early announcement that we won. If we receive any prize we would be more than happy to forward to you! CONGRATULATIONS on your 4.5 score and your win of the senior prize!! Blessings on you, your team and your club, Craig, President, Vassar-Chadwick Chess Club
[…] full results on the US Amateur Team North here. Also find our coverage of the US Amateur Team East, South and […]
Great annotations as usual Pete!
[…] promises exciting additions such as GM Eric Hansen, and local stars like GM Mac Molner.” Academy of Talented Youth won last year’s edition, and the winning team is back with one change: Ethan Li, Wesley […]