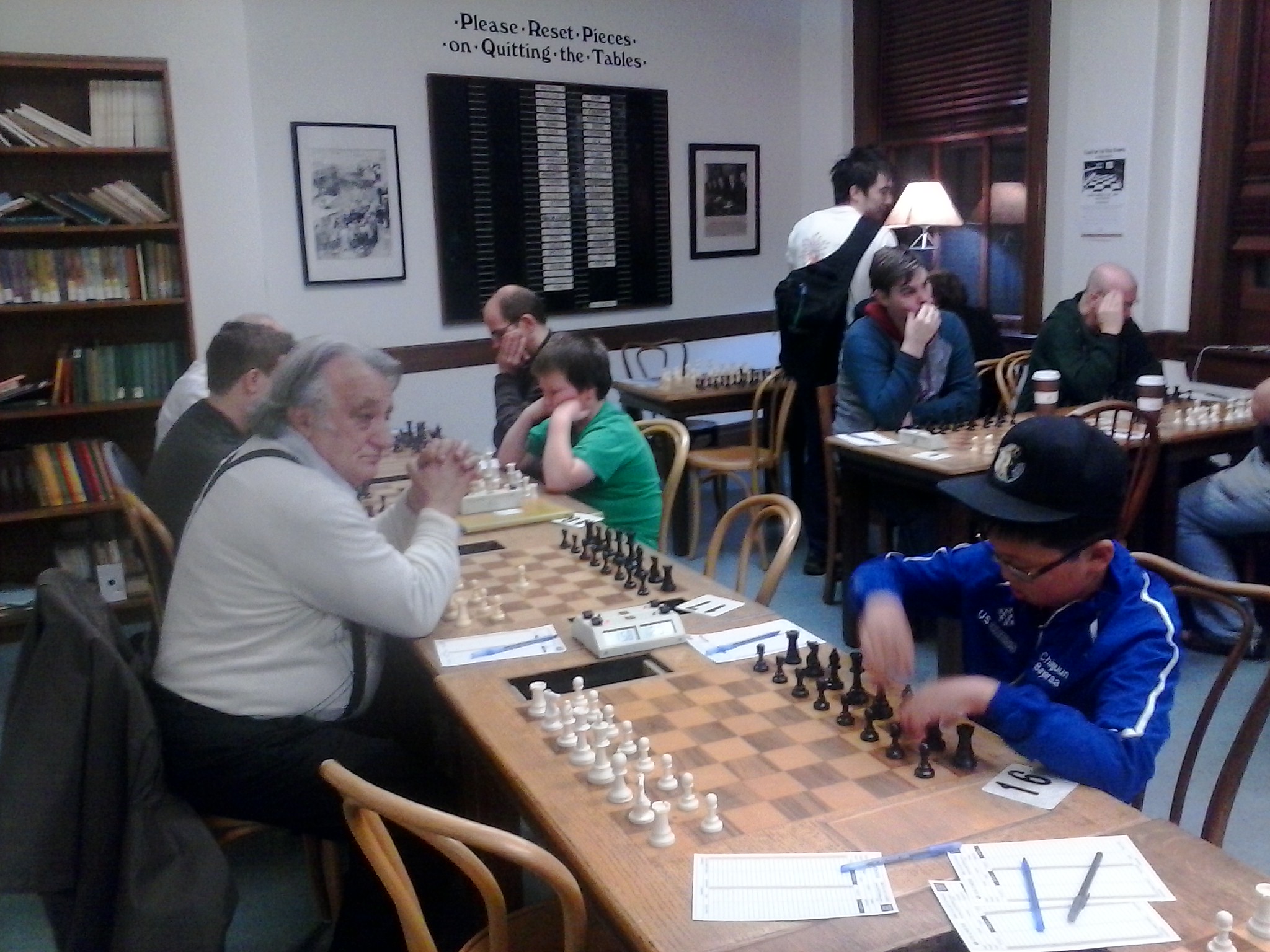 Photo Paul Whitehead
The oldest chess club in the United States, the Mechanics’ Institute Chess Club of San Francisco (founded December 1854), has held five Tuesday night tournaments a year since 1972. It broke its all-time attendance record on February 24, with 132 players participating in the recently concluded eight round Winter Tuesday Night Marathon. The tournament ended in a five-way tie for first between International Master Elliott Winslow, FIDE Master James Critelli and National Masters Natalia Tsodikova, Tenzing Shaw and Josiah Stearman. The growth of the T.N.M. can be documented by the fact that five years ago the attendance record was 86 players. Participation has been rising steadily since then with players of all abilities joining. The numbers include over a dozen players of Mongolian heritage and twice that number from the San Francisco tech community. The latter are keen players, but like many who play in the T.N.M. don’t have the free time needed to play in weekend events.  Older players find the one game a week format allows them to play their best without the fatigue issues of two or three rounds a day which are common for weekend tournaments. Approximately 20 percent of the field is over 65 years of age with players as old as 94 having played the past few years. The four hour time control (G/2) allows the event to be both USCF and FIDE rated and ensures the games are over by 10:30 p.m. enabling tournament participants to make it to work the next morning with a good night’s sleep. To make Tuesdays a destination night at the Mechanics’ a free weekly one-hour lecture is held before the round. Normally the lectures are given by the Mechanics' Chess Director, but about a dozen times a year there are guest speakers, usually Grandmasters. The past year this has included top American players Wesley So, Sam Shankland Daniel Naroditsky. This continues a Mechanics' tradition of bringing world-class players to the Institute that began with Johannes Zukertort in 1884. Since 2006 the TNMs have been FIDE rated enabling many regulars to earn and improve their international ratings. Thanks to Peter Sherwood, for close to a decade all the games from the Tuesday Night Marathon have been entered into Chess Base. They can be found at the club's website where they are available in PGN format and an online game viewer. The pairings for each TNM go up at noon on Mondays allowing participants the opportunity of having over a day to prepare for their Tuesday evening battle. Last, but certainly not least, many of the Tuesday Night Marathoners make use of the Mechanics’ Institute’s collection of over two thousand chess books and periodicals. 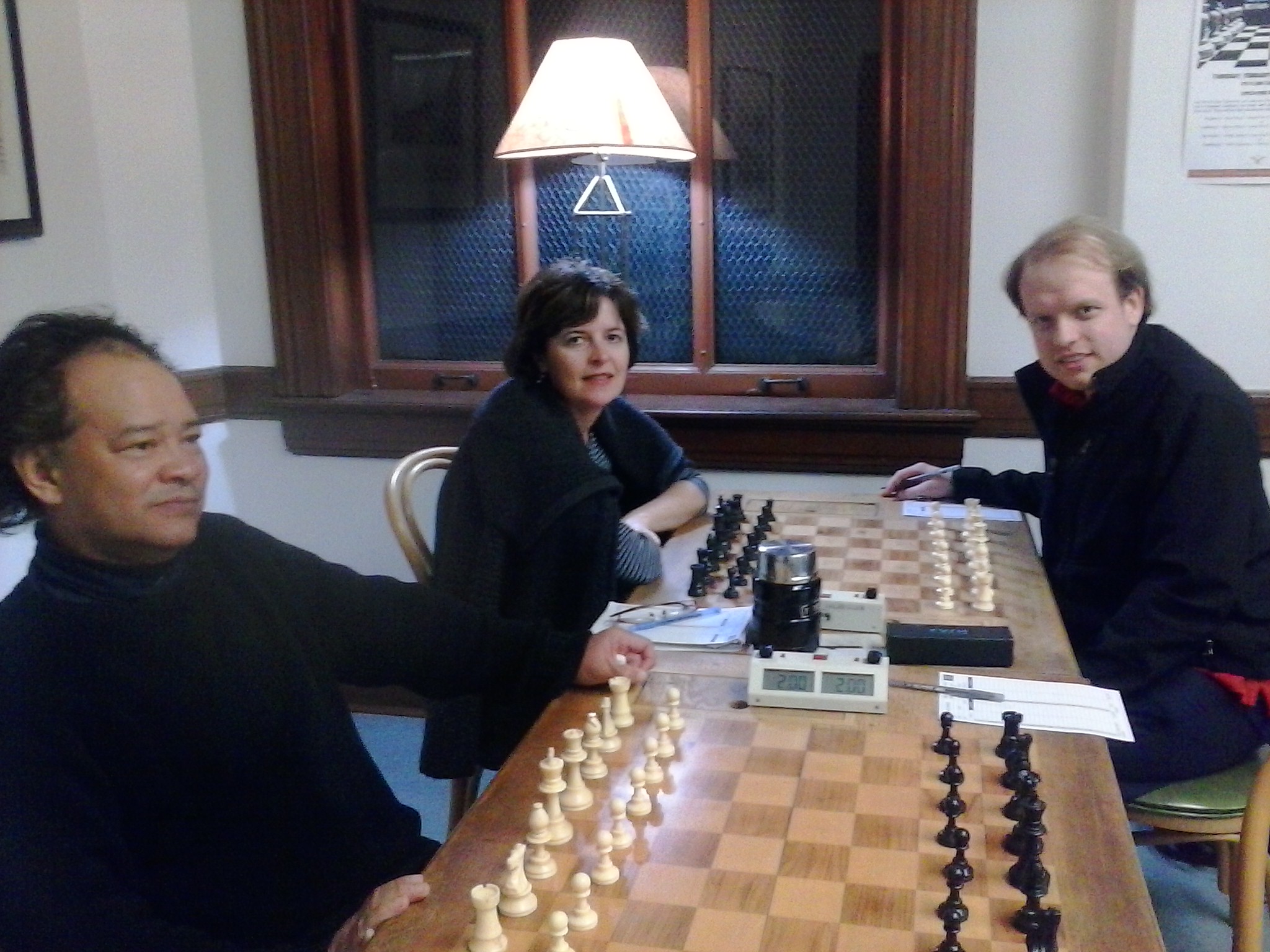 Photo Paul Whitehead
Those interested in learning more about the Mechanics' Chess Club may wish to visit its website at www.chessclub.org . Upcoming events include a blitz tournament with $750 in guaranteed prizes plus free books to all contestants on May 15th and a free scholastic tournament in Golden Gate Park on March 12th. Here is game from the Winter Tuesday Night Marathon that is a perfect example of Alekhine’s observation that amateur players also play games with interesting ideas.
SHARE: