New York is one of the top chess states in the country.  However, central New York has not enjoyed the same level of success in terms of both players and tournaments 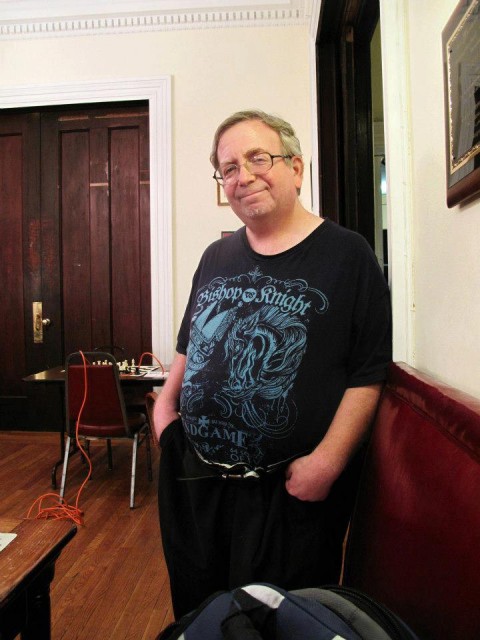 IM Jay Bonin
.  From 1995 until last year, there were no two day or longer tournaments in the Syracuse area,  the largest city in Central New York.  Last year, New York State Chess Association and Continental Chess Association President Bill Goichberg sought to change that.  He created the inaugural Central New York Open at Syracuse University, but the event was a bit of a disappointment.  In spite of a $5000 guaranteed prize fund, the turnout was modest and entry fees did not even cover the prize fund.   Not to be deterred, Bill again organized the Second Central New York Open at Syracuse University on October 17-18 and the results were more promising.  The entry fees were reduced (with a reduction in prizes), and the attendance not only remained the same, but the tournament was a bit stronger at the top of the wallchart. This year the Open section was won by IM Colomban Vitoux and FM Dov Gorman.  They drew a hard fought game in round three Neither player achieved a meaningful advantage, but that did not stop them from playing for a win. In the class sections, the winners were both paired up every round! John Montfort finished with 4 ½ and picked up 178 rating points.  His only draw was to Michael Miller who tied for second place.  Miller also won all his other games, but he signed up for a half point bye in round 4.  In the Under 1500 section, the lowest rated player in the section won the tournament. Tyshaune Mack got the bye as the lowest rated in round 1 hen was paired up 4 times and finished with 4 ½ points, picking up 407 rating points in the process.  He tied for first with Larry Goodman. More coverage, selected games, and full results can be found at www.centralnewyorkopen.com. Last minute decisions and half point byes are keys to winning Eastern Chess Congress The Eastern Chess Congress was held at the Sheraton Hotel in Stamford, CT from November 6-8th.  This year 121 players participated which was slightly more than last year’s total.  The open section was not as strong at the very top (only 1 GM), but was very deep – 16 of the 20 players were masters including 1 GM, 2 IMs, and 3 FMs.  Every section had a clear first place winner! IM Jay Bonin was a last minute decision to play.  He started as the 4th seed, but started with a round one half point bye.  He won his games in rounds two through four and then played a quick draw which wound up being good enough for 4-1, clear first place and $1000.   In the Under 2100 section most of the leaders had opted for last round half point byes before the tournament started.  Omar Cunningham was 4-0 and his half point bye wound up being good for clear first and $800.   This was nice to see because in the Boardwalk Open the previous weekend, Cunningham was on board one the last round and lost and walked away empty handed.  Omar won his way into these tournaments by winning both a team and an individual prize at the Greater New York Scholastic Championships.  He certainly made the most of his free entry! The Under 1700 section had a clear winner. William Xia started 4-0 and was a half point ahead of the field going into the last round. He played a quick draw to assure at least part of first place.  Board two drew which gave Xia clear first and $700. In the Under 1300 section, Long Hua entered the last round leading the field by a point.  He drew quickly to take clear first and $500. For complete coverage, selected games, and full results see www.easternchesscongress.com Past CCA tournaments can also be found at www.chesstour.com/cross.html.
SHARE: