The third round of the 2022 U.S. Championship featured three decisive games. All were won by White, and White was the higher-rated player in all three of these games. 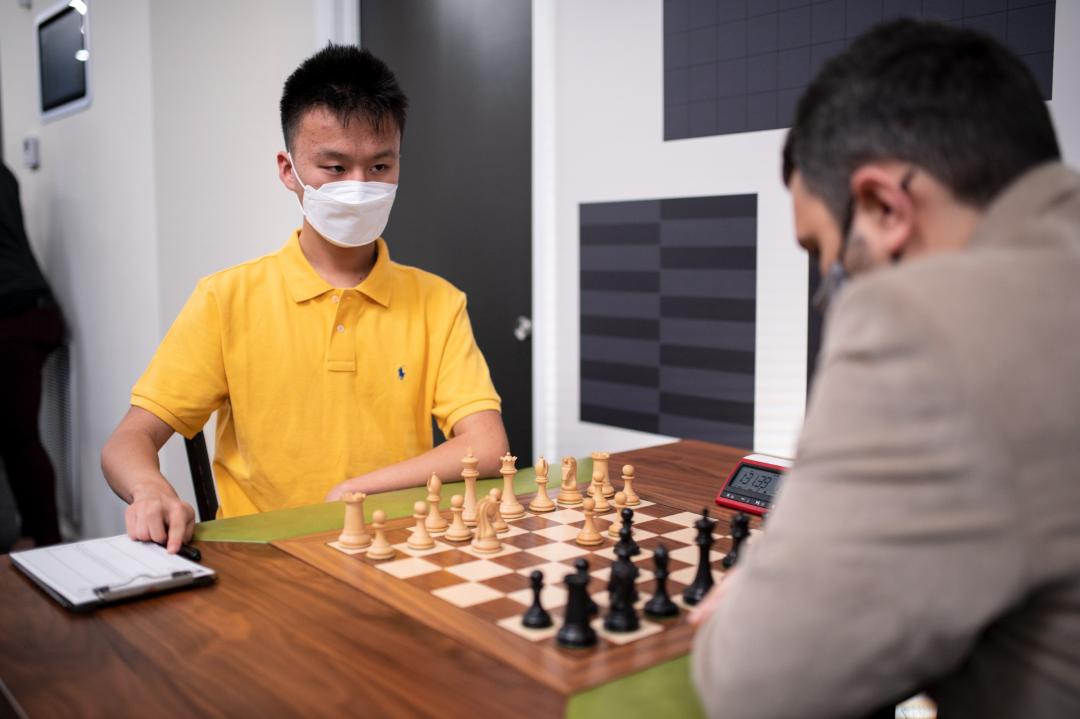 GM Christopher Yoo defeated GM Elshan Moradiabadi in an interesting Open Catalan where Yoo employed a novelty on move 14. After some inaccuracies, Moradiabadi had his chances, but lost his way in a complex tactical position.

Despite being the youngest player in the field, Yoo continues to earn respect with his second consecutive win.

The game between GM Awonder Liang and GM Aleksandr Lenderman was an interesting Slav Defense, although Liang admitted in the post-game interview that he was not very familiar with the line!

Despite being in new territory, Liang handled the middlegame tactics well and earned his first victory. 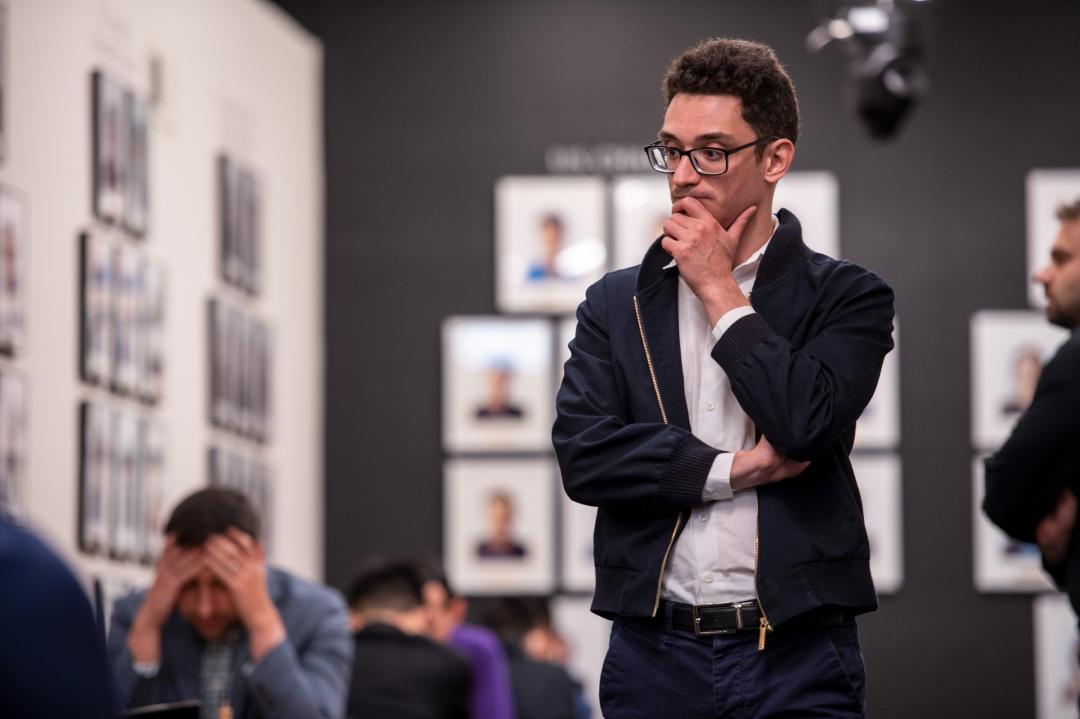 The game went back-and-forth and Swiercz had a good position, but he ran low on time and went astray to give former Champion Caruana his first victory. On the broadcast Caruana was critical of his own play and noted that he should have exerted himself more in one of the critical positions.

The other four games were drawn, but they all had their share of excitement. GM Sam Sevian and GM Levon Aronian played a topical Queen’s Gambit Declined with Bf4. Sevian had an advantageous endgame with an extra pawn and appeared headed for his second win, but as usual Aronian defended very well and was able to split the point. On the Saint Louis Chess Club broadcast GM Cristian Chirila noted that the chess engines liked White’s position, but it was not so easy to convert, and this turned out to be true.

GM Wesley So defended a Queen’s Gambit Accepted against GM Jeffery Xiong. Playing White, Xiong won a pawn in the middlegame at the cost of allowing opposite-colored bishops, and the game quickly resolved into a draw. GM Sam Shankland employed a new idea in the Nimzo-Indian against GM Hans Niemann, but after the White novelty, Niemann was able to neutralize the threats and hold the draw in an interesting endgame. The game between GM Lenier Dominguez Perez and GM Ray Robson was a Berlin Ruy Lopez featuring the main line with 4.0-0 Nxe4. The always well-prepared Dominguez Perez had a new idea in the opening, but Robson defended well and the opposite-colored bishop endgame resolved into a draw.

The third round of the Women’s Championship also featured three decisive games, and just like the Open Championship, all were won by White, and all three winners were higher rated than their opponents. 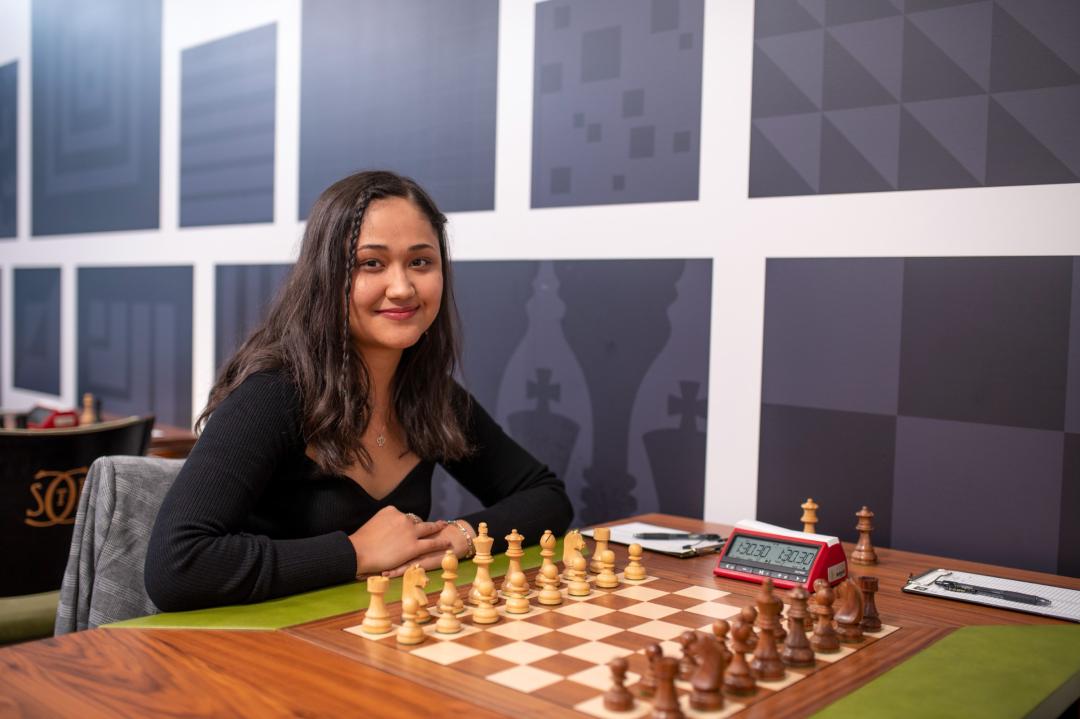 Both sides went astray in the complex middle game tactics, but Tokhirjonova displayed good technique to win an opposite-colored bishop endgame with an extra pawn. 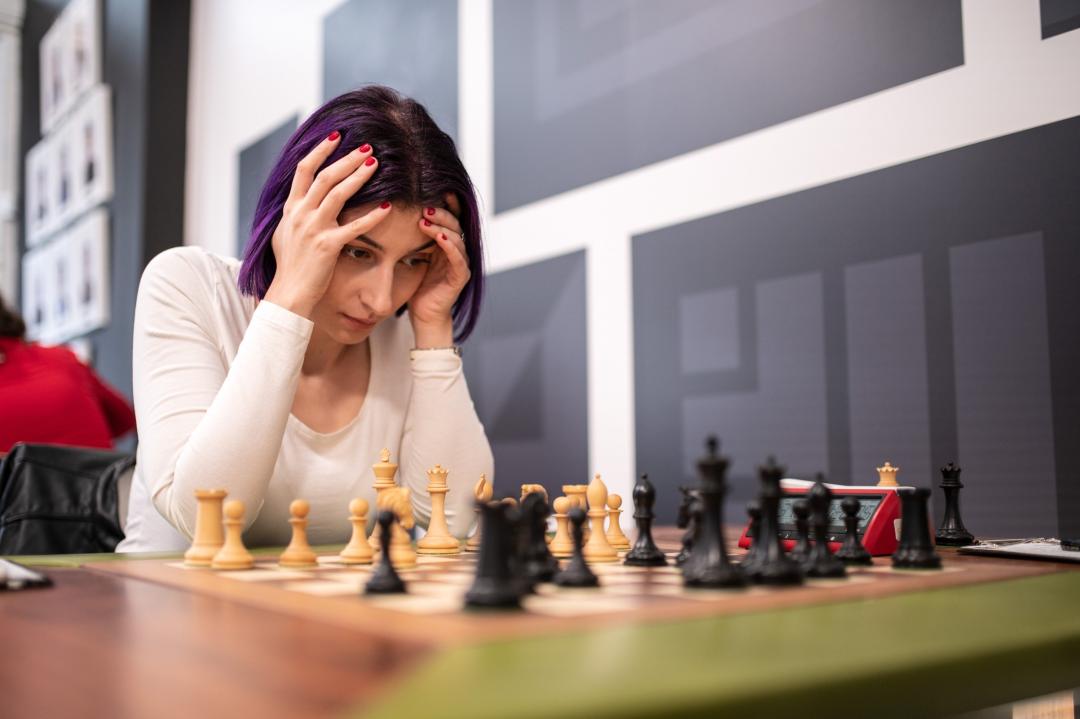 In our featured game, WGM Tatev Abrahamyan played the White side of a Giuoco Pianissimo. Abrahamyan won a central pawn and then crashed through with a decisive kingside attack.

The other four games were drawn. WGM Sabina-Francesca Foisor tried an Exchange variation of the Queen’s Gambit against IM Anna Zatonskih. Foisor developed some pressure with a minority attack on the queenside, but Zatonskih defended well to split the point. WIM Megan Lee and GM Irina Krush played a Sicilian Defense where Krush sacrificed an exchange and obtained a superior endgame, but Lee defended well in a pawn endgame to hold the draw.

In the matchup between FM Ashritha Eswaran and IM Nazi Paikidze, Eswaran had the bishop pair but was unable to generate anything versus Paikidze’s well-centralized pieces and a draw was agreed. The game between FM Thalia Cervantes Landeiro and FM Alice Lee featured the “Slow Slav” variation of the Slav Defense. An opposite-colored bishop middlegame ended in a draw by repetition. 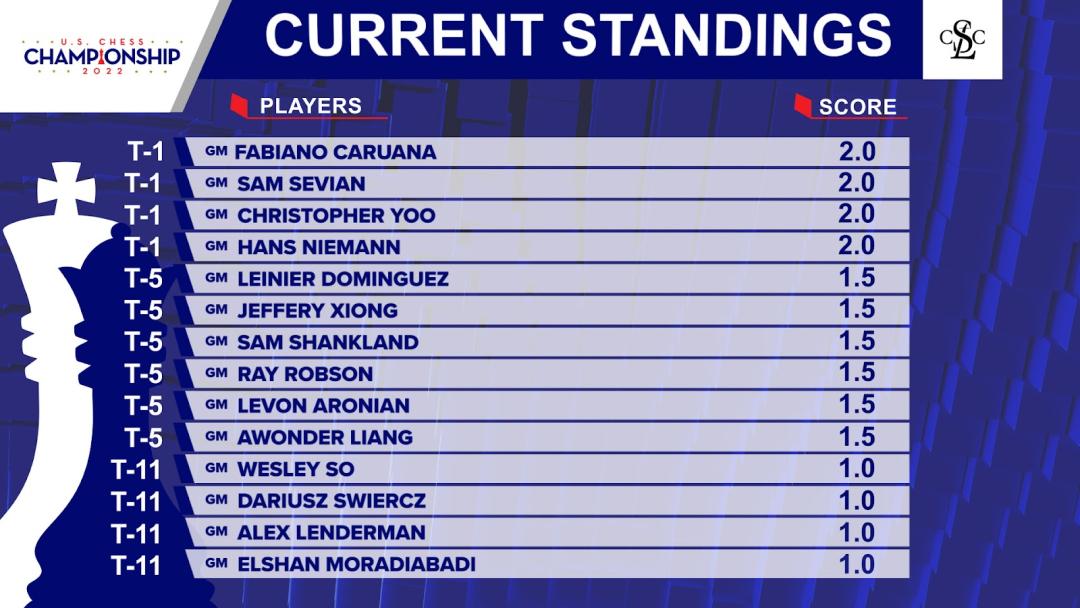 After three rounds in the Open there is a four-way tie for the lead among GM’s Caruana, Niemann, Sevian, and Yoo all at 2/3. Five players are half a point back with one and a half points, and four players are at 1/3. With only one point separating the entire field, everyone is still in it and anything can happen.

On the broadcast GM Yasser Seirawan noted that the wide age distribution of players in the field has led to some very interesting games so far – hopefully this trend will continue. Round 4 has some exciting pairings including So playing White versus Shankland, and Niemann playing White versus Caruana in a big test for the teenager. 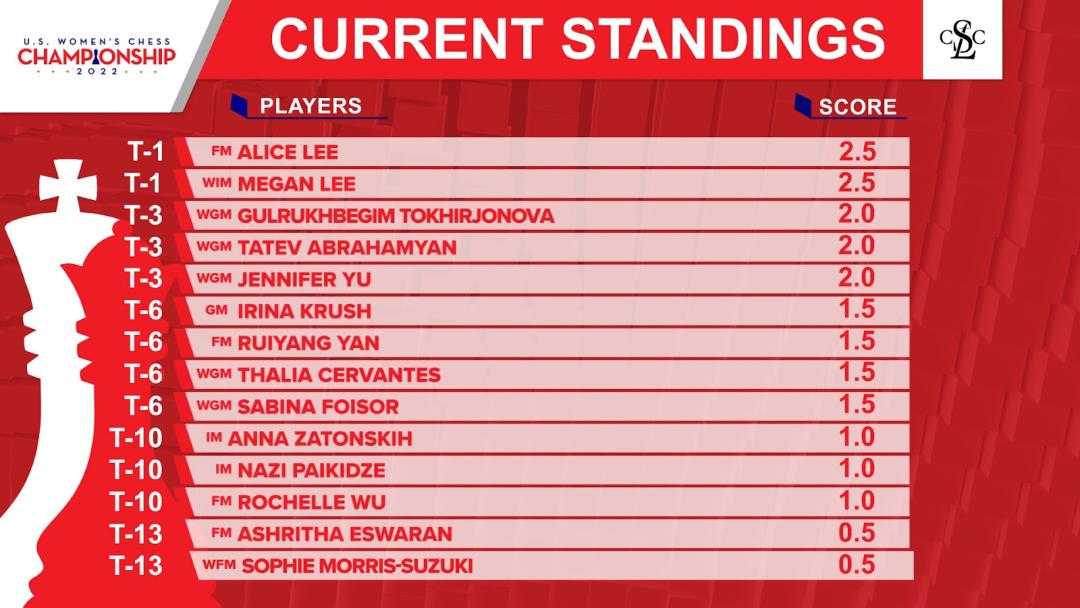 There is a two-way tie for the lead in the Women’s Championship with the Lees — FM Alice and WIM Megan —at 2½/3. Three players are a half-point back, and the next group of four players (including GM Krush) have an even score. Co-leader pairings are A. Lee versus Yan, and Zatonskih versus M. Lee, so we shall see if we have a single leader after four rounds of play.