With only one decisive game in the ninth round of the 2022 U.S. Open Championship, the standings remained relatively constant despite lots of action on the board. Meanwhile, the chaos in the Women’s Championship continued unabated with three decisive games, and once again, we have a new leader at the top of the table.

In the Open, wild card GM Awonder Liang continued to impress with his game against tournament leader GM Fabiano Caruana. As in some of his earlier games, Liang pulled out a museum opening of the closet, the supposedly dubious Damiano Petroff, with 3. … Nxe4, and managed to comfortably equalize. 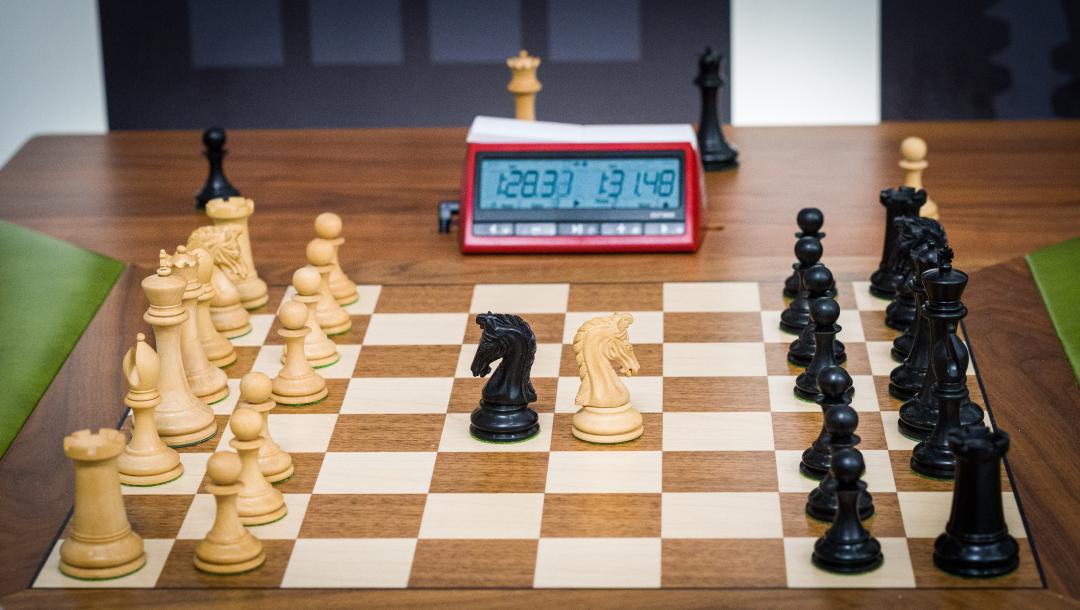 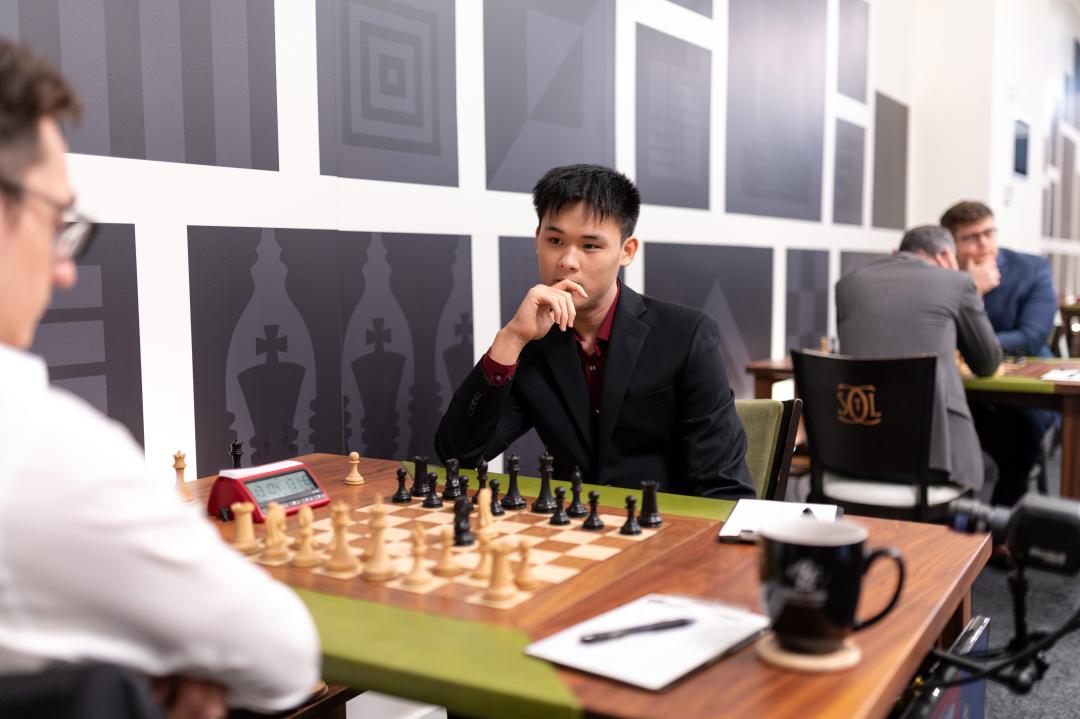 Look at that smirk on Liang's face! (courtesy SLCC / A. Fuller)

However, a couple of inaccurate decisions sent Black into an uncomfortable endgame where it seemed that Caruana missed several good chances for the win. In the end, Black saved the draw, leaving Caruana disappointed with having let another chance to increase the lead slip out of his hands.

Having missed winning chances in earlier rounds against GMs Hans Niemann and Sam Sevian, GM Sam Shankland was satisfied to put up a nice victory against his student, and the current U.S Junior Champion, GM Christopher Yoo.

In the remaining games, there was plenty of action, but only in the game between GM Leinier Dominguez and GM Sam Sevian did it look like the balance would tip as Dominguez appeared to have a solid advantage. However, tenacious and creative defense by Sevian allowed him to enter a drawish opposite-colored bishop endgame. 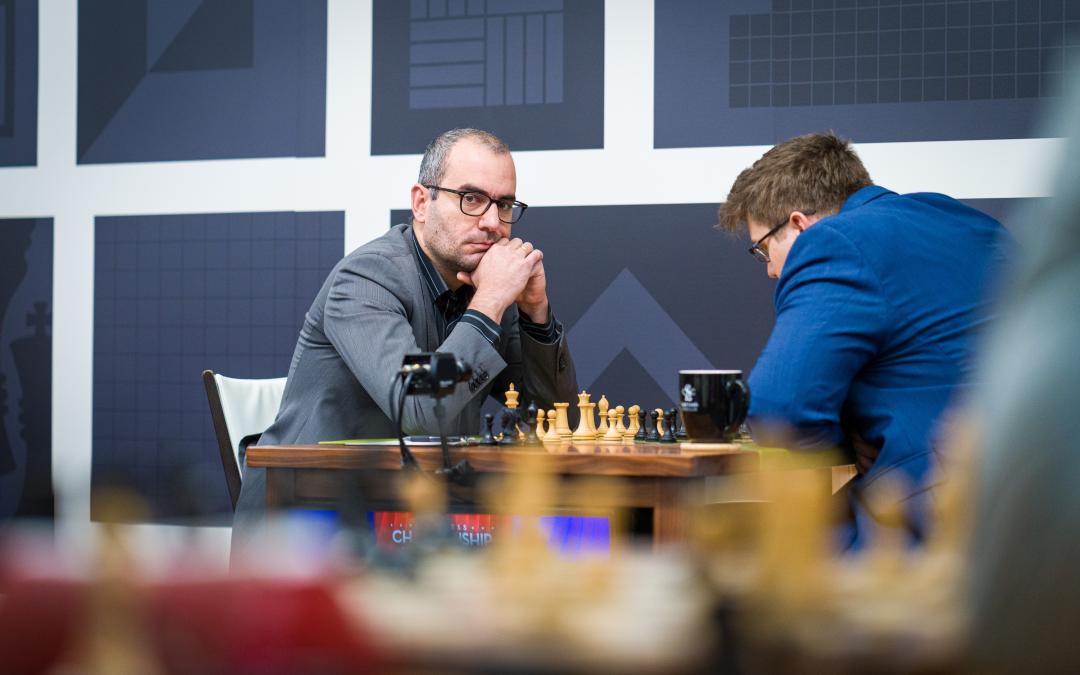 Dominguez kept trying before having to concede to a draw after 113 moves. But before the draw became a reality, he had several times made a move with one or two seconds left on the clock. This left the the on-site commentator team — and this reporter! — wondering if a heart rate of 190+ is normal for chess spectators. 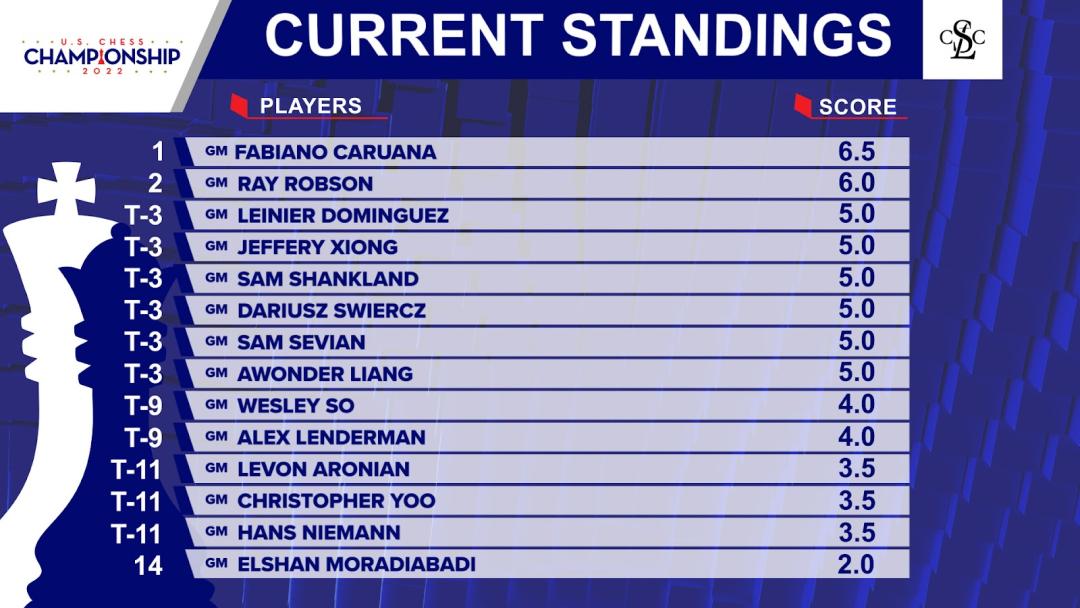 These results mean that Caruana still leads the tournament with 6½/9, half a point ahead of GM Ray Robson at six points. They are followed by a group of no less than six players a further point behind. Suffering a disappointing tournament thus far, the defending champion, GM Wesley So, is at four points, and I suspect he must now sadly realize that this year’s trophy will end up on someone else's shelf.

Meanwhile, the players in the Women’s Championship continued their all-out springs to the finish line, delivering another round of incredibly fighting chess, and once more shaking up the tournament standings.

WIM Megan Lee entered the round in the tournament lead, and had the black pieces against WGM Gulrukhbegim Tokhirjonova. “Begim” recently had an excellent result on board one at the Olympiad for the American women in Chennai, but she had struggled to get her game flowing in this year’s Championship.

Tokhirjonova sacrificed a pawn in the opening for excellent compensation, but after a combination of hesitant play by White and accurate defensive moves by Black, Lee managed to stabilize the position. 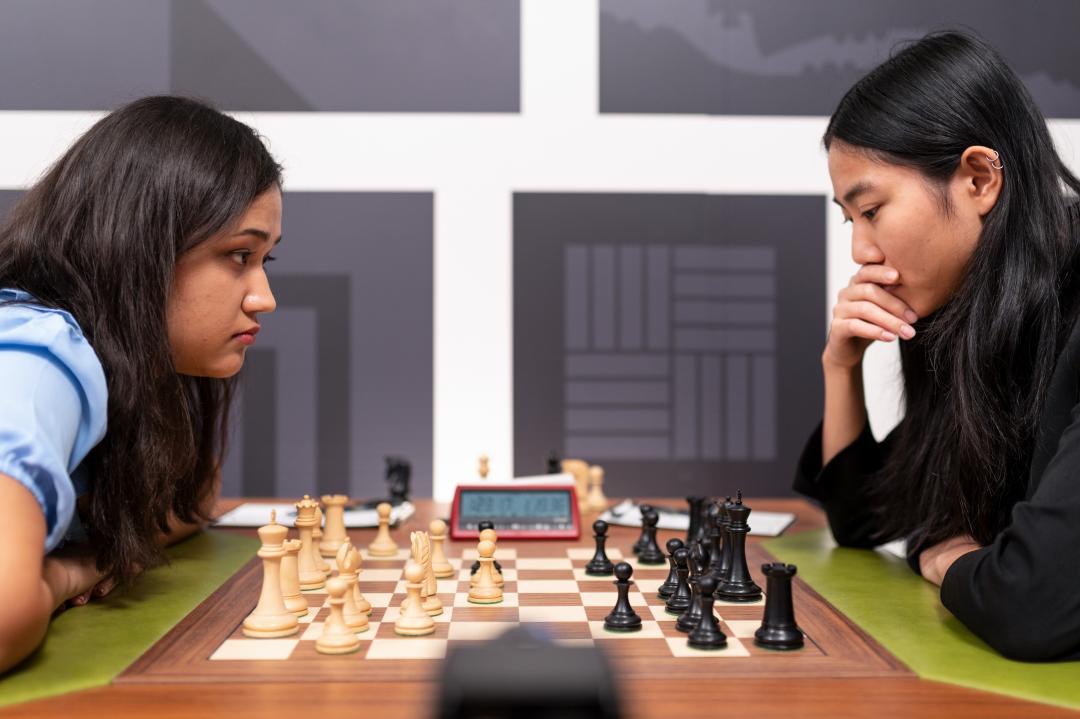 However, nervous blunders by Black on moves 27 and 29 afforded White the opportunity to decisively break through in the center, giving “Begim” a winning advantage that she duly converted.

Eight-time champion GM Irina Krush started her round out well, pressuring the youngest player in the field, FM Alice Lee, for the majority of the game. 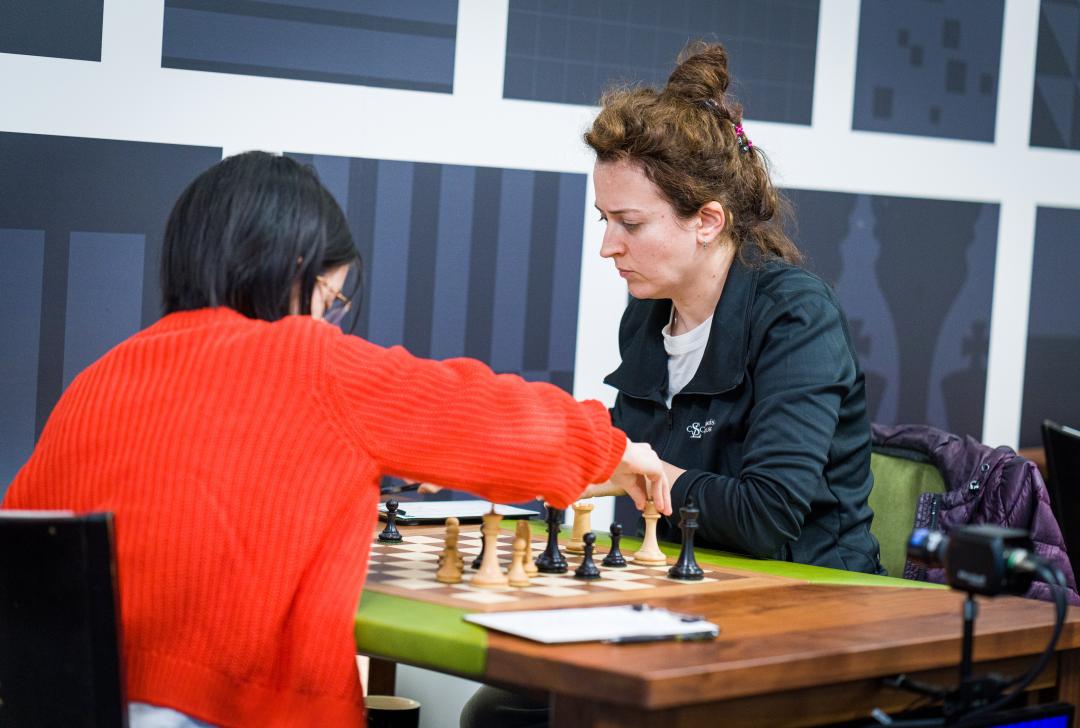 But after Lee had defended accurately and a draw began to look likely, Krush blundered on move 36, allowing White the brilliant 37. Nf4!. This would have been a killer had Lee found the correct 39. Kh2!, but instead she chose a different square for the king, allowing Krush to escape into an endgame which turned out to be a draw.

These results allowed FM Jennifer Yu to leap ahead by winning an excellent game on the Black side of a Caro-Kann Defense against FM Ashritha Eswaran. 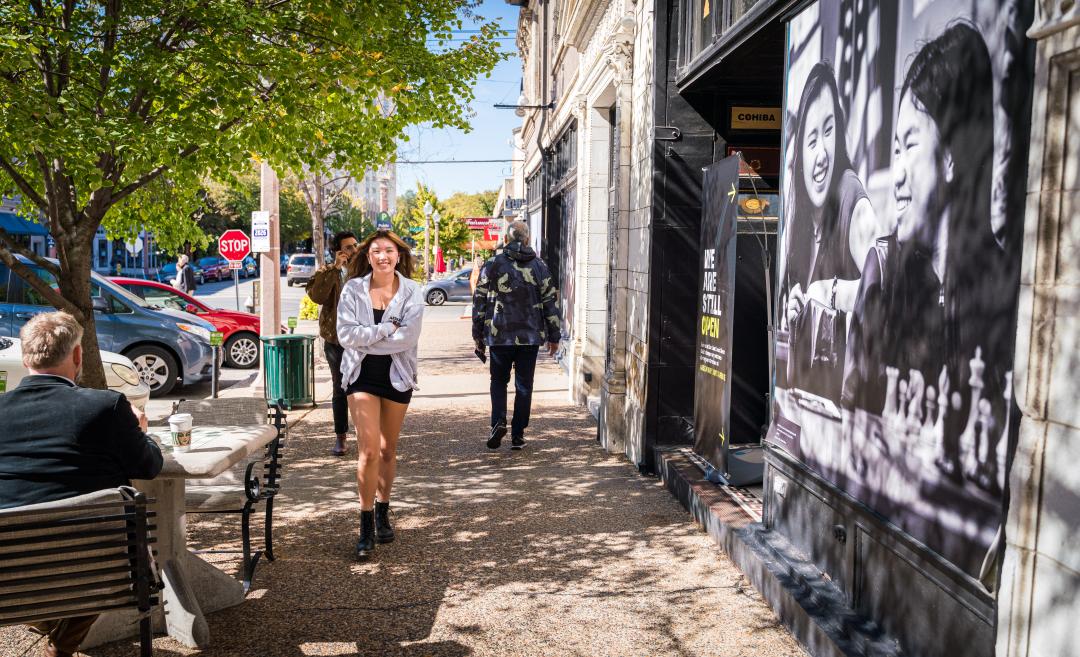 Image Caption
"Wait... is that me on the wall?" (courtesy SLCC / Ootes)

Eswaran first allowed Yu to equalize and then after a couple of inaccurate pawn advances gave Yu a growing advantage that was duly converted in convincing style.

In the previous round, WGM Sabina Foisor had won a nice attacking game, but in round nine, turnabout was fair play when she fell to a powerful attack by WGM Thalia Cervantes.

The remaining games — Wu versus Paikidze, and Yan versus Abrahamyan — were drawn, albeit in different ways. Wu and Paikidze found a repetition to share the point just after move 30, while Yan had to struggle against an unfavorable material imbalance to force a draw after 89 moves. 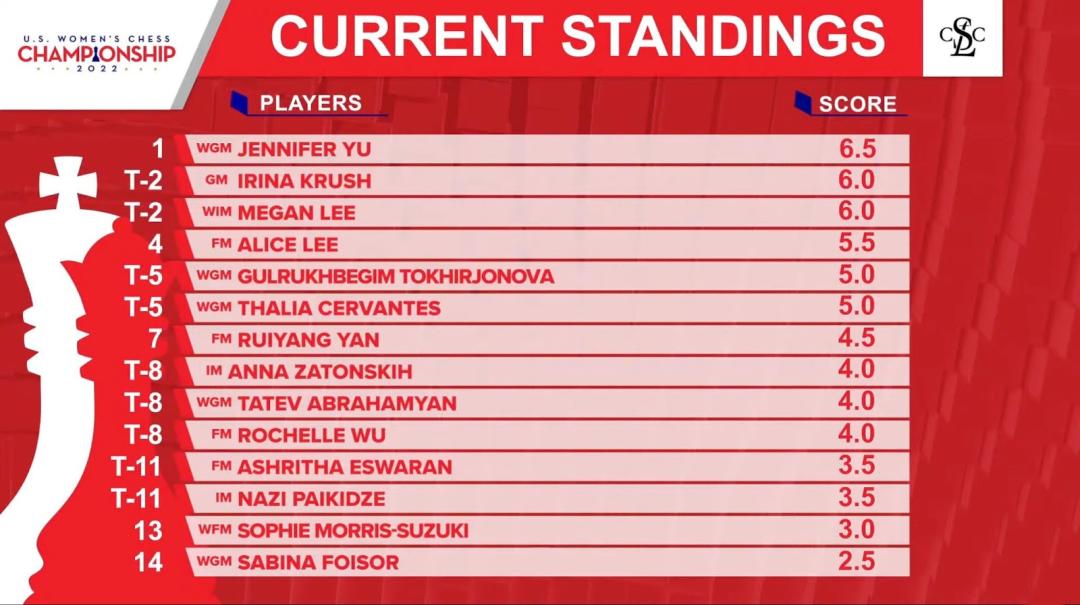 With four rounds to go, and with 6½ points, Yu is leading Megan Lee and Krush by half a point, with Alice Lee another half point behind at 5½. With several of the leading players facing each other in the remaining rounds, including Yu and Krush in round 12, everything is still very much wide open.

Has WIM Megan Lee earned WGM + IM norms? Her 6.0/9 score has a 2456 Performance rating, and she has played GM Krush, IM Zatonskih, and IM Paikidze.