The eighth round of the 2022 U.S. Championships saw the action calm down a bit in the Open Championship, with only two decisive games, while the Women’s Championship turned into another slugfest with five conclusive results. 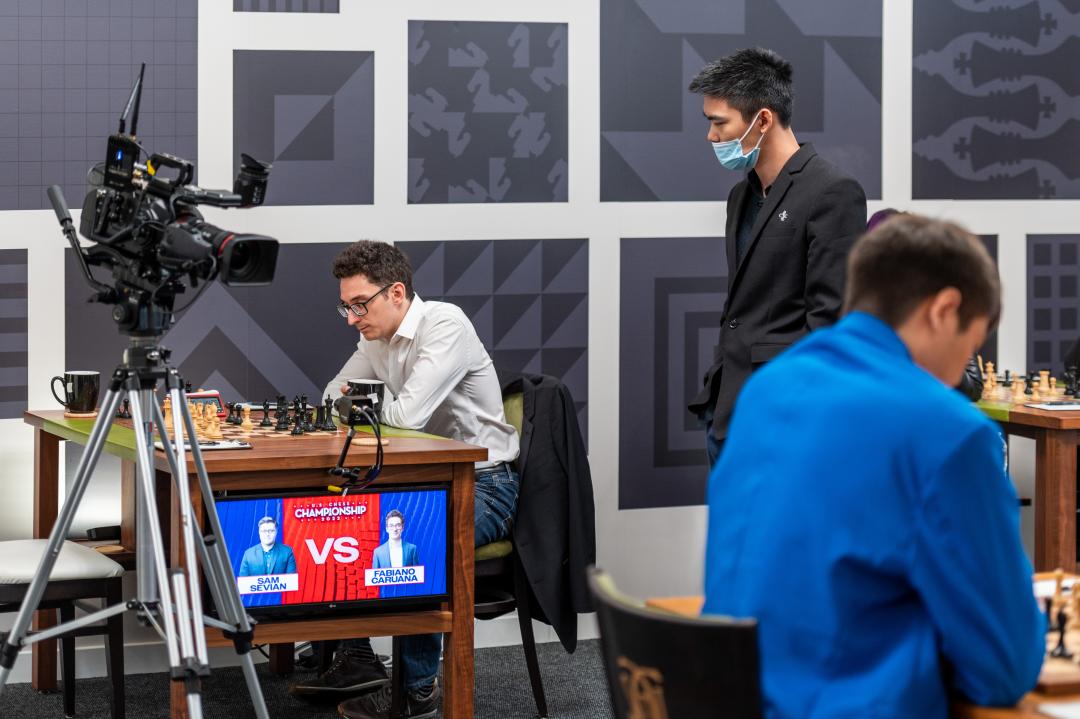 In the Open, GM Fabiano Caruana maintained his lead with a draw versus GM Sam Sevian, but he was probably disappointed, giving away a very large advantage which came out of some excellent opening preparation.

GM and new member of the “2700 Club” Ray Robson won his fourth game in a row and vaulted into second place, a mere half-point behind Caruana. 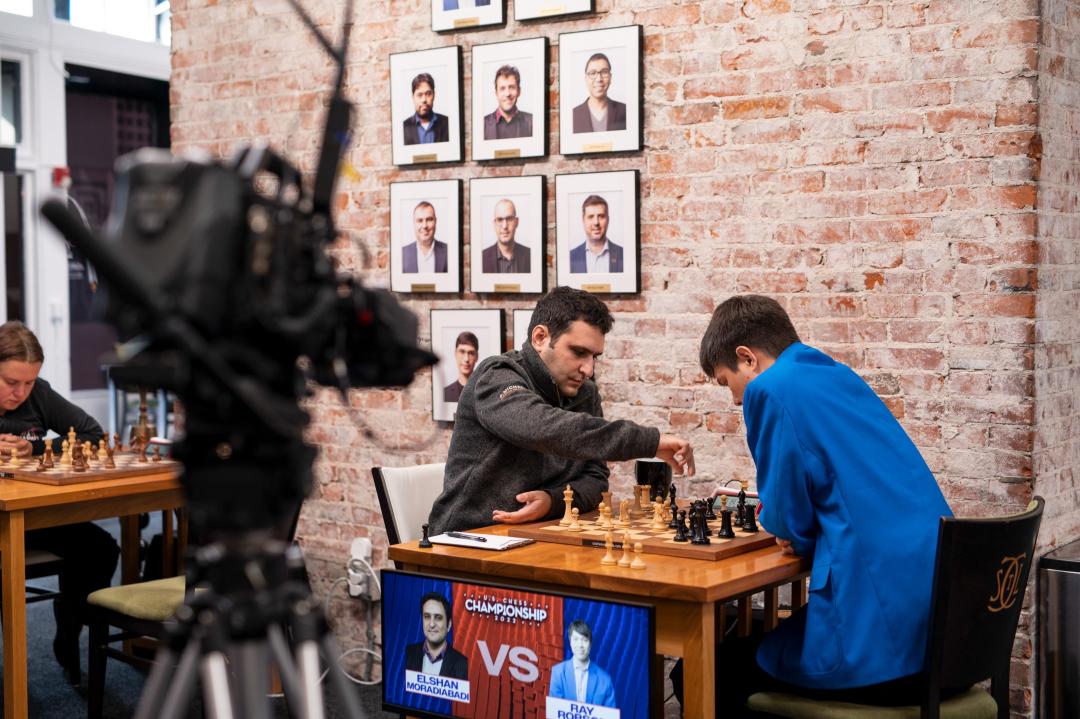 His opponent, GM Elshan Moradiabadi, is having one of those awful tournaments where everything goes wrong. In this game he played a perfectly fine opening, but when the time came to play a thematic central break he retreated, miscalculated a tactical sequence, and suddenly found himself lost. We’ve all been there.

GM Jeffrey Xiong improved his score to 4½/8 and joined a five-way tie for third place by defeating GM Christopher Yoo. Yoo stood somewhat worse in a complex ending, but mysteriously gave up a pawn and his entire position based upon some miscalculation or other.

This was another indication that after a brutal round seven, tiredness (or burnout) may have been a factor in this round. A well-known theoretical line led to as typically drawish position in Lenderman – Dominguez Perez. To shorten his defensive task, Black found a clever drawing trick and the game ended peacefully shortly thereafter. There was only one problem: Leinier’s trick should have lost immediately, and neither player noticed!

The other games were drawn. In Aronian – Niemann, Black achieved some pressure after the opening, but it wasn’t much, and after an equalizing break the point was eventually split. GM Wesley So got nothing out of the opening against GM Dariusz Swiercz and even fell under a little pressure, but the game soon petered out. The opening of Liang – Shankland seemed potentially promising for White and perhaps should have been, but Shankland reached an isolated pawn position that proved solid enough to hold on to draw. 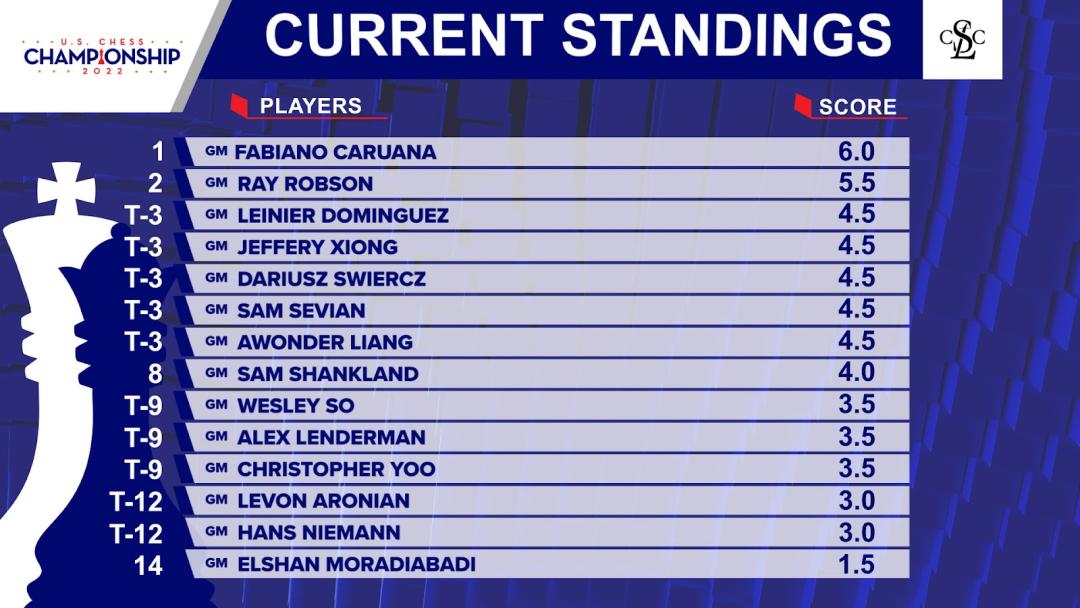 In the Women’s Championship, back-and-forth games were again the rule. 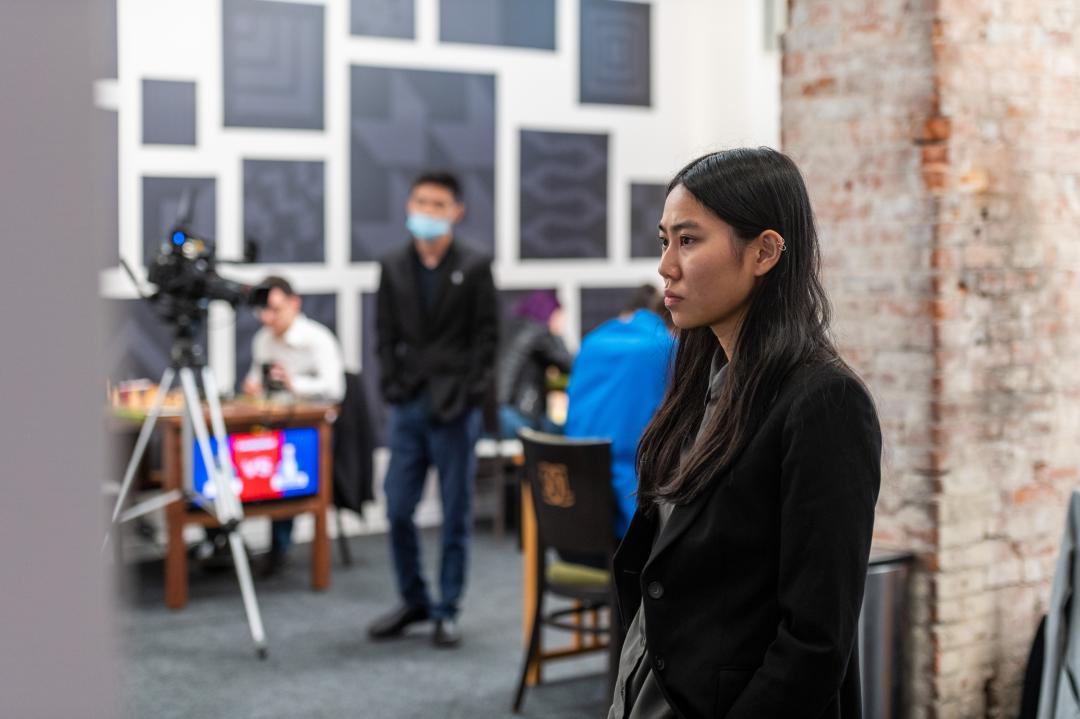 The most important game of the round was WIM Megan Lee versus FM Ashritha Eswaran, which propelled Megan to sole first place, a half-point ahead of GM Irina Krush and FM Jennifer Yu.

Krush as White achieved a winning game against WFM Sophie Morris-Suzuki, but one careless move allowed Black strong counterplay and after complications the players split the point.

Yu’s queenside attack proved faster than FM Rachelle Wu’s on the kingside and Jennifer moved back into a tie for second place.

After six draws and a loss, FM Thalia Cervantes scored her first win in a wild game against WGM Tatev Abrahamyan, culminating with a pretty attack.

WGM Sabina Foisor defeated WGM Gulrukhbegim Tokhirjonova in a nice, if flawed, attacking game. FM Alice Lee came out with an extra pawn as Black against IM Nazi Paikidze and benefited from a miscalculation by the latter. IM Anna Zatonskih came out of the opening with a clear advantage as White versus FM Ruiyang Yan, but Yan escaped with a draw. 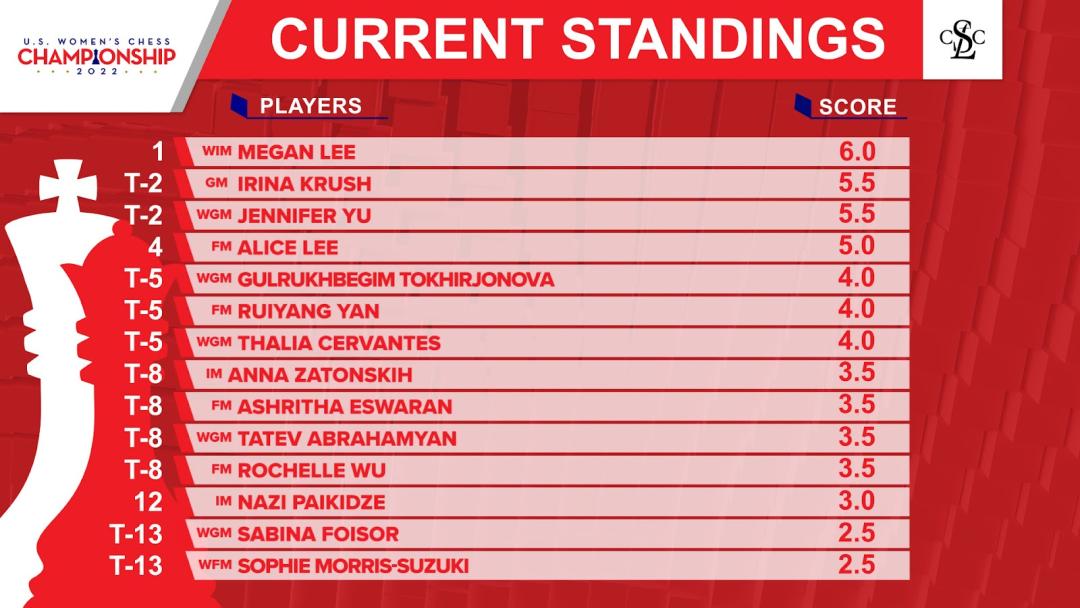 Megan Lee was my fourth FIDE…

Megan Lee was my fourth FIDE rated opponent in the 2012 U S Open(the last U S Open to date to have been FIDE rated). I scored 1.5 points against FIDE rated opposition in that event. That earned me a FIDE ratable performance. I eventually completed the requirements for becoming FIDE rated. My current FIDE rating of 1612 can politely be described as laughable. So I am rooting for Megan Lee to win this years U S Women's Championship.