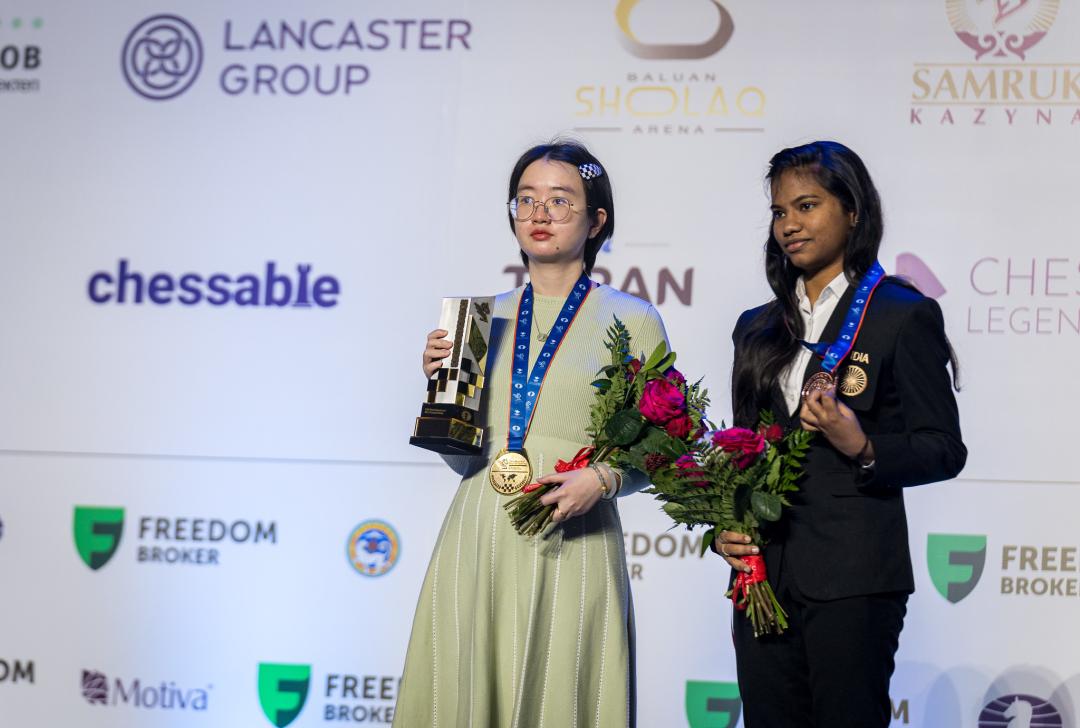 GM Tan Zhongyi’s reign of terror continued in Alamaty, winning the Women’s World Rapid Championship just weeks after winning her half of the Candidates in neighboring Uzbekistan. 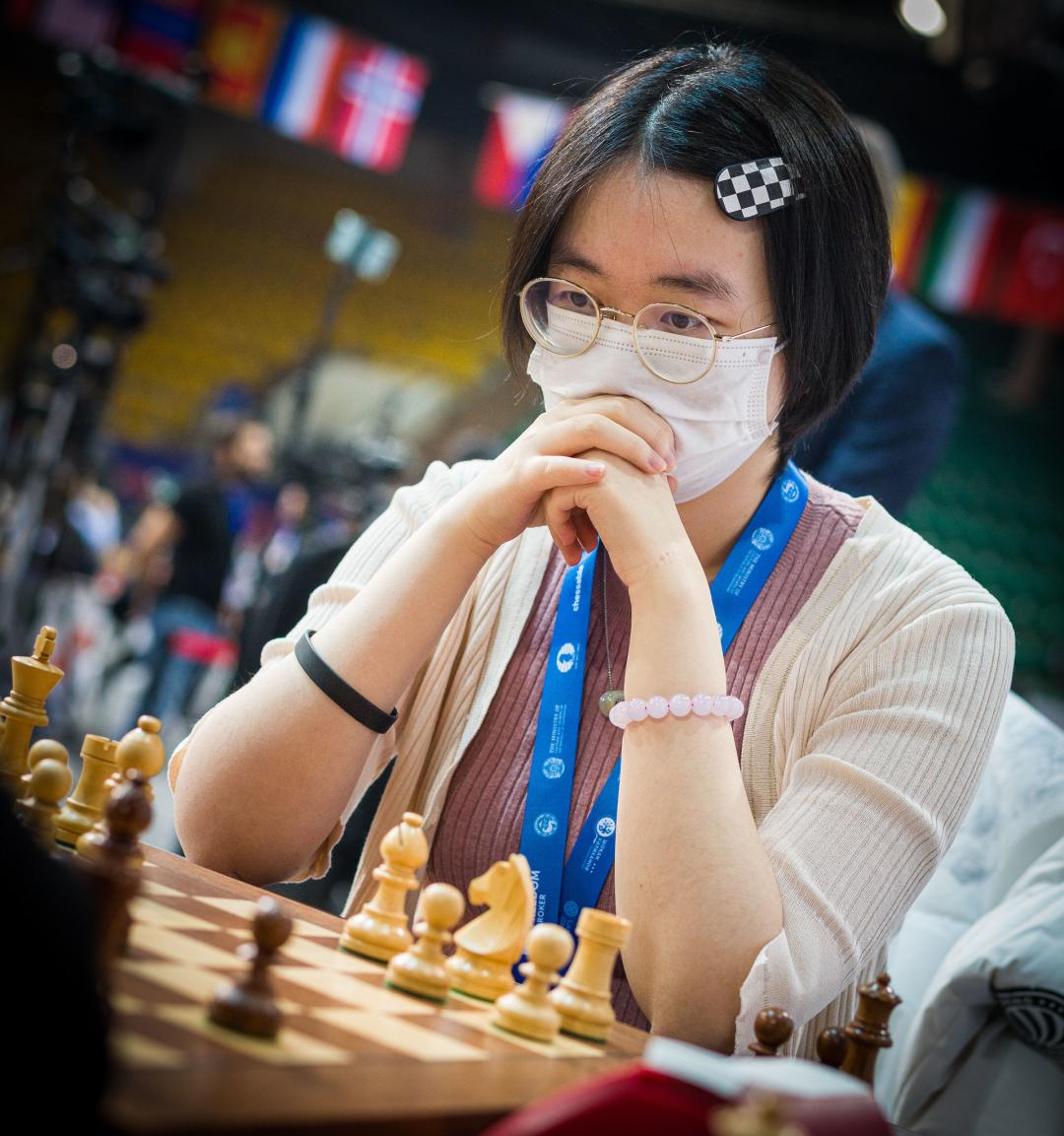 In a familiar scenario, the three other highest rated players in the event were the same Russian grandmasters (Alexandra Kosteniuk, Kateryna Lagno, and Alexandra Goryachkina) who the Chinese grandmaster outplayed in Khiva earlier in the month. 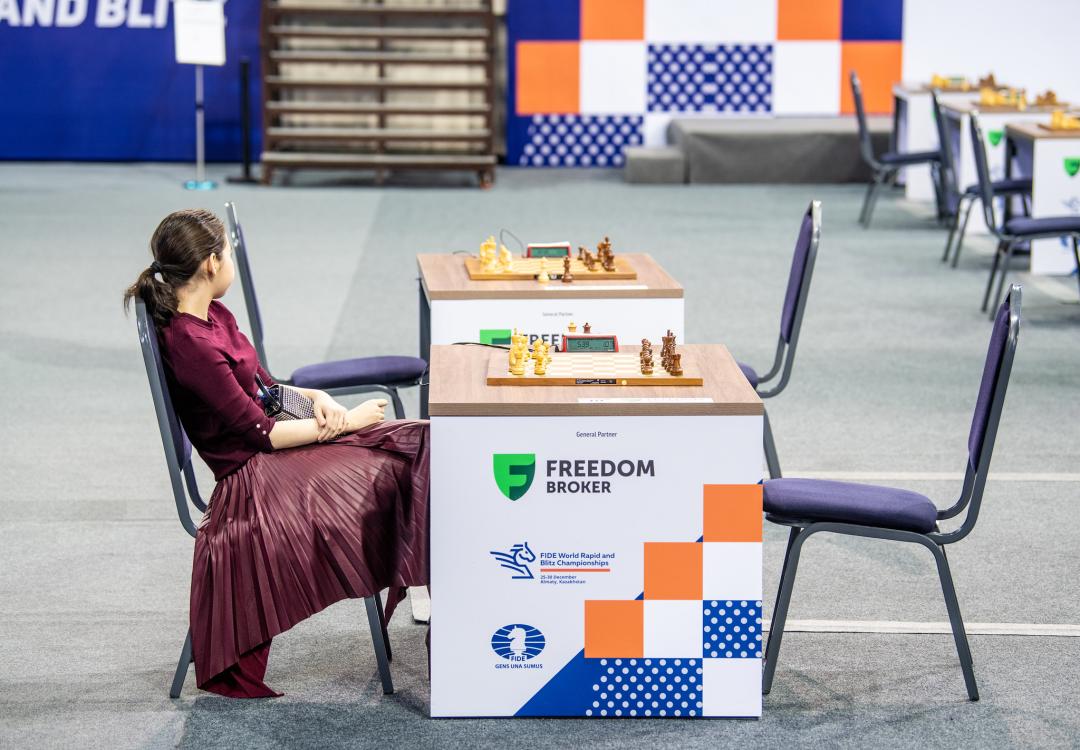 After eleven rounds of play, Tan was tied with Uzbek IM Dinara Saduakassova with 8½/11. While the local IM was the highest-rated non-grandmaster in the event, her finish was still something of an upset considering the giant names she had to topple to earn her score. 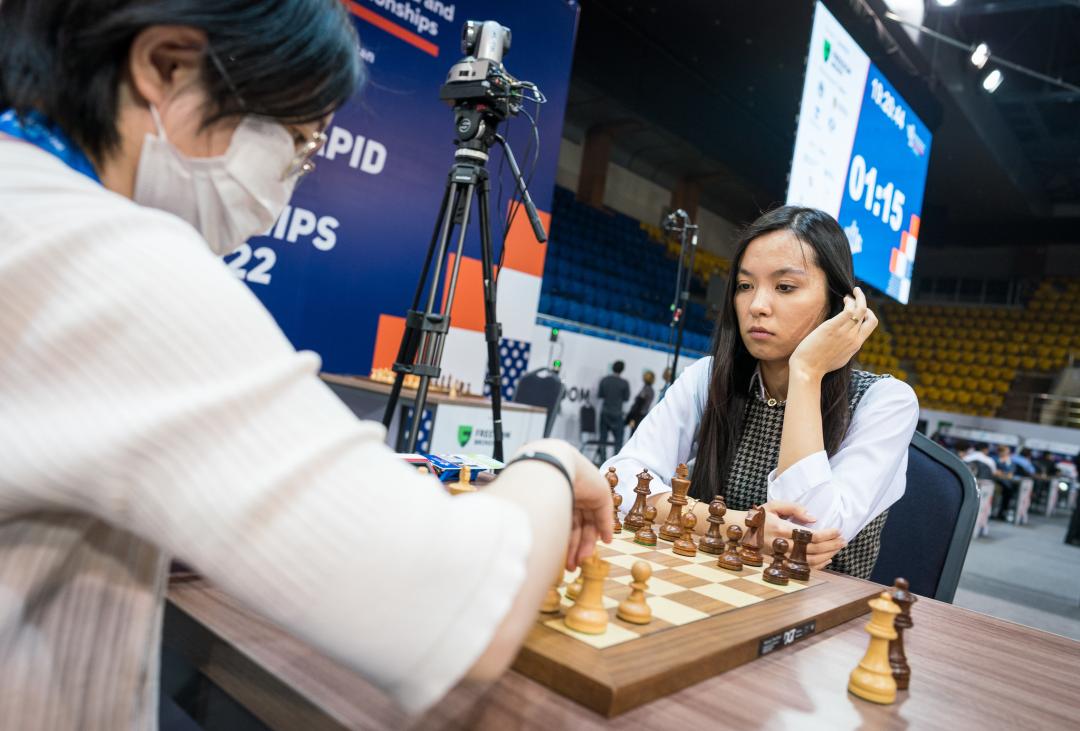 A much more surprising face on the podium was Indian WIM Savitha Shri. The 2311-rated player was one of the local talents on display in the Tata Steel India Rapid and Blitz, but her last-place 1/9 finish in the rapid event made her quite a dark horse for a medal. 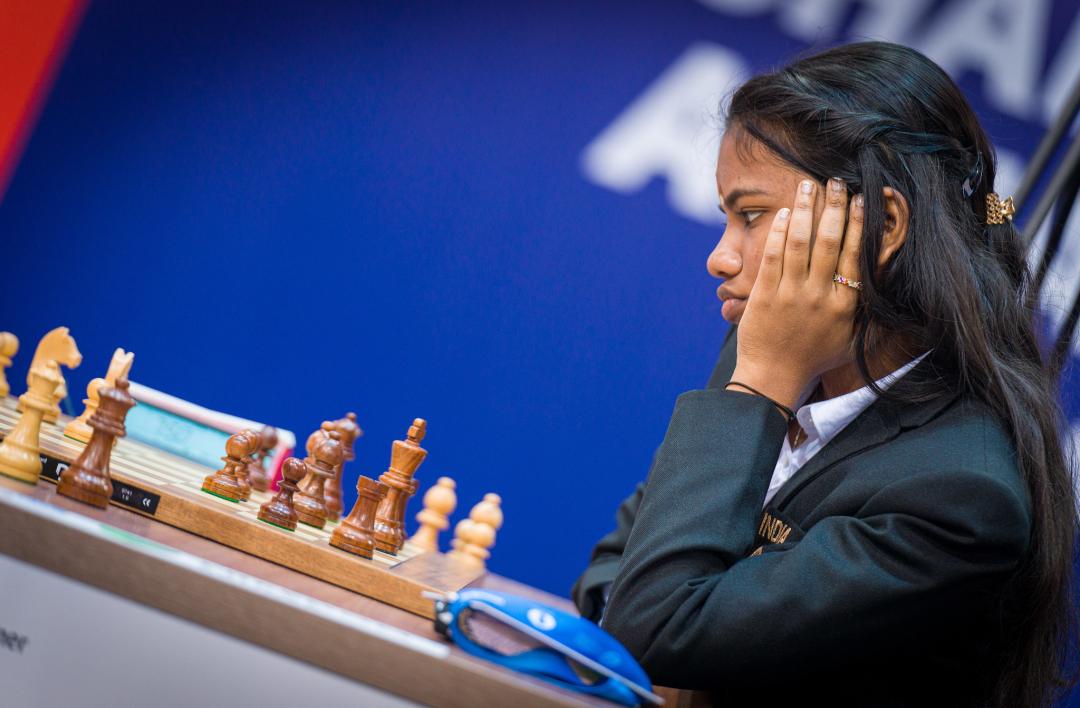 Five players entered the final round with a chance of finishing first, but the excitement was overshadowed by the frustration upon realizing that, in the likely outcome that three players finished tied for first, only two would play the resulting tiebreak. The open section experienced a similar issue last year, and responded by changing the rules for ties, but surprisingly no adjustment was made to the Women’s section.

That said, as it happened, Saduakassova happily took a quick draw against Shri, Tan defeated Georgia’s GM Nino Batshiashvili, and all eyes came down to board two. 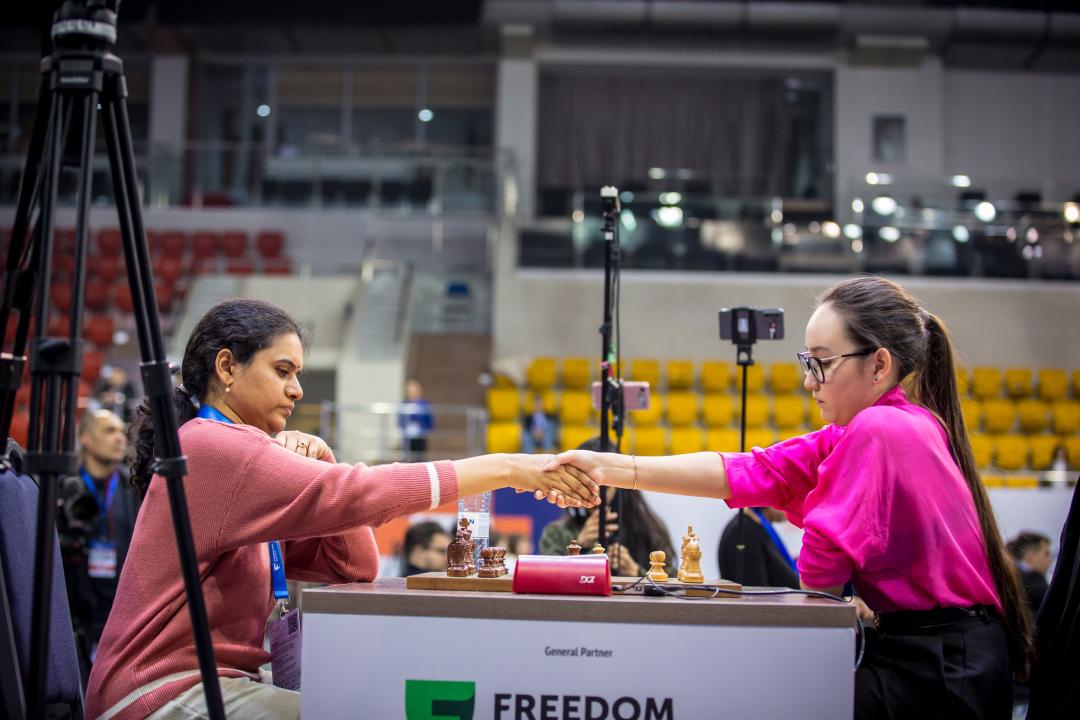 If either Kazakh GM Zhansaya Abdumalik or Indian GM Humpy Koneru could win, there would be a three-way tie for first, but the two players ended things peacefully.

In the tiebreaks, after drawing their first blitz game, Saduakassova had a slightly better position with the white pieces in an endgame that seemed to pose virtually no risk. Then, one committal pawn push, followed by one passive rook move, and she had to be careful to hold the draw. Her opponent quickly coordinated her remaining pieces around mobilizing her pair of central pawns and clinched the tournament-sealing victory seemingly out of nowhere.

Only four Americans competed in Almaty, with most of the recent US Champions skipping the event. One former champion, however, got off to a dream start. IM Anna Zatonskih, who won four national titles between 2006 and 2011, finished the first day on 3/4 against stiff competition. 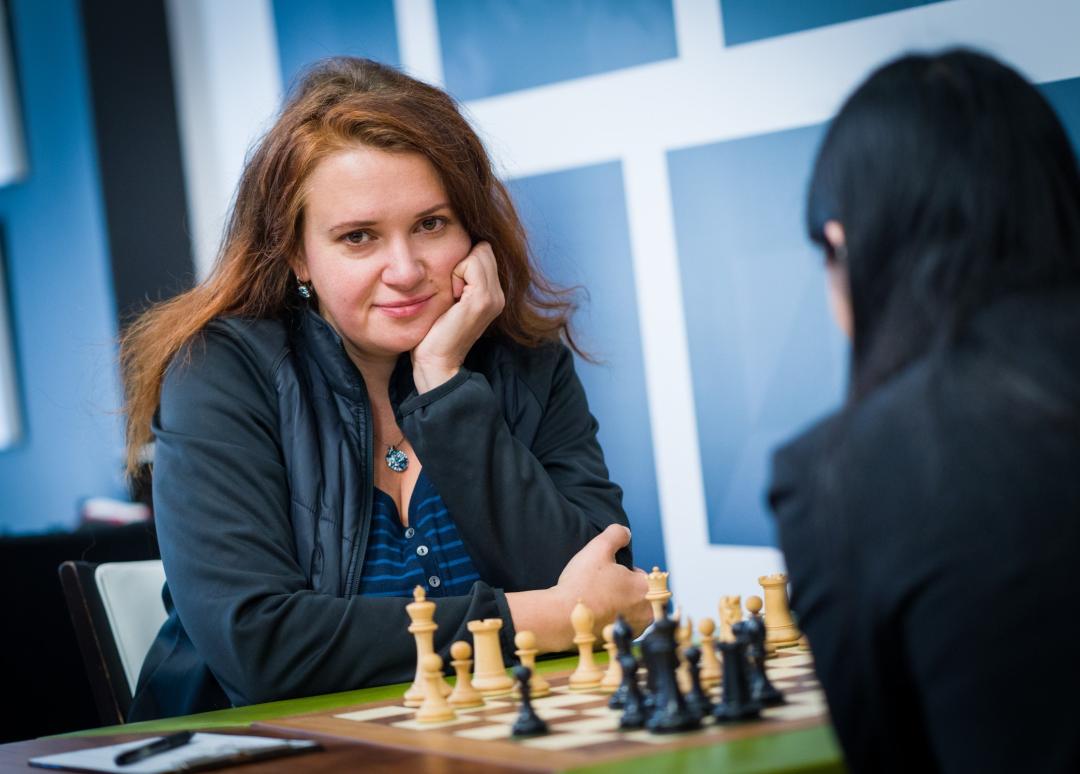 In the second round, Zatonskih came close to defeating GM Harika Dronavalli in an upset on the sixth board, before settling for a draw:

With hardly any time to recover, her next pairing was against former world champion GM Antoaneta Stefanova. In a roller coaster of a game, Zatonskih comes close to extinguishing Stefanova’s premature attack out of the opening before inviting an unnecessary complication. But both players miscalculate the resulting position, ending up in a materially imbalanced endgame that Zatonskih converted with relative ease: 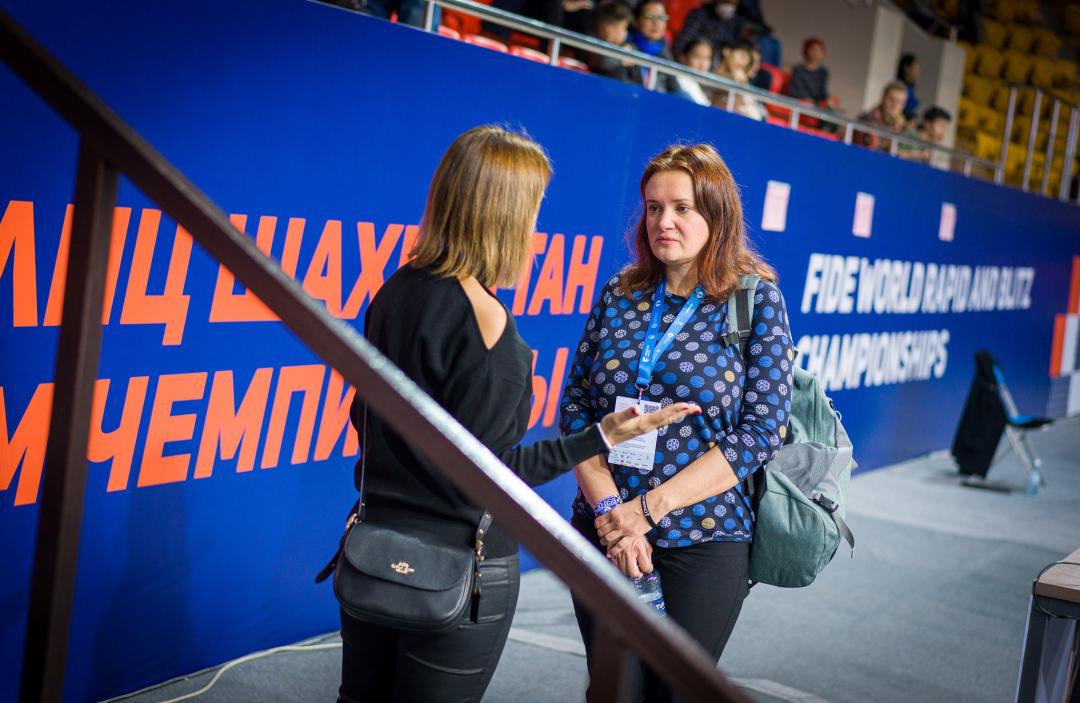 With 2½/3, her final round of the first day was certain to be a challenge. Indeed, her opponent was German GM Elisabeth Paehtz: the 40th and most recent woman to earn the grandmaster title. Nevertheless, it was Zatonskih playing the role of the aggressor, transforming a pleasant position into a pawn-up ending. Unfortunately, thanks to Paehtz’s technique, the extra pawn was neutralized and a draw was inevitable:

After an undefeated 3/4 performance on the first day, including a win and two draws against grandmasters, Zatonskih’s fortunes turned on the second day. Her 0/4 result did not do the quality of her play justice, as evidenced by the stubborn defense she exhibited against a calm, persistent attack by her fourth grandmaster opponent:

Another topic of conversation were two Iranian women choosing to compete, and be photographed, without a hijab.

Bravo to Sara Khadem and Atousa Pourkashiyan, two top-level Iranian female players, not wearing their hijabs at the World Rapid/Blitz Championships!! I have so much admiration for these 2 courageous ladies! @FIDE_chess @ECUonline @WOMChess #MahsaAmini Photos L. Ootes/FIDE pic.twitter.com/RsyCz5H3xQ

Several news outlets picked up on this story, but neglected to mention that WGM Atousa Pourkashiyan, had apparently switched federations to the United States back in November 2022. She has been living and teaching in Los Angeles, and now officially represents the USA. 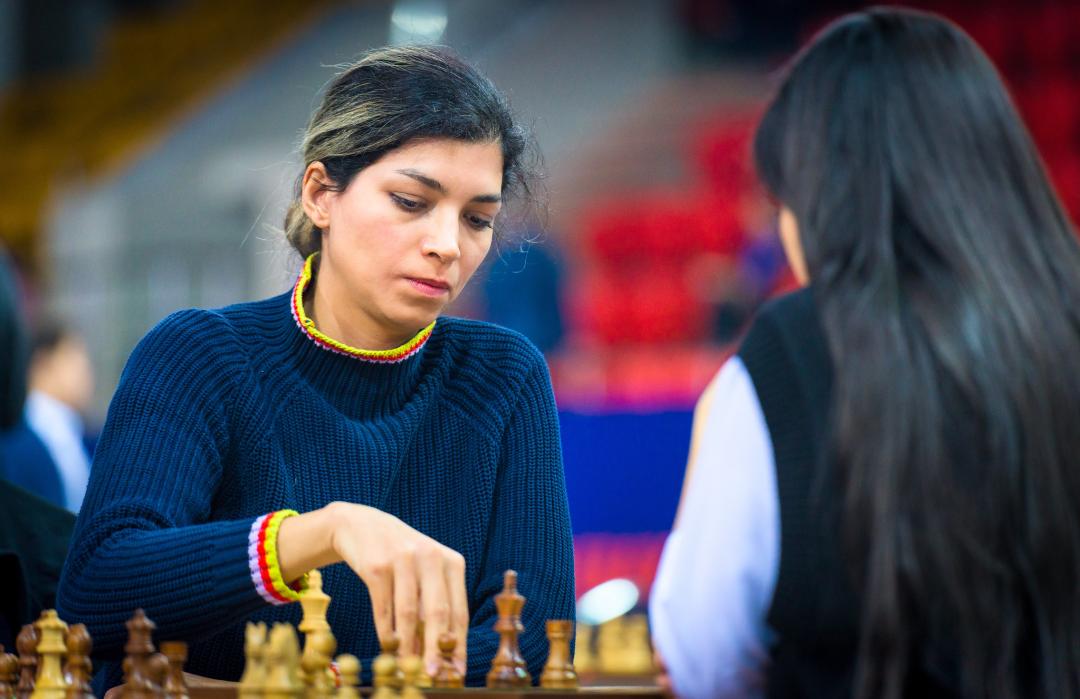 What better way to celebrate the switch of federations than a rapid game against her new nation’s Olympiad board one? On the white side of a lively (yes, really) Petrov, her opponent missed one opportunity to keep the pressure on and, from there, Pourkashiyan conducted her attack with grace.

Why not 82. Q-c2 in the Pourkashiyan-Tokhirjonova game, winning the white queen? Is there an error in the game score? Did black lose on time?

Great question! My best guess is that 81...Qc3+ was the last move played in the game. Either Black ran out of time before hitting the clock, or resigned after making her move. When games broadcast on DGT boards are completed, it is customary to mark the result of the game by putting the two kings on center squares. If both kings are on white squares (e4/d5) that marks a win for White, and the black squares e5/d4 a win for Black. So my guess is that White's king is on e4 as a way of marking the result, not making a move. A funny ambiguity, as typically the kings cannot reach these squares in one legal move.