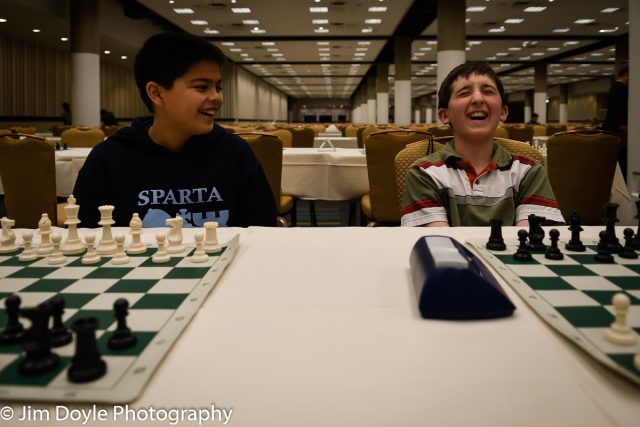 Photo Jim Doyle
Georgia weather told of good things to come- and come they did, as over 1,100 players descended upon the Hyatt Regency in Atlanta, Georgia this weekend. They were not here for the drug prevention nor propane conferences, but for a weekend full of socializing and competitive chess fun at the National Junior High (K-9) Championship. Although the tournament is commonly referred to as a middle school championship, the K-9 Championship attracts kids from 5 years old to 15 to its tournament hall. Large school chess teams and individual players alike train for months, hoping to win the top prizes at this event. For some, this tournament is an introduction to large, national events that attracts hundreds of players. This is one brilliant reason the tournament and many large tournaments have an unrated section. Even if it is not a first tournament, the national events can still serve as The children who are used to playing only in local chess clubs or at school can visualize how widespread competitive chess playing is by going to a Nationals. Abhirha Roy, who is playing in the K-9 Unrated section, is one such example. His family traveled all the way from Ohio because his father, Souvik, thought playing this Nationals would “be good for his interest in chess.” Souvik has high hopes for what this tournament will instill in his son, mentioning, “It is his first time seeing the national level environment and all the excitement. I hope it will get him to continue with chess.” Abhirha notably won his first rated game ever in around 15 minutes! https://twitter.com/USChess/status/982307416539910144 National tournaments are not only great introductory tournaments, but they also give young players a glimpse of chess culture with special events and guests. The US Chess Women’s Committee also has a Girls’ Club room filled with snacks, activities such as nail painting, and boards for players to play skittles in between rounds. NM Damir Studen is offering game analysis in boards outside the room and WIM Carolina Blanco is a guest who helped with game analysis and gave a simul on Friday. https://www.instagram.com/p/BhRmobbh4nZ/?taken-by=uschesswomen A full list of events is available for those at the tournament at the Women’s Committee table. Atlanta’s own grandmaster Ben Finegold played several kids in a simultaneous exhibition and is taking on all comers in blitz for several hours throughout the weekend. 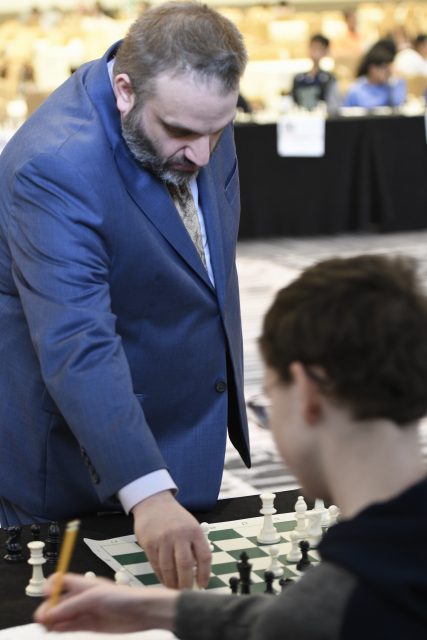 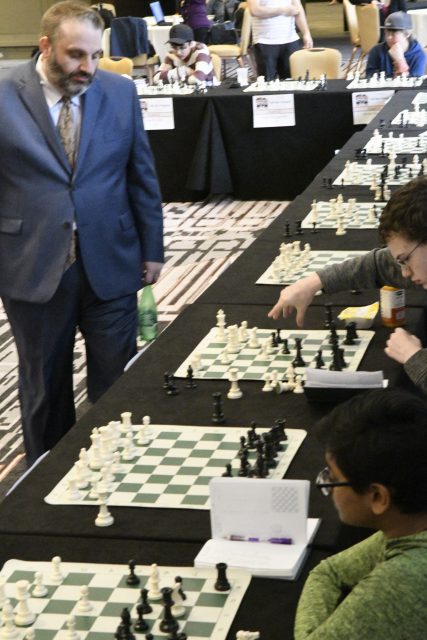 Also present at the tournament are US Chess Scholastic Council chair FM Robby Adamson and Executive Director of the USCF, Carol Meyer, who has been making plenty of tweets of her own about the tournament throughout the weekend. https://twitter.com/carolbmeyer/status/982373951237185538 https://twitter.com/carolbmeyer/status/982400636036710401 It is always great to see those in administrative chess positions actively involved in engaging in the chess community! She even gave the Girls’ Room a mention in her opening ceremony speech. Expect to see her face at many more tournaments, not just scholastic ones, as she was recently at the US Amateur Team East and Chess Day at the Dali Museum. Players to watch throughout this tournament include FM Maximillian Lu, who is playing in the K-9 Championship. While the top players around him are in the 9th grade, Max is only in 4th grade. His young age is not something to dismiss, though, as he was at one point the youngest national master in American chess history. He is the fourth seed of the tournament. 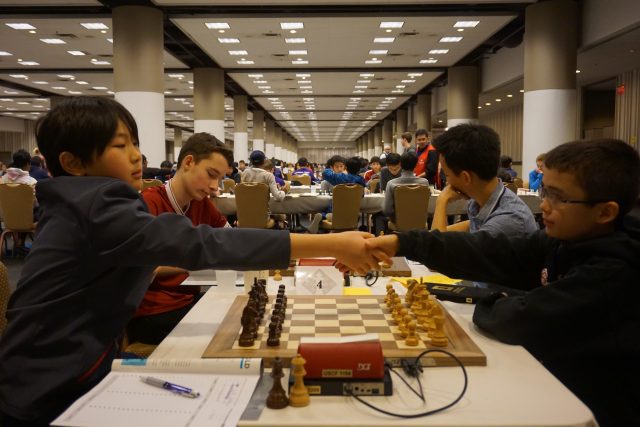 Max Lu at the start of round 2
Third seed Marcus Miyasaka from New York is the strongest of three siblings. He tied for third in the Grade Nationals tournament in December, so for this event, he’s looking to win it all. As a 9th grader, it is also his last chance to accomplish such a feat. FM Arthur Guo is a 6th grader from Georgia who is currently at his peak rating. With a strong performance in his latest tournaments, he is sure to bring his best to the board. He is the second seed of the tournament behind CM Christopher Shen. https://twitter.com/USChess/status/982460234106134528 CM Shen hails from Ohio and is rated just over 2350. In a startling controversy, it was initially thought that he had lost his Round 1 game against a player rated 800 points lower than he was! What a way that would be for the top seed to start the tournament- except it was a technical issue with the players started on the wrong board, and he had indeed won the game. This just goes to show that there are mistakes that could always happen and the phenomenal tournament staff rushes to fix the errors quickly. 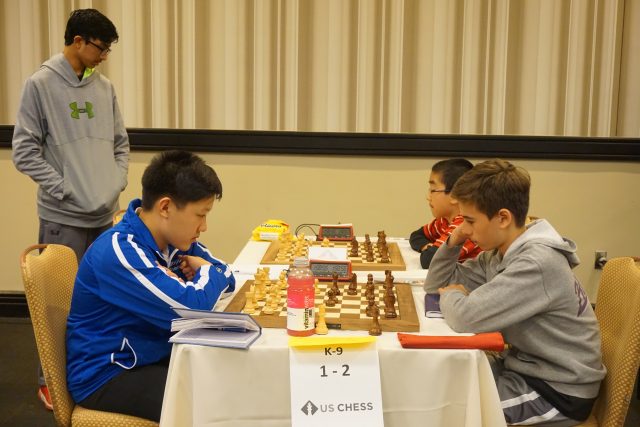 Christopher Shen at the Junior High School Championships
In the K-8 is National Girl Tournament of Champions winner NM Rochelle Wu, who is the second seed. She recently moved from Alabama to California, which will hopefully provide her with more opportunities to play chess. She is one of the more prominent females in the tournament and may stay that way for a while, as she is sitting on 3-0 at the time of writing. https://twitter.com/USChess/status/982639471773577216 The top seed of the section is NM Aydin Turgut. This impressive player is not only looking to win the K-8 Championship but has also already won the Blitz side event and the Bughouse event (along with partner Julian Daniels). He is much higher rated than the others in his section, but must still tread carefully over the next few games. You can follow the live broadcast of top games  and standings/pairings  online. Use the hashtag #JHSChessChamps to interact on twitter.
SHARE: