As I look back on my time in Saint Louis attending the 2019 U.S. Championships, there are moments and images that stick with me. One of them is the experience of watching the final moves of the Round 4 encounter between Sabina Foisor and Irina Krush. In that game, you may recall, Foisor struggled against both a ticking clock and a determined Krush to finally clinch a theoretically won Queen and Pawn versus Queen endgame. 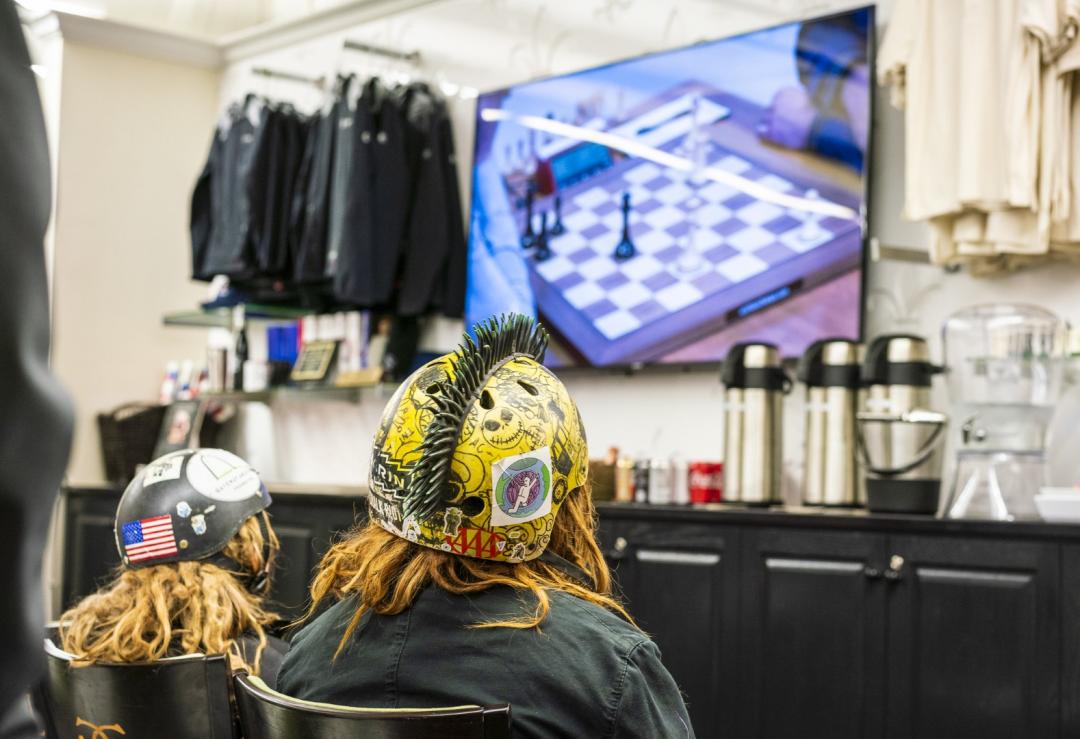 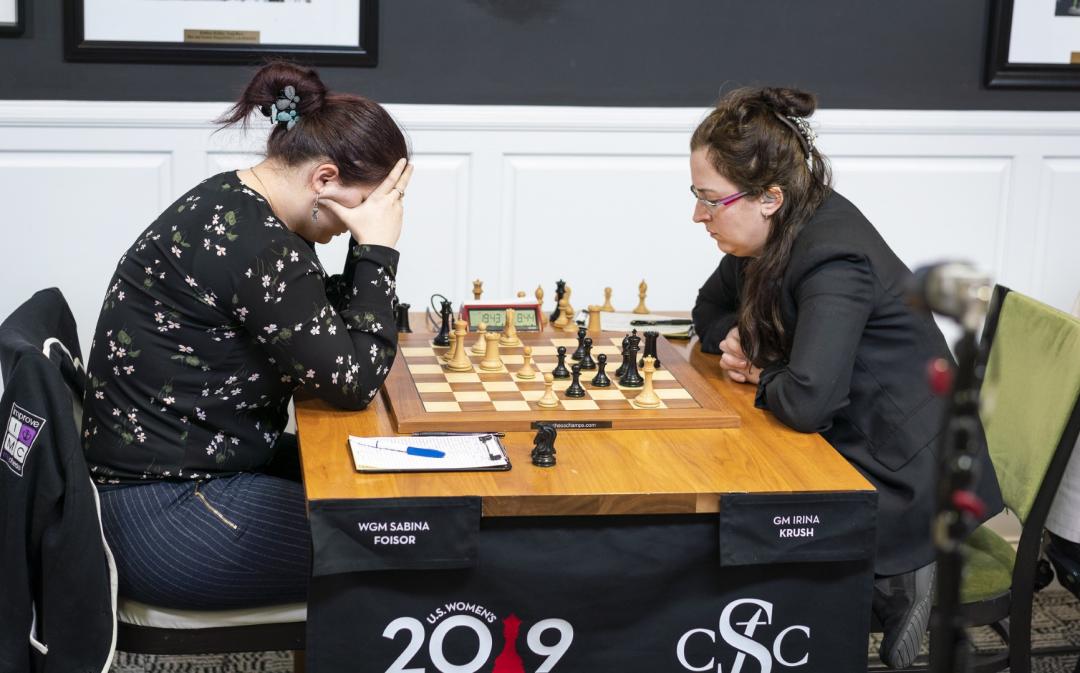 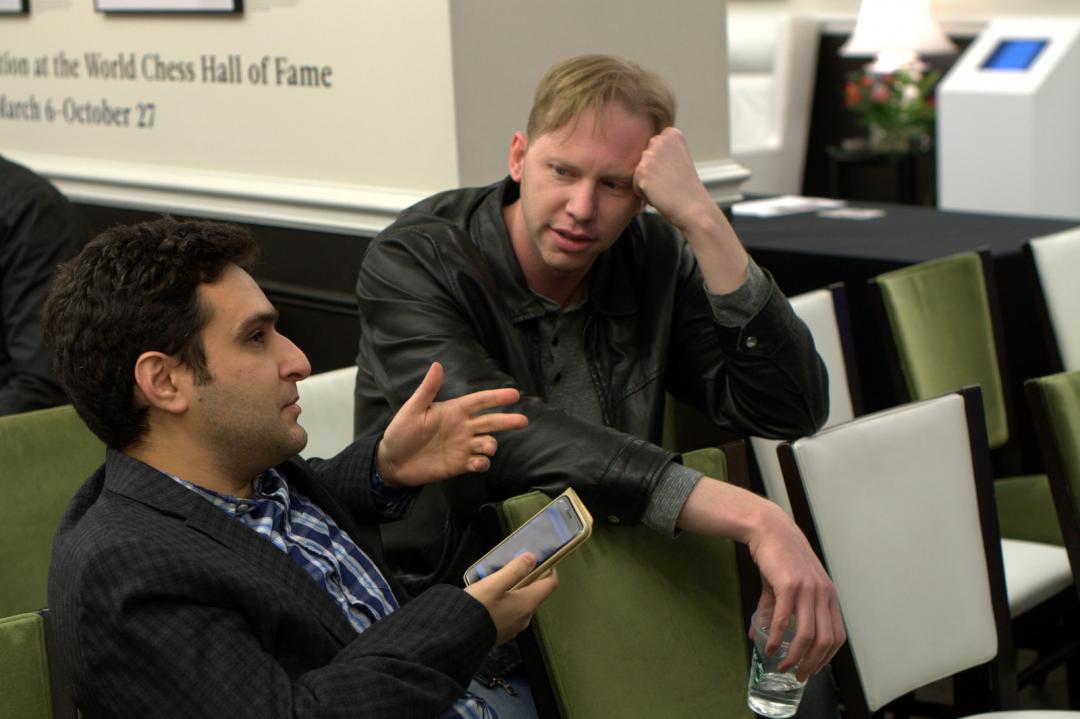 Moradiabadi talks to Bryan Smith about the position 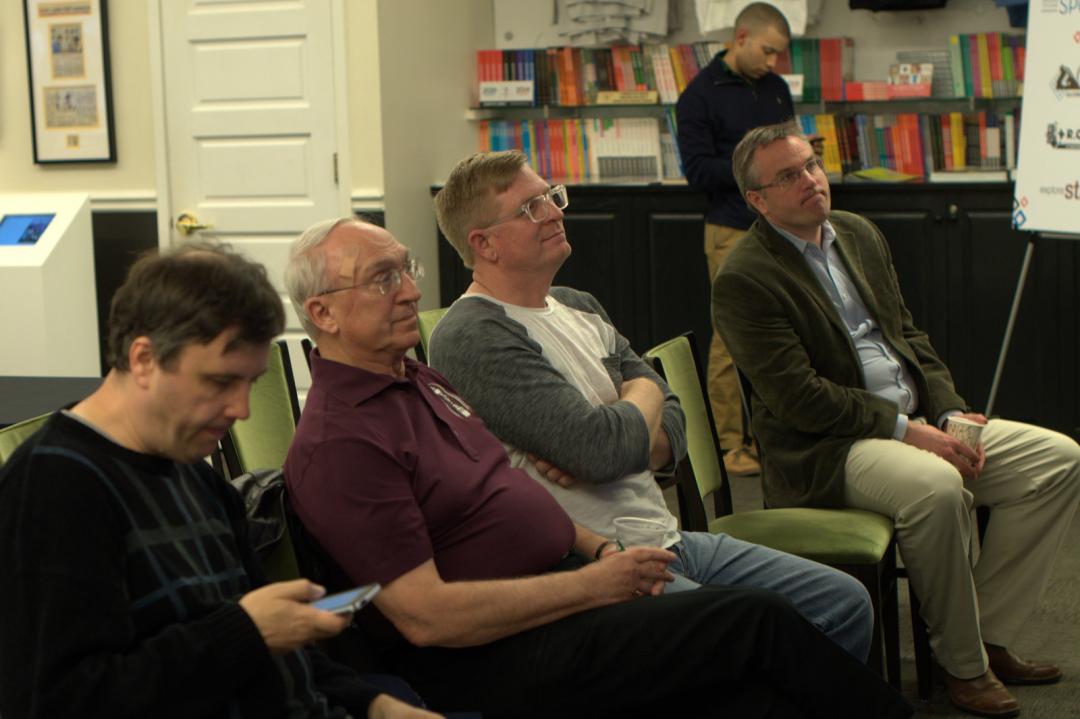 Sinquefield and friends study the positions 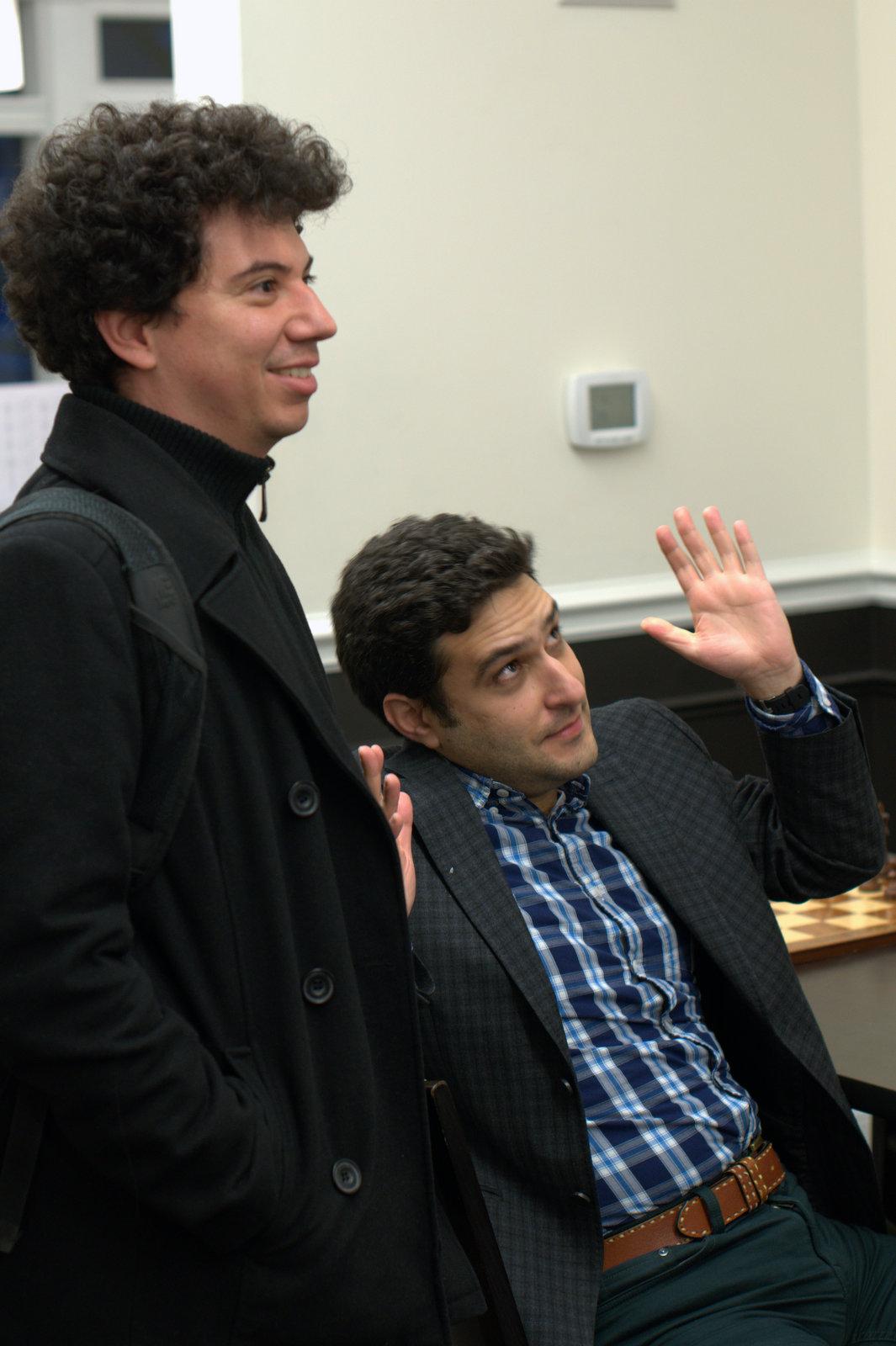 Ramirez and a happy Moradiabadi 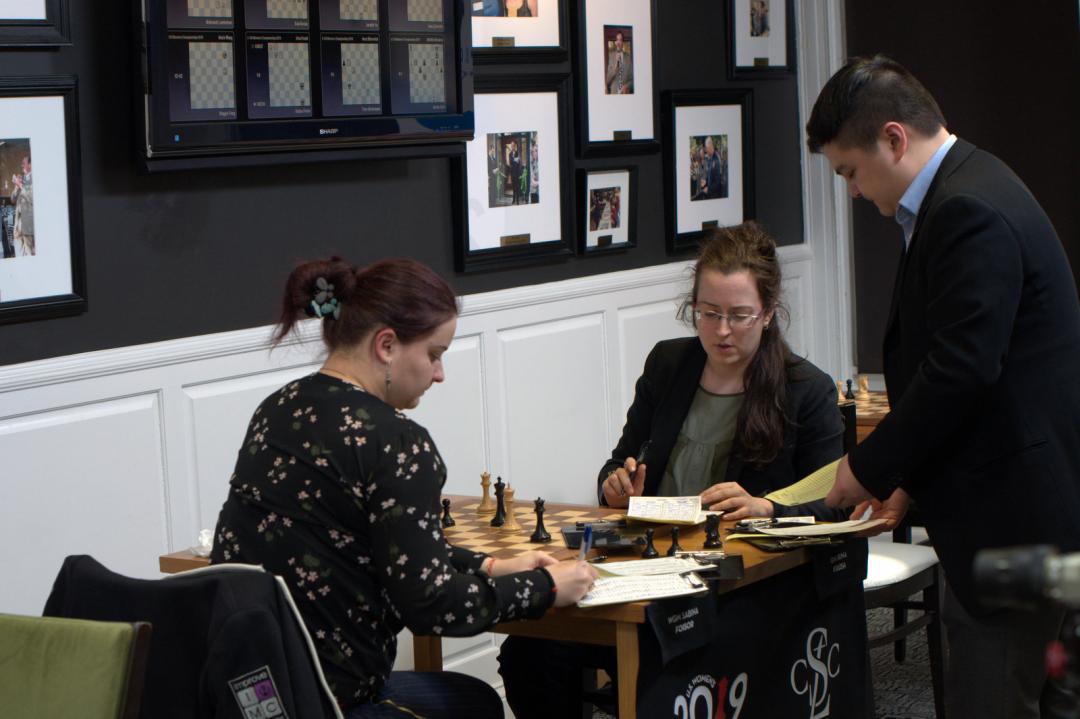 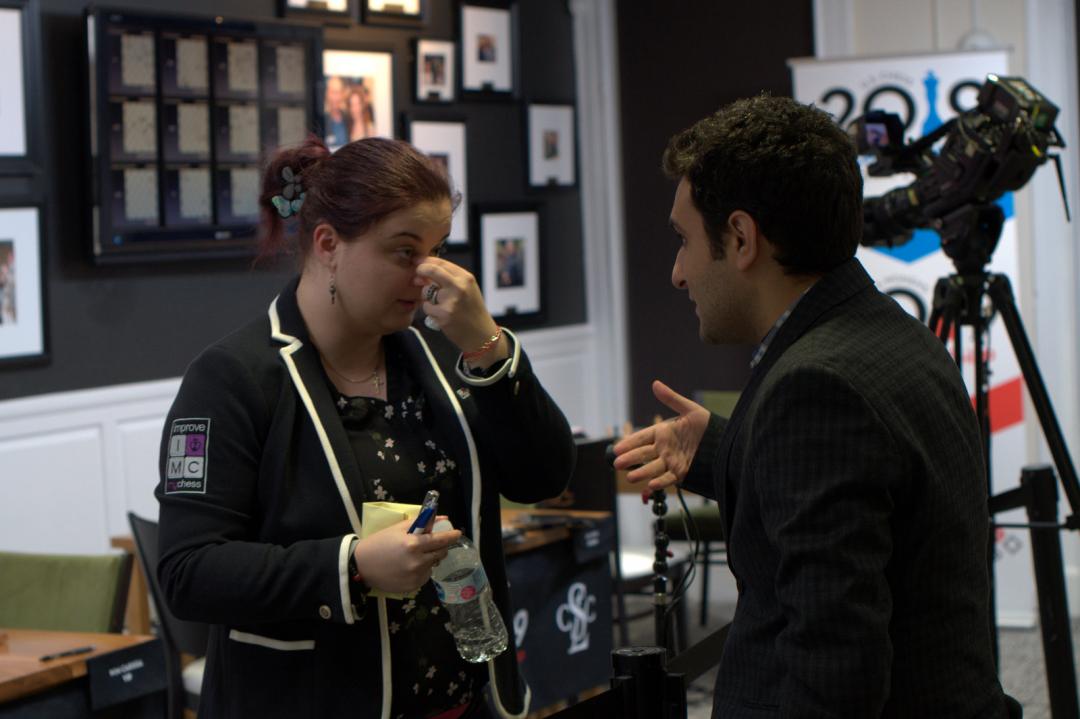 "But did you consider this?!" 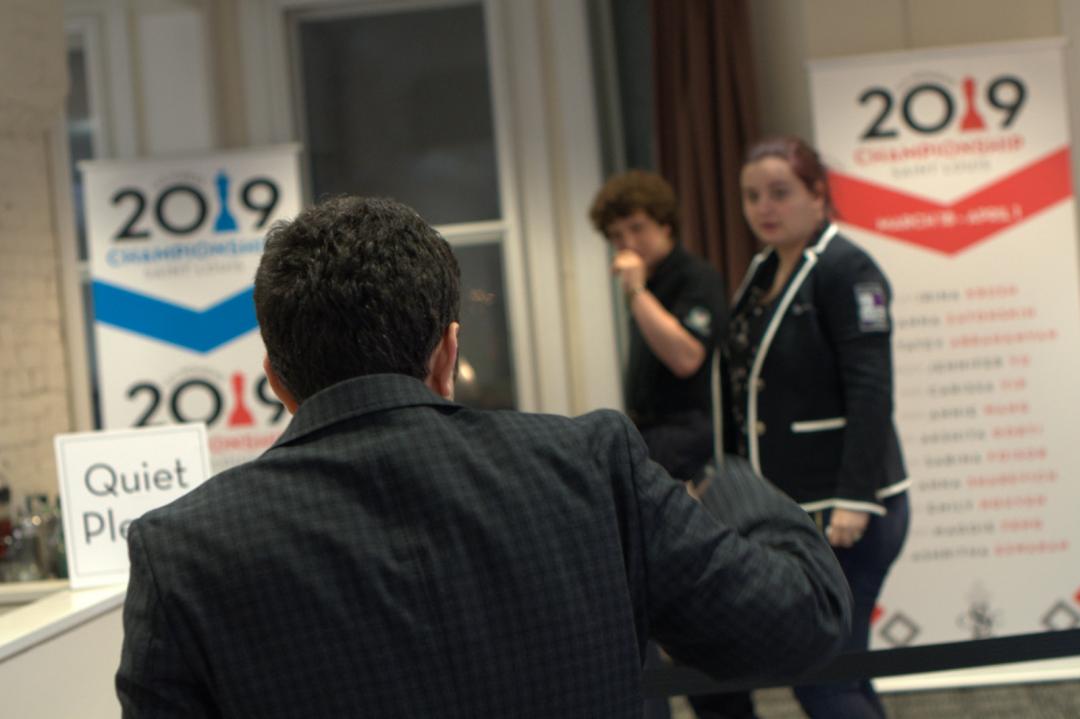 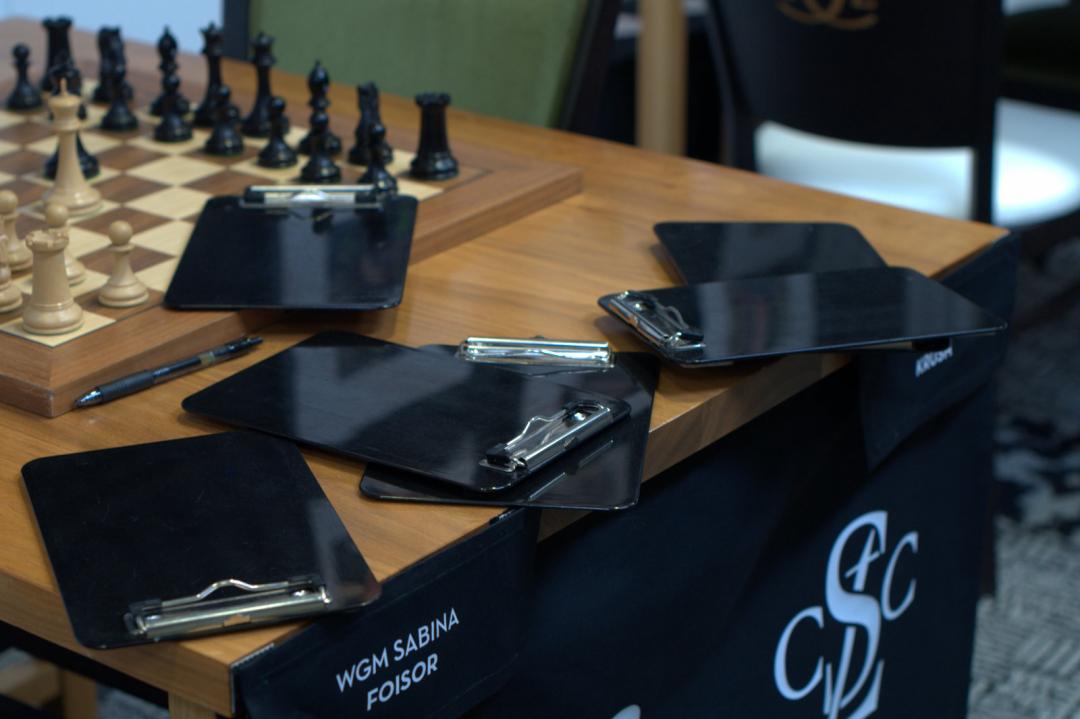 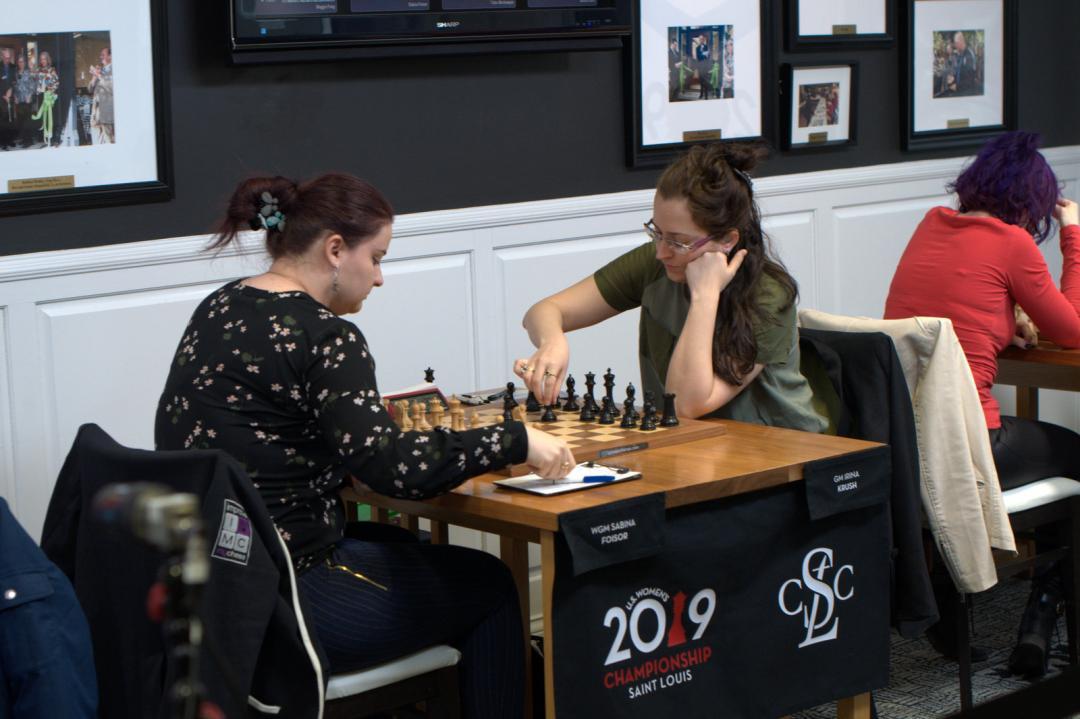 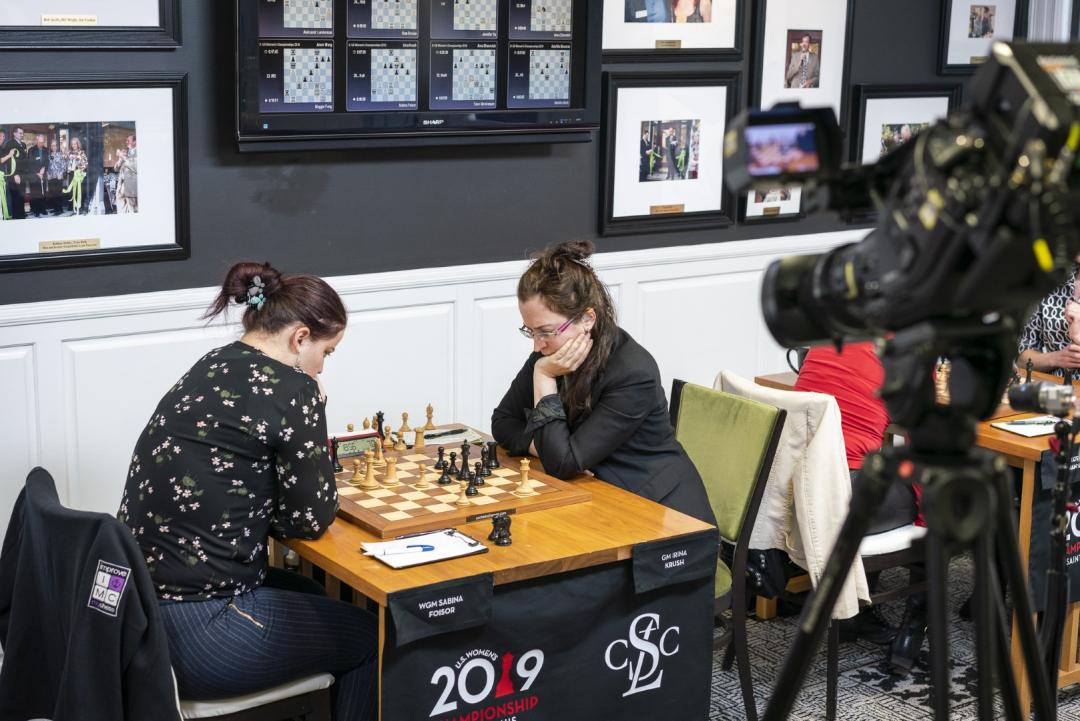 Foisor-Krush (photo Ootes)
Part of what made this game so memorable was seeing it ‘live’ at the Saint Louis Chess Club. The assembled players and fans, including Foisor’s fiance, Elshan Moradiabadi, were rapt as the announcing team of Yasser Seirawan, Jennifer Shahade, and Maurice Ashley worked through the immense thickets of checks and counter-checks, showing viewers how Foisor could win and how Krush might (if Foisor stumbled) eke out the draw. After Foisor played her 146th move and Krush resigned, there was a cheer downstairs and a sense of palpable relief. It was nothing against Krush, of course, a legendary and beloved figure in American chess; rather, I think it was simply that the tension of the situation was broken, that the back-and-forth had ended, and that our attention could leave those taut positions and return to more mundane concerns. While watching Jen, Yaz, and Maurice do their work, I realized that, were I in Krush’s shoes, I would have no idea as to how to best defend. Queen and Pawn vs. Queen endings are notoriously tricky, with complex lines of checks and counter-checks to consider. I knew from reading Dvoretsky that one game – Botvinnik-Minev, from the 1954 Olympiad – was considered paradigmatic, but what did that game really teach us, and how did it bear on what was unfolding in front of me? This week’s Workout revolves around those questions. Can you play like Sabina Foisor and win her ending against Irina Krush? Can you win it faster than she did? In what follows, I’ll give you the position, followed by the generally accepted theory and a few examples. Then it’s up to you. Play it out against a friend or against the computer – I suggest you use the Tarrasch Chess GUI (a free download) for this purpose if you don’t have commercial software handy – and see how you do. The Key Position: Foisor-Krush, after Black’s 58th move. The FEN (to paste into your playing program): 1Q6/8/8/q7/8/4k3/1KP5/8 w - - 0 59 Theory: Queen and Pawn vs. Queen endings are drawn unless (a) attacking side has a bishop or central pawn and (b) the pawn is on the 7th rank and supported by the king. If the defender can get in front of the pawn, the ending should be drawn regardless of which type of pawn it is. Otherwise, the defender should place the king as far from the pawn as possible, in a corner opposite from the queening square. Defensive ideas include checking to try and win the pawn, or when checks run out, pinning the pawn to the king or queen so that it cannot move forward. The attacker should strive to put her king on the same (or adjacent) line as the defending king to maximize the chances of a counter-check or cross-check, a tactic used to escape endless checks by the defender and trade queens. The queen should also try to stay centralized. Bishop pawns (c/f) give the best winning chances, followed by central pawns (d/e). Knight pawns (b/g) give decent drawing chances, while rook pawns (a/h) are theoretical draws. In all cases the defense is very difficult, practically speaking, so player with the pawn should play for the win, even if the position is ‘theoretically’ drawn. Most effective defensive zones: Rook pawns (a and h): King in front or in opposite corner. Knight pawns (b and g): King in front or in opposite corner. Bishop pawns (c and f): Only the king in front of the pawn gives drawing chances. Central pawns (d and e): King in front or, per Nunn, the short-side ‘queening’ corner. This would be h8 if the attacker has an e-pawn, for instance. Examples: Botvinnik-Minev was critical for the development of the theory of this endgame. Another example of a win for the attacking side, this time with the c-pawn (as in Foisor-Krush). This ending with the rook pawn is theoretically drawn. Here’s what that might look like in practice. The knight’s pawn is theoretically winning, but draws are not uncommon. Karsten Müller uses an excellent version of this ending in Chess Endgames For Kids to illustrate how the draw can be held. Armed with this knowledge, and hopefully having tried to win the ending on your own, compare your results with the game continuation in Foisor-Krush. References: Averbakh, Yuri. Comprehensive Chess Endings: Volume 3, Queen and Pawn Endings, Queen Against Rook Endings, Queen Against Minor Piece Endings. Oxford: Pergamon Press, 1986. 29-70. Botvinnik, Mikhail. Botvinnik on the Endgame. Coraopolis, Penn: Chess Enterprises, 1985. 37-39. Dvoretsky, Mark. Dvoretsky’s Endgame Manual. 4th edition. Milford: Russell Enterprises, 2015. 266-268. Fine, Reuben, and Pal Benko. Basic Chess Endings. Revised edition. New York: Random House, 2004. 526-530. Mednis, Edmar. Questions and Answers on Practical Endgame Play. Coraopolis: Chess Enterprises, 1987. 126-128 Müller, Karsten. Chess Endgames for Kids: Featuring 50 Endgame Lessons. London: Gambit, 2015. 102-105. Müller, Karsten, and Frank Lamprecht. Fundamental Chess Endings. London: Gambit, 2001. 316-320. Nunn, John. Nunn’s Chess Endings. Volume 1. London: Gambit, 2010.
SHARE:

[…] The wins kept piling up for the Arch Bishops in the third round, and they increased their lead with a 2.5-1.5 round victory. Donchenko held Caruana and Meier drew Bok, but the combination of Theodorou’s win over Agrest and Proleiko’s rollercoaster draw against Kollars gave the round to Saint Louis. Perhaps Julian should have studied the Foisor-Krush ending? […]