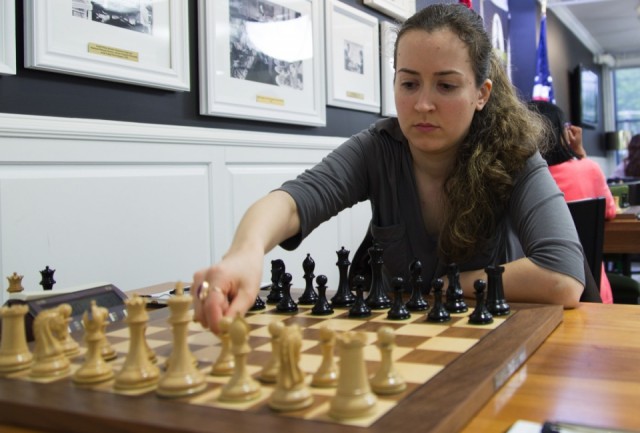 GM Irina Krush at the Saint Louis Chess Club
This year New York State inaugurates another state chess championship-- the first New York State Girls Chess Championship! This event is open to all girls under age 20 who like to play chess (out-of-state players are welcome). The tournament is rated by the United States Chess Federation, and all players will receive a national chess rating (USCF membership is required of all players; players may join USCF when they register for the tournament). The tournament will be played at the Hewitt School, located at 45 West 75th Street (between Park and Madison) in Manhattan, this weekend: February 25-26, 2017. The K-12 Championship, K-6 Championship and K-3 Championship Sections play both Saturday and Sunday. The K-1 Championship, K-12 Under 1200, K--6 Under 900 and K-3 Under 600 play on Sunday only. The games all begin at 10:00 am on the respective dates. The New York State Girls Championship should be an exciting contest: already the list of entries includes Vicki Yang, Sophie Morris-Suzuki, Nancy Wang and Ella Papanek: the Number Two, Three, Six and Eight top-rated girls, respectively, in New York State. International Grandmaster Irina Krush, former U.S. Women's Chess Champion, will also be on hand Sunday afternoon to offer advice to the girls and help analyze the players' games as well. The First New York State Girls Championship is US Chess' largest all-girls tournament in the country, with the exception of the US Chess National All-Girls Championships, which has been held for the past several years in Chicago. Participants compete both for individual prizes and school team prizes (a school's three top-scoring players produce the team score). Players without school teams compete just for individual prizes. New York State, which has the longest-running tournament in the country, the New York State Championship, and the longest-running state scholastic championships, the New York State Scholastics, as well as the country's longest-running rated scholastic tournament, the Greater New York Scholastics, now invites you to join us as we begin another proud legacy of New York State Chess Champions! For more information, see the tournament website at: www.chessgirls.win Contact: Sophia Rohde or Steve Immitt, organizers, at director@chessgirls.win if you have questions.
SHARE:

[…] — Eight-year-old Aliya Saldanha-Suri was convinced she’d lose her first match at the first-ever New York State Girls Chess Championship this past […]
(Please forward to Irina Krush) Glad to see that you are spporting the NYS Girls Championship. As a former pres. of NYS Chess Assn (in the '70s) when we inaugurated a NYS Scholastic Championship, I'm very much in favor of supporting youth involvement in chess. And, I recall, when I first got a computer in 1999, your leadership in the team match against the World Champion. That was an exciting experience for a Class A player.