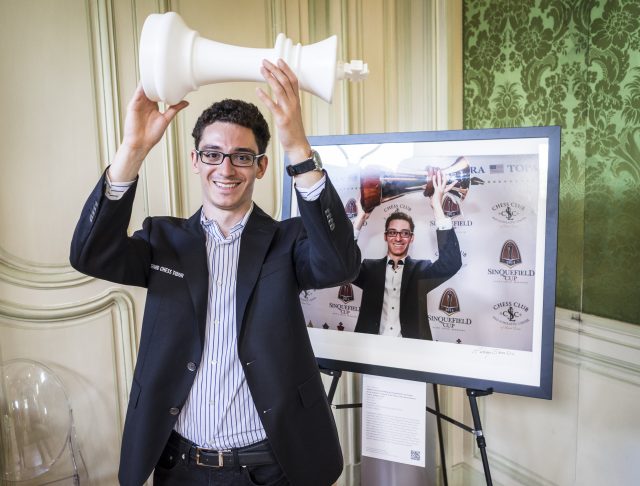 Fabiano Caruana is one of America's greatest hopes for a World Champion. He earned the right to challenge Magnus Carlsen by winning the 2018 Candidates' Tournament. He holds the record for the 3rd highest FIDE rating in history of 2844. He's achieved one of the strongest tournament performances ever at the 2014 Sinquefield Cup by going 7-0 against a field with a 2802 average rating. His performance rating for the event was a stunning 3080. Caruana has competed for both the United States and Italy, playing for the U.S. as a young prodigy, moving to Italy in 2005, and returning to the U.S. in 2015. He earned the grandmaster title at age 14, the youngest of both the U.S. and Italy at the time. Caruana won the U.S. Championship in 2016. Later that year, Caruana competed for the gold medal-winning U.S. team at the 42nd Olympiad and won the bronze medal for first board. Caruana has a universal playing style bolstered by his precise opening preparation and positional clarity. Here is Caruana's victory over Magnus Carlsen at his legendary 2014 Sinquefield Cup performance.
SHARE: