The Youngest at the Largest: The K-1 at SuperNationals VI 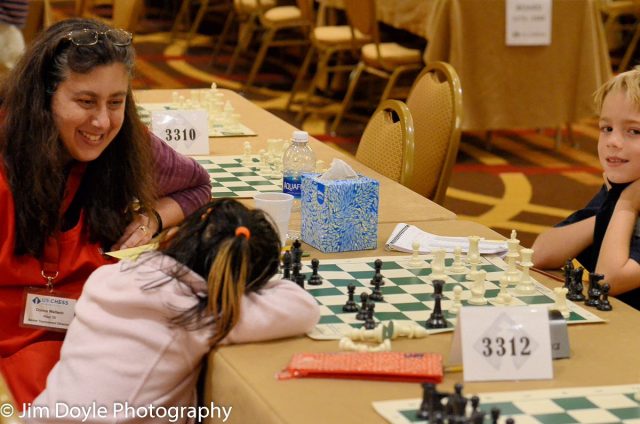 The Kindergarten through first grade section of SuperNationals VI featured some of the best stories of the largest rated chess event in history, held from May 12-14 in Nashville, TN. Betsy Zacate-Dynako, the Chief TD of the K-1 told US Chess about her experiences with the youngest of contenders. Chess coach Leteef Street also shares his experiences in the storied section. This report is illustrated with photos from Jim Doyle, whose work from SuperNationalsVI will also be featured in Chess Life Magazine, including the August 2017 cover story.  A Room Like No Other
The Nationals Kindergarten and first grade room is like no other chess arena. The K-1 room is set apart from the rest of the chess tournament, at the end of a hall and close to restroom. It houses the youngest players, sometimes as young as 4 1/2, and has frequently been my home over the last decade. Directing in the K-1 room is a job assignment that scares many adults, because dealing with just one five year old sounds exhausting, and it is. Being a tournament director in this room is a unique experience. 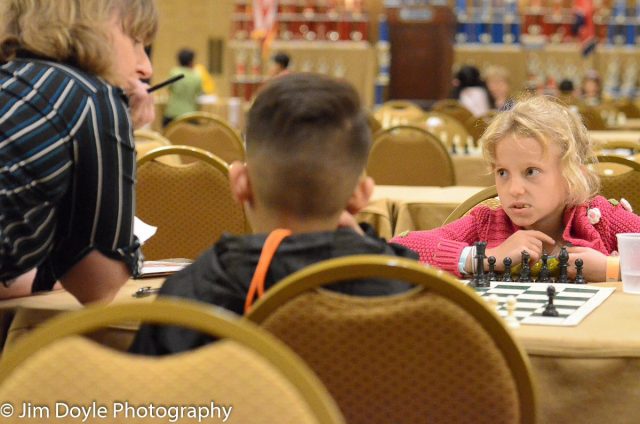 At Supernationals VI, I was stopped by a mother who was pushing her daughter, a K-1 room player, in a stroller. She apologized for interrupting me. I told her it was fine and asked her how I could help her. "I am concerned about the result of the last game my daughter played, I want to make sure it was recorded correctly." My mind whirled around all of the reasons a result could be recorded incorrectly: player didn't sign the score sheet, player felt bullied into taking a draw, player left without calling a tournament director over, player doesn't remember the result of the game, etc.
"Why are you concerned that the result may not have been recorded correctly?" I asked the mother.
She replied, "when my daughter came out I asked her what her result was and she said she drew. Then she told me she had checkmate."
Before returning to the playing hall to look up the result, I leaned before the stroller and introduced myself to the young player with "hello." I was greeted with happy excited hello in return from a pair of big brown eyes and a matching mop of curls. I knew this face, I thought, she is a sweetheart. "I am hoping you can help," I began. She nodded her head yes. "I want to make sure I have the result of your last game correct. Will you tell me what the result of your last game was?"
She happily chirped through a smile, "I drew."
"Oh," I paused, "then I am confused because your mother told me you told her that you drew, but then you said you had checkmate."
With the same chirper voice she exclaimed, "I lied."
That explained the mystery. I have seen it before, even with older children. They report they lost and see their parent(s) look disappointed, so they say they won instead. I followed up, "am I understanding correctly then that you told me the truth when you said you drew?" She nodded yes. “Did you circle a draw on your result slip and tell a tournament director that the game was a draw?" Affirmative. "Then when you told your mom that you had a check mate that was a lie?" This time, in a sorrowful voice she replied, "Yes, it was wrong."
"I am glad you know that was wrong. I am also glad you told me and the other tournament director the truth. I will see you for your next round."
Mother's Day at SuperNationals 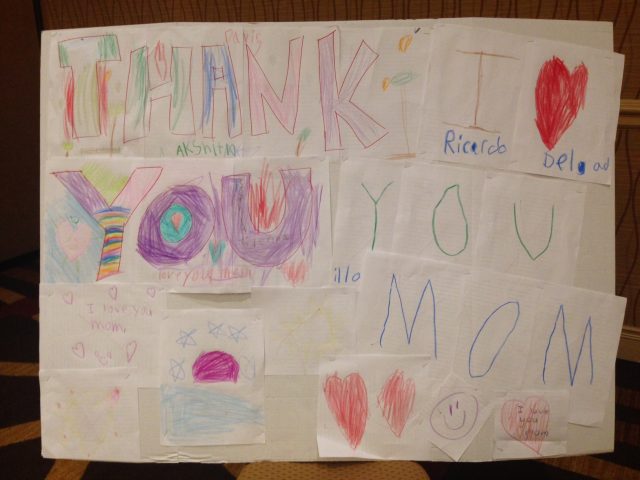 When I worked my first Elementary National tournament that fell on Mother's Day weekend I called my mother from the playing site to share my love. She didn’t like that I was far from home. We agreed that wasn't ideal but we would celebrate the day I returned home. With the tournament going on it was easy to lose sight of the day. Usually dad or another adult helps a young child with Mother's Day plans so I gave a hand to the K-1 kids.
That year during the rounds on Saturday I provided a big Happy Mother's Day sign that I whipped up with printer paper I stole from the back room, a sharpie, and tape. Since I did not have crayons to gave the children to color with I gave what I could find pens and highlighters. Even with limited art supplies the K-1 kids made a lovely sign. It was well received and now it is something I provide yearly when I am the K-1 Chief.

Now I travel with supplies. My second in command this year at the K-1, Donna, is a mother of two boys. She brought a big bag of old crayons. The endless crayons and almost 400 competitors provided all the inspiration needed. We ended up with the grandest signs yet: three full pairing boards filled with love for mom. Great work kids!
A Hearty Welcome to Working Nationals 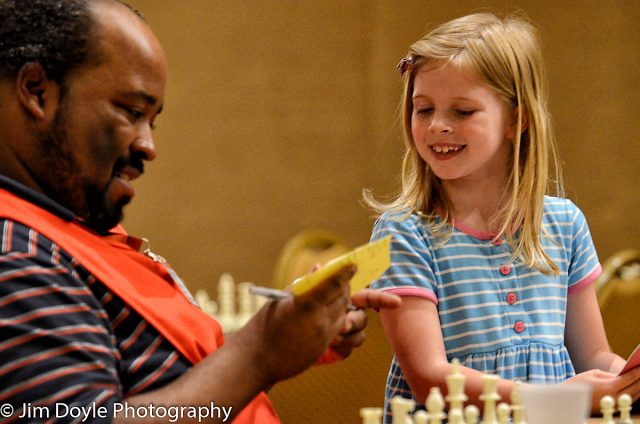 Leteef Street helping a player at SuperNationalsVI
In contrast to Betsy, Leteef Street worked his first National Scholastic Championship at SuperNationals VI. But he has a long pedigree in the world of chess coaching. After over a decade of work building the Philadelphia scholastic chess scene, Leteef just accepted a job at the Success Academy Charter Schools, and will move to New York City in the fall. 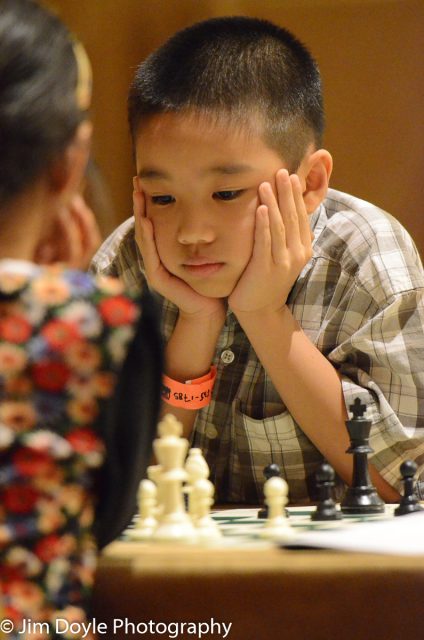 Leteef agreed with Betsy that the K-1 was where his heart was at SuperNationalsVI: It was intense working for a long time with children so young in a competitive chess atmosphere. Tears, tempers, inappropriate conduct, not being able to fill out the result sheets and not knowing the rules, were just a few of the issues that arose. However, I would not have preferred to work any other division. There is never a dull moment with the babies... They are hilarious and their families are very appreciative that you helped make the experience positive for their child and help them to be more excited about playing chess. 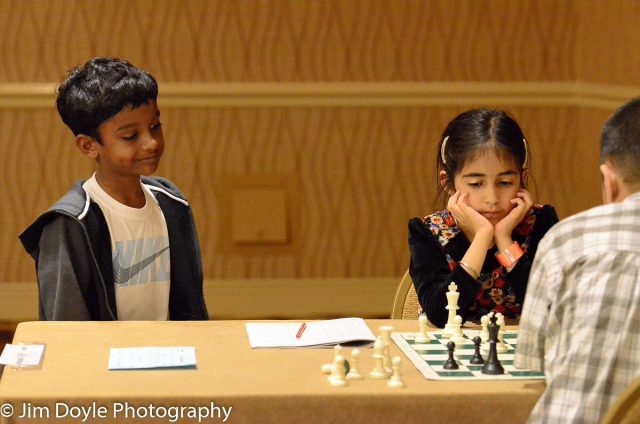 Leteef's favorite moments included: There was a touch move dispute between two little girls and when I asked the girl who touched the piece about it she said she was fixing the piece. I asked her if she said "adjust" and her response was "I said adjust in my head."
Leteef also relayed a conversation he had with another young competitor: Me: Can I help you? Boy: I don't want to play anymore. Me:Why not? Boy: My socks stink. I can't play like this. Me: (Stunned silence for a moment, laughing out loud in my head....) The boy decided to play on when his opponent insisted she wanted to finish the game. He won despite the distraction of stinky socks. 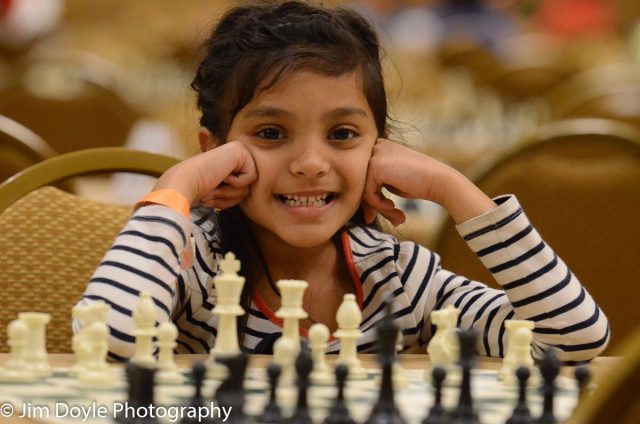 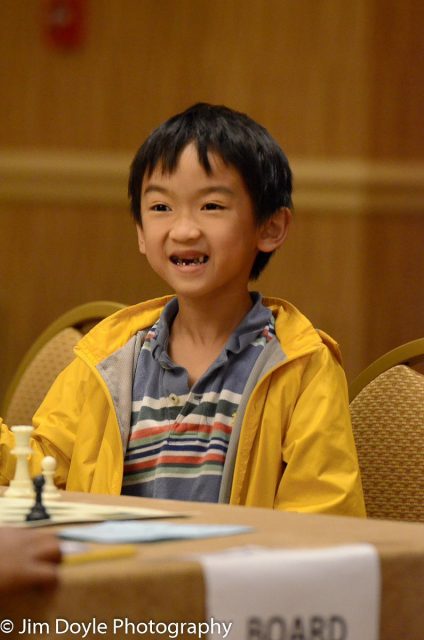 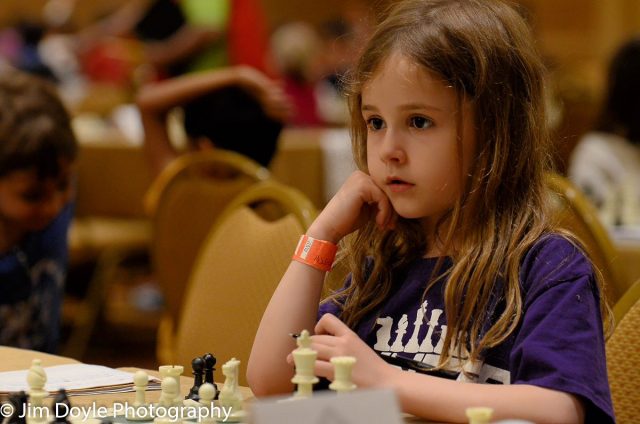 As we celebrate champions in all the sections (including our K-1 Champs pictured below), don't forget about the hundreds of youngest newcomers to our Scholastic chess scene, who elicit some of the best bursts of laughter and joy. https://twitter.com/USChess/status/863915957596672001 Browse full results on the K-1 Champs here, and see our SuperNationals VI wrap-up here. Find Betsy Dynako's bonus material, VI Ways You Know You're at the K-1 at SuperNationals VI, later this week on our facebook page at US Chess.
SHARE:

I am soooo proud of my son, Leteef, for being so patient and kind to the youngest chess players! He has loved chess just about all his life and now he is helping others to enjoy this wonderful game! He will be quite an assess to the children at Sucess Academy in Queens, New York!
Sorry...I meant to type Success Academy.
[…] The Youngest at the Largest: The K-1 at SuperNationals VI  by Betsy Dynako […]