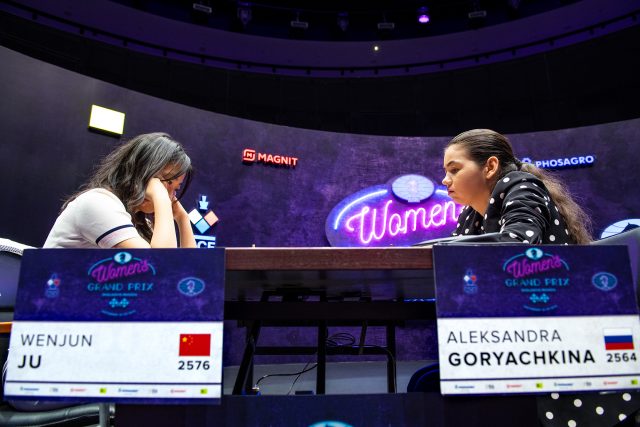 Wenjun Ju vs. Aleksandra Goryachkina in the Women's Grand Prix

The World Women's Championship (January 4-26)  officially begins on January 5th in Shanghai, China as reigning champion, 28-year-old Grandmaster Wenjun Ju faces 21-year-old Grandmaster Aleksandra Goryachkina from Russia. The 12-game match is a departure from the most recent World Championship, a 64-player knockout held in Khanty-Mansiysk, Russia. The 2020 prize fund is 500,000 Euros, and the winner will receive 300,000 Euros (or 275,000 if the match result is determined in playoff). The competitors come in at #2 and #4 in the World on the January 2020 rating list, and both are closing in on 2600. This is a massive boost for women in chess, as the great disparity in the women's World Championship prize fund in 2018 was highlighted in Sports Illustrated.  The match will move to Vladivostok, Russia on January 13th and resume on January 16th for round 7. Who's your pick to win?