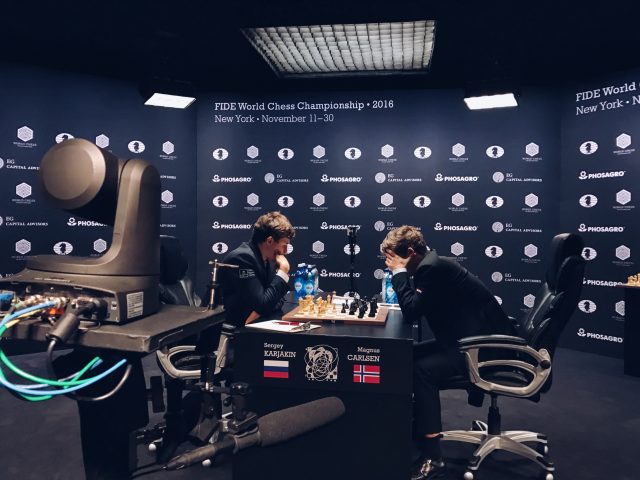 After a dramatic round 10 in Carlsen-Karjakin, players and the fans were given a well deserved free day to contemplate and assimilate the consequences of an incredible turn of events. The champion regained his mojo, while the challenger let a huge chance slip that may haunt him for a long time.  Despite that, both men had to return to the table on Saturday, and Karjakin got his last white in the match.

In the penultimate game, Karjakin came to the round well prepared and quickly blitzed his first 15 moves in an unusual anti Ruy Lopez with a3 & Nc3-d5. Carlsen did not go for the main line with 9…Bg4 but instead opted for the less common 9…Be6, a move that is considered to allow white a certain edge. Three pairs of light pieces were quickly chopped off the board and the players reached a position in which both side were trying to grab space through an advancement of their pawns on the sides they had superiority. White was going for space on the kingside, while black was quickly preparing his response on the queenside. Despite the pawn marches and the apparent aggressive character of the position, both players were aware of the fact that the game is very close to complete simplifications, and one of them will have to engage those exchanges to avoid trouble. Carlsen found a very precise sequence of moves immediately after the theory ended and forced Karjakin to take a defensive stance and start pulling the breaks. Both players are well aware of the stake that is in play, and with only a 2 round mini match left, none of them looked to commit unnecessary mistakes. Karjakin had to dodge a few traps along the way but ultimately the players shook hands after only three hours of play. Throughout the press conference the champion seemed to be the more relaxed player, while the challenger seemed rather concerned that he still has to fight to equalized one game as black before going into tiebreaks. One moment that stroke a chord was when both players were asked how they would characterize the final games in terms of how much do nerves count, and how much do actual chess moves count. While Karjakin stressed the importance of nerves at this stage in the match and allocated 80% to it and only 20% to the actual level of play, Carlsen clearly stated that he only believes in chess moves, and that nerves will not be as important. The skills pay the bills as one could say! The whole conversation throughout the post game conference depicted quite clearly the roles of each of the contestants: Magnus Carlsen, the relaxed and confident champion vs Sergey Karjakin, the reserved and more tense challenger. Arguably, tiebreaks  is the most likely outcome, upon a draw in round 12. But first the players have the chance to win the title on Monday. I believe at this moment in the match Carlsen possesses a clear psychological advantage. My prediction for the rest of the match is as follows: Carlsen pressures in game 12 but fails to break Karjakin, followed by a dominant performance in the tiebreaks to keep his title. But don’t count out Karjakin, he has proved in numerous critical situations that he is the deserved challenger and he will do everything in his power to dethrone the reigning king. Follow along tomorrow at 2 PM EST on worldchess.com and find many more viewing options in GM Rogers' Couch Potato guide.
SHARE: