The 2018 Amateur Team North broke another attendance record. 84 teams with 364 players came out for the National Event, held from February 16-18 in Schaumburg, Illinois.  Chess Weekend organizer Glenn Panner said, “It is great to see chess growing like this.”
The tournament has been growing for the past four years. Panner is working with the hotel to find more space for the event, since some teams had to play in another room. Of course, having more teams not only means the need for more space, but it also means it's harder to determine a clear winner. If worse comes to worse, Panner said he is “considering making the top tiebreak method a dance-off.”
The levity of his comment shows off the good nature of Panner and his co-organizer Maret Thorpe. Thorpe is a recently minted National Tournament Director (NTD), one of just 90. Notably, Thorpe is also just one of six females with this title. The small but growing sisterhood is made up of Susan Breeding, Carol Jarecki, Sophie Rhode, Maret Thorpe, Tracey Vibbert and this writer (Betsy Zacate).
When congratulated, Thorpe said, “It is important to me to be an NTD because girls and other women it see they can be leaders in chess.”  Panner added, “It is harder for women to move up in chess as a player or official, because men have the tendency not to shut up and listen when they need to. We need to do better at creating opportunities.”
Over the boards and off, players were at the tournament to win. Beyond top winning team and individual awards, they competed for prizes such as best team name and costume. Nine college teams came this year representing four different states. 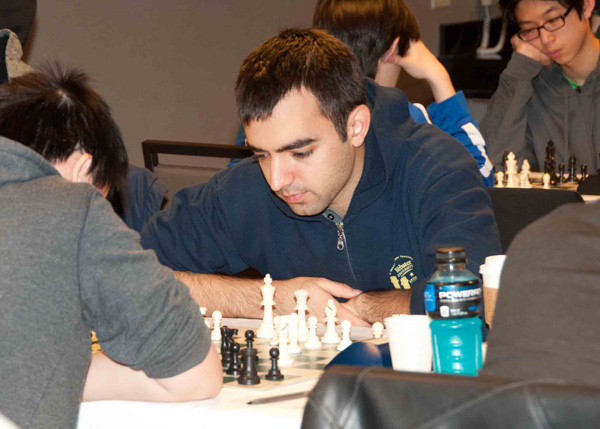 IM Eric Rosen
Several teams from the past came back as well. The long standing trio of Sam Schmakel, Eric Rosen, Michael Auger returned as No Pawn Intended, which included Jeff Paykin on board four. Here's a fun game from Eric, who is back home from a whirlwind of travel in Asia.
Wisconsin Chess Academy (Erik Santarius, Alex Betaneli, Hersh Singh and Kevin Li) returned again this year, too, but in the final day of competition new teams were in the running for the final win. 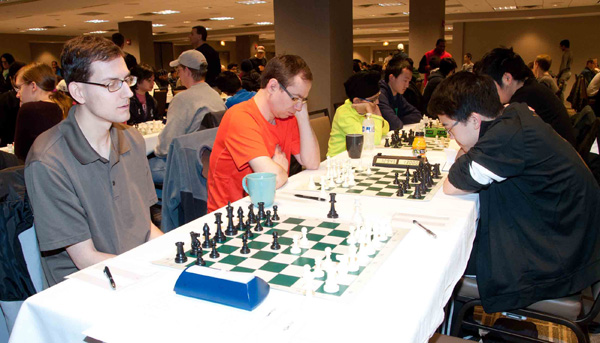 Wisconsin Chess Academy vs. the French Fries, Photo Betsy Dynako Zacate
One breakout team, the Random Rooks, consisted of strangers who just needed a team to play on. The team, Avinash Rajendra, Sasha Konovalenko, Jeffery Pokorski, Aditya Pillai, was tied for first place going into round four of five but were swept by Tide Pawn Challenge. The Tide Pawn Challenge team was made of Illinois high school chess players from several schools, including Zhaozhi Li, Matthew Stevens, Marissa Li, and Eric Starkman. They went on to win second place overall after defeating Chess Baes in the final round. Zhaozhi Li also took the top prize for board one with a perfect 5-0. 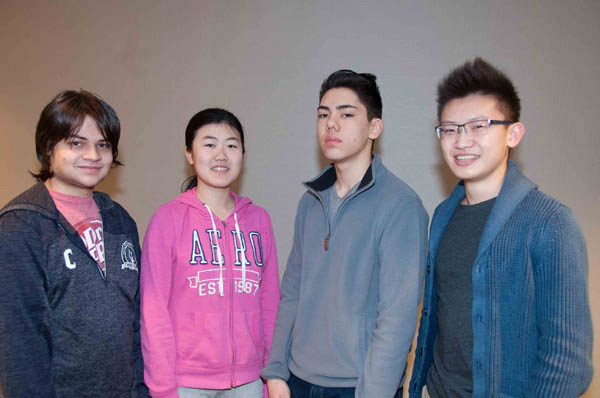 TIDE Pawn Challenge, Photo Betsy Dynako Zacate
The last two teams with perfect scores played off in the final round. Wisconsin Chess Academy was assigned white and insert team name here (Ed.Note- this was actually their team name!) took the black side of the table. Boards one was drawn, but the remaining games were nail-biting. On board four, Kevin Li and Rishi Narayanan was a must-win game to at least tie the match up.
This left the final game between Alex Betaneli and Vincent Do on board two to determine not only the match outcome but the final results of the tournament. Betaneli was able to secure the win for the championship title. More details plus the game will be published in Chess Life Magazine.
The blitz event held on Saturday night had 48 players fighting for the Northern Blitz Championship title. The games were non-stop and featured 14 players with ratings over 2200. Andrew Tang aka penguingm1, the USA’s newest GM ran away with first prize. 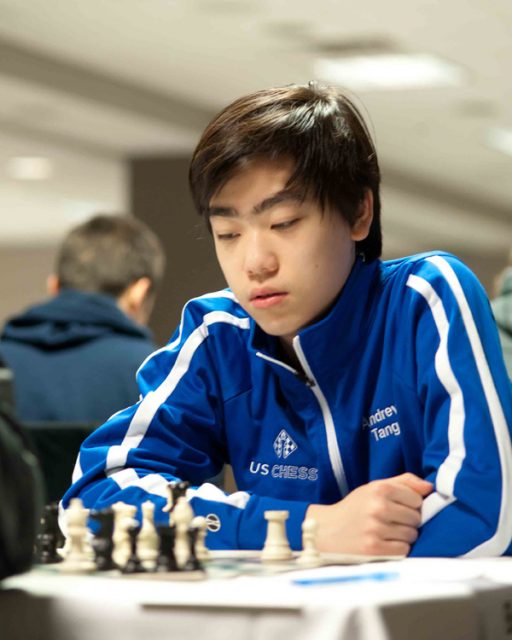 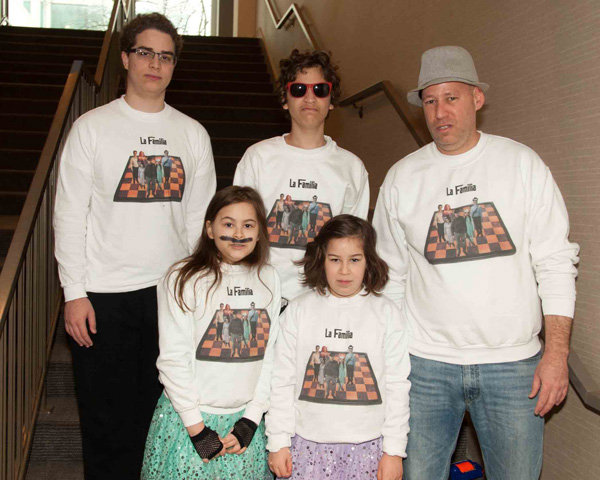 The winner of best team name and costume were harder to decide this year. The organizers eventually had the crowd help vote for best team name, and the title went to Chess Baes with Gopal Menon, Eugene Yanayt, William Armil and Aidan Carey. 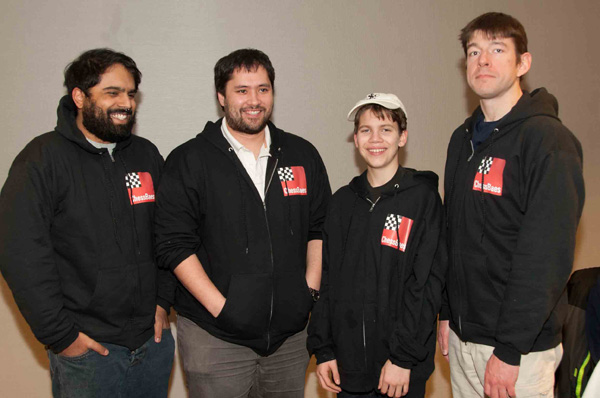 Chess Baes, Photo Betsy Dynako Zacate
The final two teams in contention for best costume were teams La Familia and The Yellow Shirt Mob. The yellow shirts the Mob sported where made to match those worn by directors as at CCA events. Panner explained, “The team was making a playful riff at the often sub-standard and tardy staff at CCA events.” On the front, their shirts read, “When does the Blitz start?”; answered on the back with “3:00am.”  Like those they were making fun of, they did not score the highest marks. Instead, La Familia took top costume honors. 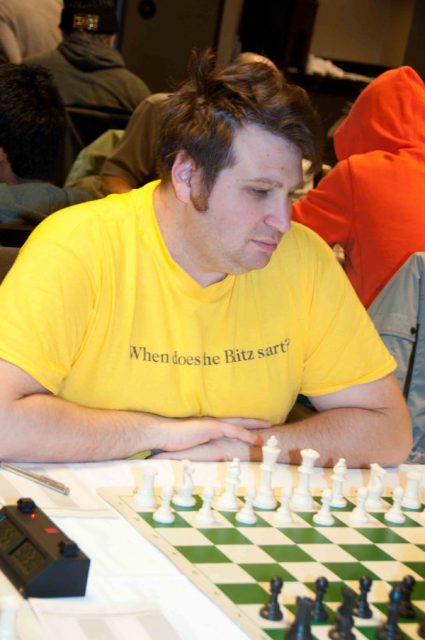 Daniel Parmet of the Yellow Shirt Mob, Photo Betsy Dynako Zacate
La Familia was comprised of an entire family, father Nimrod Bareket and his children Adam, Tom, Aya and Hill. As the back of their costume sweat shirts indicated, they are working on getting mom to play next year, as well. 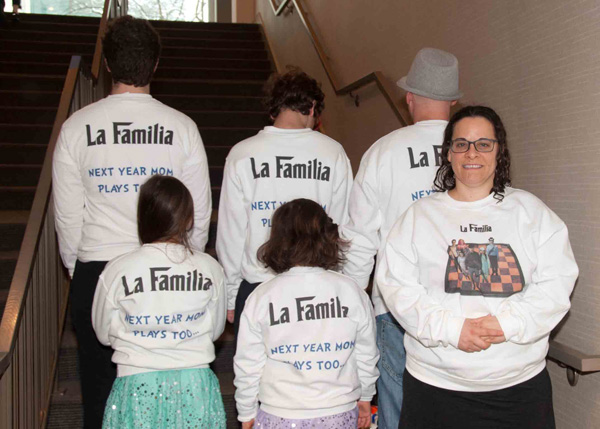 The front of the shirts showed the entire family standing on a chess board with the team name up top. Props, which are often included with the most exciting costumes, were designed to make poke fun at people of Mexican heritage being called nothing but drug dealers. The players brandished knives, a head on a plate and even fake drugs (flour in baggies).
It seems safe to say that this year’s event will be even larger and more fun next year as before the tournament was over the players and the organizers were already making plans for 2018.
Browse final standings here.
Find out more about Betsy Zacate Dynako on her official site.
Look for Vanessa Sun's report on the US Amateur Team East tomorrow or late tonight (interim report here), and also to Grandmaster Priyadharshan Kannappan's report on the US Amateur Team West later this week.
SHARE: