No prisoners were taken in the fourth round of the 2022 U.S. Senior, Junior, and Girls’ Junior Championships, with 12 (out of 15!) decisive games across all three sections! GM Larry Christiansen, WFM Sophie Morris-Suzuki, and GM Christopher Yoo all ended the day with well-earned victories to keep them at the top of their sections. However, equally impressive is the fighting spirit the rest of the players are showing as they strive to jump back in the race. 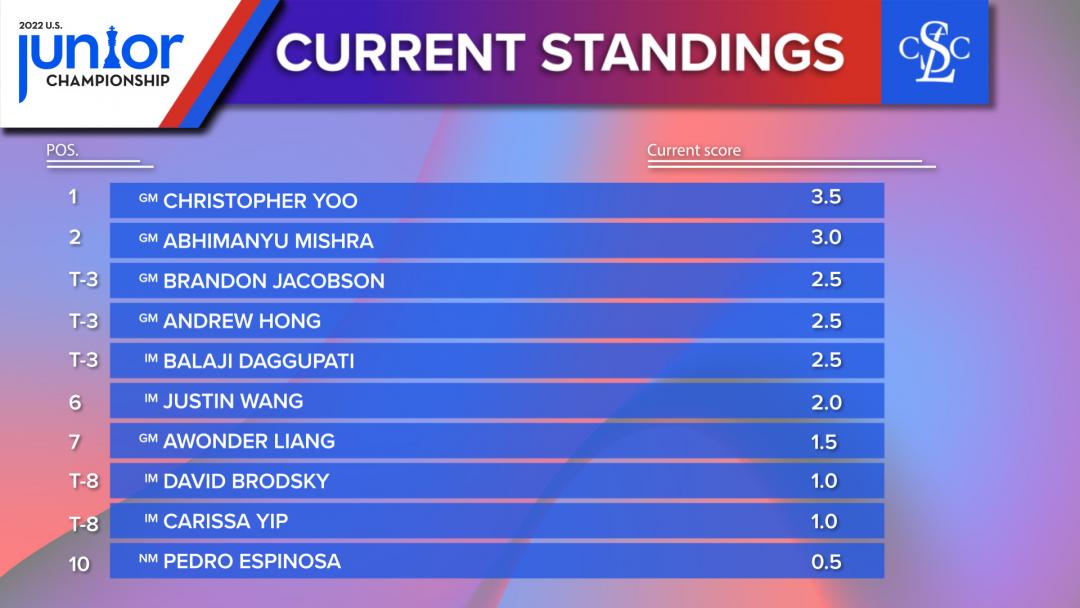 2021 U.S. Women’s Champion IM Carissa Yip has had a slow start in the Junior Championship with two draws and a loss heading into Sunday’s fourth round, but she threw the dice with a King’s Indian Defense against GM Awonder Liang. 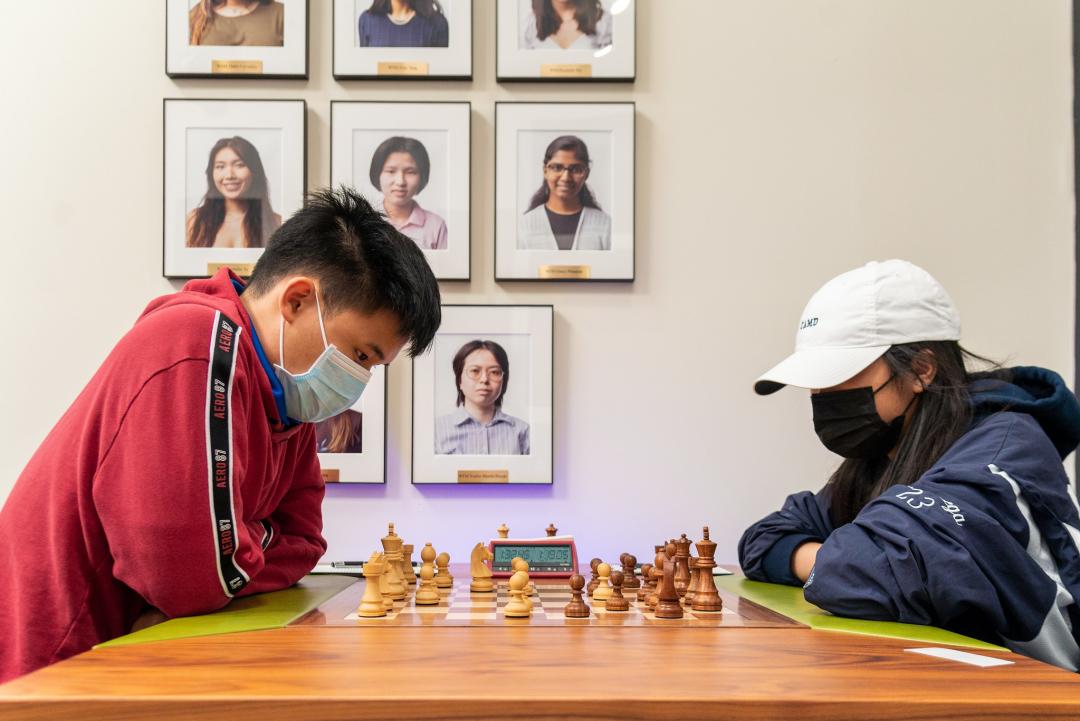 Before Yip could generate a stable position, Liang’s early 6.h4 casted a shadow she did not have time to escape. The youngest GM in the world, Abhimanyu Mishra, defeated to Pedro Espinosa to take second place in the standings while IM Balaji Daggupati exhibited tempered maneuvering in the middlegame, breaking IM Justin Wang’s defenses. 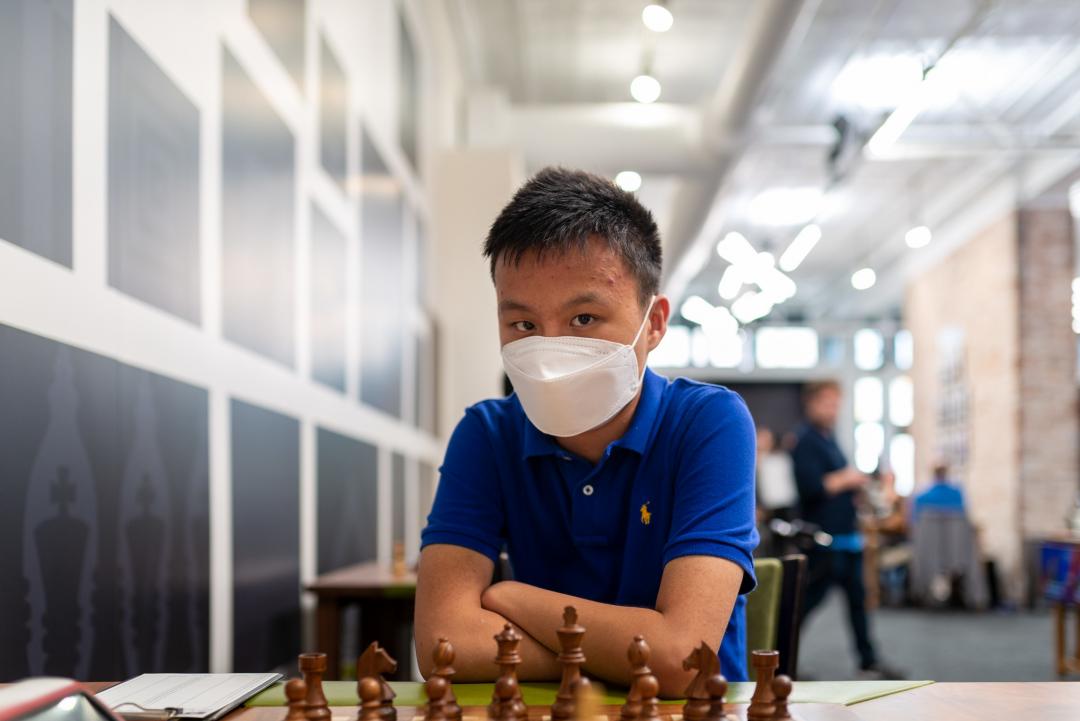 GM Christopher Yoo essayed the French Defense against GM Andrew Hong, a former co-leader, and did all Francophiles proud with this effort: 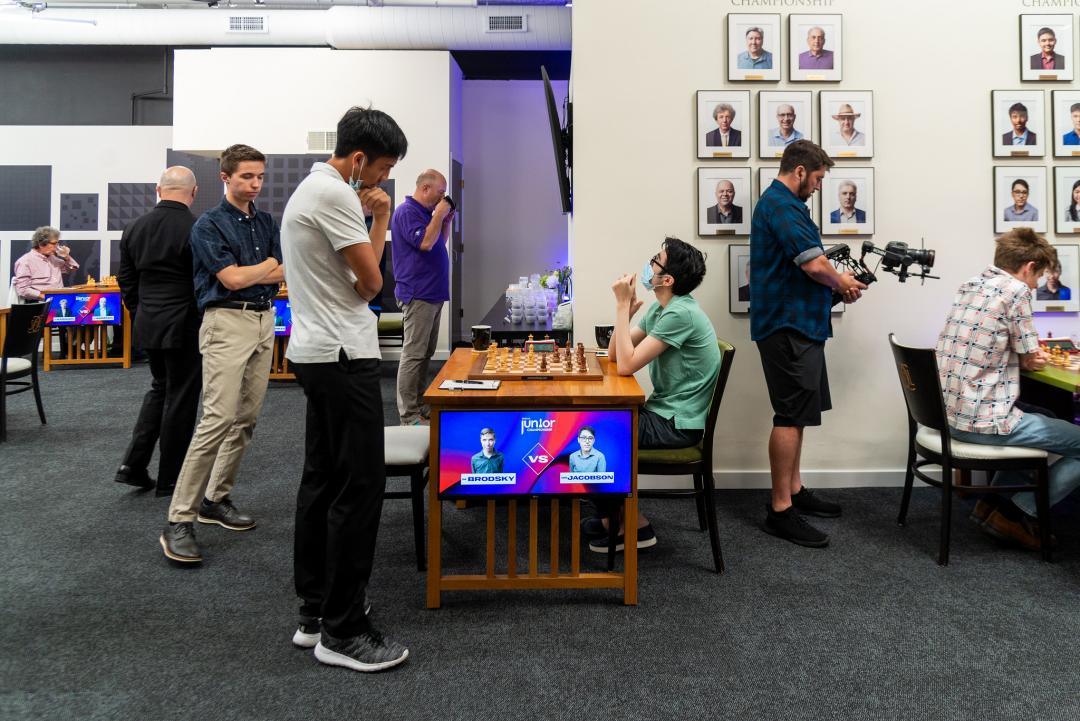 It was the play of GM Brandon Jacobson was most impressive in this round, sifting through the dissonant nuances of the Giuoco Piano better than his opposition, IM David Brodsky: 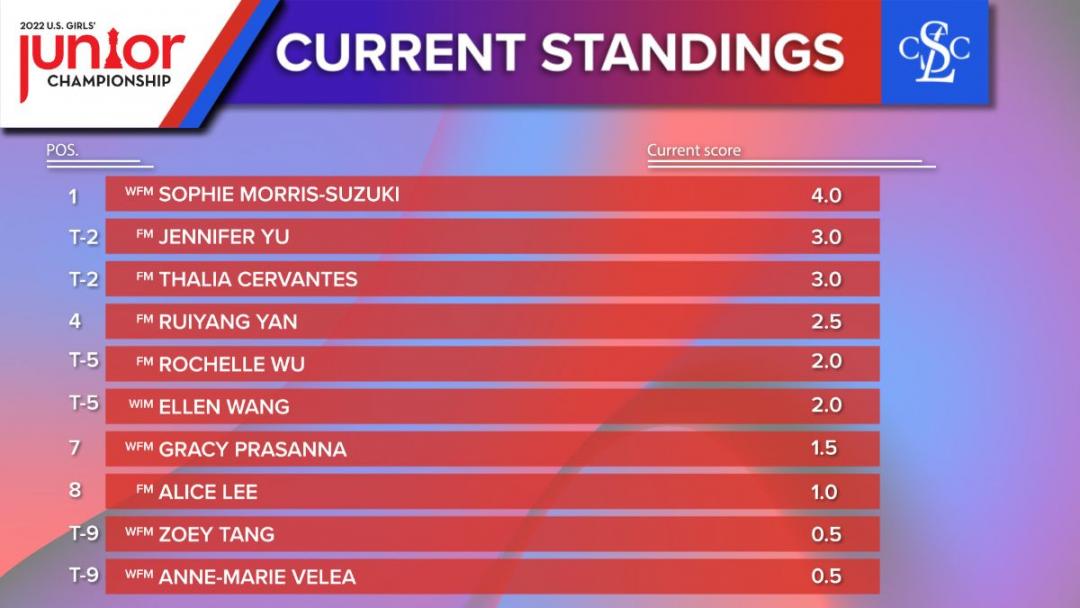 FM Rochelle Wu had an up and down game with FM Thalia Cervantes Landeiro, first with a difficult opening, then fighting back to attain a huge advantage that unfortunately slipped in the endgame. Wu couldn’t find the “only-move” that was far from obvious during the pressure both sides faced. 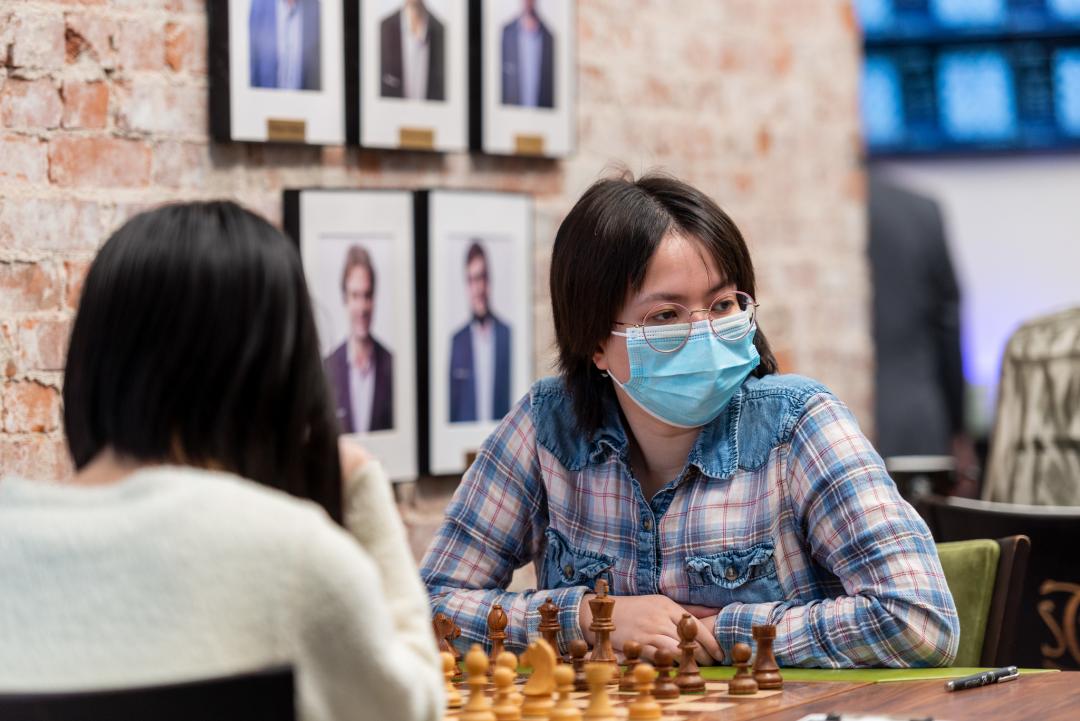 But the story of the day is WFM Sophie Morris-Suzuki, who just can’t be stopped with an incredible four points from four rounds thus far!! On Sunday they faced FM Alice Lee in a Grünfeld. Morris-Suzuki did not overreach in the position, but when they saw their chance, they took it: 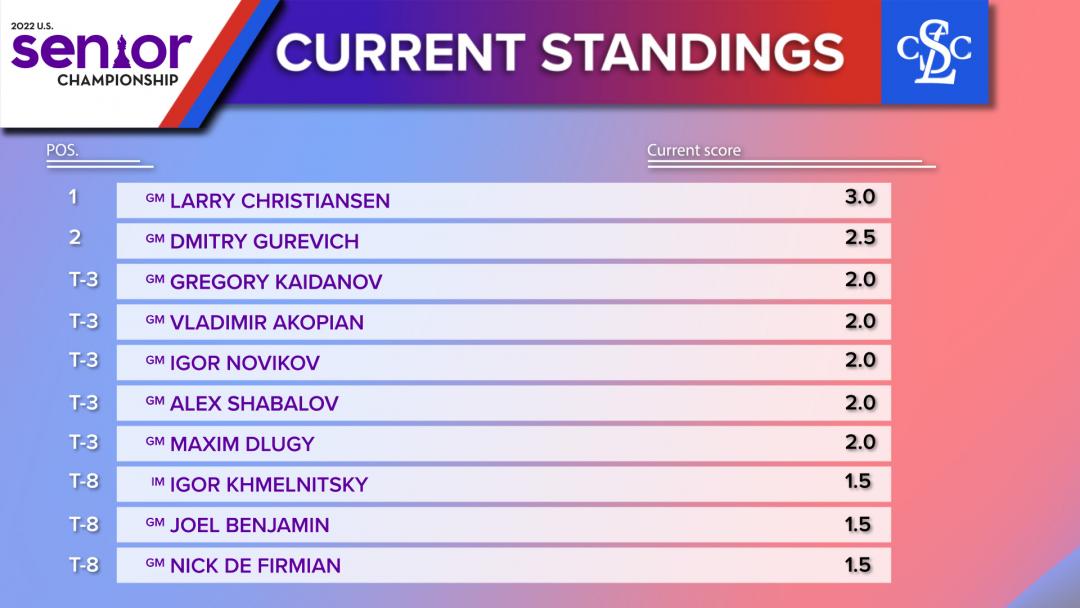 GM and Chess Life columnist Joel Benjamin started well after the first three rounds, and in round four he faced the player at the bottom of the standings, IM Igor Khmelnitsky. 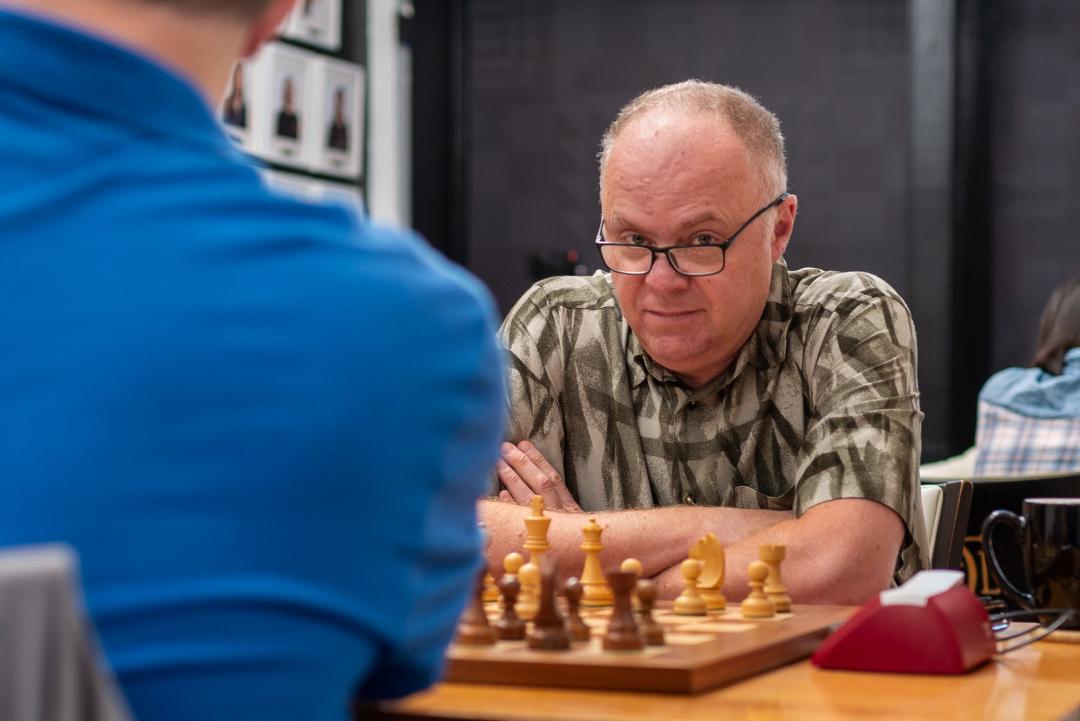 But the 2021 Irwin winner could NOT be counted out. He defeated Benjamin, and in doing so, set the whole group settling in the tension of a point and a half between first and last place!

GM Gregory Kaidanov and Vladimir Akopian were the only players that ended their game in peace. GM Dmitry Gurevich won convincingly against GM Igor Novikov, while GM Nick de Firmian could not hold against GM Alexander Shabalov, who’s slowly trying to get up the Shaba-ranks!

GM Maxim Dlugy was a co-leader heading into Sunday’s games, but GM Larry Christiansen is sustaining the class of consistency and gained a win after Dlugy made a small inaccuracy that grew into something more nefarious:

We’re just at the halfway point of these events, with the leaders refusing to be caught, but the players near the middle/bottom looking like they’re gaining a second wind. Is this a test of endurance or ferocity? Tune in today to begin to find out!