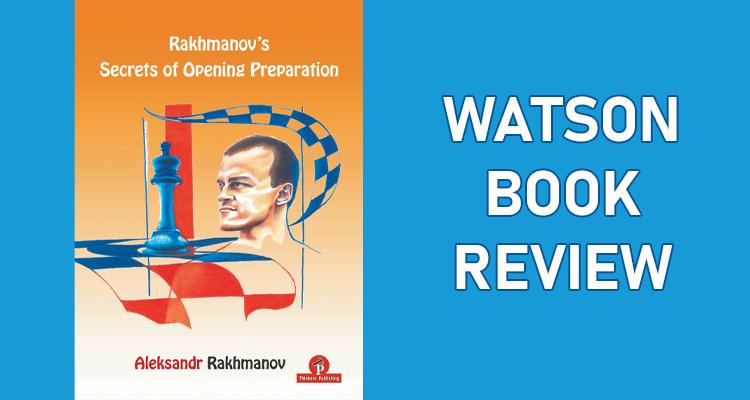 Originally published in the January 2022 issue of Chess Life.

Chess opening preparation has undergone a dramatic change over the past decade, both at tournaments and in between them. In the past, more experienced and higher-rated players tended to gain a substantial advantage in the opening, but today the average tournament includes many players — especially young ones — who are using online sites such as Chessable and Modern Chess, combined with massive databases, to memorize large swaths of opening theory on a level comparable to masters and even grandmasters. This leads to the odd situation at tournaments at which, even if the pairings go up an hour before the game, the savvy competitor has time to ascertain the opponent’s favorite openings and quickly verify what the currently recommended lines on Chessable and other sites are. It’s a new world.

It’s clear that opening books need to adapt to the times if they are to remain relevant. Fortunately, specialized repertoire books about a single opening can provide the reader with a variety of options and still be able to offer considerably more explanation, ideas, analysis than website products. But general repertoire books that try to cover a lot of ground are particularly vulnerable to the latest new move being readily available a click away.

GM Aleksandr Rakhmanov’s Rakhmanov’s Secrets of Opening Preparation offers a unique approach that should make it appealing to those intimidated by the flood of theory. The book is an entertaining games collection, to be sure, but with a huge emphasis on the opening, including separate sections of analysis on variations that provide the reader with a loose repertoire versus all important options.

A 2650 grandmaster (peak rating 2676 with 2700+ Rapid and Blitz ratings), Rakhmanov describes himself as follows:

“I play simple positional chess and like to play the endgame. I don’t look for complications for the sake of complications, but if the position requires sacrifices based on the situation on the board, then I will do so without hesitation. I like to control the course of actions; therefore, I would prefer to play with the initiative without a pawn than vice-versa. In general, giving the opponent dynamics is a bad idea. In most cases, my game is built on pawn structures. I adore positions with weaknesses, doubled pawns, and a better arrangement of pieces. I prefer to play short opening variations with a fixed pawn structure and positions with an open center.” (pg. 8)

You will see these preferences reflected in a repertoire that emphasizes solidity and generally avoids dynamism, as I’ll outline later. But against lower players (especially reflected in his youthful games) he often plays somewhat more riskily, but within the context of truly non-theoretical lines. For example, he has consistently employed the Rubinstein Variation of the Sicilian Defense (generally called the “Nimzovich” Variation in the West), 1. e4 c5 2. Nf3 Nf6, allowing the critical 3. e5 Nd5 4. Nc3.

This has long been considered better for White, but Rakhmakov’s opponents have either not studied the theory, or are otherwise put off their game. In my database, remarkably, he has scored 19 wins with six losses and 14 draws after 2. … Nf6, with an over 100-point performance rating lead. He has a 2561 performance rating after the critical 3. e5 Nd5 4. Nc3 Nxc3, only 10 points below White’s performance rating for those games; several of these were played against 2600+ opponents in the past few years (i.e., the opening had no surprise value).

I spent five pages of dense analysis on this move in my Mastering the Chess Openings, Volume 3, and got flak for wasting so much space on an “inferior” line. As far as I know, no other book or article devotes more than a brief analysis to it.

But over many years, in spite of common knowledge that he plays it, Rakhmanov has scored 16-9-2 with a 2700+ performance rating after 2. Nf3, with a 300+ performance rating advantage over his opponents (one of them a game versus Carlsen in which he stood better and Black only just escaped with a draw). This includes a 12-5-0 record and 2868 performance rating in what is considered the main line for Black: 2. … e4 3. Nd4 Nc6 4. e3. There’s a real case demonstrated here for having a portion of your repertoire in less respectable variations. As another option “to play for a win against players below 2500,” he uses 1. e4 d5.

For the most part, however, Rakhmanov plays safer mainstream openings of current theoretical importance, so there’s plenty of material for the active tournament player. Versus 1. e4, he has a lifetime of playing the Petroff, but several different variations, saying, “My openings are not that common. Even in the Petroff, I choose my own options most of the time.”

Rakhmanov devotes a lot of analysis in the book into his openings as White. He plays 1. d4, 1. c4 (see above) and 1. Nf3, often transposing into 1. d4 systems. There are many tips and ideas for White in the English Opening and also after 1. Nf3, but for reasons of space, let me point out just a few of his 1. d4 choices.

A 34-page section is devoted to games and dense analysis of 3. cxd5.

Apart from the games and analysis, Rakhmanov gives a lot of general advice. He has a section on common mistakes in the opening and discusses the nuances of preparation at some length, including how it succeeds and when it goes horribly wrong. He describes how to look for weaknesses in your opponent’s repertoire and takes into account factors like age and experience, playing style, frequency of participation in tournaments, and even their country, since players from, say, India or Armenia tend to play very differently and follow different opening fads. He even provides his specific approach to preparation for a forthcoming game in the Introduction, and the concrete details can easily be replicated by the reader.

The games mostly go through the year 2019, and the last chapter shows 10 games from 2020, played in a six-month period after he had finished the book and wanted to use the analysis he prepared for it. It’s a nice touch, since it shows what kinds of problems and surprises he ran into, and how his very strong opponents either rose to the occasion or, in a few cases, collapsed because they weren’t well enough prepared for the variations.

This is an extremely original contribution to the literature and I hope it is indicative of how books about openings can remain relevant in a time where seemingly everything can be learned by clicks and keystrokes. A fine effort by a strong player and author from whom I hope we’ll be hearing more.