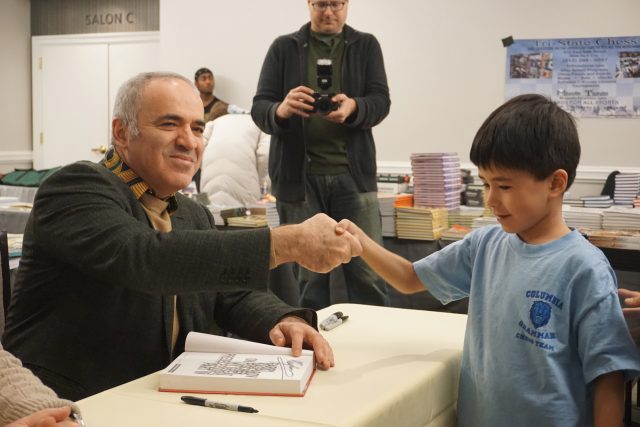 All heads in the room turned to look as the legendary former World Champion Garry Kasparov made his way through the aisles. He glanced at a few boards, silently making his judgments on several positions. William Graif, who placed second in the highest section of the tournament, saw Kasparov nod to himself in approval of one of his moves. Graif half jokes that it was the 'greatest moment of his life.' This was only one of the many exciting memories players took away from the 2018 Greater New York Scholastic Chess Championships. Sponsored by the Kasparov Chess Foundation, the tournament has welcomed Kasparov for signings, and Kasparov even tweeted a couple photos from the event. https://twitter.com/Kasparov63/status/950127989399863296 These specially sponsored events only happen a few times a year, namely the All Girls National Championship, Greater Chicago, Greater Mid-Atlantic, and Greater California Scholastic Chess Championships. This year’s event boasted a record breaking turnout of almost 1500 players- the maximum event capacity- even though it took place in a long, freezing cold streak. The weekend’s weather was referred to in the Kasparov Chess Foundation’s news update on their website  as not much of a nuisance for the dedicated scholastic players that showed up to the tournament. However, in a notable story of complete dedication to the event, one player, Bowe Siegelson, did actually face a number of weather related obstacles: his flight back from Colorado was cancelled on Thursday and his family rebooked a plane to Philadelphia instead. Then, his family drove to the tournament from Philly just in time to make it to the tournament. He also got sick in the middle of the event, but pulled through, finishing 7th place in the Primary Championship section. He, like many other players, showed extreme commitment to chess this weekend. The tournament featured 14 sections overall, with both class sections and an open championship section for K-1, primary, elementary, junior high, and high school. All levels were extremely competitive, with teams from all over the city and individuals without their schools or large chess programs backing them. Every finisher played an impressive 5 or 6 games, which can be quite lengthy. 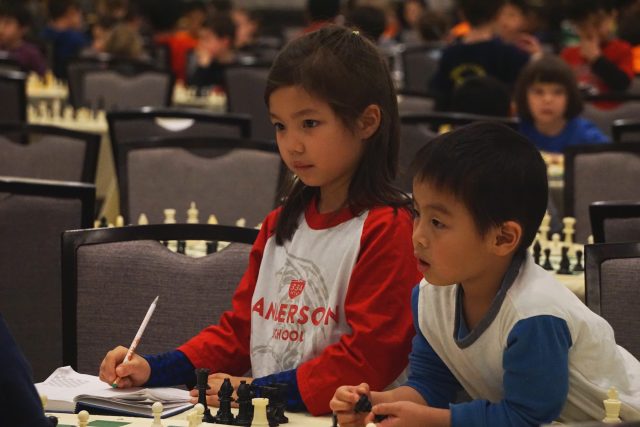 A few kids even had blitz playoffs, such as CM Abhimanyu Mishra and WCM Iris Mou in the Primary Championship. An important part of the awards was special “pink slips” given by the Continental Chess Association, which allowed many players to receive free entries to various CCA tournaments. The top 4 scoring individuals in each section, top 2 teams in each section, and to the top 3 Mixed Doubles teams among High School sections earned free entries to specified tournaments. Exact rules at: http://www.chesscenter.cc/jan18/2018-GreaterNYScholastic-Prizes-HighSchool-Championship.htm Davis Zong Sr. said of this opportunity, “Davis [Zong Jr.] has won free entries to the World Open for the past several years, thanks to the city championship.” 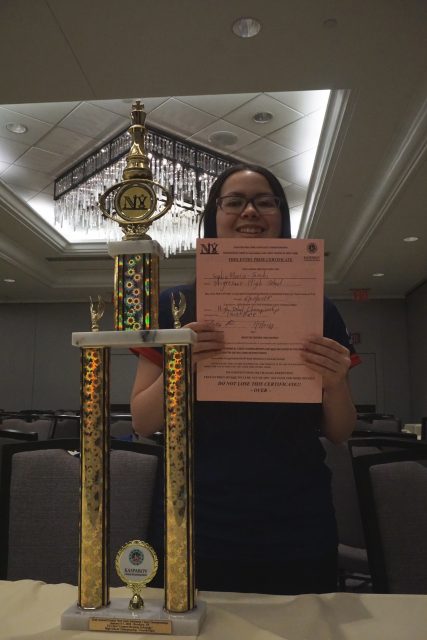 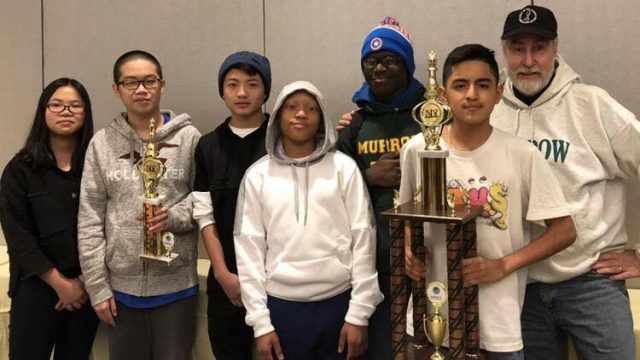 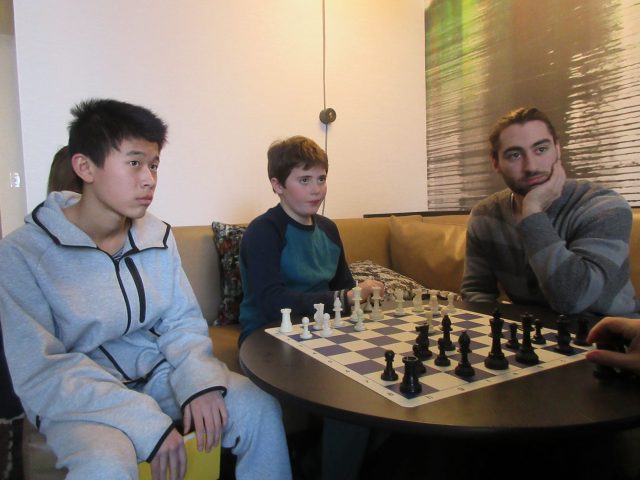 Coach IM Alex Ostrovsky and students preparing. Photo by Ken Kubo
This was FM Ethan Li’s 3rd championship win in a row, ending his last scholastic year on a strong note. GM Michael Rohde annotated several games for this article, including Ethan's key victory over Sophie Morris-Suzuki. NM Justin Chen recently won the 9th grade section of the K-12 National Championships, and excelled at this championship too. With 5.5 points, he scored clear first above NM Wesley Wang, Ethan Gu, Jeremy Zheng, Brandon Wang, and Eugene Yoo, who all scored 5 points. A few players in the High School Championship did something exceptional besides the big winners: some middle schoolers played in the high school section.  Katherene Qi tied for 2nd (8th place on tiebreaks) as a 7th grader rated well over 1900. Other players included 7th graders Avery Hood, Julian Daniels, Dylan Challenger, Amadi Utak, and 8th graders Harris Lencz, Daniel Levkov, and Theo Kogan. Nathaniel Shuman, who placed 12th, played in this section as an elementary school student! Columbia Grammar and Preparatory School even finished as 3rd place team with a team composed of only middle school players. GM Michael Rohde was among the coaches for CGPS. There were still other impressive feats in the highest section, like Sophie Morris-Suzuki’s tying for 2nd (4th on tiebreaks) despite taking a bye! Katherene had the same level of success, as she also took a bye in the first round. One High School team, Edgemont Junior/Senior High School, placed 4th with only 2 players: Will Graif and Max Li! To compare to the typical team member amount, the 1st place team, the Edward R. Murrow High School team, had 6 players. Graif and Li scored 4.5 points each, with a total of 9 points. 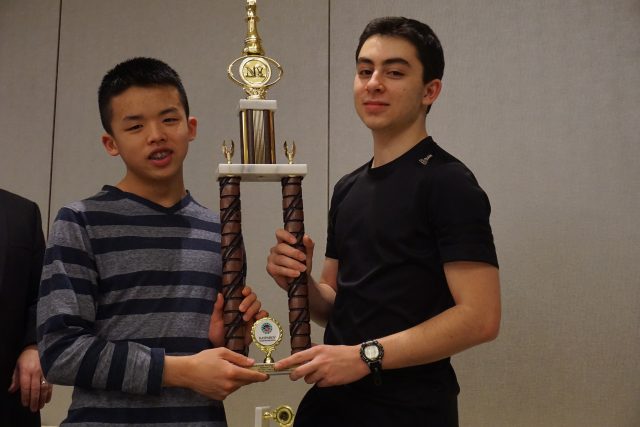 The Edgemont Junior/Senior High School team: Max Li and William Graif
In the younger sections, CM Liran Zhou showed his prowess, winning all his games. One of his notable wins was against 2nd place winner, Davis Zong Jr., in the last round. Iris Mou pulled off a win over her higher rated opponent, Kevin Duong, in the 5th round, which propelled her into the blitz playoff with CM Abhimanyu Mishra. 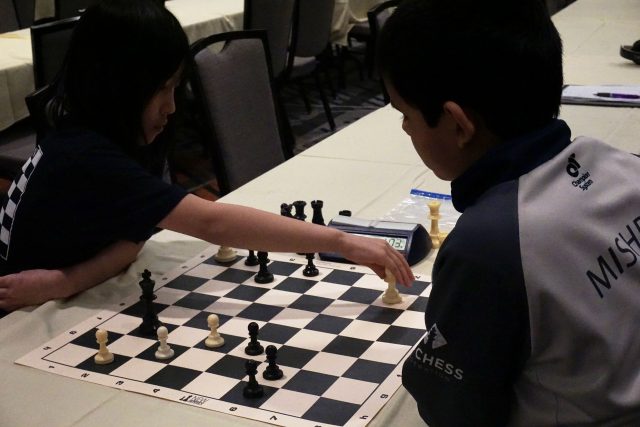 Although she lost the playoff against Mishra who is rated about 350 points more than she is, she is still the co-champion of the Primary section (playoff was for CCA free entries). Ryan Zhu emerged as the K-1 Champion with a perfect score. A player from New Jersey and the 22nd best player in the country under 7 years old, we can expect to see Zhu progress over the next few years. 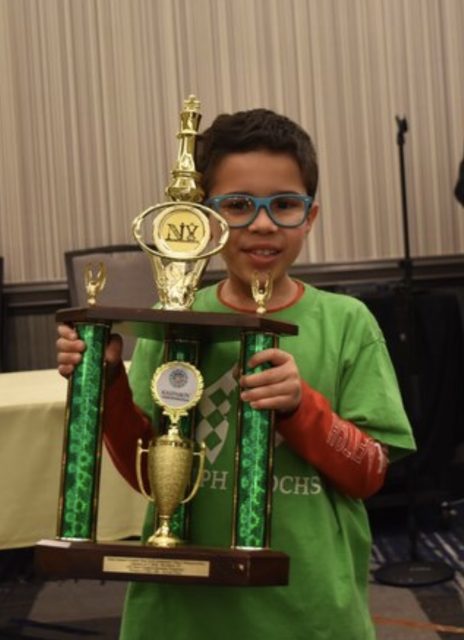 Joseph Fortuna, the only 10-0 scorer in the event. Photo courtesy of Angel Lopez
One young competitor went 10-0 over the weekend. 2nd Grader Joseph Fortuna from P.S.111m began with an impressive 5-0 in the Elementary u700, jumping from a starting rating of 432 to 842. Joseph returned for some more chess Sunday and once again went 5-0, this time in the Primary u600. Onto exciting stories beyond the results, it is quite clear that the Greater New York Scholastic Chess Championship has slowly been extending its geographical reach in recent years. Although it is often referred to as the “City Championships,” the event allows players from other areas of New York and other states to play. Long Islanders from Jericho Middle School and Jericho High School decided to play the tournament for the first time, placing as the 2nd highest scoring team in the High School Championship section and 3rd in the Junior High. Their school has recently showed an influx of talent, from youngest NM in U.S. history, Liran Zhou, to graduating USCF Scholar-Chessplayer of the Year NM Warren Wang. 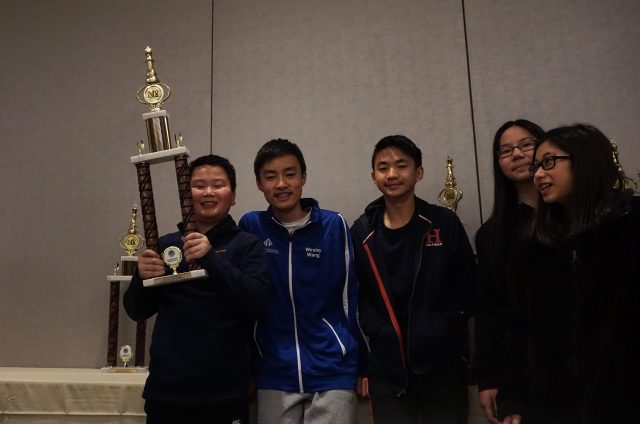 Jericho Middle School team, [l to r] composed of  Howard Zheng, NM Wesley Wang, Joshua Dong, WIM Evelyn Zhu, Natasha Kulviwat
“We want to show our schools that competitions are worthwhile. We have been Nassau County Champions 4 years in a row and in the long term, we want to extend the team to national level tournaments,” says Team Advisor Matthew DeMarinis. “Besides tournaments, my co-advisor, Paul Bode, and I help focus the chess club on developing itself as a place to review games, play blitz, and build up a general camaraderie in a non-competitive environment.” Christian Brothers Academy from New Jersey also decided to join the competitive New York environment. This school team played in the K-12 National Championship a few weeks ago, placing first in the 12th Grade Team category. The previous year, they were the top U1900 team spot at the 2016 National High School Championship. Clearly, the team has had a dominating performance in the past few years. However, they do have one remarkable aspect to their success: the students do not start competing in chess tournaments until high school. Many of the players began playing chess competitively at 14 or 15 years old, which is at odds with all the younger children that seem to frequent such big tournaments. One high school senior notably made 2100 USCF in 3.5 years. The school has shown immense support for the boys, showing just how important it is for schools to recognize chess as an important activity or club. At CBA, the students get Varsity and Junior Varsity letters, and anyone can join their club. The program is currently working to get more members in its school of 900 students and for the 25+ members of the team to stay involved with chess. “These boys learn to grow as not only chess players but as people. They learn to communicate better and that most important is the team and not the individual,” commented Coach Patrick Melosh, one of the three coaches for the team (others are Experts Brian Meinders and Marc DiCostanzo, who is also a CBA alum). “With this mentality, they are more humble, more mindful of sportsmanship.” There is clearly much more to expect from this team, even if they have been competing for almost 20 years!

Photo courtesy of the CBA chess team
Chess in the Schools also made a recent reappearance en masse to the tournament, bringing over 44 students funded by generous donations to their organization. Most students represented their own schools, such as many members of the Murrow Chess Team, which was the highest scoring team in the High School Championship. “We decided to make #TheCities the first leg of our of our strong chess schedule in order give our students the best opportunities in the NY chess scene,” said Shaun Smith, CIS’ Director of Programs, about why so many students decided to enter the Championship. 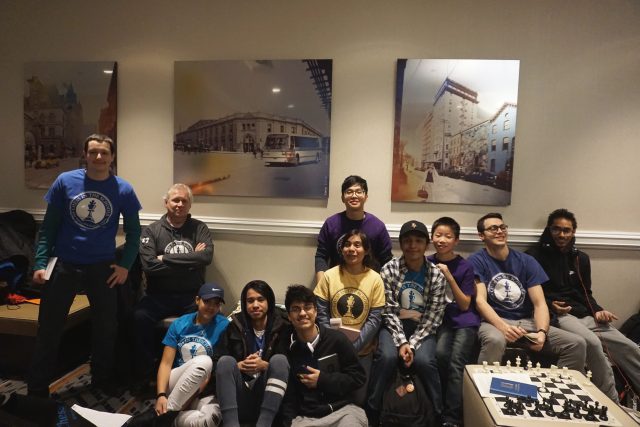 Many of the CIS kids showed their representation by wearing their organization’s T-shirts. Photo does not show entire team
The organization has a “College Bound” initiative helps low income students to prepare for college by helping them with community service projects, providing extra academic resources, and allowing them to work as assistant tournament directors. This Greater New York Scholastic Chess Championship, the students had a special opportunity from the program: those with a plus score could travel with the team to the State Championships and some would also go to the Amateur Team East and Philadelphia Open tournaments. Such an occasion would incentivize the chess players feel motivated to train and play their best, rewarding hard work. Although the weekend was about celebrating the successes of chess players, it could not have run so smoothly without some several key people who supported the event. Both parents and coaches of all the players were patient, especially during several playoffs that delayed the awards ceremonies. The tournament staff and tournament directors were accommodating, helpful, and informative. These included Chief TD and organizer Steve Immitt, Chief Assistant TD David Hater, Harold Stenzel, Korey Kormick, Nicole Maffeo, Aiya Cancio, Michelle Martinez, and the McGreen family. Danny Rohde, the Event Manager, also did an excellent job making announcements, handling the awards ceremonies, and making sure many aspects of the tournament ran smoothly. 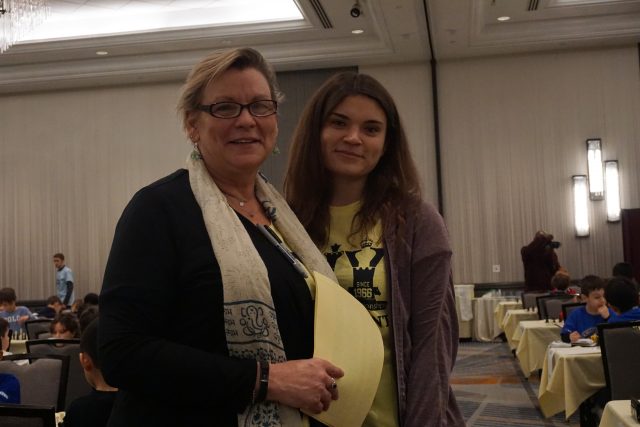 Martha Underwood and her daughter, Aiya Cancio, formed quite a great TD team!
The Kasparov Chess Foundation has been an enormous part of the tournament’s success and continues to include special opportunities for this event. IM Jay Bonin also stopped by to offer a few words of encouragement to some of the players, as he had played the event many years ago. Jay is recognized for being the most active player in the country, and when Danny Rohde asked the Junior High and High School sections who had played him before, almost every player raised his/her hand! 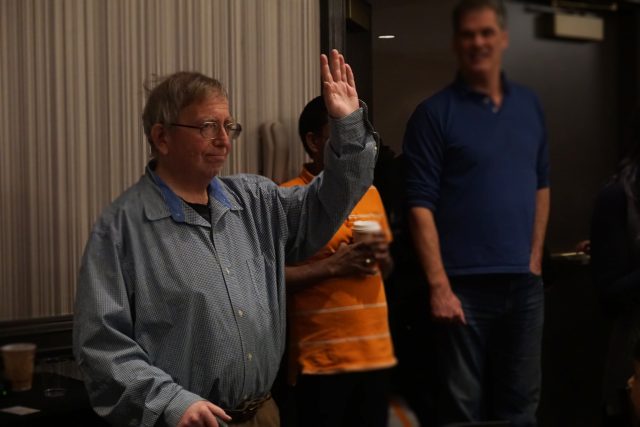 IM Jay Bonin
GM Maxim Dlugy played blitz with anyone who wanted to challenge him by the entrance to the tournament, also holding raffles for lessons and DVDs. The USCF Women’s Committee inspired many girls attending the tournament to continue with chess, holding a small raffle and collecting surveys. Their volunteers were Alex Wiener, who was formerly a member of the Brown University chess team and played plenty of scholastic chess, and Kimberly Doo. Lastly, GM Michael Rohde also contributed by volunteering to analyze several games from the event. This event can only get better as time goes on and next year, it will no doubt be bigger, better, and just as record breaking. This tournament was organized by the Chess Center of New York and Little House of Chess. All photos by Vanessa Sun unless otherwise specified.
SHARE: