US Chess Girls Club Invited to "Judit Polgar vs. The World" 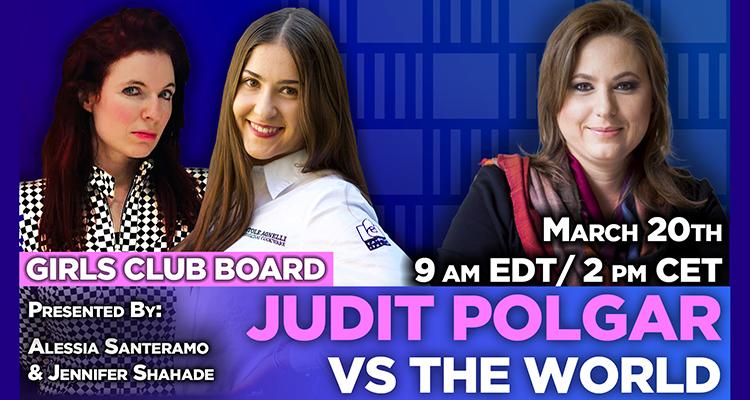 The US Chess Girls Club has been invited to compete against Grandmaster Judit Polgar for a special simul event, “Judit Polgar vs. the World” at 9 a.m. ET on Sunday, Mar. 20.

The simul features Polgar facing off virtually against 10 teams from all over the globe, captained by popular chess personalities including notable female players like Anna Rudolf, the Botez sisters, and Anna Cramling.

Following the games, Polgar will summarize and analyze the moves, discuss strategies, and give feedback on the teams’ performances.

US Chess Women’s Director Jennifer Shahade will captain the US Chess team. “This is an exciting opportunity for the Girls Club,” she said. “Judit is one of the strongest attacking players ever and the greatest female player of all time. It will be an honor to play and learn from her.”

Female and non-binary players of all ages who are interested in joining the US Chess Girls Team for this event, should register through our Google form.

“Our team will be a truly international team,” Shahade added. “We’ll be including our cross-cultural program partners with Business Meets Chess & Kids, the Lighthouse Chess Club, and WGM Nadya Ortiz's Colombian group. Chess-in-the-Slums, based in Nigeria, will also help us make our first moves.”

“Judit Polgar vs. the World” will be broadcast live at https://www.twitch.tv/chessconnectsus.

The US Chess Girls Club board will be streamed live with commentary by WFM Alessia Santeramo on her twitch channel.