US Chess defeated the Irish Chess Union by the narrowest of margins – 6½-5½ – during an international friendly match held June 27th on chess.com. The two teams featured competitive matchups on every board between players rated between 2000 and 2450 FIDE. Between the twelve total boards, only two matches ended with a 3-1 or greater. All of the remaining 10 boards were either tied 2-2 or won by only a game: 2½-1½.

The two final matches determined the ultimate winner. With Team USA barely ahead of Ireland, 5.5 - 4.5 - boards 8 and 12 came down to the wire. On board 8, William Aramil trailed WFM Trisha Kanyamarala 2-1 and needed a win to tie the match. On board 12, NM Aakaash Meduri was tied with Peter Carroll, and needed a draw or win to secure the match for US Chess.

In a hard-fought battle, Aramil managed to win an exchange thanks to a dangerous passed pawn and was able to convert the not-so-simple ending. 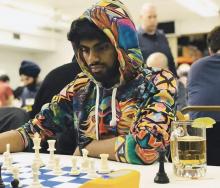 Meanwhile, Meduri, with black, found a way to win Carroll’s queen, though the Irish 12th board had plenty of compensation. Meduri played a simplifying variation to reach an endgame where he had an extra knight against two passed pawns and, after many efforts by both sides, the game was ultimately drawn.

A very special thanks goes to Gerry Graham, team captain and match organizer for Ireland. Gerry has proposed a rematch and more details on round two will be coming soon.

The match was streamed on the US Chess Twitch channel by host NTD Chris Bird and commentator and US team captain Pete Karagianis. You can watch the full replay of the match via our YouTube channel:

Three members of Team USA have also submitted annotated games from the event, which you can replay, with notes, below.