The US Championship Online Qualifier began last weekend for players rated under 2000, and this weekend will find the top-20 qualifying players to compete in a Final Swiss on December 5.

Both days last weekend saw its own qualifying event, the first in a series of online tournaments that will ultimately lead to a seat in the live 2021 U.S. Chess Championship. On Saturday, 362 US Chess members competed in a 12-round Swiss tournament of rapid G/10 games on Chess.com. Winners of the U1600 qualifier were:

Those top players qualified for the next stage on Sunday afternoon, joining 199 players rated 1601-2000 for another 12-round Swiss of rapid games. Winners of Sunday’s U2000 qualifier event were:

Those nine players have qualified for the next event this Saturday, where they will join a pool of players rated 2001-2400 for another 12-round rapid Swiss. The top 8 qualifiers on Saturday will advance to Sunday for one last 12-round swiss, this time for players rated above 2400. Sunday's event will produce 20 players to qualify for a Final Swiss on December 5, and then on to a knockout bracket that will whittle down a final two qualifiers. 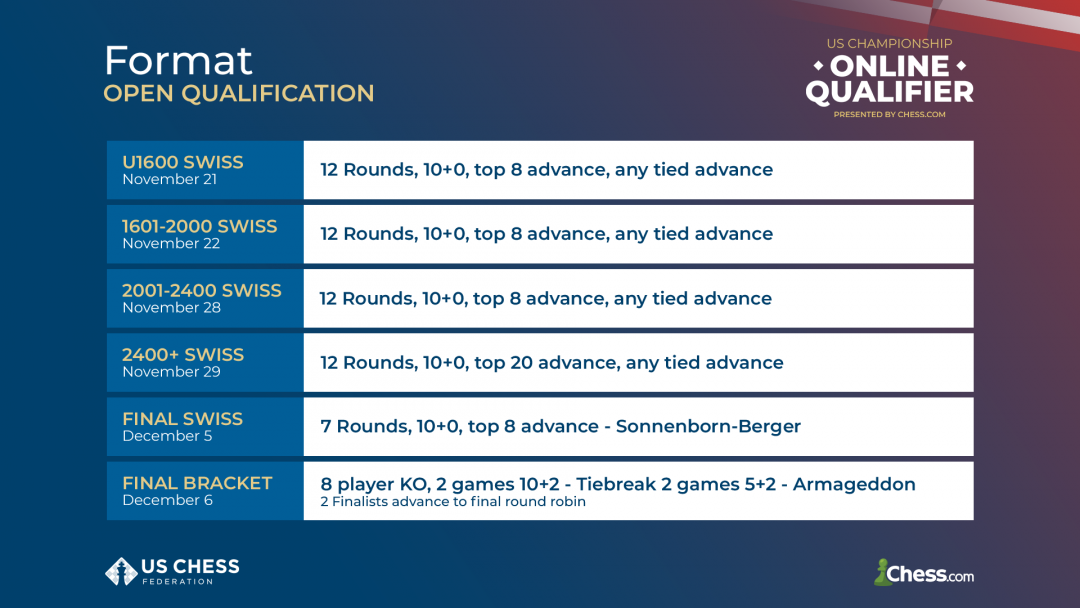 Along with last weekend's winners, any US Chess member rated above 2000 is qualified to join the events this weekend. Here are key details:

Here are the direct links to the qualifying tournaments. Keep in mind: you won’t be able to join them unless you are already a member of the US Chess Members Only club on chess.com: