2 rounds are done here at Marine Corps Base LeJeune outside of Jacksonville, NC.  Eight players have 2.0 scores, including two National Masters, Eigen Wang (US Air Force) and Mario Murillo (US Navy).  At this point it's still a bit too early to start reporting team scores, so we'll start that in the next report. There are two categories of Team awards handed out at this tournament, one for the top scoring military team (e.g. Marines, Army, etc.), and another for the top scoring military academy (e.g. West Point or Annapolis).  For the military teams, the top 6 players scores are counted, while it's the top 5 scoring players for the military academies. 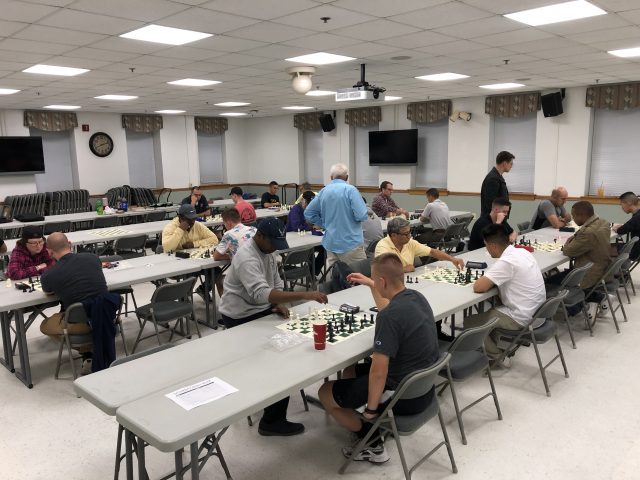 2019 USAFO Blitz (photo Mike Hoffpauir)
This lovely Saturday evening the players are enjoying 4 rounds of friendly Blitz (see picture).  The Marine Corps, namely Ms. Sara Walsh (Chair of the Military Chess Committee), has done a fabulous job of preparing to host the tournament.  Everything is first class, including the Pizza we're all enjoying between Blitz rounds. There are two more rounds Sunday, and one on Monday (Columbus Day).  If you care to watch the action, you can view three of the top boards at: http://usarmedforceschess.org.
SHARE: