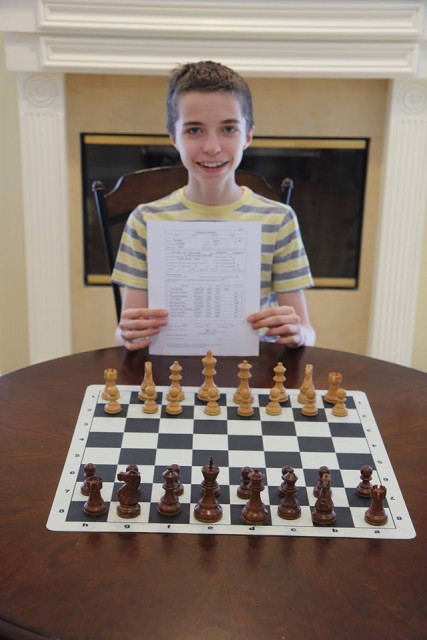 David Brodsky after earning his first IM Norm at the 2016 New York International
The 35th Empire City Open held from December 27-29th at the Hotel Pennsylvania in Manhattan was very strong as three GMs, five IMs, seven FMs, one WFM and fourteen NMs competed in the 60 player open section seeking their share of the $15,000 prize fund.  In the end though it was two FMs scoring 5-1 and tying for first.  By the halfway point of the tournament, all three GMs had suffered a loss!  At the conclusion of round four there were no perfect scores remaining.  Six players had 3 1/2: four FMs and two IMs. The upsets started in round one as top seeded GM Alexander Stripunsky opted for the fast time control, but fell victim to NM Ernest Colding.  The next GM to be upset was GM Alexander Fishbein who lost to NM Joseph Zeltsen in round two.  Finally in round three, GM Sergey Kudrin was defeated by IM Jay Bonin. The upsets of the highest rated players cleared the way for FMs and IMs to rise to the top of the crosstable if they could hold serve.  The two eventual winners did just that winning when paired down and each also won a small upset along the way. 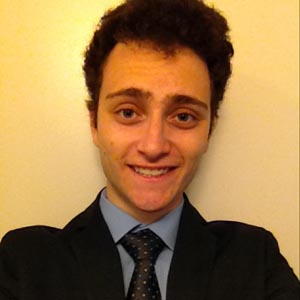 FM Levy Rozman
FM Levy Rozman was the first player in the tie and had the higher tiebreaks which garnered him the extra $100 bonus.  His path was a bit more unlikely as he unintentionally played the swiss gambit by drawing expert Eric Zhang in round one.  He played an A player in round two and won which gave him a 1 ½ start, but one would have thought winning the tournament with the highest tiebreaks would have been unlikely at that point.  However, Rozman won three in a row over FM Rico Salimbagat, Brandon Jacobson, and New York Champion IM Aleksandr Ostrovskiy to find himself on board one in the last round.  A quick last round draw with his co-champion FM David Brodsky sealed the deal for first place. FM David Brodsky had a more steady path to the top, but his tiebreaks were hurt by a forfeit win and by one of his late round opponents withdrawing.  Brodsky had relatively routine wins in rounds one and two and was 2-0 and on board four when NM Richard Shtivelband forfeited to him when he was delayed by the subway.  Brodsky was then 3-0 and wound up being paired up slightly in each of his last three round games.  Round four was an exciting draw between Brodsky and IM John Burke.  Brodsky sacrifices a pawn and an exchange, mounts an attack with kings on opposite sides of the board and obtains an advantage, but the game eventually ends in a drawn rook and pawn ending. Brodsky again launches an attack in round five. This time it was decisive as he defeated FM Igor Sorkin.  The game was complicated and had significant imbalaces for the entire game.  At various points, one side was winning and then the balance shifted.  In the end, Brodsky emerges on top. Brodsky and Rozman each won $1000 for their share of first with Rozman getting an extra $100 for finishing with better tiebreaks. One player in the open section won all his games, but did so in a rather unusual fashion. Cesar Apalla entered the Under 2100 section and started 2-0.  However, the organizers discovered he had a FIDE rating that converts to 2200 so he was moved to the open section.  There was a limit of two half point byes, so Cesar took byes in rounds 1 and 2 and an unplayed game in round 3 to start the event with one point.  He won all three games he played and finished tying for the Under 2300 prize with 4-2.  His provisional rating went from 1742 based on two games to 2557!  Shtivelband, Colding and FM Robert Sulman and expert Daniel Yedidia also finished at 4-2 and each won $180 for their share of the class prize. There was a four way tie for third place with 4 ½ points.  GMs Alexander Stripunsky & Sergey Kudrin, and IMs Aleksandr Ostrovskiy & Joerg Wegerle each won $150. The tournament was very well attended as there were 415 players in seven sections.  The one surprising thing was there were only 39 players in the Under 1500 section.  As is relatively common in the lower sections, there were significant rating gains by the lower section winners:  Robert Cheng gained 253 points in the Under 1500 section, Steven Reddy gained 237 points in the Under 1300 section and Charles Orbison gained 181 points in the Under 1100 section.  The section winners were: