Tricks and Treats at the Boardwalk Open 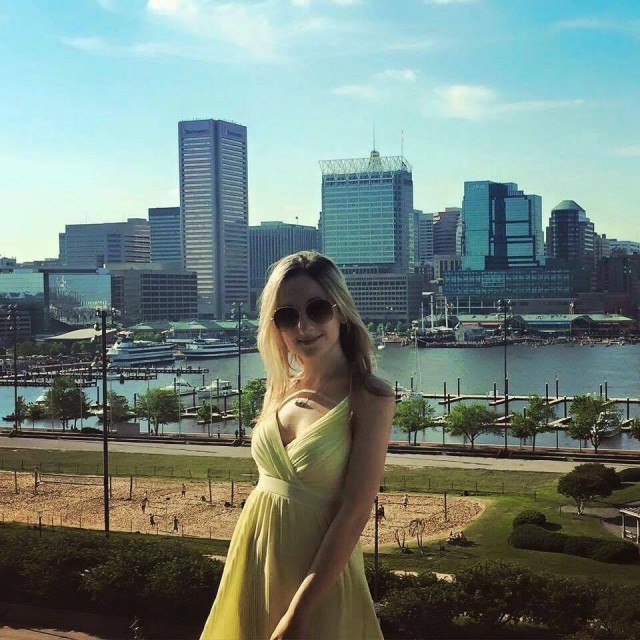 IM Nazi Paikidze took first in the Boardwalk Open on tiebreak
The 2015 Boardwalk Open was held at the Seaside Golf Resort in Galloway, New Jersey over Halloween weekend.   It may be unusual to lead off a story with the winner of an under section, but this is a story of tricks and treats.  Harold Scott tied for first in the Under 2100 section and took home the most money of any player in the tournament.  He won $1150 for his two way tie for first and then he and his fiancée Erika Mclean split the $600 for best mixed doubles team. The real reason to lead off with Harold is his relatively unusual way of winning the tournament.   Harold essayed the Swiss gambit, though I’m sure that was not his plan.  In round one, he was paired down.  He reached a completely lost position but he tricked his opponent.  He set up a stalemate trap and his Academy Award winning performance of “I hung my queen” got his opponent to bite.  In round two his opponent tricked himself.  His opponent had a king on f7.  His opponent thought it was a queen and played king at f7 takes h5 – obviously not legal.  Scott went on to win the game.  In round three, his opponent has one minute left at move 32 to make 8 moves for time control.  She leaves the board and comes back to find her flag down!  In round four, Scott’s higher rated opponent hung a piece! In round five, Scott asked a tricky question to the two NTDs:  can one mixed double team offer advice to the other mixed double “teammate” on a needed result.  It isn’t often players ask questions that cause two NTDs to scratch their heads, but this one did.  Are they a “team”?  Is there a “coach” or a “captain”?  We decided that a conversation in front of the TDs limited to we need (either win or draw) to win X place in mixed doubles is permissible.  One always needs a bit of luck to win a tournament and Scott certainly had his luck.  But he can also play good chess.  His last round game is a nice attacking example. Daniel Yedidia tied for first with Harold Scott, but didn’t seem to cast nearly as many spells to earn his 4 ½ points! One of the many treats of the tournament was IM Dr. Danny Kopec’s lectures and analysis.  CCA tournaments often have one lecture and sometimes have analysis, but in this case it was abundant.  Kopec gave a lecture “So you want to be an expert” on Saturday and conduced an endgame lecture on Sunday.  He also analyzed games for several hours on both Saturday and Sunday.  This treat was well received and well attended by the players. Here is another treat from a first round upset.  Cristenel Leava exploits his opponent’s time pressure mistake.  WFM Aksita Gorti played 34. … Nxc3.  Find the move to convert the advantage. POSITION AFTER MOVE 34:   White to move; Show Solution
The game ended 35. Rxb6 Qd7  36 Qxd7 Rxd7  37. Rxf6 Ne2  38. Ra5 Nxd4  39.  Nxd5 Kb8  40. Rf4 1-0
Another treat of the tournament was the tournament directors put candy at all the boards on Saturday night.  One brave tournament director even dressed for the occasion. 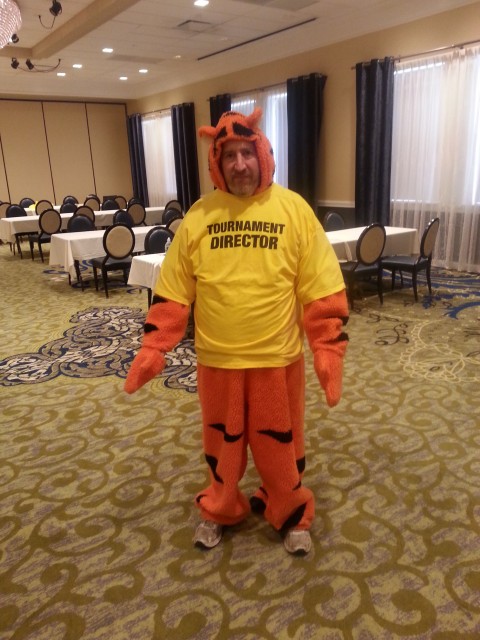 The Open section had 27 players, but was very strong with nearly half the tournament being over 2200.  Two GMs and two IMs led the field and were joined by nine other masters including two FMs.   The tournament was won by IM Nazi Paikidze, GM Sergey Kudrin and senior master Igor Sorkin.  All scored three wins and two draws playing virtually all the top players.  Paikidze played GMs Kudrin and Kovalev and IM Sarkar.  In the following game, she sacrifices an exchange and defeats the tournament’s top seed GM Vladislav Kovalev Nazi scored ½ tiebreak point more than Kudrin and earned the $100 bonus for best tiebreaks.  She started 3-0 and drew Kudrin quickly in round four and then had a hard fought draw versus Sarkar in round 5. Kudrin also started 3-0 including a round three win over Sarkar.  He then coasted into first playing a 12 move draw versus Paikidze in round four and a 10 move draw versus Sorkin in round 5.  Kudrin occupied board 1 for all five rounds.  The top seed played the two day schedule and drew before the schedules merged. Sorkin also drew two games.  He had black against the two GMs and drew both.  Here is Sorkins’s trick.  He defeats life master Nasir Akylbekov in 17 moves!  Akylbekov resigns, but the position is nearly equal!   The final position looks bad for black, but it is actually only slightly better for white.  Can you find the move that saves the game? Show Solution
18...c3! saves the queen and leads to balanced positions.
It is not often that a 2400 and a 2300 miss a move like this and resign an equal position.  Maybe the tournament room is haunted?! The fourth round pairings were also tricky.  The 2 ½ point scoregroup in the Under 2100 section had 7 players with 6 players were due black (after all this is a Halloween tournament!) The Under 1700 section had a clear winner.  Gerard Wasserbauer scored 4 ½ = ½ to win clear first and $1200.   The Under 1300 section ended in a four way tie for first.  Kyril Kavetsky, Aryan Jhaveri, Noah Xu, and James Tuzeneu all scored 4-1 and won $400.  It could have been a 5 way tie for first, but one of the last games to end finished in a draw.   Nasir Akylbekov won the blitz tournament with a perfect score of 8-0.  He won $90 for his efforts. As mentioned Harold Scott and Erika McLean won the mixed doubles prize with a combined score of 7.  The 2nd and 3rd place mixed doubles were won by IM Nazi Paikidze/Anshu Nunemunthala   and Saniya Savla/Nicolas Cardenas scored 6 points with each team winning $300. NTDs Steve Immitt and David Hater directed the tournament for Continental Chess.  Full tournaments results including more games can be found at www.boardwalkopen.com Finally, the last treat is a personal one.  I started the tournament as an active duty Army Colonel.  I ended the tournament as a retired Army Colonel and, at least for me, that is the biggest treat of all!  Now I can play and direct more chess tournaments!
SHARE:

Congratulations to the winners. But what's up with the new CCA uniforms?
"In round one, he was paired down. He reached a completely lost position but he tricked his opponent. He set up a stalemate trap and his Academy Award winning performance of “I hung my queen” got his opponent to bite." What are we to make of this?