Throwback Thursday: Game of the Century Goes Viral in November 1956

There once was a time when chess news was not delivered in a click. Great games did not instantly appear through a digital database and, instead, slowly prodded around the country and out into the chess world, as text on actual paper, only as fast as a postage stamp could take them.

Such was a time in November 1956. The stage was set in the Oct. 20, 1956 issue of Chess Life, published twice a month as a small eight-page newsletter, letting its readers know that the Lessing J. Rosenwald Trophy Tournament had begun at the Manhattan Chess Club. The third edition of the Rosenwald event, which would later become the official U.S. Chess Championship, had drawn an impressive field including such players as GM Samuel Reshevsky, reigning U.S. Champion Arthur Bisguier, an up-and-coming master Donald Byrne – and also, a one Bobby Fischer. 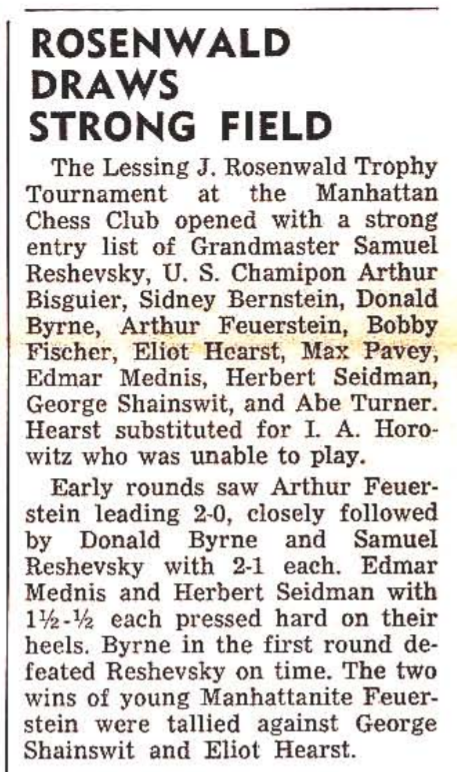 At this point in time, however, Bobby Fischer wasn’t yet that Bobby Fischer. Only 13 years old in November 1956, Fischer had won the U.S. Junior Championship three months earlier, earning an invitation to the Rosenwald as the first true test of his career – the first event pitting him against all established masters, all adults. Dr. Harold Sussman, a national master as well as Fischer’s dentist, later described the boy amongst men in the event:

Our National Junior Champion was intriguing to watch, especially when he was in trouble. He would squirm, bite his nails, look uncomfortable, fidget, and still would answer with a decisive air about him.

Fischer’s overall result in the Rosenwald wasn’t particularly noteworthy, perhaps expected from any youngster’s first crack at the upper echelon, winning just two games and drawing a handful more. By the time the next issue of Chess Life hit mailboxes on Nov. 5, the event had all-but concluded and Reshevsky had claimed his rightful headline after tearing through the field. Fischer’s 4.5/11 score for an eighth-place finish was little more than a mention.

But there – after the jump to page 2, scrolled down the third column, and past two other games – there it appeared. Under the simple descriptor of “Gruenfeld Defense,” the notation from a seventh-round whopper and the first-printed appearance of a game that would be analyzed and obsessed over by the chess world for 100 years.

The Game of the Century. 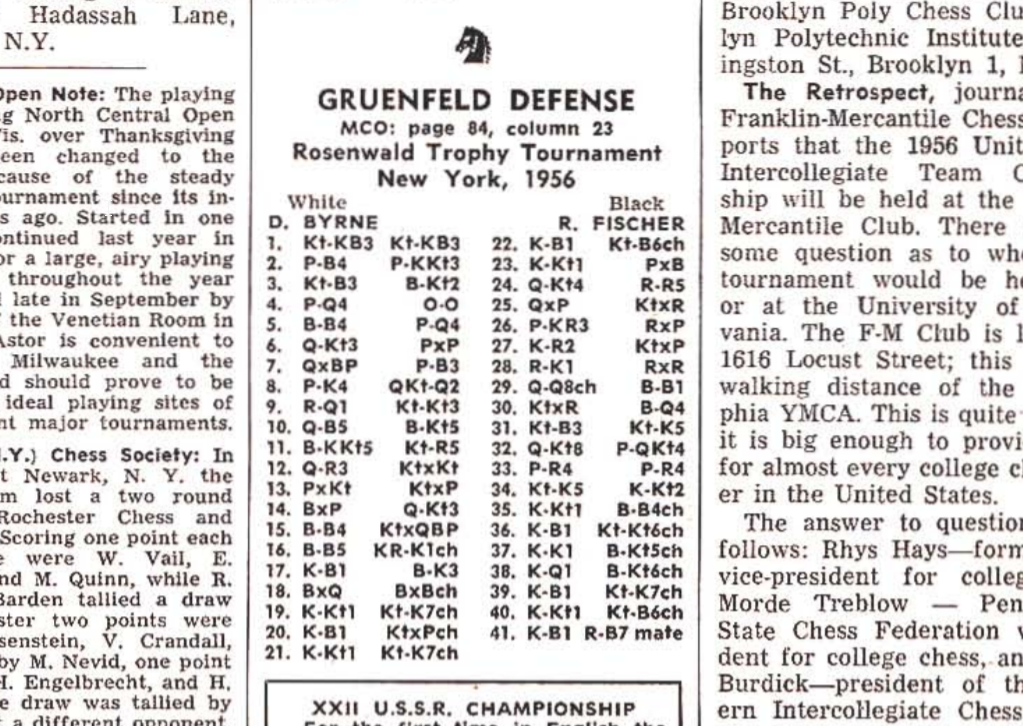 Image Caption
The Game of the Century as it first appeared in the November 1956 Chess Life.

Now viral, the game began to spread as fast as a 1956 postman could carry the news. Notoriety was confirmed in the subsequent Nov. 20 issue of Chess Life, indicating that Fischer had been awarded a special, top brilliancy prize in the Rosenwald “for his dashing victory over Donald Byrne as the most meritorious game in the tourney.” 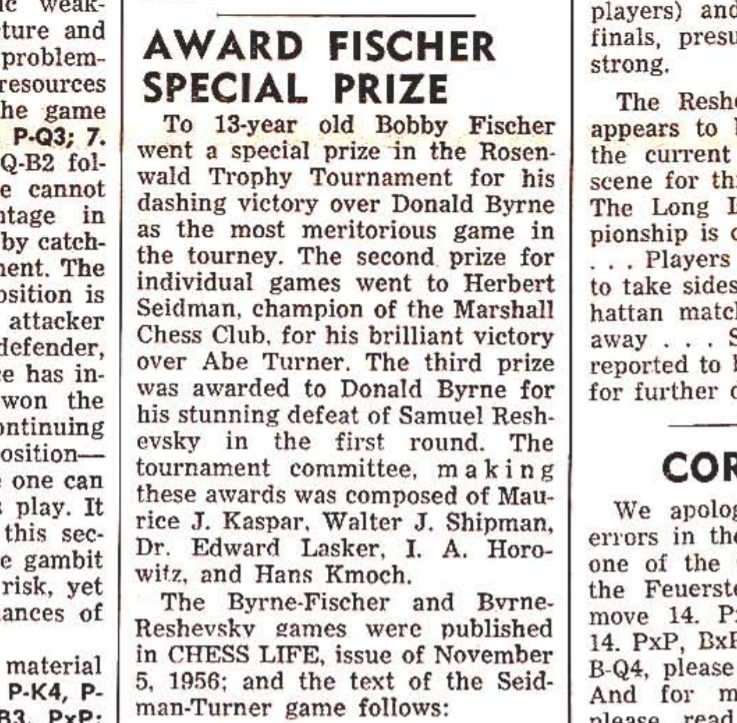 Image Caption
Chess Life mentioned Bobby Fischer winning a brilliancy prize in November 1956 for what would become known as the Game of the Century.

By December, the masters had seen and the adults had been talking. On Dec. 5, 1956, Chess Life published the first full-blown review of the third-annual Rosenwald event. The full-page report by Sussman went to length in describing the play and result of each participant, and came complete with pictures of Reshevsky and Byrne, both giving off similar aristocratic poses squeezing cigarettes with their hand in the air.

In his discussion of the surprising junior player, Sussman prognosticates:

The real sensation of the tourney was 13-year-old Bobby Fischer who clearly demonstrated that he is a full fledged master with a rather mature positional style! His win against Byrne was an inspired piece and fully deserved the 1st brilliancy prize. It is conceivable that Bobby will become one of America’s strongest masters in just a few years. He is expert at speed chess, knows his chess theory quite well, and has an almost uncanny fervor for our royal game. Watch him!

Indeed. Fischer’s meteoric rise would begin the following year, and Rosenwald tournament director Hans Kmoch made legendary the Byrne-Fischer Gruenfeld by dubbing it the “Game of the Century” on the December cover of the 1956 Chess Review. The cover photo of young Fischer, a surprising image given it was snapped during play, is said to show him pondering the position just before the game’s famous queen sacrifice. 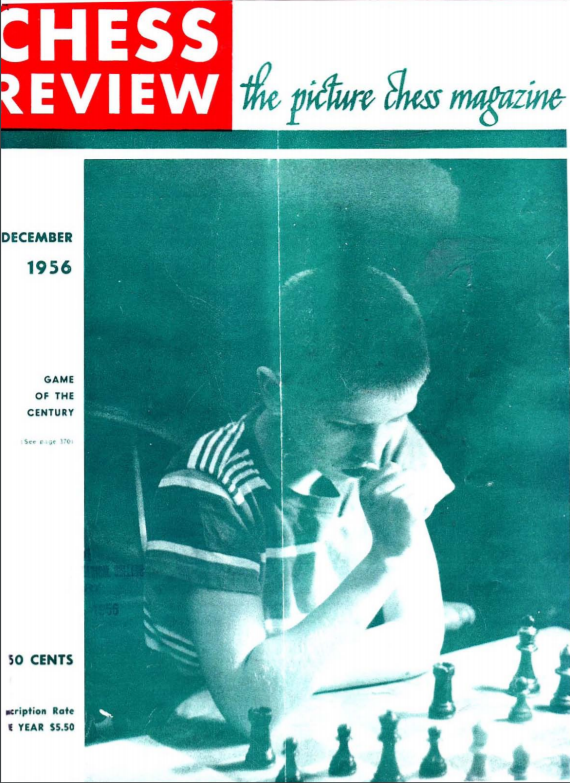 Image Caption
The December 1956 cover of Chess Review first coined the Game of the Century.

Kmoch’s description and analysis was a full realization of the notation presented to the chess world just a month earlier, describing it as “a stunning masterpiece of combination play performed by a boy of 13 against a formidable opponent, matches the finest on record in the history of chess prodigies.” He draws comparisons to such games from Paul Morphy at 13, Reshevsky at 11, and describes how Fischer’s play even bests Capablanca at age 12.

Compared to Sussman’s description of a fidgety young man, Kmoch sets forth a different description altogether of Fischer in the moment. Revealing that the boy had struggled through the Gruenfeld opening to a great expense of time, Kmoch says the game’s grandiose combinations were delivered in some 20 minutes, describing: “there he sat like a little Buddha, showing his moves with the calm regularity of an automaton.”

For what it's worth, I think…

For what it's worth, I think Fischer's first mention in a chess publication was only about one year earlier, in the November 1955 issue of Chess Review. A one-paragraph report on a tournament in New York City's Washington Square Park concludes, "The youngest player was 12 year old Bobby Fischer, who held his own against many of his older and more experienced opponents."

Amazing that less than a year passed between the first appearance of his name and his "Game of the Century."