The Marshall Chess Club set a new course for its annual Championship this year. Instead of the traditional 9-round Swiss, the 103rd Marshall Chess Club Closed Championship / Edward Lasker Memorial, held November 14-18, was a very strong 10-player round robin. The customary 9-round Swiss, i.e., the MCC Open Championship / Jerry Simon Memorial, will be held over two weekends in early December. Concurrent with the MCC Closed, the Marshall also hosted its “Marshall FIDE Round Robin IM Norm” event, which was also a very strong tournament, though not on the stratospheric levels of the MCC Closed.

Looking forward to the MCC Closed, IM Hans Niemann expressed some guarded confidence about his ability to make a GM  norm, although I thought that 6-3 would be an extremely tall order against this field. But even a loss to GM Djurabek Khamrakulov in round 1 did not dampen Niemann’s spirits, as he then reeled off 3 victories in a row, to join Khamrakulov in the lead at 3 points after four rounds. In his game against Canadian IM Raja Panjwani, Niemann showed his ability to cut through annoying complications and convert his Exchange-for-a-pawn material advantage into a win.

In round 5, GM Mark Paragua defeated GM  Irina Krush and thereby joined Khamrakulov and Niemann atop the leaderboard. In round 6, each of the three leaders won, creating an even more pronounced 3-way race for the Championship. They each now had 4.5/6, with Niemann needing 1.5 out of the last 3 rounds to earn a GM norm. 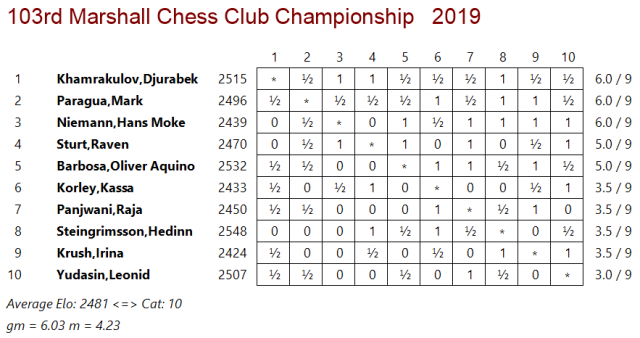 Ultimately, each of the 3 leaders finished with 6-3. Thus, Niemann made his coveted 2nd GM norm, and a blitz playoff ensued to determine a clear winner and the Marshall CC Champion. Khamrakulov took control of the first round of the playoff  by defeating both of his opponents, and he then proceeded  to clinch victory. Thus, Djurabek Khamrakulov was crowned the 2019 Champion of the Marshall. 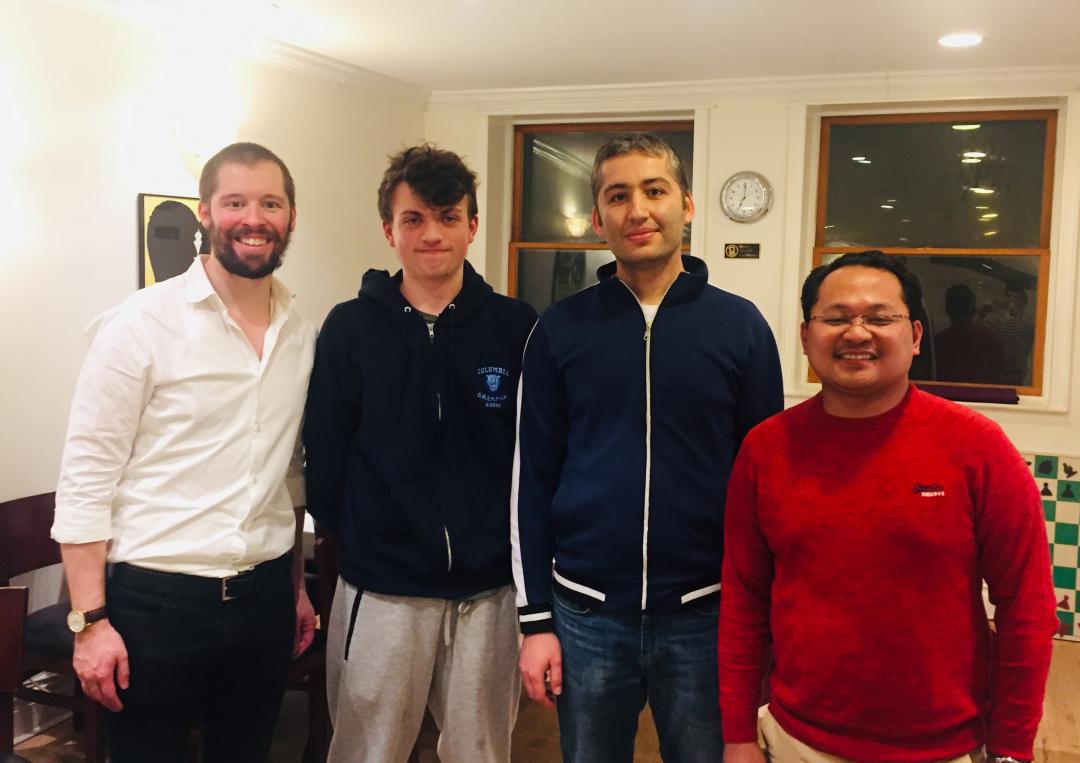 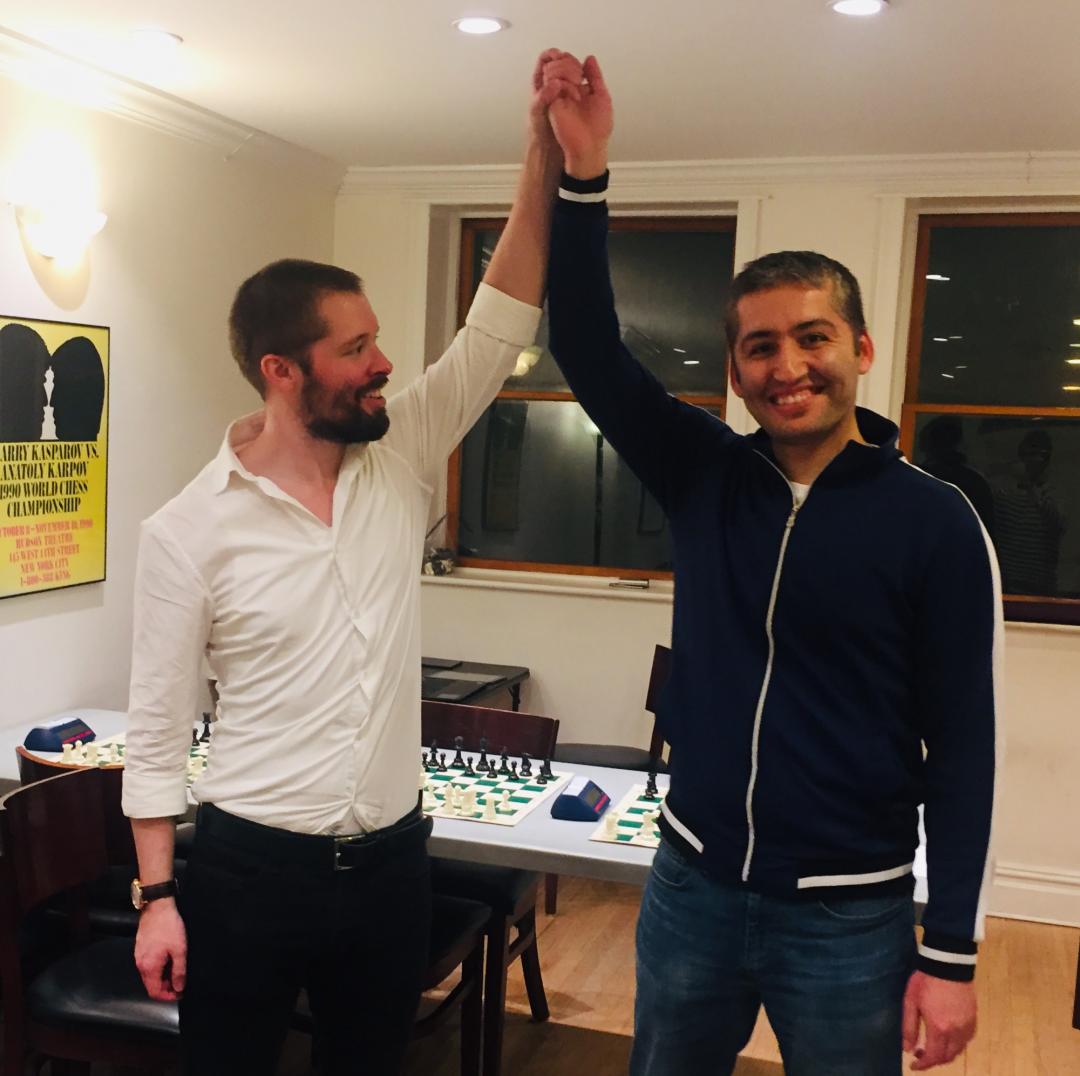 In the concurrent IM norm event, GM  Nikola Nestorovic won by a significant margin, leaving the rest of the field hovering near the 50% mark for most of the event. Thus, no player approached  norm contention. But Jason Liang started fantastically and after 4 rounds was tied for first with Nestorovic, both with 3.5 out of 4. My erratic play against Jason in round 4 helped him along in this effort. By round 8, Nestorovic had built a solid lead, and he continued to play enterprisingly. A case in point was his round 8 game against GM Sandro Pozo Vera.

In round 9, what became essentially the battle for second place occurred between Liran Zhou and Jason Liang. 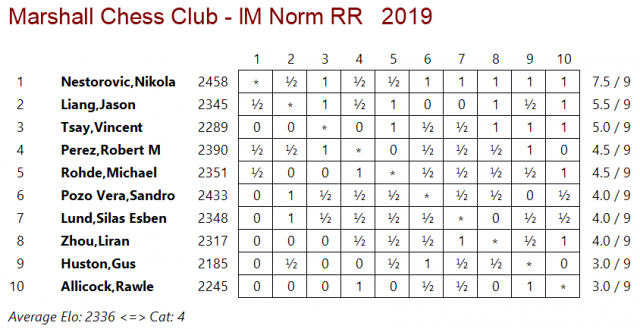