GM Magnus Carlsen won his first tournament in Wijk aan Zee in 2008, at the age of 17, tying for first with GM Levon Aronian. For such a young player to take top honors at one of the most grueling, competitive events was truly impressive. 15 years later, we might be witnessing another "statement performance," with Carlsen on the receiving end.

Uzbek GM Nodirbek Abdusattorov, who is only 18 years old, leads on a fabulous score of 6/8. Dutch GM Anish Giri and American GM Wesley So are both still in contention, trailing Abdusattorov by a full point.

Giri and Abdusattorov both won two of their first four games, but Giri has since cooled off, drawing all four of his games after the first rest day. 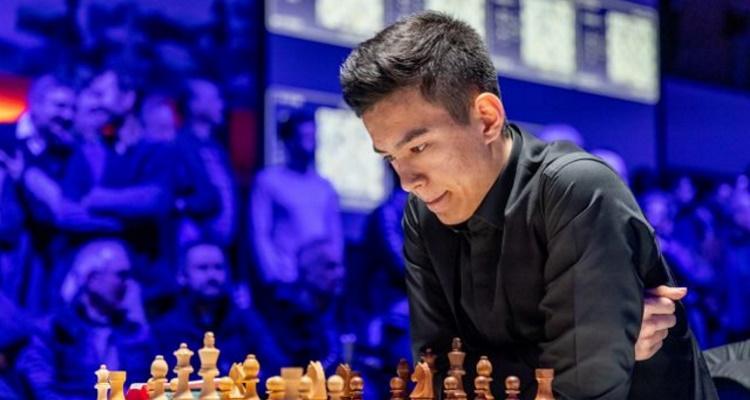 Abdusattorov has forged a different path. Drawing both of his games with the white pieces, he has built on his lead instead by defeating Magnus Carlsen with black in the fifth round and Indian GM Arjun Erigaisi again with black in the seventh.

After a slow start, So has caught up to Giri on 5/8 by firing off back-to-back wins against German GM Vincent Keymer and Indian GM Gukesh D in rounds six and seven. 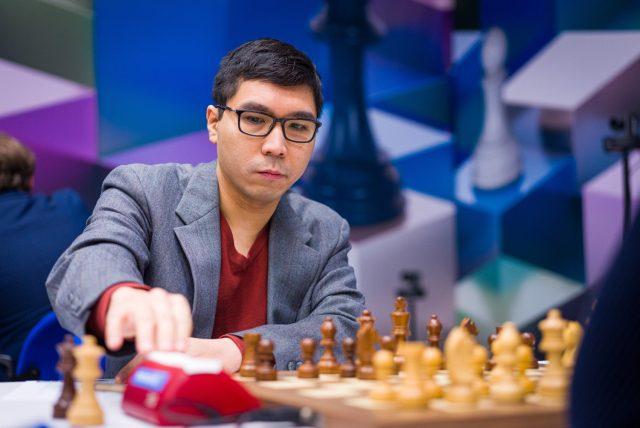 After losing consecutive games in the fourth and fifth rounds for the first time since Stavanger 2015, a notable sub-plot of the event has been whether Carlsen will recover. Known for his resilience, Carlsen indeed bounced back with consecutive victories in the seventh and eighth rounds. 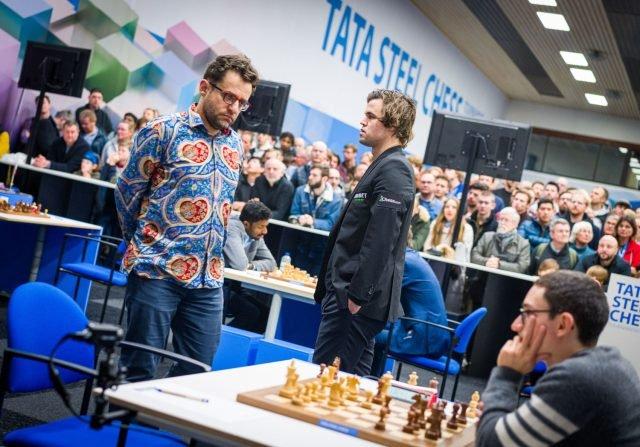 Image Caption
The 2008 co-champions reminisce on life before Abdusattorov, as Caruana thinks on his time (courtesy Lennart Ootes)

First, he defeated Romanian GM Richard Rapport on the white side of a “pet” line in the Petrov he debuted against Caruana in their world championship match.

Then, after a one-move blunder, he soundly defeated Caruana.

Carlsen now sits on 4½/8 along with Caruana, Indian GM Praggnanandhaa and Aronian. 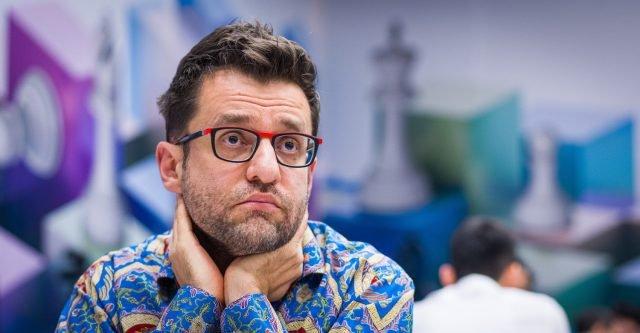 Aronian’s fifth round victory against Keymer showcased his creativity in the endgame. After electing to give his opponent the bishop pair as compensation for the pawn in a pure minor piece ending, Aronian continued to exert pressure until Keymer cracked.

Praggnanandhaa likely had the most frustrating end to the second leg of play, losing on time before executing his 40th move against Rapport.

That said, Rapport’s position was easily winning, and both players can be praised for gracefully handling the situation.

It seems Pragg thought he'd already made 40 moves, and that's why he just let his clock run out at the end. Rapport went to check with an arbiter: https://t.co/8FMrqLQbZ2 #TataSteelChess pic.twitter.com/mFLlkc9GQe

Play resumes January 24 at 7:15 a.m. CT and continues until January 29. Games can be followed live on Lichess.