Take it Outside: Fresh Air Chess Around the World 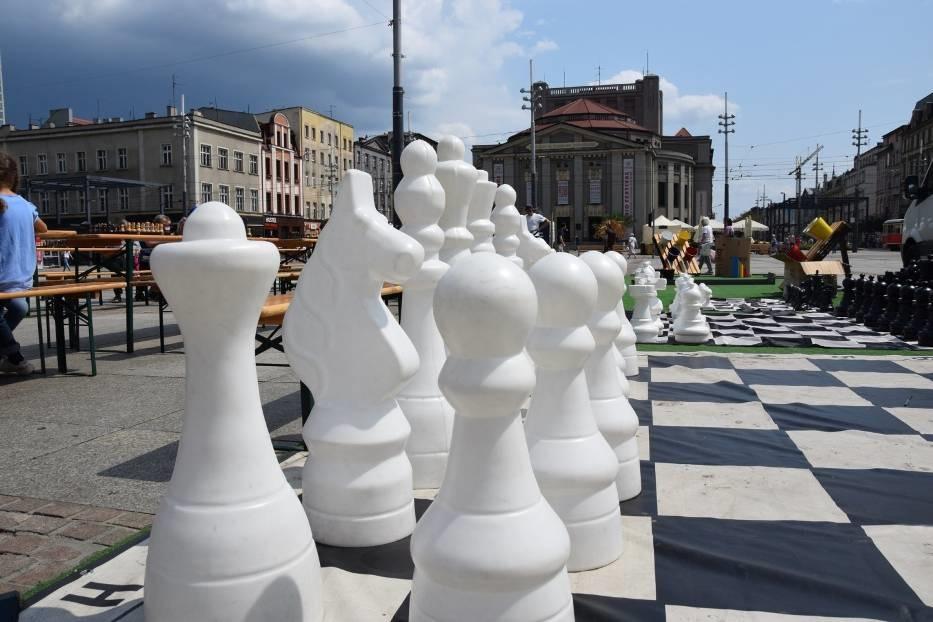 Playing chess outdoors is a centuries-old tradition with a 21st century internet presence. In the sixteenth century, Ruy López de Segura advised, “place the board so that the sun is in your opponent’s eyes.” Most outdoor games are casual and played quickly, however tournaments also happen outdoors, both abroad and in the U.S.

Outdoors, Around the World

In November 2018, Canadian Hans Jung started the Outdoor Chess Tables group on Facebook, beginning with 150 members and growing steadily through COVID-19 lockdowns to where it is currently over 660 members. Long before he established the group, Jung facilitated outdoor chess tables at Kitchener City Hall in Ontario, Canada. Jung noted, “Tables are dormant after the weather goes below 50 Fahrenheit.” 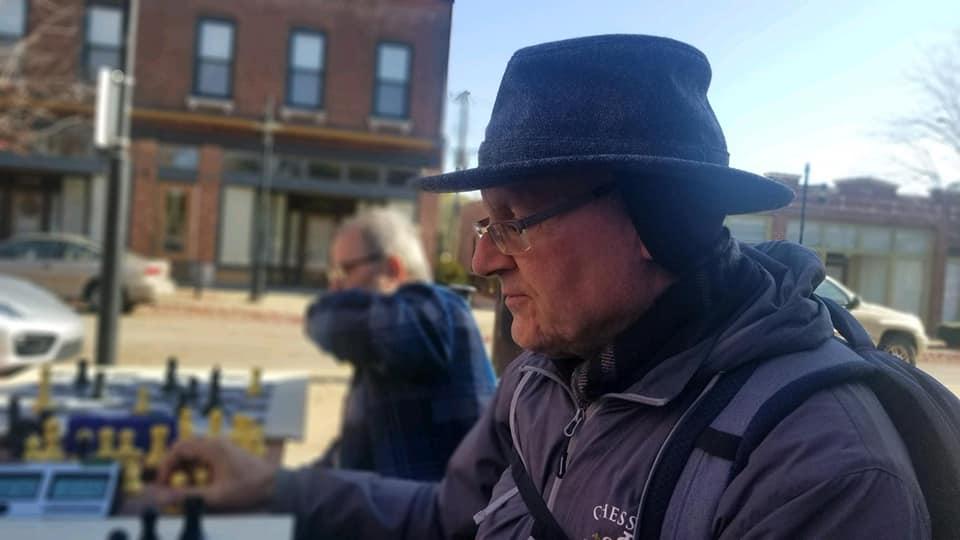 Another advocate for outdoor chess tables, Jesús Medina Molina, is also based outside the US. His website states, “Many Dutch municipalities have placed public chess tables in the open space.” In Vienna, Austria, Kineke Mulder has been offering chess outdoors since 2015 by setting up tables at the Human Rights Square. People of all backgrounds, many who do not speak the same languages, congregate to play chess outdoors. To learn more about Mulder’s Chess Unlimited initiative, visit her website.

FIDE Vice President Łukasz Turlej adds, “In Katowice, Poland, 1-2 weekends during each summer, we have five giant chess sets and outdoor chess tournaments for 30-40 players. Everything is being played at the Katowice market square.”

The Treme (pronounced trem-MAY) Chess Club is a US Chess affiliate, named after a neighborhood in New Orleans. Before the pandemic, Jeffrey Vollmer and others built outdoor chess tables in New Orleans, used for both casual and rated chess. Vollmer also ran outdoor tournaments in Wisconsin, including at the Lincoln Park Zoo in Manitowoc. Vollmer loves outdoor chess, saying “Chess kinda loses people when we are in stodgy tournament halls the whole time.” 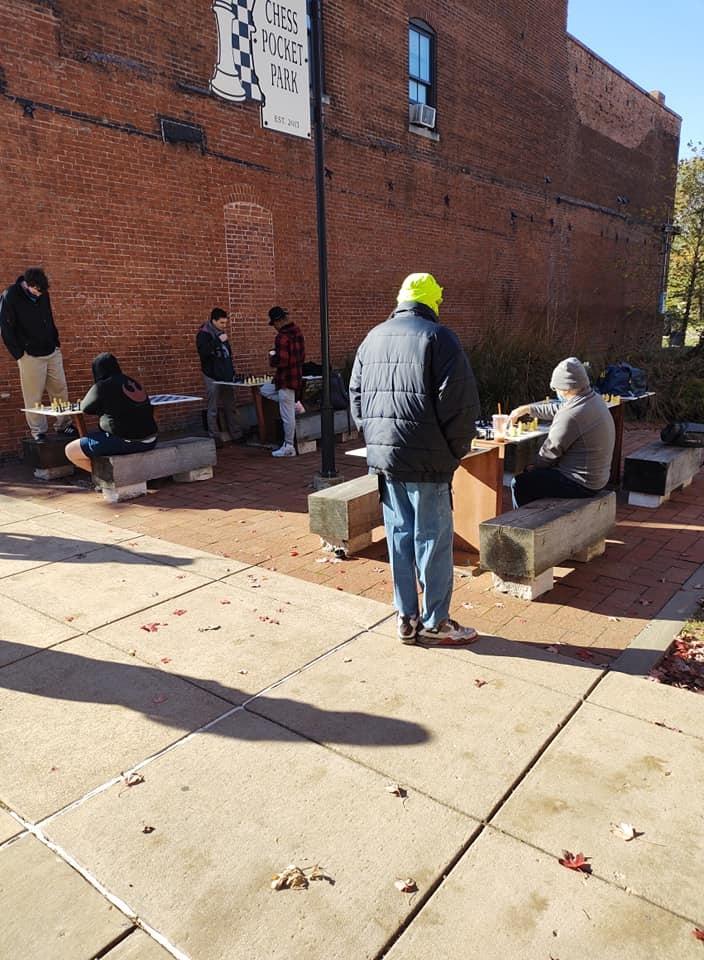 Image Caption
Players met for an outdoor US Chess rated event in Chess Pocket Park on Halloween this year.

“Before the pandemic, the Saturday tournaments would attract 8-10 players in a good week,” Vollmer said. “Now there are 10-15 players consistently. A little more than half take notation. But others don’t know how to keep score, including a couple of homeless players whose US Chess memberships I have fronted for years.”

Vollmer plans to form a 501c3 soon, to get more people in Old North St. Louis playing chess. “We are north of the Delmar Divide. There is a reluctance for people to come to our tournaments because of that stigma. But once they do come, I’ve found that suburban players and neighborhood locals become good friends. I live north of the Delmar Divide, walking distance to the park where the Saturday tournaments are held.”

On Thursdays, when the weather is above 50 degrees, Vollmer runs unrated outdoor tournaments that feature “live music while we are playing” at Hemingway’s Zen Garden, a restaurant and bar in O’Fallon, Illinois. Vollmer temperature checks each player before each tournament starts. Players wash their hands in between rounds. Masks are up to each player. 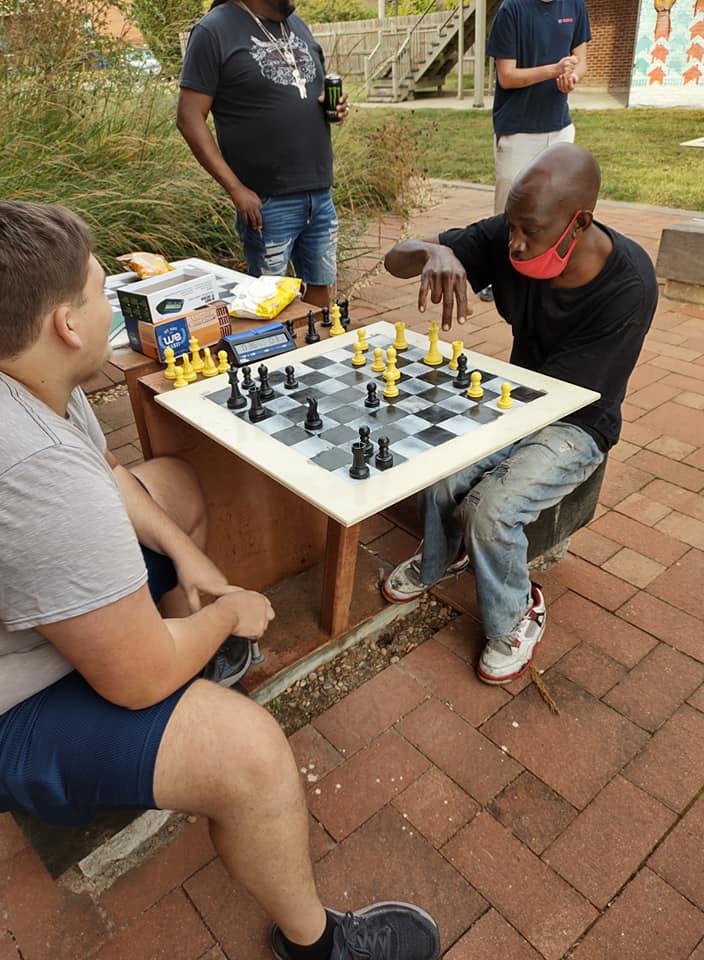 Check back on CLO soon for Part 2 of WIM Root’s series on outdoor chess.

Wonderful article; thank you Alexey! I've been wanting to play in the outdoor tournament in St. Louis, but I just haven't made the time yet to do so. I certainly looks like a unique experience!