So, Carlsen Set for Saturday Race

American GM Wesley So is poised for a photo finish with World Champion GM Magnus Carlsen on Saturday afternoon.

As the Saint Louis Rapid and Blitz online blockbuster enters its final day of play, the pair of super-GMs appear to have run away with the lead: Carlsen holds just a half-point edge over So, though the two have sprinted way out in front of the pack, leading Russian GM Ian Nepomniachtchi in third place by a commanding three-point cushion.

Saturday’s games, beginning at 1:00 p.m. Central, mark the second and final day of Blitz chess (G/5+3) in the five-day event put on by the Saint Louis Chess Club. The tournament collected ten of the world’s elite, including So and the World Champion, and several more U.S. stars in GMs Hikaru Nakamura, Leinier Dominguez and Jeffrey Xiong; and has run the players through two round-robin matchups of both Rapid (G/25+5) and Blitz games. Saturday’s final cycle of Blitz will decide shares from the $250,000 total prize fund, with first place netting $50,000.

Carlsen and So are paired in today’s third round, scheduled for 1:50 p.m. according to the SLCC. 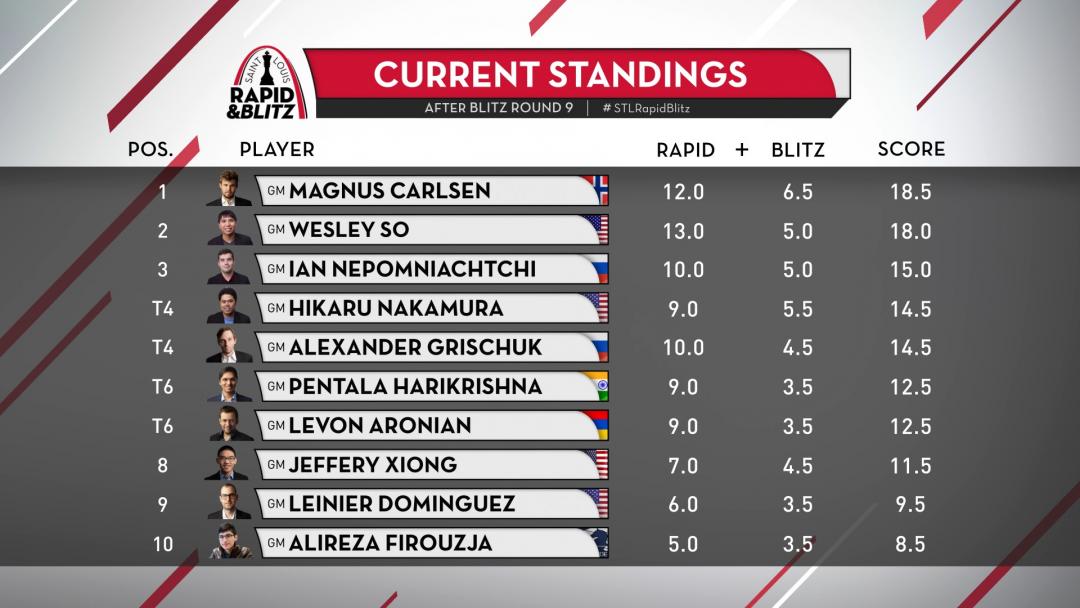 So had stayed undefeated and held sole possession of first after the tournament’s first three days, which featured nine Rapid games worth two-points each in the standings. The unbeaten streak came to an end in the first round of Friday blitz, however, at the hands of fellow statesmen Xiong. It stands as So’s only defeat of the tournament; he went on to score 5/9 for the day.

While So’s play for much of the tournament has been calm and quiet, including six draws on Friday, Carlsen put on a fireworks show in the first day of blitz. Flamboyant, exciting chess, rife with rich and often dangerous positions led to a decisive day for the world champion: He finished with Friday’s best 6.5/9, and only one draw coming in the final round.

While the score speaks for itself, Carlsen’s day was anything but easy. In round 5, he seemed to struggle through Nepomniachtchi surprise 1. b3! game, finally finding equality just moments before slipping to a neat rook-and-knight combination by the Russian. And while Carlsen closed the day 2.5/3, both wins were nothing short of swindled: 17-year-old phenom GM Alireza Firouzja had the Norway GM dead-to-rights before nerves appeared to overtake the youngster, and Dominguez fought back from near early death only to overlook a winning shot that would have netted him an extra piece in the endgame.

Early pawn action by Dominquez led to questionable safety for the black king, castling nearly naked on the kingside and inviting early pressure by Carlsen. 27. Qg6+ seemed to sound the drum, but Dominguez defended admirably, as Carlsen couldn’t seem to find his way through black’s rooks and bishop pair. Carlsen lost tempo with 35. Qg5, leading to a quick liquidation. The game appeared to be winding down to a draw, until Carlsen blundered in time trouble with 43. Re2 -- though Dominquez missed the mistake, overlooking 43. … Rf8 which would have won white’s bishop. The world champion went on to squeeze blood from stone in a bishop-and-pawn endgame.

The final day of the Saint Louis Rapid and Blitz begins Saturday at 1:00 p.m. Viewers can watch the games along with expert commentary by GMs Yasser Seirawan and Maurice Ashley, along with WGM Jennifer Shahade on uschesschamps.com or on the Saint Louis Chess Club’s YouTube and TwitchTV channels.