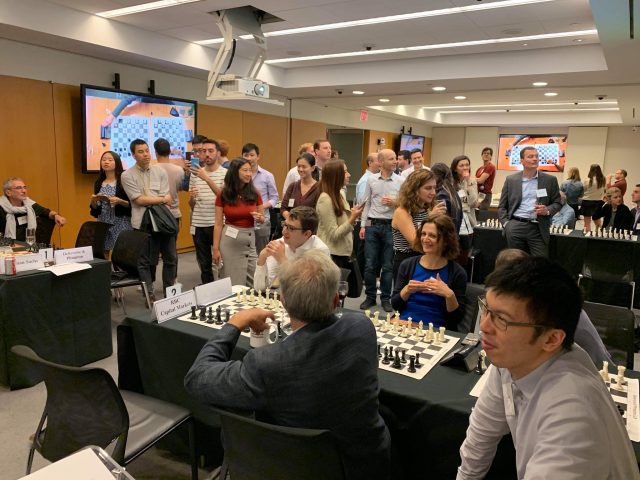 The 2019 fall season of the NYCCL is once again hosted at the offices of Debevoise & Plimpton, LLP. NYCCL co-founder, co-organizer, and Debevoise team captain FM Alisa Melekhina recaps the halfway report. The NYC Corporate Chess League involves three-player teams from banks, firms, and corporations across New York City. The teams play six double-matches of G/10 + 3’ over the course of two months, vying for the title of NYC Corporate Chess leader. The inaugural 2018 season concluded with Deutsche Bank securing a perfect 6/6 score for a first-place finish. Building off of the successful draw among teams, players, and spectators in 2018, the second season is officially underway. The core line-up once again features teams from: Bank of America Merrill Lynch, Debevoise & Plimpton, Deutsche Bank, Goldman Sachs, Google, JPMorgan Chase, RBC Capital Markets and Two Sigma. "We are delighted to welcome back the teams for another installment of friendly competition to determine the city’s next corporate chess leader," says Debevoise partner Gregory J. Lyons, leader of the law firm's Banking Industry Group and member of the firm's Financial Institutions Group. “We look forward to building off the success of the first season in establishing a thriving corporate chess community in New York.” This year, however, defending champion Deutsche Bank is only the second seed. Since last year, Goldman’s team has a new board 1 in the form of IM Zhe Quan. Close behind on board 2 is IM Bogdan Vioreanu, with board three rounded off with a selection of strong experts. 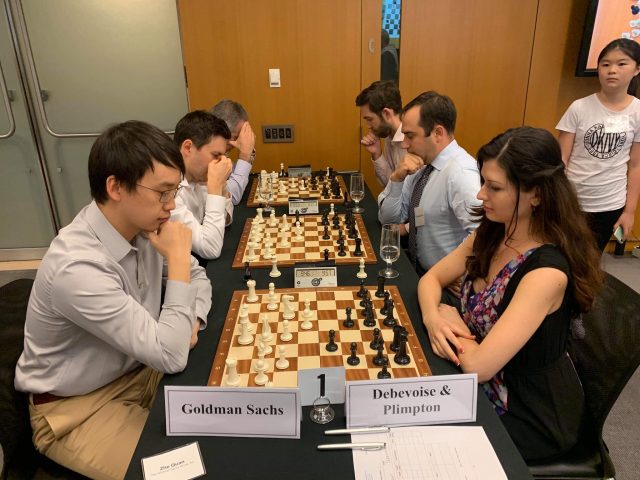 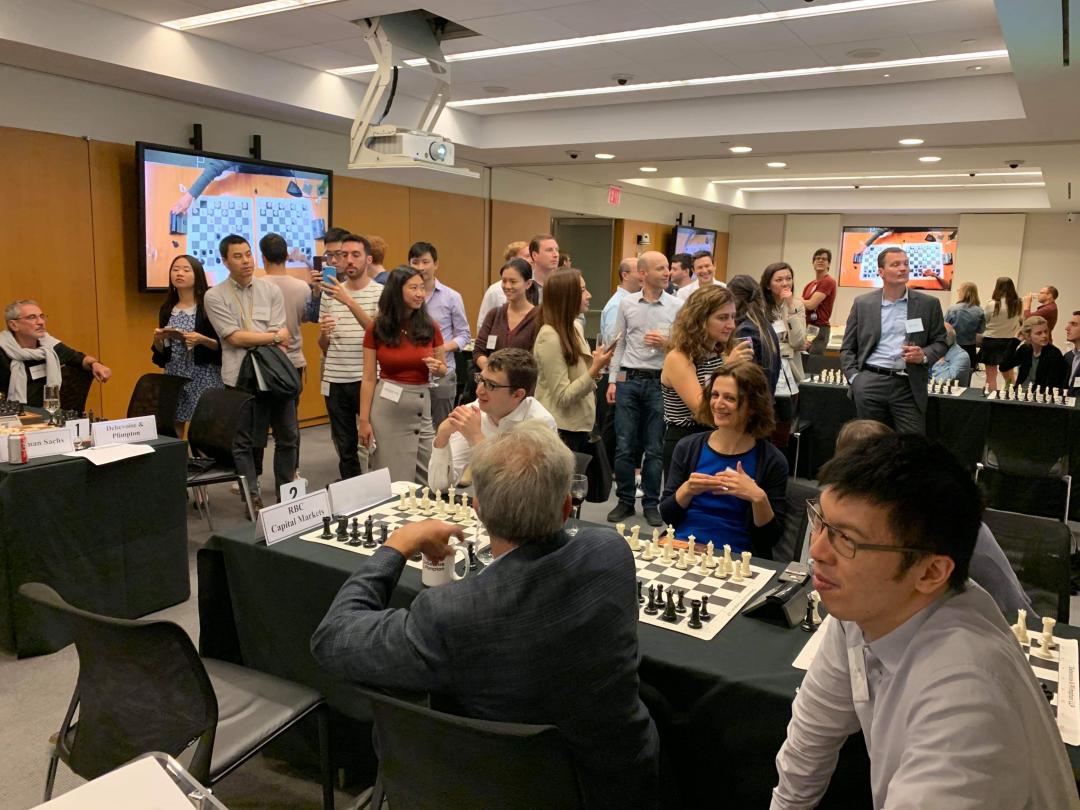 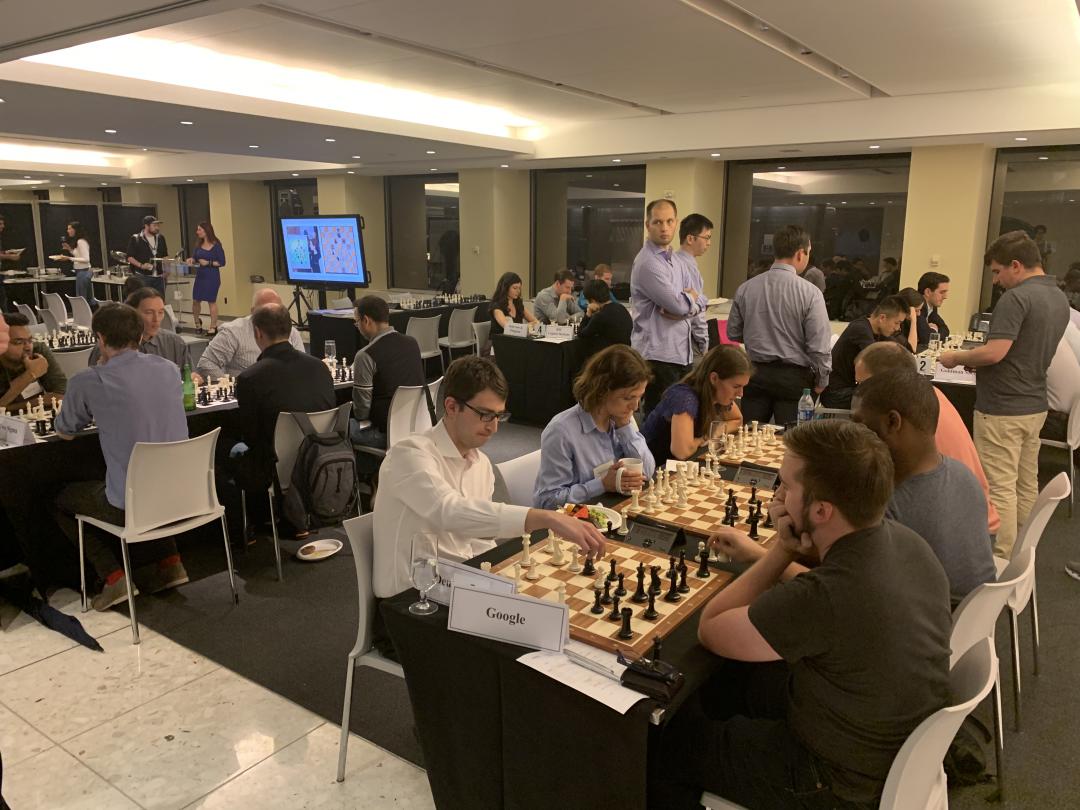 The highest-ranked player in the league, however, hails from Bank of America Merrill Lynch: IM Victor Shen. 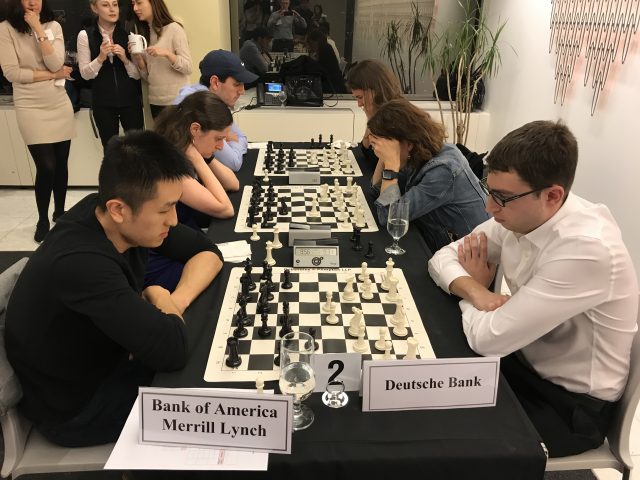 IM Victor Shen on board 1 in match 2 against Deustche Bank. BAML’s board 2 is co-team captain Anna Ginzburg, a familiar face in the NYC chess scene.

“The NYCCL was created as an outlet for top chess players and enthusiasts alike to combine their chess experience with their new work environment,” notes FM Alisa Melekhina, who is currently a sixth-year litigation associate attorney at Debevoise and an internationally-ranked master and World Team Chess Championship gold medalist.  “As a league founded by three female chess players, we’re proud to boast a diverse line-up of players and spectators across a range of roles and experiences.” 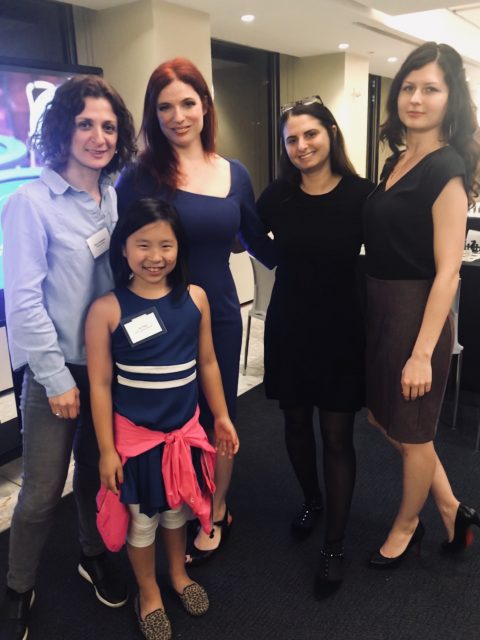 The ladies of the league. Pictured from left to right during match 2: IM Rusa Goletiani, WGM Jennifer Shahade, and NYCCL founders & organizers Alexandra Wiener and FM Alisa Melekhina. Dropping in is the daughter of one of the RBC players.

Four of the eight team captains are women, and players span the roles of software engineers, traders, lawyers, and banking VPs and executives, among others. Two of those team captains are the NYCCL co-founders and organizers, FM Alisa Melekhina and Alexandra Wiener. “It’s a pleasure to be back both in an organizer and team captain capacity for the second NYCCL season, which has already reached new milestones in terms of attendance and programming. The strength of the teams is increasing, as is spectator interest —two-fold goals of the league which we are proud to be surpassing,” comments Wiener, an Analyst at Goldman Sachs. Indeed, this season of the NYCCL has already featured a series of engaging presentations from prominent faces in the chess world. GM Mac Molner kicked off the season with a Grandmaster Blindfold exhibition match. Molner faced two brave volunteers from the competing teams, and ultimately won both of his games. 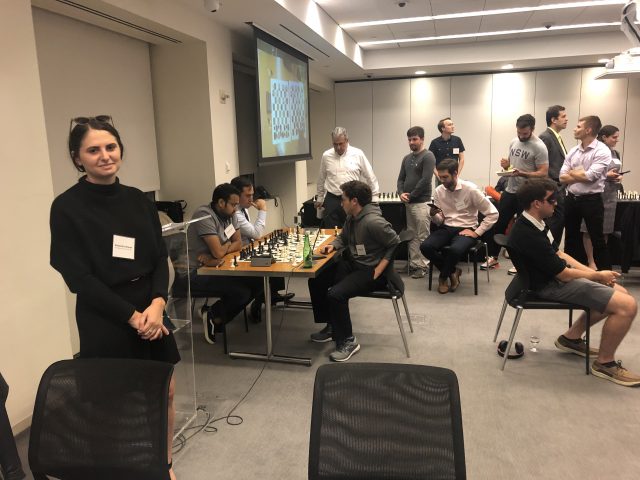 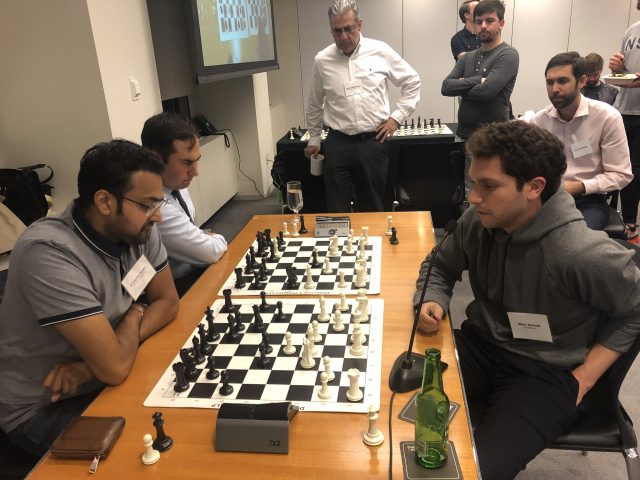 GM Marc Arnold moderated the simul and kindly resumed his duties this year as guest arbiter for a few matches.

The second match hosted an exclusive presentation from US Chess Woman’s Program Director WGM Jennifer Shahade on the emerging overlap between chess and poker. 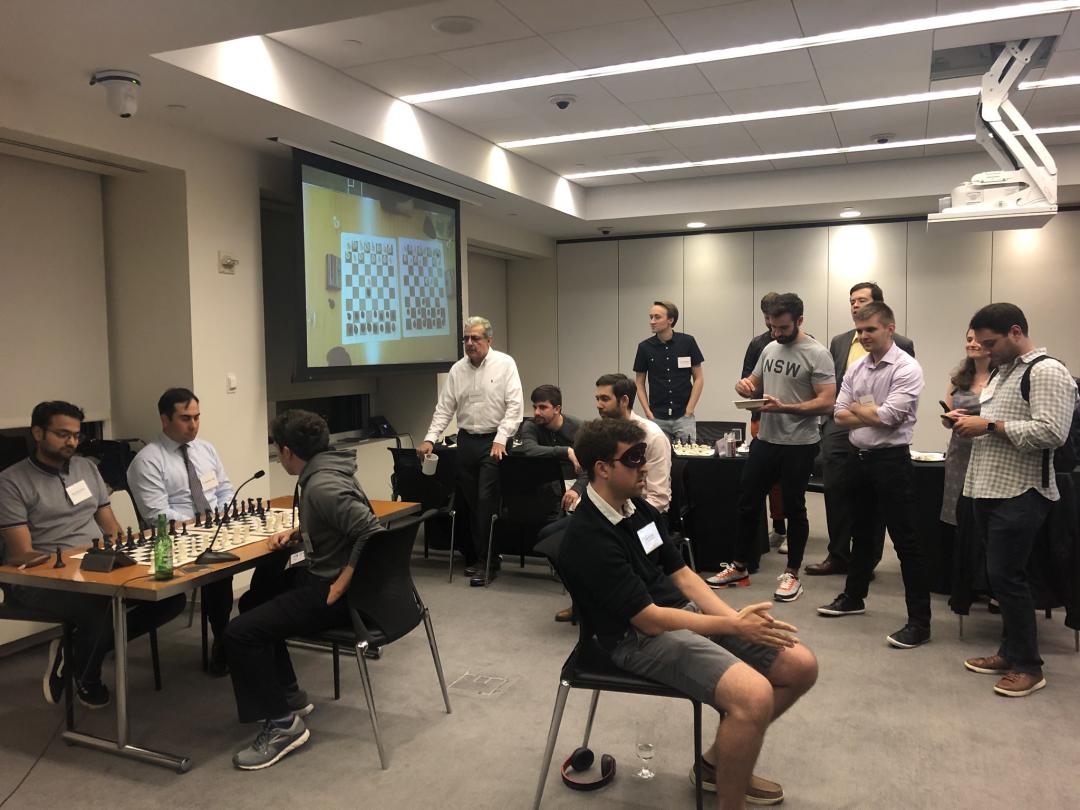 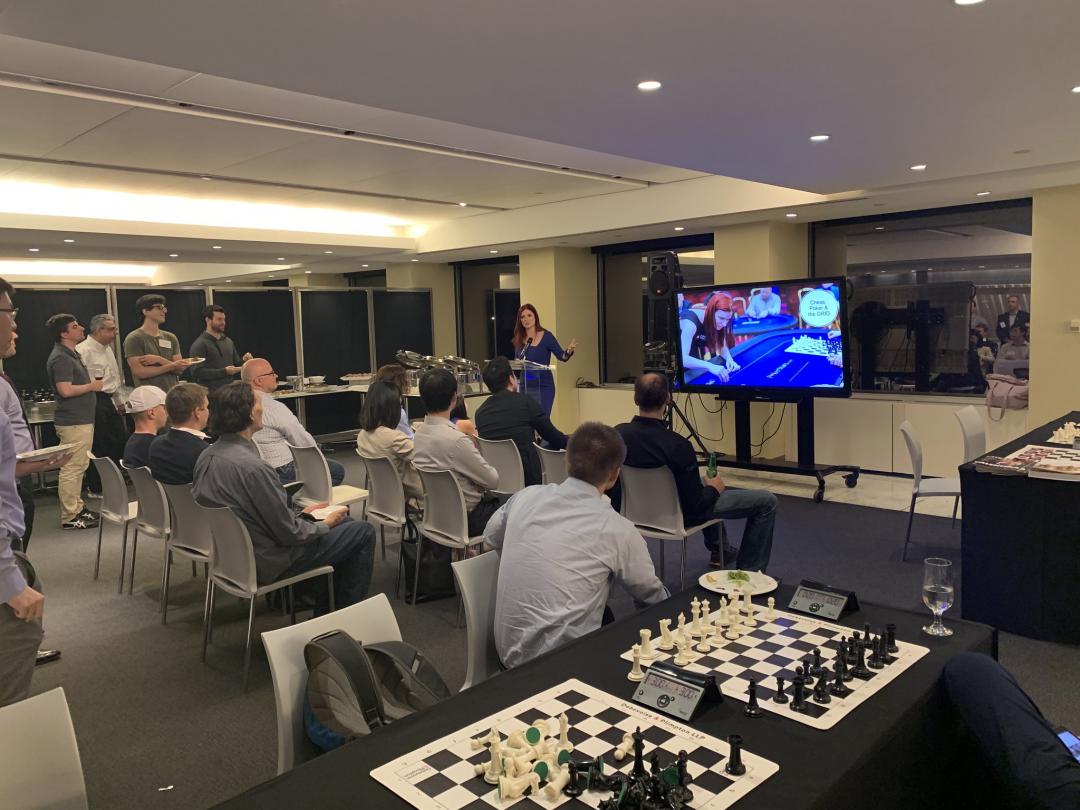 Match 3 featured, by popular demand, a beginner workshop led by FM Alisa Melekhina who covered a classical game by Alekhine on the theme of “playing with purpose.” 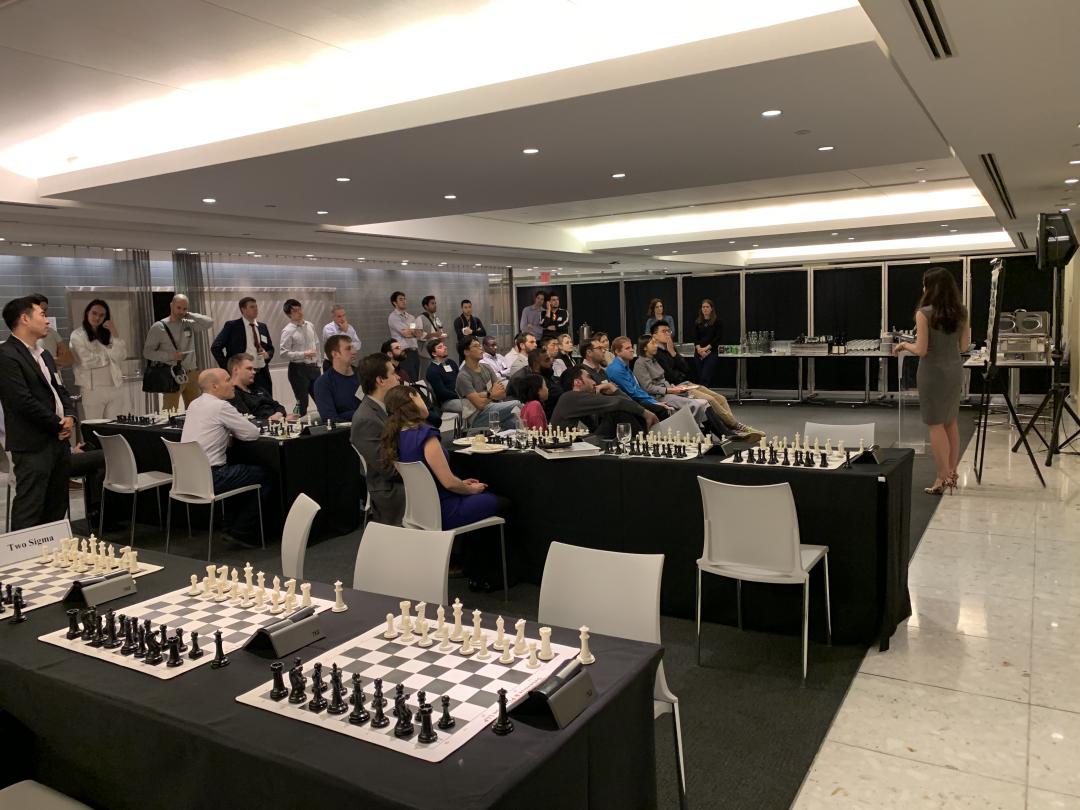 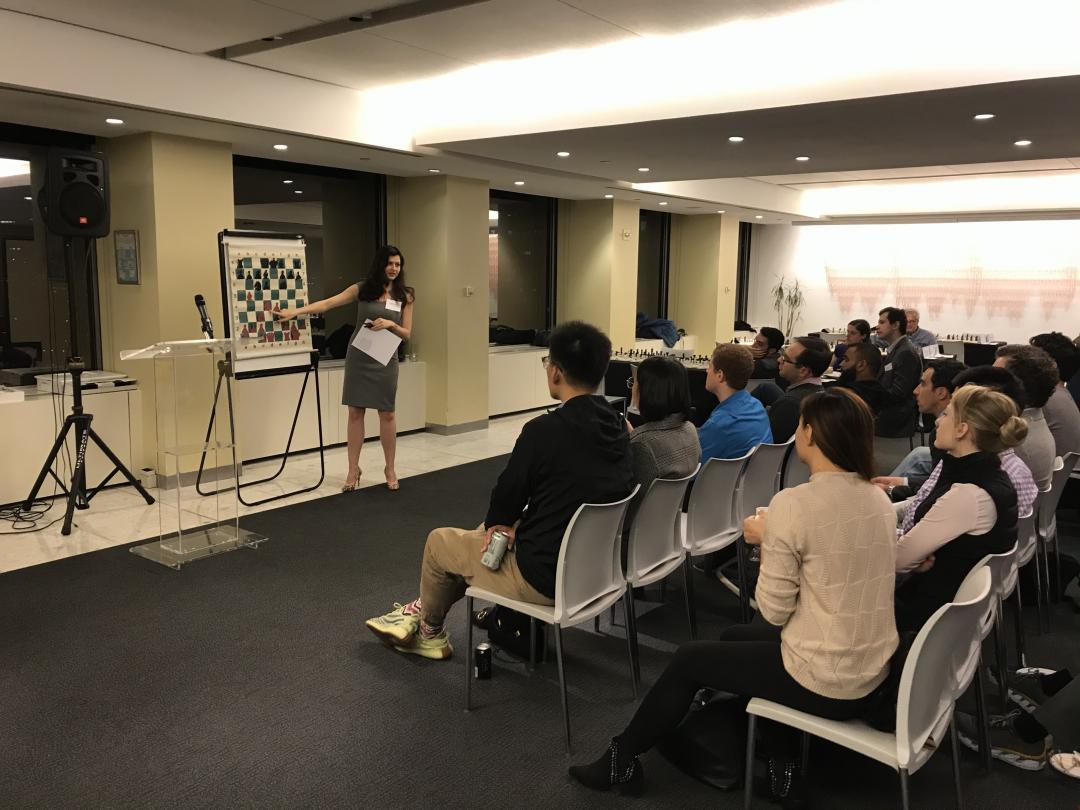 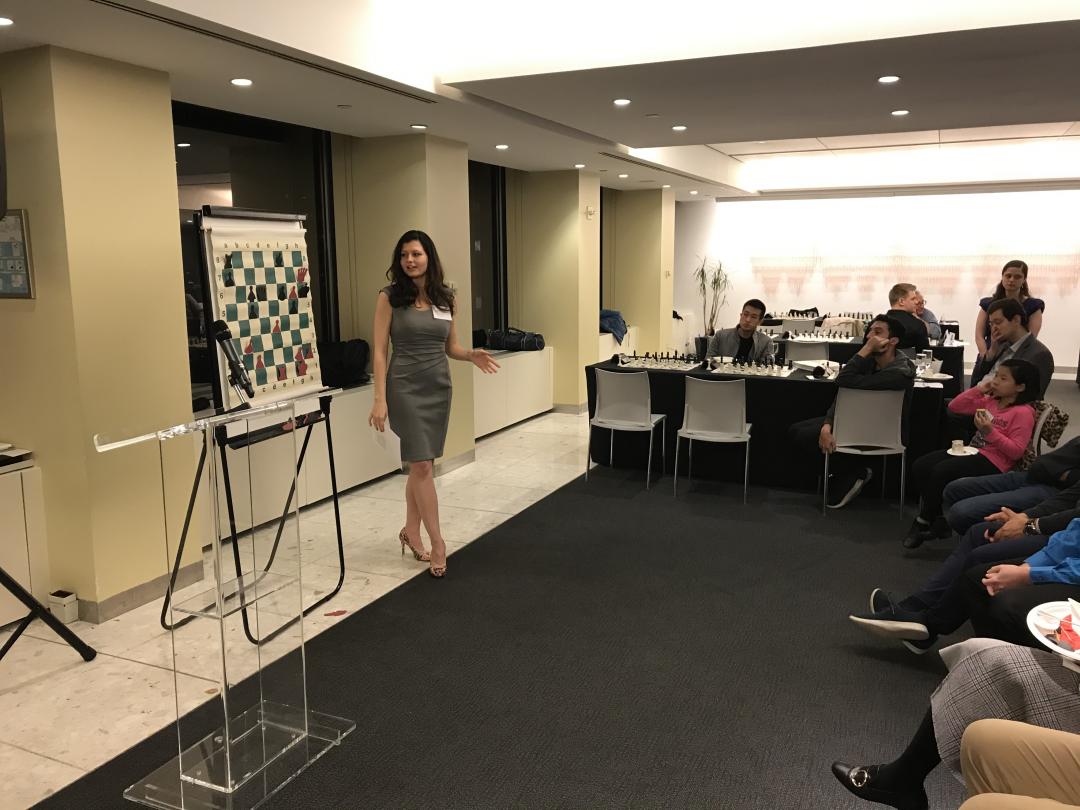 The strong selection of titled players and solid masters and experts rounding off teams, makes this season especially competitive. After the halfway point, Goldman Sachs leads as the only team with 3/3 points. Three teams are tied for second place: Deutsche Bank, Google, and Debevoise. The matches will continue on a bi-weekly Thursday schedule, culminating with the closing ceremony and a tandem team exhibition match at the finale on Thursday, November 21. The NYCCL is made possible due to the top-notch work from Debevoise’s marketing, conference services, building security, and catering staffs. The Debevoise chess team line-up for the 2019 season includes: FM Alisa Melekhina, David Rock, Aleksei (“Alex”) Romanovski, P. Sebastian Ruiz, Ben Lee Friedman, and Saul Dingfelder. About the New York City Corporate Chess League The NYCCL brings together chess players employed at various firms and corporations with offices in New York City.  The league is comprised of three-player teams; each player engages in a double match of G/10 + 3’ (once with white and black) during a single match. The season typically includes six total matches spanning two months.  Games are not rated, although players’ reported USCF and/or FIDE ratings are used for pairing purposes. All players participate in their personal capacity, and must all be employed by the same private entity to form a team. Membership and attendance is free, but is currently by invitation only. Debevoise & Plimpton LLP is the host of the 2018 and 2019 seasons. For more information, contact amelekhina@debevoise.com and alexandra.wiener@gs.com. *FM Alisa Melekhina is a long-time competitor in US open tournaments and women’s national and world team invitational events. She graduated from the University of Pennsylvania Law school in May 2014 and is currently practicing as a corporate litigation attorney in NYC. She previously wrote a popular CLO article on Balancing Law School and Chess.