“He was a national master? Wow!” Unrated chess player Stephen Huang attends the University of Pacific in Stockton, California. “I joined US Chess on Wednesday,” he said. But on Thursday, in the first round of the 65th Pan-American Intercollegiate Team Chess Championship, he defeated a 2227 opponent, whose impressive ranking seemed to be news to him after the game. 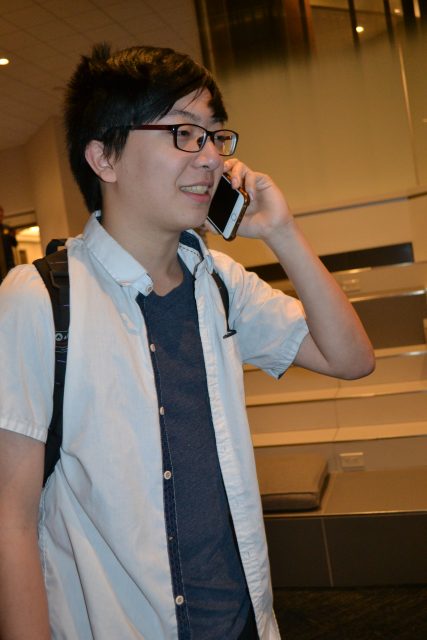 Stephen Huang has something to phone friends about. Photo Al Lawrence
PanAms Organizer Judit Sztaray, herself affiliated with the U. of Pacific, stood beaming nearby, while the very smooth-running initial round of the first-ever Pan-American Intercollegiate Championship held in San Francisco was transcribed into chess history. The six-round, four-day PanAms have been held every year without fail since 1946. But Judit, Executive Director of Bay Area Chess, was first to bring the big college championship to the Bay. Such accomplishments are not new to her—US Chess named Bay Area Chess as 2018 Club of the Year and honored Judit’s hard work and efficiency by recognizing her as 2017 Organizer of the Year. At the opening event following a reception for all the players, Judit dedicated the 2018 PanAms to former US Chess president WIM Ruth Haring of Chico, California, who recently passed away at a young age. “Ruth was the most patient, kind and encouraging mentor a person could have.” Big tournament, big brains Only twice before has the PanAms been held on the West Coast. In 1964 and 1979, the event came to Los Angeles. This year’s event broke the California record with room to spare, attracting 53 teams and 230 players. Big-brain students from big-name East- and West-Coast schools like Harvard, MIT, Princeton, UCLA and Berkeley are here with their four-player teams. They’re accustomed to being the brightest lights in most every room, but in the spacious playing hall this year, they begin as big chess underdogs. The top five schools in chess now come from Texas and Missouri, fueled by recruiting with full-time scholarships. Those five universities fielded the top eight teams in San Francisco—ranging from a four-board US Chess average rating of 2737 (Webster University-A) to 2513 (St. Louis University-B). Besides Webster and SLU, University of Texas-Rio Grande Valley, Texas Tech University, and University of Texas-Dallas complete the top five. Those five, plus a number of hopeful dark horses, are gunning to finish in the Final Four and move on to the US college playoff championship, scheduled for New York City’s Marshall Chess Club in April. Here's a victory from Webster's "A" team board one Illia Nyzhnyk, who is rated well over 2700. What a tournament! In this game he plays against Arizona State U-A's board one. 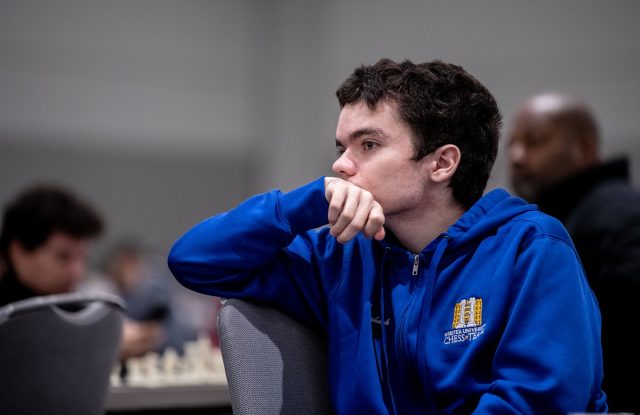 Illia Nyzhnyk, Photo David Llada for Bay Area Chess
Eight players rate over 2700, and 21 come in at over 2600. But it’s a mistake to think it’s all about the top. All 53 teams and 230 players can chase many division and individual titles—a potentially big boost to their school programs. Team ratings go down to just above 1000 and unrated. It’s a Swiss—every team plays all six rounds and faces teams close to its score group every round. So matches quickly become competitive. And, in case you’re wondering, every entrant, from GM to unrated, is a legitimate college student who must meet, among other prerequisites, the required course load and GPA. Every year, a subcommittee of the USCF College Chess Committee examines university documentation to verify each player’s eligibility. The championship is “Pan-American” because universities and colleges from North, South and Central America, as well as the Caribbean, are eligible to enter as many teams as they can muster. The event is international again this year, with teams from Canada and Mexico. Amazon Primed Many teams that don’t enjoy chess scholarships still get travel expenses from their student activity funds. One team, the University of Washington, won a trip sponsored by Amazon.com by winning a qualifying event. In the first round, they defeated Northwest University, represented on its first two boards by Expert Benjamin Mukumbya and WCM Phiona Mutesi, of Queen of Katwe fame. https://twitter.com/davidllada/status/1078743768973463552 Among many other notables playing outside of the stanchions roping off the very top teams is GM Parimarjan of India, who became the fourth-youngest grandmaster in history (GM Sergey Karajkin still holds the record) at the age of 13 year, four months and 20 days. He’s now a grad student at MIT, holding down its top board. https://twitter.com/IMCryptochess/status/1078422194013667330 Texas Tech Head Coach GM Alex Onischuk, a US Chess Hall of Famer and former US Champ, was himself a former college champ. “It’s a great idea to rotate this event to new places. San Francisco is an attractive venue. Coming here in the winter is a lot of fun.” He’s pleased with this year’s organization. “Everything—the hotel, the tournament—is first rate.” His squads are scholarship students, but he applauds the many teams that have organized the trip on their own. “We’ll grow by attracting more of them.” Here's one of the more entertaining wins from the first round on board four, table two, featuring a battle of the Nicks. Thedorou is an International Master from Greece who is currently attending SLU, while his opponent is a member of the Florida International University. Look for more CLO reportage by Al Lawrence as the event heats up, and follow @USChess on twitter for takeovers by Vanessa Sun and BayAreaChess for photos by David Llada. https://twitter.com/bayareachess/status/1078707226708078593 Pan-American Chess Quick Links:  Website Pairings Link  Twitter hashtag #PanAmChess Live Game Link  Official Twitter with Photos by David Llada
SHARE: