The Saint Louis Arch Bishops fell short of their quest to become the Professional Rapid Online Chess League’s first back-to-back champion, after losing to the Armenia Eagles in the 2020 finals last Sunday.

The U.S. super-squad, featuring world-beater GMs Fabiano Caruana and Wesley So along with rising stars Leinier Dominguez and Jeffrey Xiong, had entered as favorites to win another crown in the global PRO Chess League, and went about as far as possible before missing their goal. Meeting in the final match as the only teams left undefeated through 2020, Saint Louis and Armenia played through Sunday to enter the fourth and final round in a 6-6 tie.

But there the Arch Bishops stumbled, with all three top-board Americans losing their final game of the season, and only Jeffrey Xiong salvaging a draw. Armenia won its second PRO League championship and its top $20,000 prize with a final match score of 9.5-6.5, while the Arch Bishops settled for $10,000. The two teams remain the only champions the PRO League has seen, having traded the title back-and-forth through four seasons. 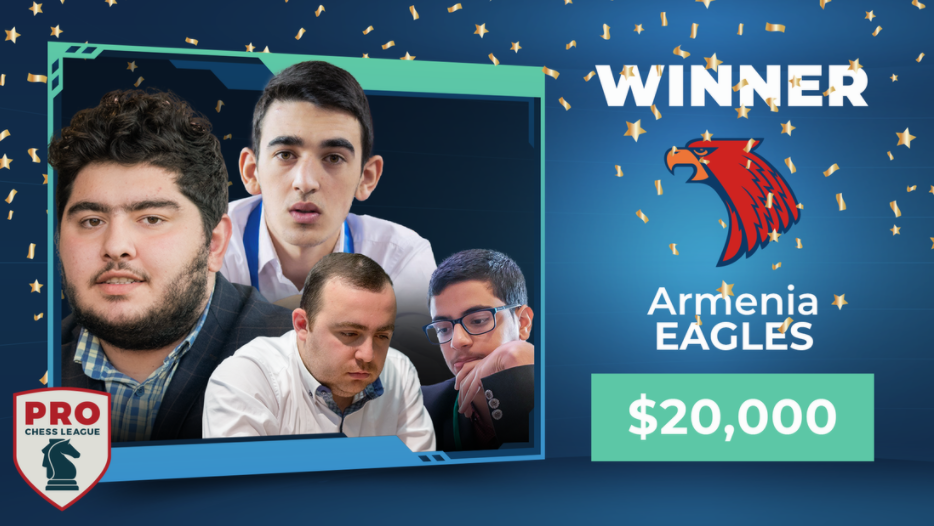 Per the league’s regular match format, each of the four players rotated opponents across four rounds of rapid G/10+2 games. Dealing the heaviest damage on Sunday was Eagles top board GM Tigran Petrosian, who delivered a stunning performance to score 3.5 points against the four Americans. In fact, Xiong was the only player to avoid defeat at Petrosian’s hands after playing to four draws on Sunday, though even he was losing in the endgame before the Armenian star misstepped in time trouble.

So, who finished as the PRO League’s 2020 performance leader with a rating of 2825 and 24.5 points across 32 games this season, scored 2.5/4 on Sunday as the only Arch Bishop to finish with a positive score.

It was not the best of days for Caruana. The World No. 2 – back online after his return to the physical board in Germany last week – piled on his second-round defeat by Petrosian with yet another loss to 2018 world junior champion GM Parham Maghsoodloo in the fourth round. Caruana finished 1.5/4.

Though his result of that final game wouldn’t directly sway the overall match outcome, in real time on Sunday Caruana’s loss came through as the championship clincher for Armenia. The Arch Bishop had an advantage in the game with long-term plans to shove an outside passer, but not enough short-term time to work through some heavy calculation needed for liquidation. His advantage was lost with a desperate 50. Na3, which came with only 10 seconds on his clock, while Maghsoodloo held a healthy three full minutes. Playing on instinct and only a two-second increment, Caruana pressed on despite posing no objective danger in the position, eventually dropping an important central pawn at 59. … Qxe4+ which led to collapse. The result produced a chorus of fist pumps from the Armenian team.

The PRO Chess League featured 24 international teams competing through a seven-week season that began last January, with a bracket-style post-season playoff to produce a final four teams. The 2020 final weekend was originally intended to be a live event in Oslo, Norway, though was changed to finish online due to COVID-19 restrictions. Also playing were the China Pandas and the Canada Chessbrahs, who lost to Saint Louis and Armenia respectively in semifinal matches held Friday. China went on to defeat Canada in the consolation match Sunday.

Putting a cap on the season was an announcement that the 2021 PRO League will play toward a prize fund of $100,000, twice the size of this year.