The 122nd U.S. Open began Saturday with blitz, bughouse, and bombast. Oh, and the first of nine days of serious chess kicked off as well, with a seat in the 2022 U.S. Championship at stake!

Saturday saw a number of traditionally popular side events before the five Invitationals and Open get started. Among these are the Weeramantry Blitz Tournament of State Champions and the ever-popular Bughouse! 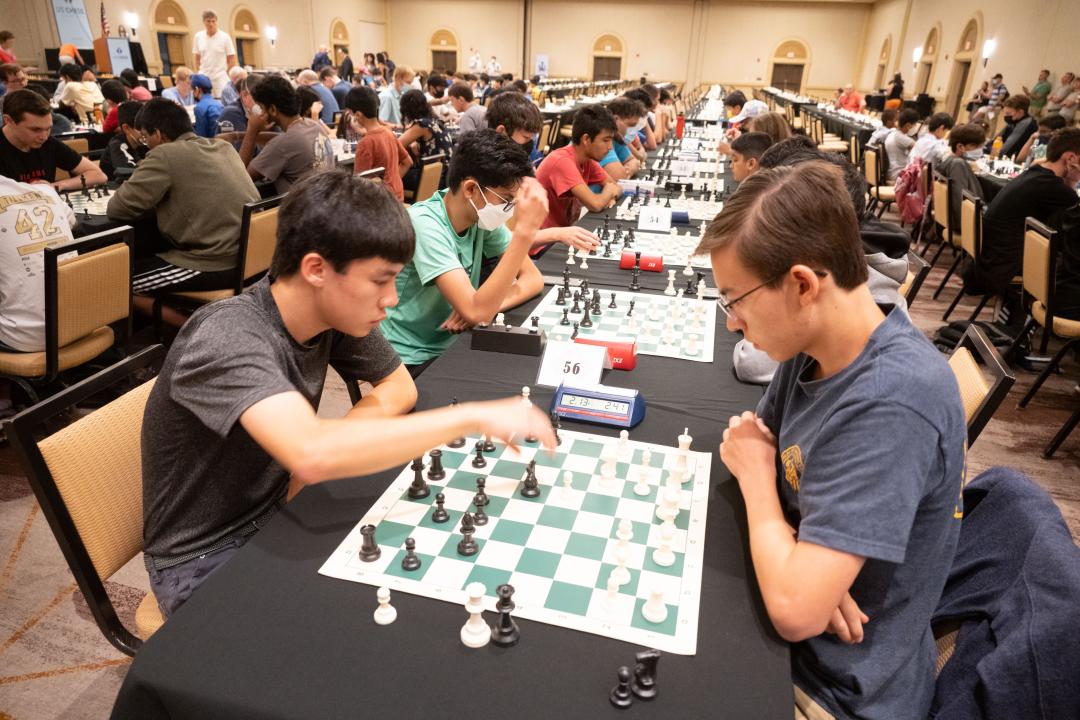 While results are still tricking in (for those of us off-site, anyway!) for the Weeramantry Blitz, we do have winners in the Bughouse. Congratulations to the team of Leo Jiang and Kitana Olson, who scored 9/10 to take first place by a point over second-place siblings Anish Lodh and Anjali Lodh.

Sunday sees the completion of the two-day Weekend Swiss and the one-day Scholastic. We’ll have results as they are available! 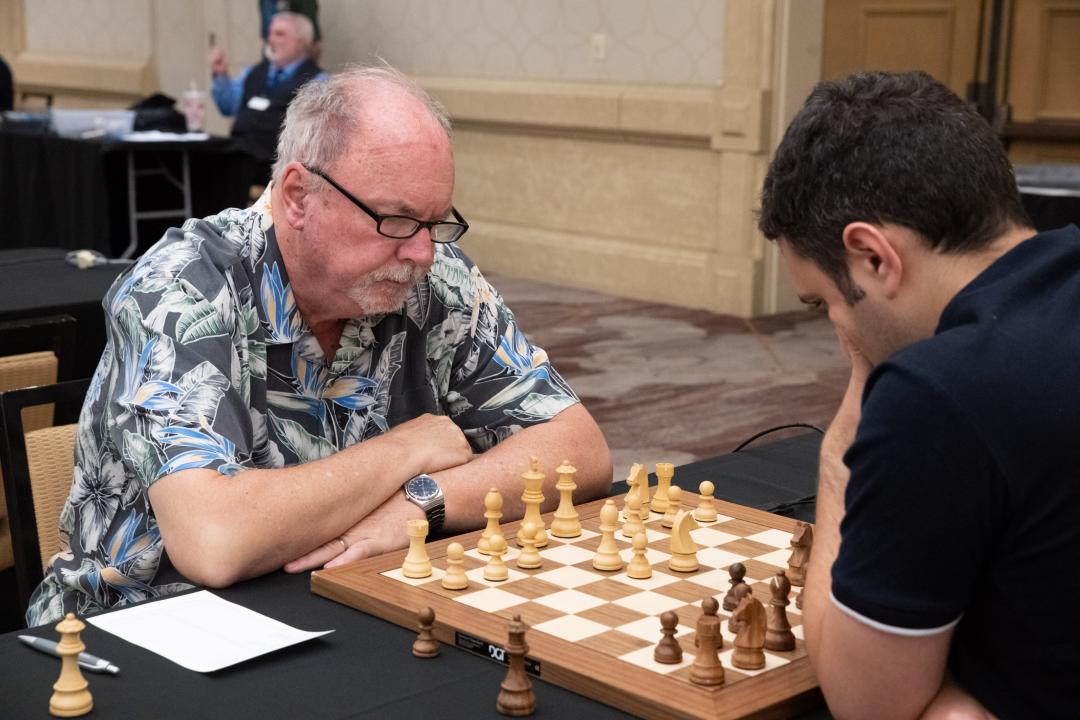 A hardy cohort 129 players settled in for the long-haul with the first round of the nine-day classical schedule of the Open. The lone GM in the nine-day, Elshan Moradiabadi, won a nice miniature.

The other top seeds managed to avoid any serious upsets in a first round where most pairings saw a 600-point rating gap between players. While the invitationals appeared to follow a similar trajectory of mismatched pairings and very few upsets, the games themselves revealed far more tension and competitive spirit. 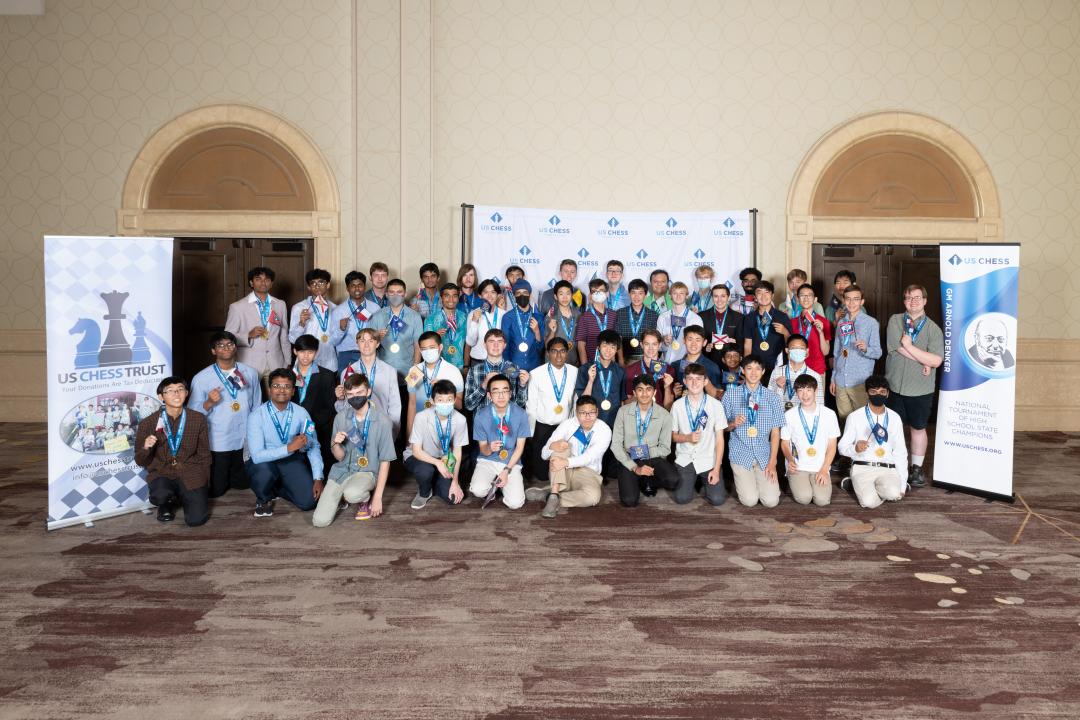 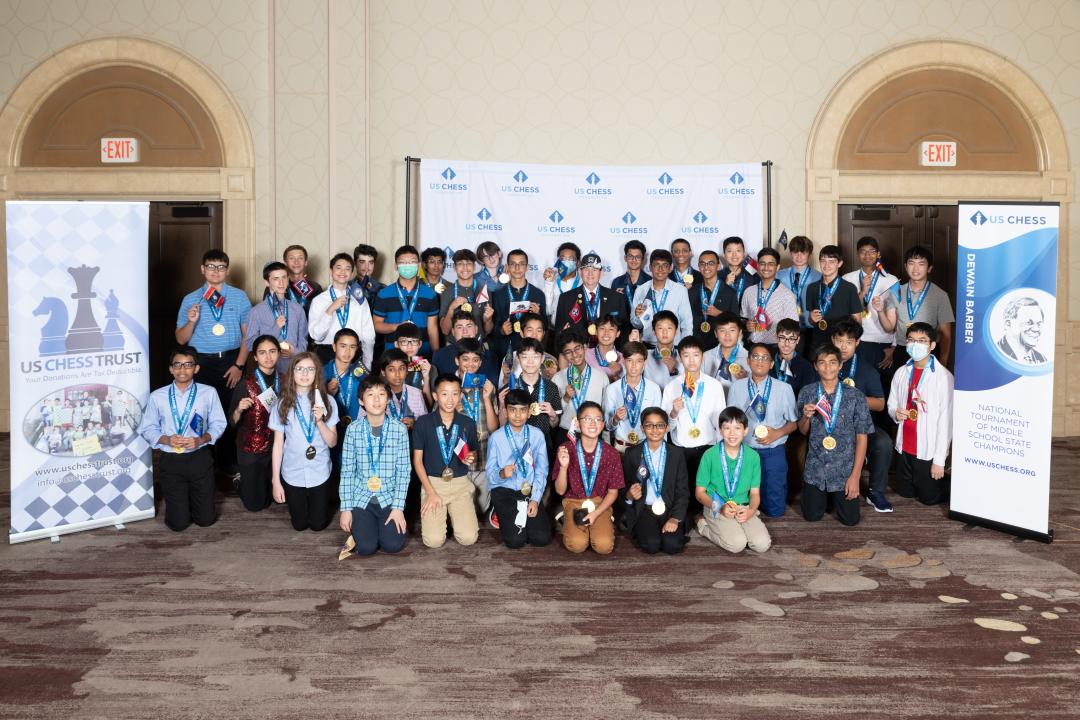 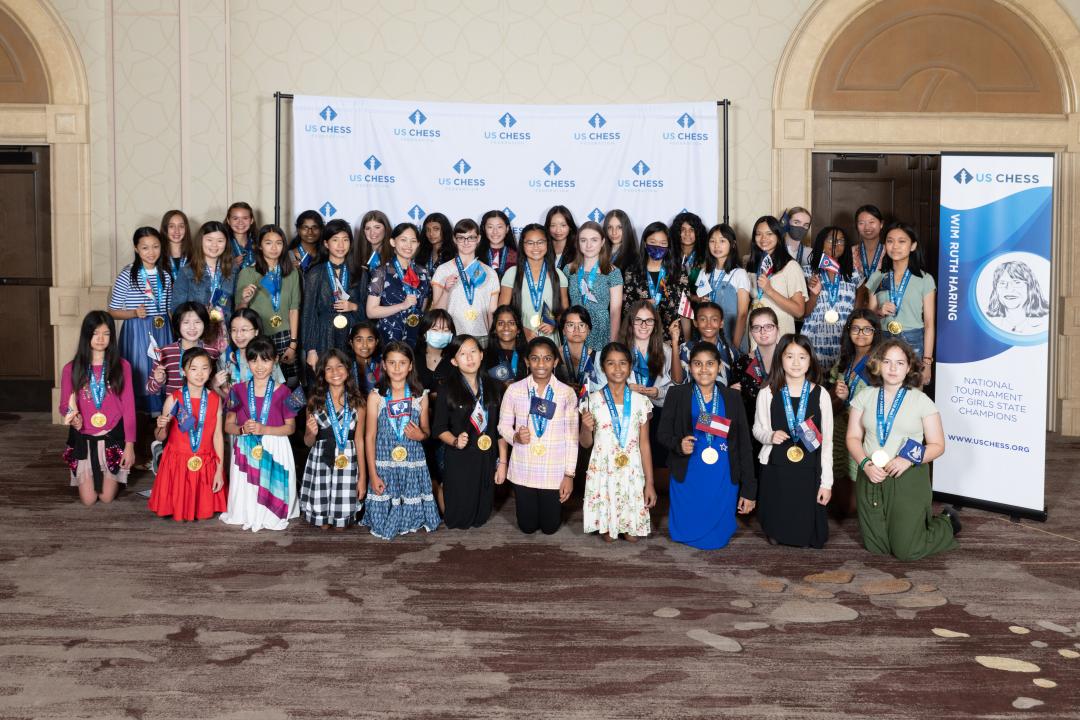 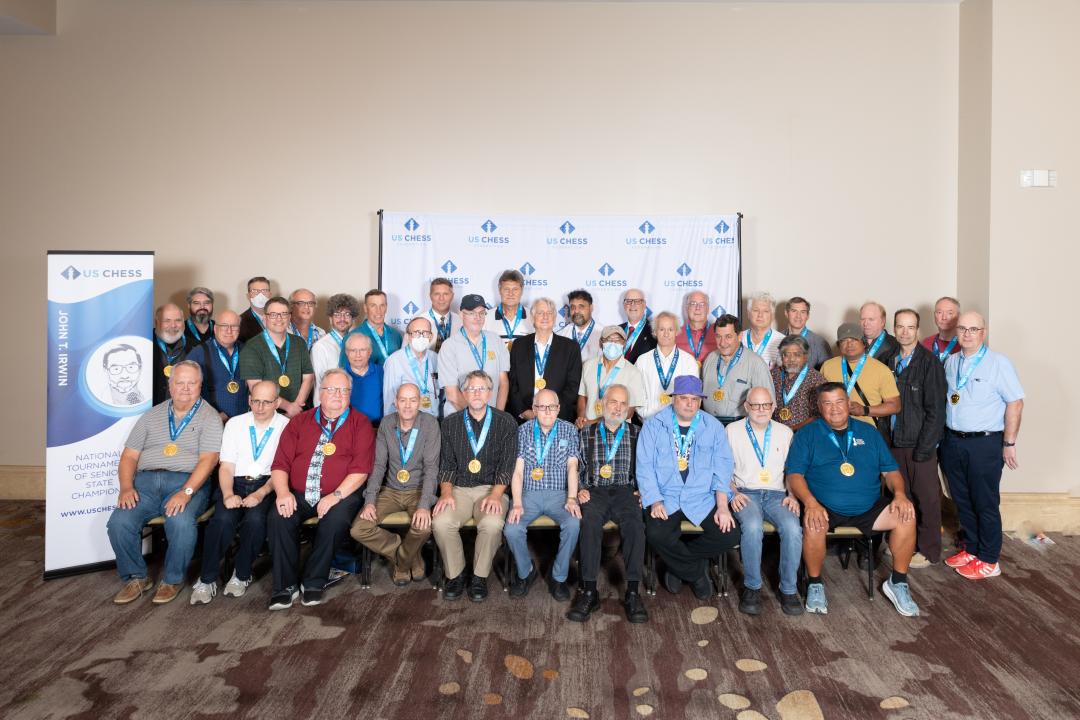 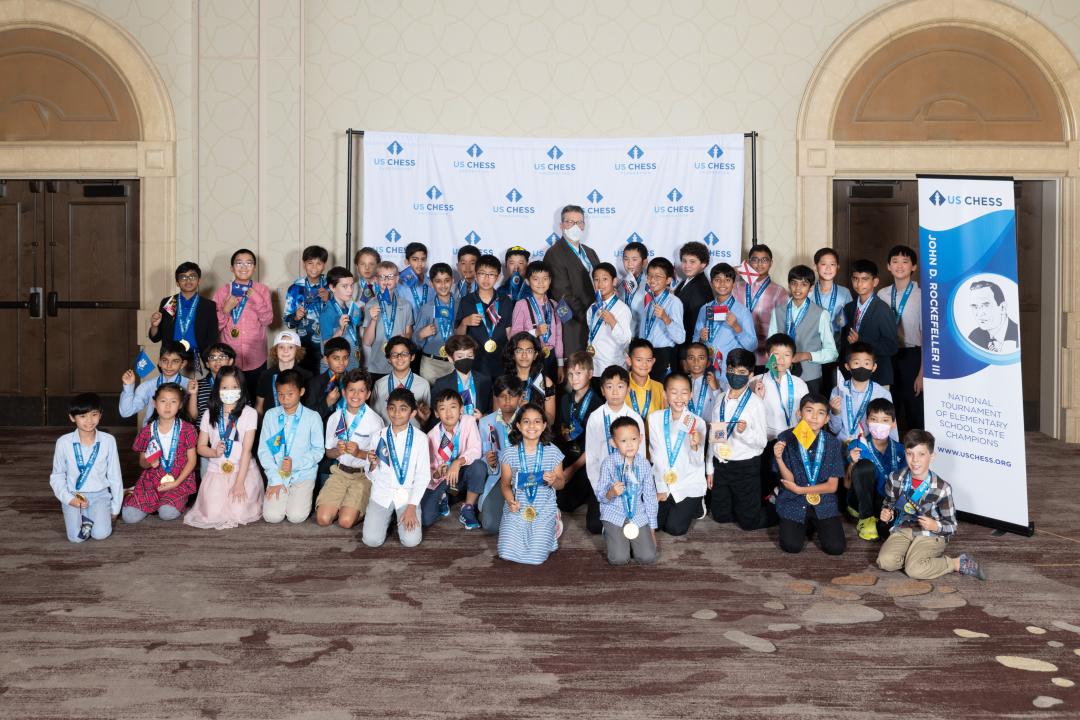 In the Denker Tournament of High School Champions, Idaho’s Niall McKenze (1718) scored a 460-point upset over Wisconsin’s Hersh Singh (2178), but this was the lone upset. GM Andrew Hong, representing Northern California, sits atop the standings alongside IMs Arthur Guo (GA), Eddie Tian (NJ), and Anthony He (WA), a smattering of FMs and countless masters and experts. Tian’s win over South Carolina’s Jacob Stoll started off lopsided in the IM’s favor, but Stoll showed great resilience until one ill-timed trade reignited Tian’s attack.

The Haring Tournament of Girls Champions saw even more drama as Nebraska’s Jacey Tran made top-seeded FM Alice Lee work harder than most 2359-rated FMs would expect to work against a 1528. 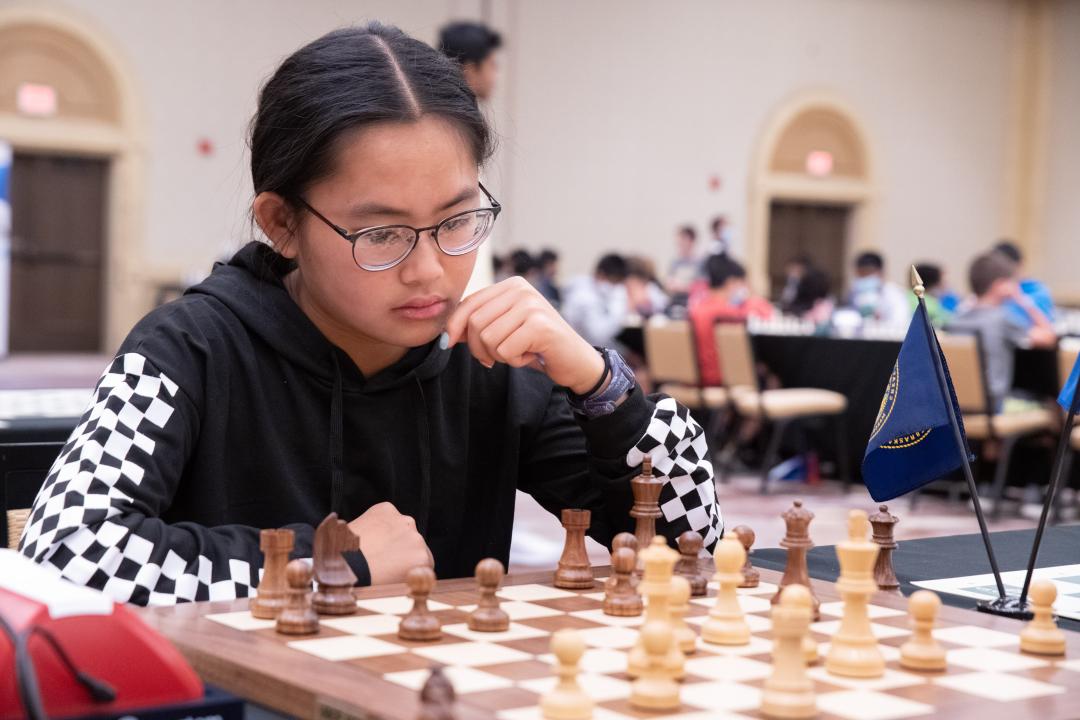 But Tran defended a precarious position admirably, mixing calm defense with well-timed counterplay for most of the game before making one error in calculation.

There was something eerie about watching the battle on the top board of the Irwin Tournament of Senior Champions play out exactly the same way as Lee’s win over Tran. In a Red River Shootout, Texan IM Douglas Root faced principled, patient play from Oklahoma’s Thomas Braunlich. Root kept the initiative throughout, but had trouble finding anything concrete until Braunlich made one mistaken decision about queenside pawn structure, sticking him with weaknesses on both sides of the board exactly like in Tran’s game. It’s gratifying enough watching this game being played by juniors and seniors alike, but watching games be won and lost the same methodical, positional way across the generation adds even more.

For the Barber Tournament of Middle School Champions, Floridian FM Bach Ngo and Pennsylvania’s Erick Zhao top the standings along with most of the expected winners and one surprising name. The biggest upset of day one occurred when Vermont’s Elijah Cummings, rated 585, took down 1783-rated Harsh Mali from Colorado to join the leaders in the Barber. There were no upsets in the Rockefeller Tournament of Elementary Champions, but with the majority of the winners being rated between 1800 and 2100 US Chess, there will be plenty of great games in the next few rounds.

In the scholastic invitationals, the participants are also competing for scholarship money. The first place finisher in each event will receive a $5,000 college/university scholarship. Second and third place finishers will receive $3,000 and $2,000, respectively. Details on these and other awards can be found on all the event webpages (USChess.org-->Play-->National State Invitationals) and in the opening/closing ceremony program.